The pandemic is a unifier, not an excuse to deepen divisions
Bobby Naderi 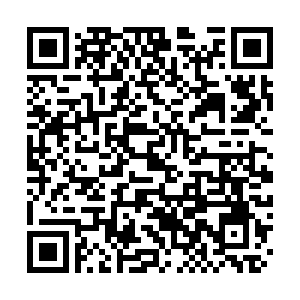 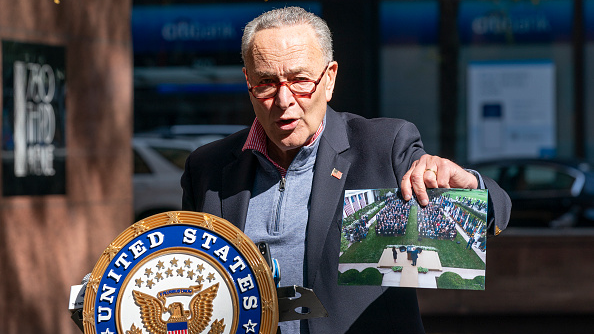 U.S. Senator Chuck Schumer holds up a picture of the Rose Garden ceremony near the White House in Washington D.C. where most likely spread of coronavirus occurred, in his press briefing in Manhattan, New York City, October 4, 2020. /Getty Images

U.S. Senator Chuck Schumer holds up a picture of the Rose Garden ceremony near the White House in Washington D.C. where most likely spread of coronavirus occurred, in his press briefing in Manhattan, New York City, October 4, 2020. /Getty Images

It is historic that the White House is now in turmoil. The Rose Garden has become a suspected center of COVID-19 infection, and the virus has landed U.S. President Donald Trump in the Walter Reed Military Medical Center.

The 74-year-old presidential candidate is one of the millions to have contracted the infectious disease in the United States. Some analysts say with all those chaotic news conferences, handshakes and hugs in the Rose Garden and beyond, this was all expected.

More ominously, while world leaders, including Chinese President Xi Jinping and World Health Organization (WHO) Director-General Tedros Adhanom Ghebreyesus, have wished Donald and Melania Trump "a fast recovery," some U.S. lawmakers still insist that Trump's positive diagnosis should spur a potent push for some level of accountability as to where, how and why the coronavirus began.

Essentially, they rush at warp speed to conclude that the U.S. should lead the international community in pressing Beijing for "a full explanation" of what happened and why. This line of thinking will in no way ensure accountability, let alone help to avoid future pandemics. It will only complicate international efforts to contain COVID-19.

It's odd. The pandemic has the potential to be a global unifier, inspiring a notion of shared international purpose and future. Instead, the virus and Trump's hospitalization are now being used as an excuse to deliberately deepen divisions and mistrust between China, the U.S. and the wider international community.

To this end, U.S. policymakers look for global sympathy as a justification for their unilateral actions, but they are left standing alone. Their complaints, drama, victim mentality, whining and blaming, and all of their excuses and hypocrisy have not gotten them even a single step closer to their goal of isolating China anywhere in the world. 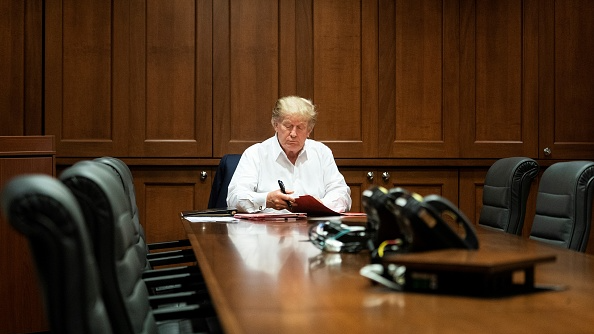 They need to let go of their nonsense, the delusion that "wearing a mask is still a personal choice," or that they deserve some level of accountability. Their rationalization does not perceive reality, yet they still seek to make reality fit their grandiose illusions.

Ironically, most governments are broadly in agreement with China about what needs to be done, especially the majority of those in Europe. They have little confidence in what they are being told by the White House – not a whit.

They refuse to politicize the matter or make excuses for their own mistakes and shortcomings. Instead, they follow the health experts and the rule of law. It can take time, but they know it will fundamentally improve the way people see them handle the international public health emergency.

Seeing that the virus is causing significant global disruptions, it's a historic blunder for the White House to dance in the storm or wait for the world to isolate China, as it will never happen. Everything the Trump administration officials have mouthed against China is null and void. It's a survey of global responses to their shenanigans.

They need to realize that the global fallout from the pandemic is no one's fault alone. It also serves no one's interest to point fingers at the United Nations or take aim at the World Health Organization. The right path is to carry out due diligence to end the bickering and blaming.

On balance, the Trump administration officials have been slow to reveal even to their own people the true scale of the threat posed by the novel coronavirus. In the words of their own health experts and physicians, the White House improperly handled the virus and lost the general public on this through incompetence. It has been less than transparent with the American public, too, both about the president's health and the virus's spread inside the White House.

Yet here is the stranger thing. Under the U.S. Foreign Sovereign Immunities Act of 1976, no sovereign state can be held to legal account for an international public health emergency. There is no evidence to suggest there was any attempt by Beijing to conceal or distort information about the pathogen. Beijing also owns no burden of obligation under international law.

It's an even uglier world out there. It was Trump's "America First" policy that forced Washington not to advocate for international cooperation in fighting the pandemic. Just as important, this is why many American experts, medical professionals, and lawmakers hit back at the Trump administration for pointing the finger at China.

They maintain that "the administration's own mismanagement and dishonest conduct coupled with a refusal to initiate formal lockdowns or a mandated mask policy" are the reasons many Americans lost their lives and many more were infected. Indeed, behind all the political posturing, the White House is more to blame than they think.

Regardless, it's never too late for the Trump administration to change course. This includes reviewing all of their actions related to the pandemic and China. The Trump administration stands to win if it stops describing the pandemic "as a nuisance, exaggeration or an outright hoax." The Trumpsters need to end the virulent assault on China and the hypocrisy they have been playing out to hide their failures.

The bottom line is this: Trump's positive diagnosis, including the first lady and a growing number of people in his inner circle, could be a watershed in a COVID-19 world that always seems to be teetering at the edge of apocalypse. U.S. lawmakers can be historians of this moment, too.

This crucial moment has the potential to offer a historic opportunity for both Beijing and Washington to take the virus more seriously and usher in greater security and stability. The two major powers can join hands with the United Nations and the WHO to develop global testing and tracing operations. They can further contribute to an international vaccine cooperation fund for the benefit of all humanity.