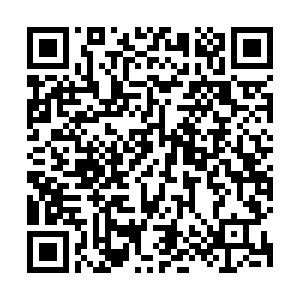 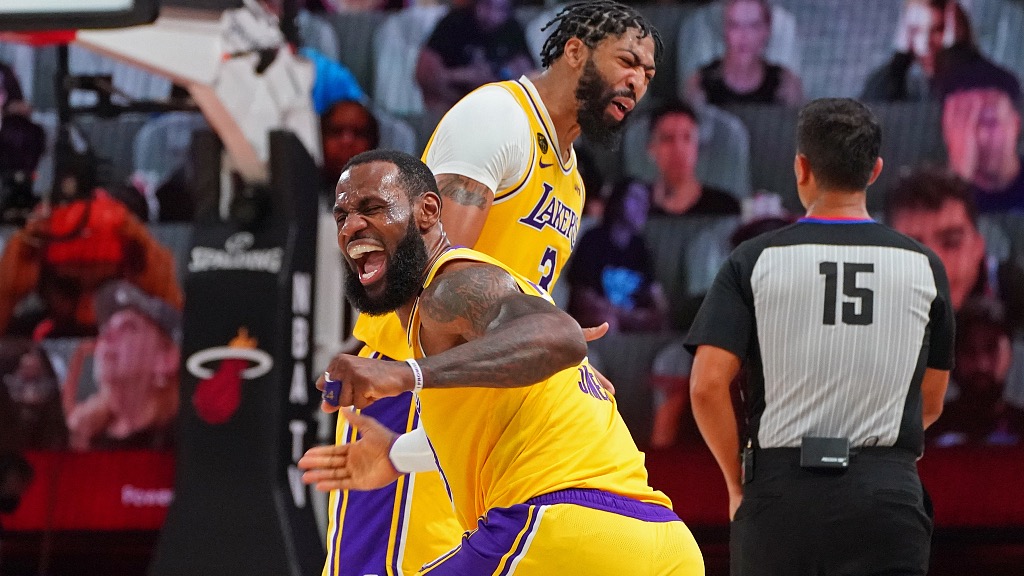 LeBron James #23 and Anthony Davis #3 of the Los Angeles Lakers yell and celebrate during Game Four of the NBA Finals against the Miami Heat, Florida, U.S., October 6, 2020. /VCG

LeBron James #23 and Anthony Davis #3 of the Los Angeles Lakers yell and celebrate during Game Four of the NBA Finals against the Miami Heat, Florida, U.S., October 6, 2020. /VCG

LeBron James scored 28 points as the Los Angeles Lakers moved to within one win of a 17th NBA championship on Tuesday with a 102-96 victory over the Miami Heat.

Humbled by Miami in game three on Sunday, James and the Lakers came roaring back in a hard-fought defensive battle that was finely balanced until Los Angeles pulled away in the closing minutes.

The win leaves the Lakers 3-1 up in the best-of-seven series, meaning they can clinch the championship with victory in game five in Orlando on Friday.

"It felt like both teams were desperate, understanding the situation they had put themselves in," James said afterwards.

"Trying to get every extra possession, execute offensively, not to make mistakes defensively, that's what it was all about."

James started slowly but clicked in the second half to lead the scoring while providing eight assists and hauling down 12 rebounds.

Anthony Davis meanwhile finished with 22 points, while Kentavious Caldwell-Pope chipped in with a vital 15 point contribution.

Caldwell-Pope's tally included a three-pointer and a layup in the closing stages that put the Lakers seven points ahead with two minutes remaining. 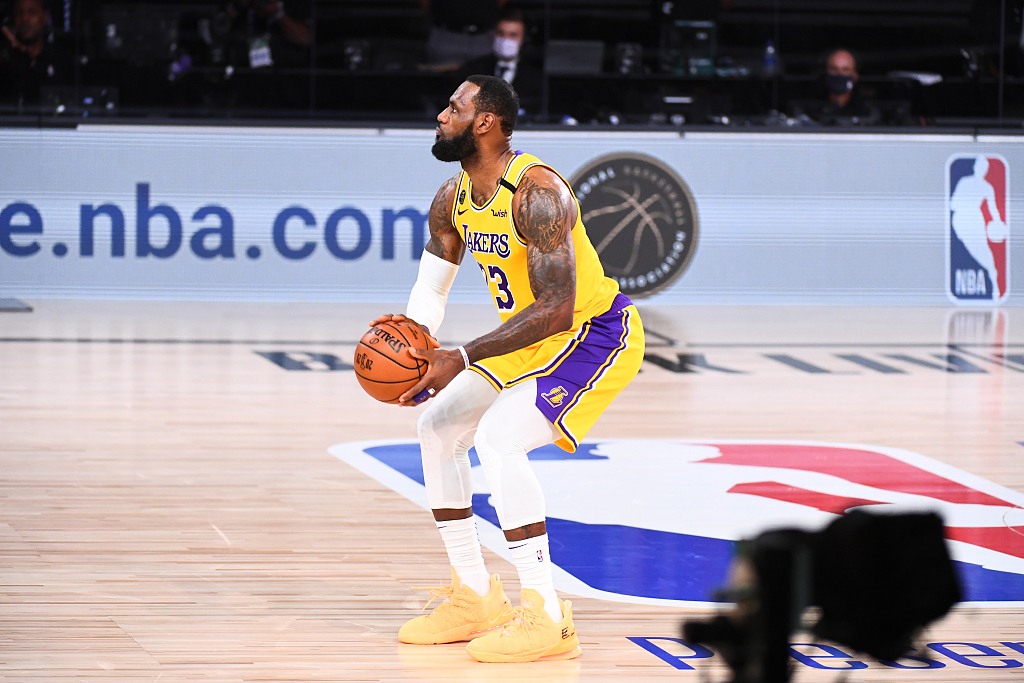 LeBron James of the Los Angeles Lakers handles the ball against the Miami Heat during Game Four of the NBA Finals, Florida, U.S., October 6, 2020. /VCG

LeBron James of the Los Angeles Lakers handles the ball against the Miami Heat during Game Four of the NBA Finals, Florida, U.S., October 6, 2020. /VCG

Davis then drained only his second three-pointer of the night with 39.5 seconds left on the clock to give the Lakers a 100-91 lead and effectively seal the contest.

Butler, the 40-point hero of Miami's win on Sunday, was restricted to 22 points, frustrated throughout by a commanding defensive display from Davis.

Miami coach Erik Spoelstra said the game had been decided in key moments in the closing stages.

"It came down to making plays. They just made more plays and more shots to seal it."

An attritional contest saw defenses on top throughout, with Miami containing the threat of James and Davis for long periods.

James in particular struggled to generate his usual rhythm throughout the first half, giving up five turnovers and scoring just eight points.

The Lakers looked to have built a head of steam towards the end of the first quarter, edging into a 27-22 lead after a Kyle Kuzma three-pointer and a driving layup from Alex Caruso.

But Miami responded swiftly at the start of the second quarter, transforming a five-point deficit into a 33-29 lead after Jae Crowder's three-pointer.

Butler, meanwhile had started smoothly, going five-from-five in the first quarter to move into double figures.

Despite Miami's defensive efforts, the Lakers were still able to carve open a series of good looks, only for off-target shooting to let them down. 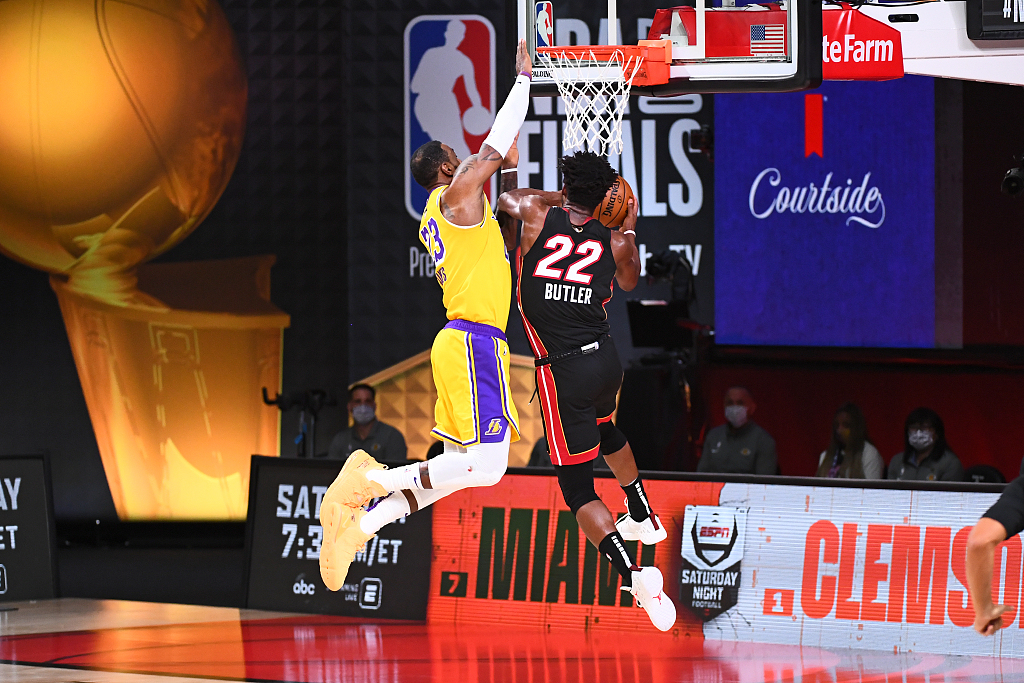 Jimmy Butler #22 of the Miami Heat shoots the ball against LeBron James #23 of the Los Angeles Lakers during Game Four of the NBA Finals, Florida, U.S., October 6, 2020. /VCG

Jimmy Butler #22 of the Miami Heat shoots the ball against LeBron James #23 of the Los Angeles Lakers during Game Four of the NBA Finals, Florida, U.S., October 6, 2020. /VCG

Nevertheless the Lakers had inched into a two-point lead at half-time at 49-47.

In the third quarter, James' shooting from distance improved, his first three-pointer of the night coming with a 29-foot effort to put the Lakers ahead at 55-54.

A Danny Green bucket was followed by a driving layup from James and the Lakers had suddenly moved into a 59-54 lead.

James made another long-range three shortly afterward to put the Lakers 62-57 up with 6:44 left in the third.

Davis's first three-pointer of the game from 28 feet put the Lakers seven points clear with two minutes left in the third.

The Los Angeles big man closed the quarter with four free throws to leave the Lakers five points clear heading into the fourth.

The Lakers maintained that advantage for much of the fourth quarter.

Tyler Herro's three-point jump shot cut the Lakers lead to one point at 76-75, but three free throws from Markieff Morris followed by a superb fadeaway from James stretched the Los Angeles cushion to six points midway through the fourth.

Butler raised Miami's hopes after tying it at 83-83, but the Lakers pulled away with Caldwell-Pope's three-pointer transition followed by a layup to make it 95-88 with two minutes left on the clock.

Rajon Rondo's layup was then followed by a Davis crucial three-pointer with 39.5 seconds left which sealed the win.