The 'awakening' of U.S. female voters and donors to political life
By Liane Ferreira 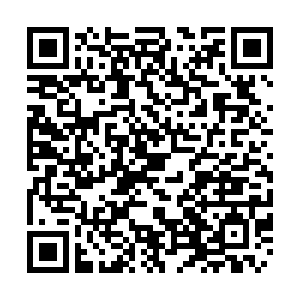 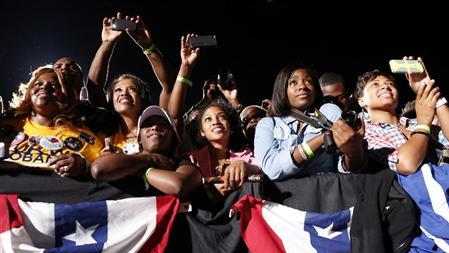 In February 2016, Former Secretary of State Hillary Clinton's presidential campaign had over 25,000 women donating $37.6 million, more than the 22,100 men who gave $37.4 million, according to the Center for Responsive Politics (CPR). It was considered a "breakdown unique among the presidential candidates" that far in the election cycle, planting the seeds for more female participation.

Four years down the road, women – who make up 54 percent of the U.S. electorate – are donating and participating more. Sheila Krumholz from the same center told NPR that the share of women donating to political campaigns registered "a pretty significant jump" from 28 percent in the 90s to 43.5 percent at the beginning of September.

As of September 28, 17 of 100 top individual donors are women, with 10 supporting the Democrats and seven backing the Republicans, according to a CGTN Digital analysis of CPR data. This is a more than two-fold jump from the 2016 election, when there were only six women who mostly supported the Republican camp.

All donations made were over $2 million each, and psychiatrist Karla Jurvetson from Silicon Valley – a Democrat – topped the list with a total of $20.88 million donated to the Liberals, in 9th place in the latest tally. Jurvetson did not appear in the 2016 donor list, but emerged as a donor only in the 2018 mid-term elections.

She was followed by Deborah J. Simon ($12.67 million), a heiress to a shopping-mall business that dislikes Vice President Mike Pence, and businesswoman Wendy Schmidt ($3.85 million), all supporters of the Democratic Party. 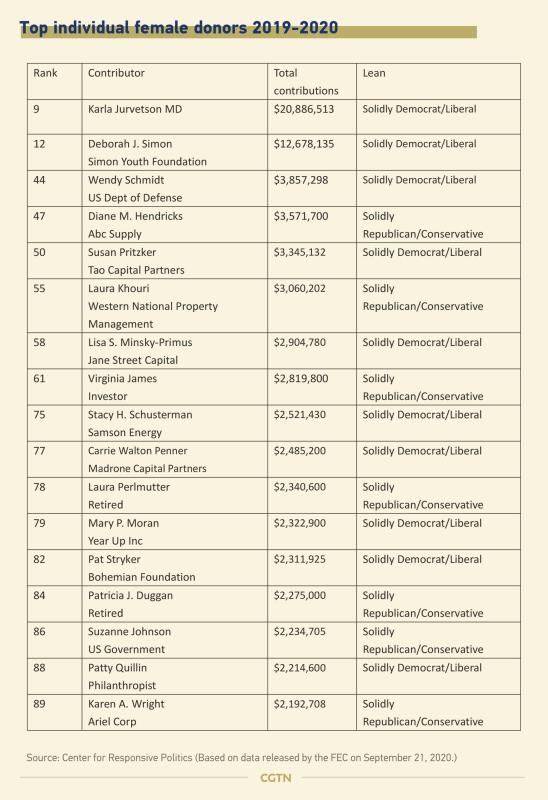 For many, the tipping point to greater political participation came during the 2016 presidential election.

"The election of Trump, especially the blatant sexism against Hillary Clinton in the 2016 campaign, really highlighted to many women how far the U.S. still has to go until men and women are considered equals in politics," assistant professor of Global Studies at Idaho State University Malliga Och explained.

"A quote I came across after the 2016 election said 'Hillary had to lose for a feminist awakening to occur' – this feminist awakening has not only resulted in a record number of women running for office up and down the ballot but also motivated women to start donating to political candidates," the academic told CGTN Digital.

Just this year alone, six female candidates threw their hat into the ring for the Democratic race, with Kamala Harris emerging as the vice president pick for Joe Biden. 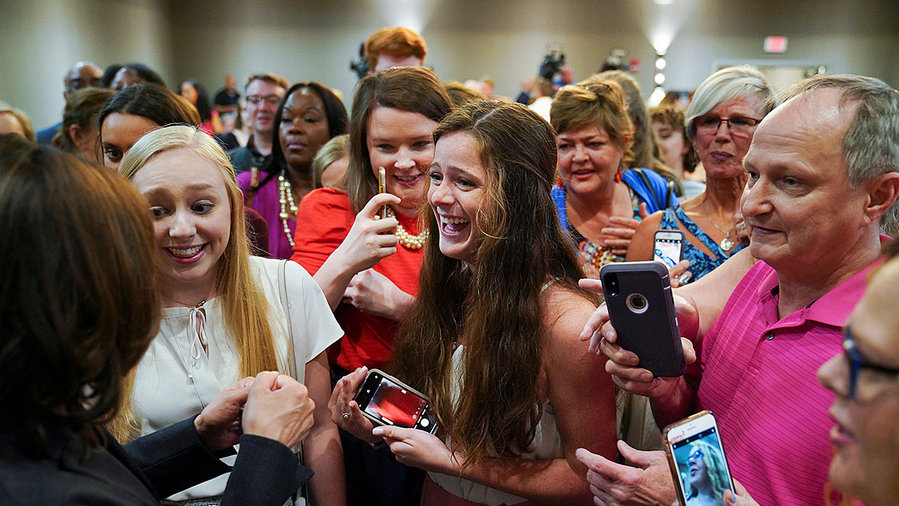 "Seeing women, especially a diverse roster of women – run for office and doing it with grace, competence, and confidence, is inspiring. The symbolic representation of women on the political stage matters," Och noted.

Furthermore, "as we look from the 1990s to today, women are increasingly likely to be employed outside the home and to be employed in occupations that offer higher salaries, which makes women more able to make donations and for some women to make larger donations," Kathleen Dolan, a professor at the University of Wisconsin Milwaukee and co-editor in chief of the American Journal of Political Science, explained, adding that donating is one of the easiest ways to be involved.

"Warren's donor base was pretty female and Kamala Harris' nomination as VP has mobilized African American women on her behalf," agreed Dolan.

In addition, Och considered that Trump and the Senate being controlled by Republicans "has demonstrated how easily progressive policies can be rolled back or overturned," creating a strong impetus for women to become politically active.

But it's not only individual donors at stake. When it comes to super PAC's (Political Action Committee), the "Women Vote!" program, affiliated with EMILY's List, an organization focused on electing pro-abortion Democratic women, counts with already $17.3 million raised by September 30, according to the Center for Responsive Politics.

On its official website, the group says it invested nearly $50 million mobilizing voters in 58 races in 2018.

After Harris' nomination, EMILY's List announced that the PAC will "help define Senator Kamala Harris with women voters," especially women of color and white women under 40, with a $5.5 million program. "As the first Black and Asian American woman to be nominated for vice president, Harris is positioned to break glass ceilings and inspire voters across the country," the List announced. 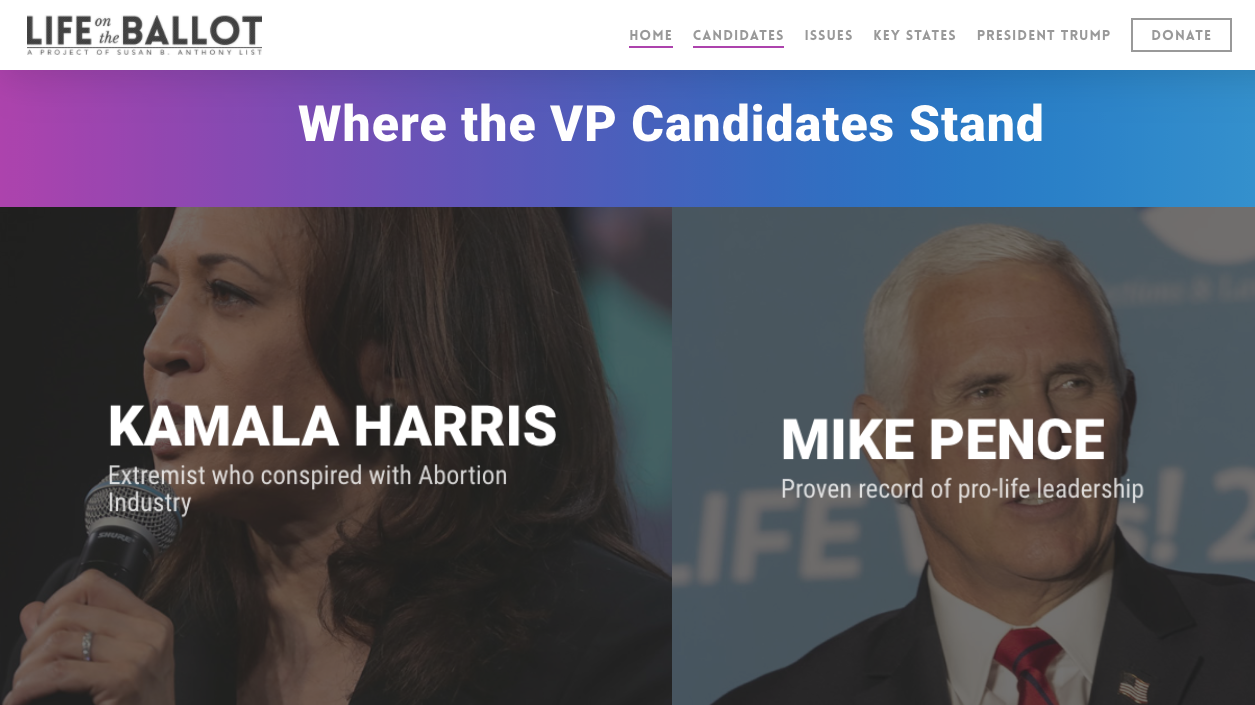 Screenshot of SBA Lst website "Life on the ballot"

Screenshot of SBA Lst website "Life on the ballot"

On the other side of the political spectrum is "Women Speak Out," an anti-abortion super PAC created by national pro-life group Susan B. Anthony List (SBA List), that has raised $9.5 million for this election cycle and aims to promote pro-life women leaders.

The group has declared its support for President Trump and Vice President Pence, a pro-life ticket, and on September 9 announced a $52 million budget to reach voters. "Abortion extremism has been, and will continue to be, a loser at the ballot box," a press release from the SBA List reads.

For Och, "it is important to note that being a woman does not translate to being a feminist or progressive woman. Women are not a homogeneous group and there are plenty of conservative women who support Trump and the GOP." 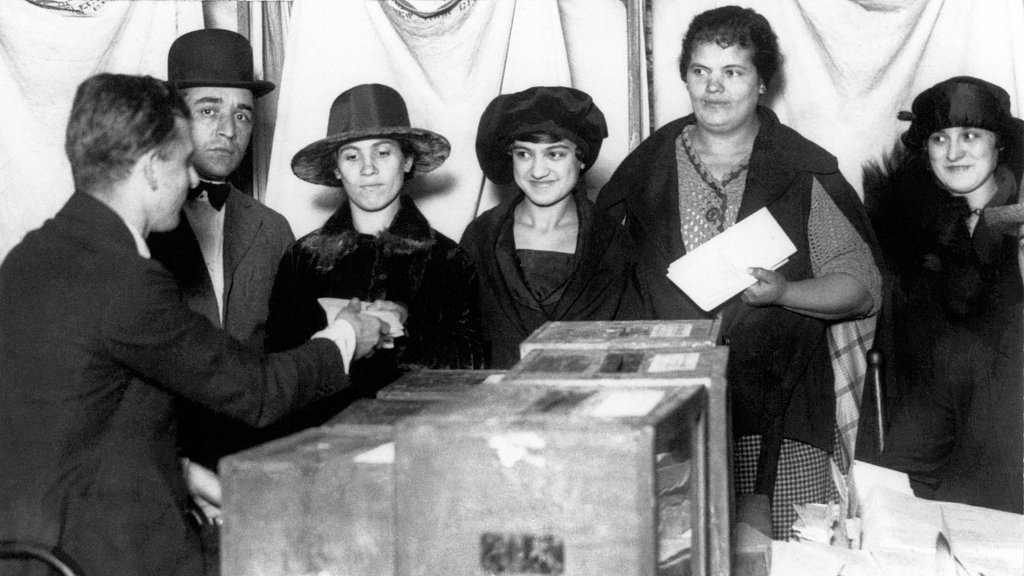 Women line up to vote for the first time in New York after the passage of the 19th Amendment, New York, New York, 1920. /Underwood Archives/Getty

Women line up to vote for the first time in New York after the passage of the 19th Amendment, New York, New York, 1920. /Underwood Archives/Getty

This year marks the 100th anniversary of women securing their right to vote in the U.S. and both scholars admit that much more needs to be done, specifically in terms of representation for women of color.

"The Equal Rights Amendment needs to be ratified, the pay gap needs to be addressed, and women still are largely underrepresented in politics across all levels. These issues are particularly pressing for women of color who are affected by both gender and racial discrimination," Och said, noting that this leads to greater inequalities.

For Dolan, there needs to be changes in candidates' recruitment to include more women, particularly of color. "We also need to work for more equitable divisions of family life so that women don't continue to bear a greater burden for home life."