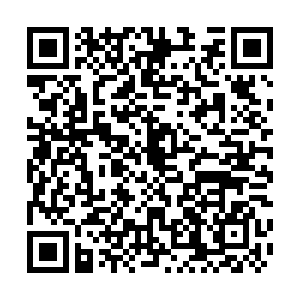 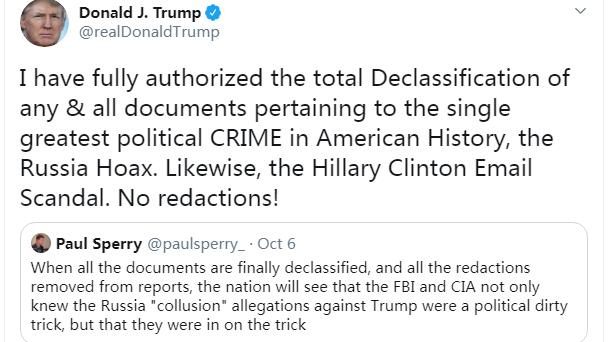 Screenshot of U.S. President Donald Trump's Twitter saying he has authorized declassification of documents related to the investigation of Russian interference in the 2016 U.S. elections and the files related to former U.S. Secretary of State Hillary Clinton's email controversy.

Screenshot of U.S. President Donald Trump's Twitter saying he has authorized declassification of documents related to the investigation of Russian interference in the 2016 U.S. elections and the files related to former U.S. Secretary of State Hillary Clinton's email controversy.

Trump's decision to authorize the total declassification of all documents related to the "Russiagate" and Hillary Clinton's emails have combined with his recent downplaying of COVID-19 to create a riskier re-election gamble.

The incumbent is basically telling Americans that he couldn't as much done during his first term as he wanted to because of the two events that are completely beyond his control, which he portrays as Democrat-driven conspiracies against him.

On the one hand, Trump never stops boasting how much he "Made America Great Again" over nearly the past four years, yet on the other, he's acting as if he didn't accomplish all that much.

This narrative contradiction can be rectified if one accepts that he could have been even better (from the perspective of his supporters) had he not been stopped every step of the way by the "Russiagate"- influenced Democrats and the COVID-19 virus, the latter of which he claims has been politicized by his opponents to destroy the economy and ruin his re-election.

His re-election gamble is so risky because it implies that he tacitly recognizes that his record isn't as spectacular as he presents it as being both to supporters and critics alike.

He was unable to implement every facet of his ambitious campaign platform because of resistance within his own party from what his supporters describe as RINOs (Republicans In Name Only) allied with the Democrats.

Trump needs to win their constituents' support otherwise he stands no chance of beating Biden. This explains why he's declassifying everything at this time.

His COVID-19 narrative serves a similar purpose. Not only is it intended to galvanize his base, but it's also meant to dissuade on-the-fence voters from supporting the Democrats.

Many Americans have been adversely affected by the country's lockdown, especially economically, so making it seem like these measures were unnecessary and/or politically exploited by the opposition is supposed to turn them against Biden. If they won't vote for Trump, then he'd rather that they just sit this election out instead.

Trump's strategy seems to be to overwhelm Americans with a flood of information about "Russiagate" and COVID-19 at the last minute before they have the time to deeply consider everything that he's saying.

It's in his interests to make voters doubt his rivals' narratives that he's a "Russian puppet" and that his response to the pandemic is responsible for over 200,000 American deaths. 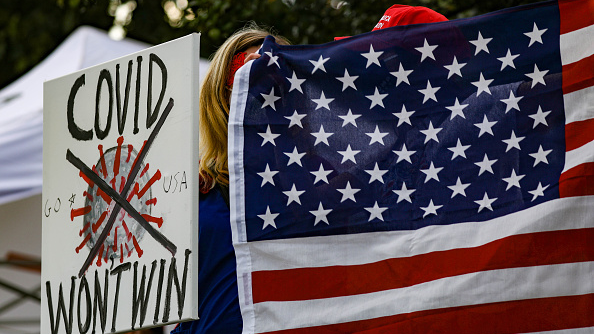 Supporters of the U.S. President Donald Trump rally outside of Walter Reed Medical Center to show their support in Bethesda, Maryland, the U.S., on October 5, 2020. /Getty Images

Supporters of the U.S. President Donald Trump rally outside of Walter Reed Medical Center to show their support in Bethesda, Maryland, the U.S., on October 5, 2020. /Getty Images

As long as a so-called "plausible doubt" exists, then some people might not vote for the Democrats if they're unsure about whether they're morally in the right.

Other Americans, however, might be more energized to vote for Trump if they're convinced that he's truly the victim of these dual Democrat conspiracies like he claims.

There's a lot of grassroots resentment against what he calls "the swamp", and objectively speaking, the Democrats have indeed obstructed a lot of his proposals for purely political reasons that often times don't have much relevance to the topics of discussion.

Most health professionals agree that COVID-19 is very dangerous for individuals with preexisting conditions and that it can be spread by asymptomatic carriers to this vulnerable segment of the population. That, at least officially, was one of the justifications for the U.S.' lockdown.

The more confused they get, the more likely they are to either vote for Trump or sit the election out.

It can therefore be said that the Democrats dug their own political hole by trying to exploit racial unrest over the summer despite condemning Trump for being the one who didn't take COVID-19 seriously enough.

If Trump's risky "Russiagate" and COVID-19 tactics succeed, then the Democrats won't have anyone to blame but themselves.