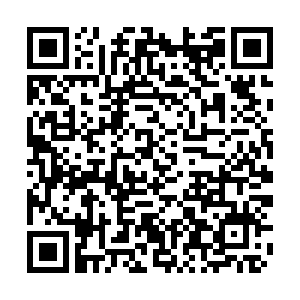 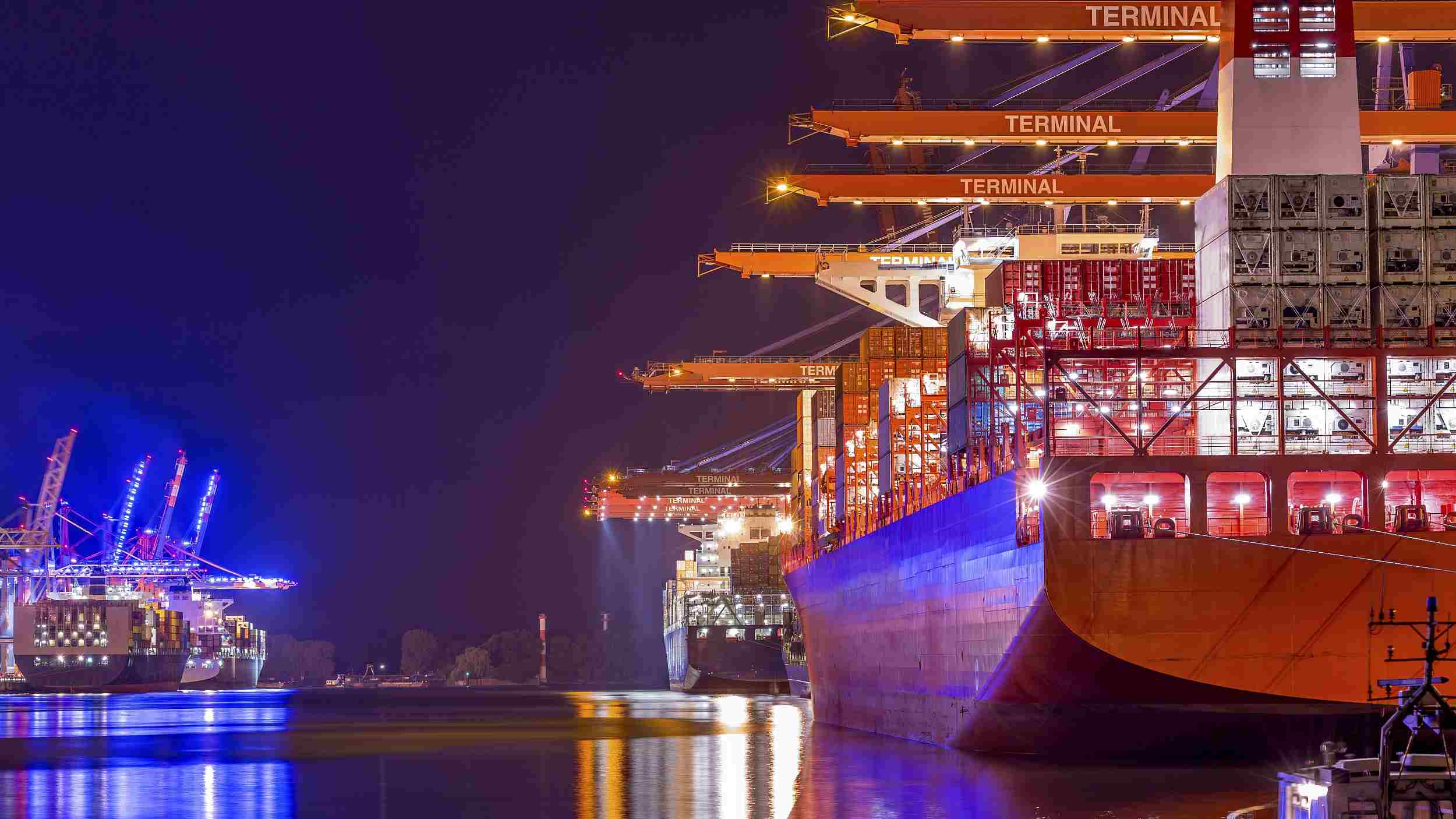 China on Tuesday reported robust growth in foreign trade in September, with exports and imports in U.S. dollar terms rising 9.9 percent and 13.2 percent respectively from a year earlier, as demand from trading partners recovered strongly after the lift of coronavirus restrictions.

J.P. Morgan Chief Economist Zhu Haibing told CGTN that China outperformed global trade as the country was one of the few countries that began recovering on the production side.

Exports in September were extended from a solid increase of 9.5 percent in August. The strong gains were broadly in line with the Reuters forecast of 10 percent.

The country's imports in September rose at a fastest pace this year, returning to growth from a drop of 2.1 percent in August and much better than the Reuters prediction of a 0.3-percent increase.

Data from the World Trade Organization shows that China's foreign trade accounted for 12.6 percent in global trade, up 1 percent from the same period of last year. Both exports and imports hit a record high share in global trade.

"China takes advantage of its 'first in first out' from the pandemic," says Zhu. "China is one of the few countries where production side first recovered, much earlier than the rest of the world."

Analysts from Nomura echoed Zhu's view, and predicted that "China's export could remain elevated for another couple of months."

China's exports benefit from medical supplies and "stay-at-home" items that are in strong demand from countries affected by the pandemic. The two categories contributed 2.2 percent and 1.2 percent respectively to export growth in the first three quarters.

In addition, export of made-in-China electromechanical products edged up in terms of its share in the total export value. The customs authority says that's an optimization in China's export structure.

Zhu says China's production-led recovery differs from the consumption-led recovery seen in other countries like the U.S. "So that created a discrepancy and China filled into the market gap," said Zhu. "that's probably a more important story behind a very strong export read.” 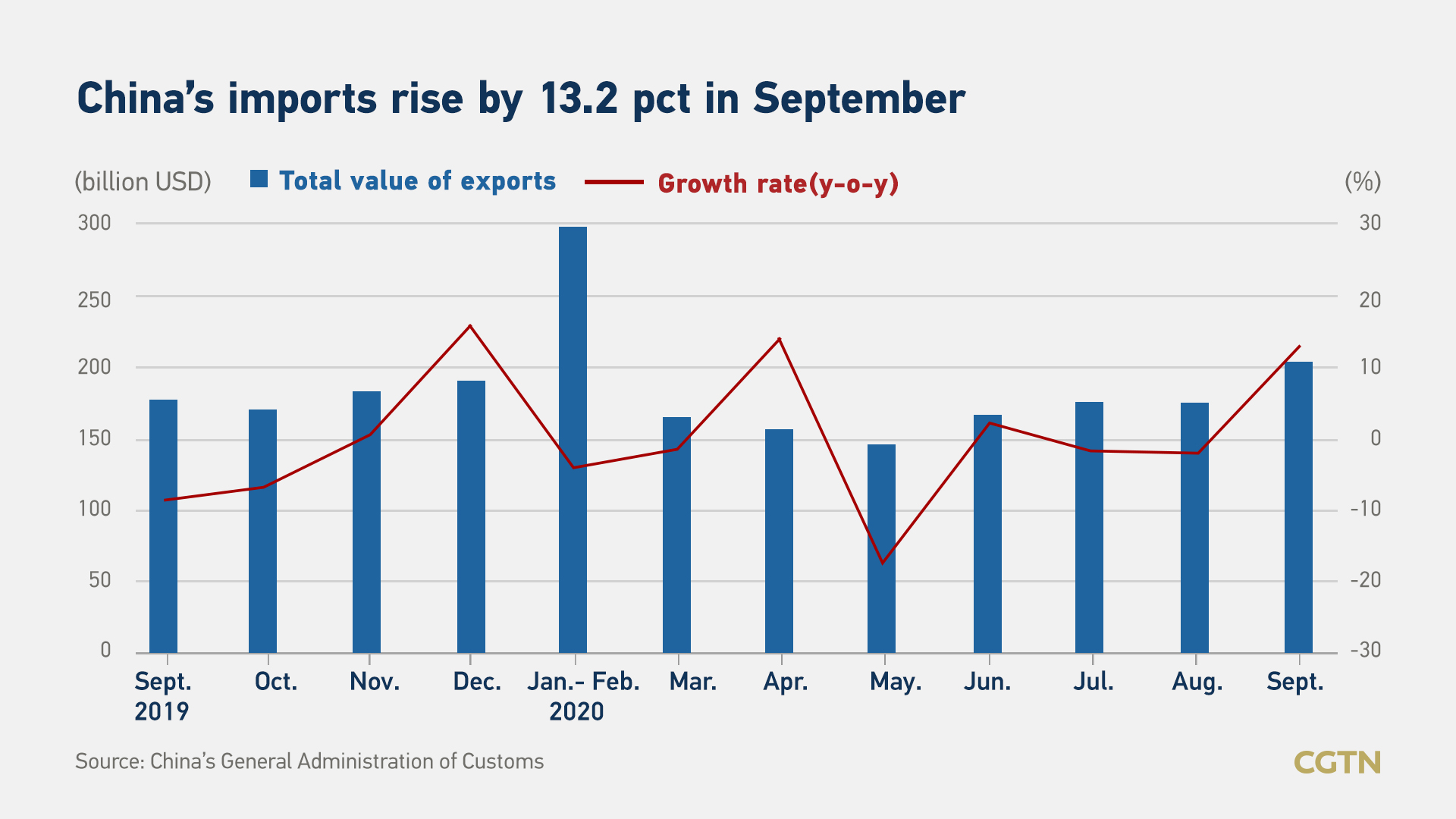 The improvement in China's import suggests "stronger domestic demand" in China, according to analysts from Nomura.

"The overall trade performance seems to suggest that China's dual circulation strategy has withstood the test," she added.

Wang said demand from US, Europe and ASEAN all recovered strongly, not only in medical devices, but also in electronics and electric machinery.

She explained, "This is partly due to the furlough scheme in western countries that have supported workers' income and spending. We expect the foreign demand to stay strong in the fourth quarter with the holiday season boost."

China's trade surplus with the U.S. stood at $30.75 billion in September, narrowing down from a surplus at $34.24 billion in August, according to Chinese customs data.

For the first nine months of the year, the country's trade surplus with the U.S. totaled $218.57 billion, customs data showed.

"Trade surplus with the US also shrank, driven by China's active purchase of the US agricultural and energy products. This suggests China's good will to fulfill its commitment of the phase one trade deal," Wang told CGTN.

Despite the ongoing trade war and strained U.S.-China relations, growth of exports to the U.S. ticked higher to 20.4 percent year-on-year in September, the highest reading since June 2012, up from 20 percent in August.

China saw its foreign trade rise by 0.7 percent year on year in the first three quarters of 2020, with exports growing by 1.8 percent and imports falling by 0.6 percent, Chinese customs data showed.

Third-quarter imports and exports increased by 7.5 percent to 8.88 trillion yuan, as China's foreign trade has been recovering quarter on quarter and is now registering positive cumulative growth.

Foreign trade with ASEAN, China's largest trading partner, registered 3.38 trillion yuan, with an increase of 7.7 percent, accounting for 14.6 percent of the country's total foreign trade volume. It is followed by trade with the EU, the U.S. and Japan, up 2.9 percent, 2 percent, and 1.4 percent, respectively.

Growth of exports of electro-mechanical products re-entered positive territory and exports of supplies to combat COVID-19 grew fast. Exports of medicines and pharmaceutical products increased by 21.8 percent and those of medical equipment by 48.2 percent.

The private sector is playing a more prominent role in stabilizing foreign trade. Imports and exports in the sector increased by 10.2 percent to 10.66 trillion yuan in the first three quarters, accounting for 46.1 percent of the country's total foreign trade volume, 4 percentage points higher year on year.

Imports of bulk commodities such as iron ore, crude oil, coal and natural gas, and key agricultural products like soybeans and meat all increased. Imports of iron ore were up 10.8 percent, crude oil by 12.7 percent, soybeans 15.5 percent, and pork by a remarkable 132.2 percent.