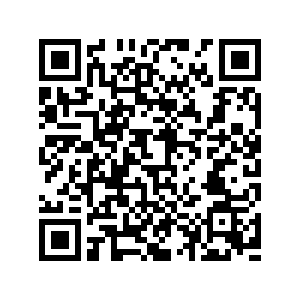 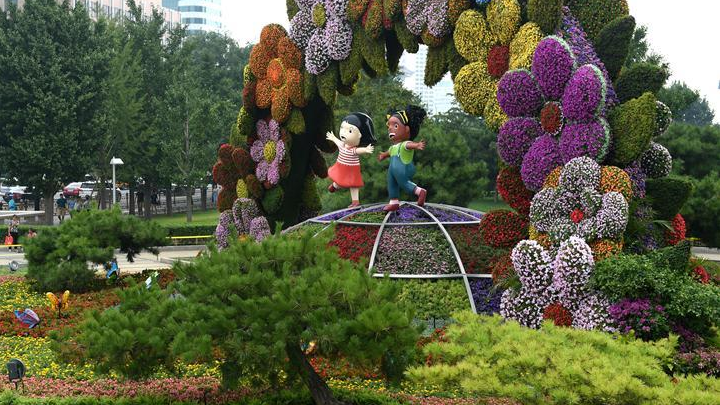 A parterre to greet participants at the 2018 Beijing summit of the Forum on China-Africa Cooperation (FOCAC), is displayed in Beijing, August 28, 2018. /Xinhua

A parterre to greet participants at the 2018 Beijing summit of the Forum on China-Africa Cooperation (FOCAC), is displayed in Beijing, August 28, 2018. /Xinhua

Editor's note: Wang Huiyao is the president of the Center for China and Globalization. The article reflects the author's opinions, and not necessarily the views of CGTN.

This year marks the 20th anniversary of the Forum on China-Africa Cooperation (FOCAC). Over the past two decades, by working closely together, China and Africa have unleashed growth potential, expanded cooperation, addressed various challenges and implemented significant agreements.

Africa is a rising continent. Its large and growing population means the continent is endowed with abundant human resources and considerable consumption potential. Urbanization and modernization continue to create new business opportunities.

The African Continental Free Trade Area (AfCFTA), which entered into force in 2019, is also seen as a bright spot.

Over the past year or so, AfCFTA has made steady progress despite challenges and is expected to cover 1.2 billion people among 54 countries. If implemented fully, it could boost Africa's income by $450 billion by 2035, according to a World Bank report published in July.

Under the old international division of labor, African economies had tended to be stuck at the lower ends of global value chains for a long time due to insufficient funding and technical support that hindered local development. In recent decades, local dynamism together with increased foreign investment and cooperation has helped to catalyze the transformation of African economies.

Amidst the wave of digitalization, more firms are adopting globalization strategies targeting the African market. The continent holds great potential for development and is expected to develop into the next "factory of the world."

China and Africa have huge potential for cooperation as the two differ in comparative advantages and levels of industrialization. China's trade with Africa increased 20-fold from $10 billion in 2000 to some $207 billion in 2019 under the framework of FOCAC and the Belt and Road Initiative (BRI). Over 3,700 Chinese enterprises have invested and started businesses across Africa, providing a strong driving force for sustained regional economic growth.

In the context of current Sino-U.S. tensions, exploring new markets in Africa is a promising pathway for Chinese enterprises "going global," despite various challenges such as lack of deep knowledge of local realities and gaps in infrastructure and talent. Overcoming these obstacles requires governments, enterprises and industry associations to cooperate in building more platforms and launching supporting policies and safeguard measures. 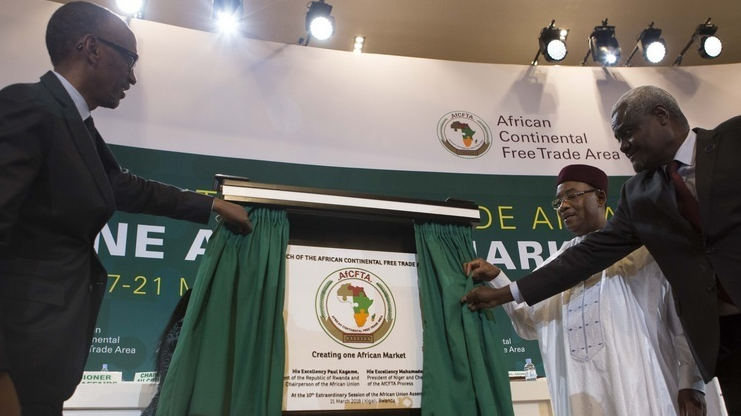 A plaque of the African Continental Free Trade Area (AfCFTA) is unveiled in Kigali, Rwanda on March 21, 2018. /Xinhua

A plaque of the African Continental Free Trade Area (AfCFTA) is unveiled in Kigali, Rwanda on March 21, 2018. /Xinhua

First, both sides should work towards the timely completion of free trade agreements (FTAs) as the AfCFTA is developing. The FTA signed between China and Mauritius in October 2019 was China's first free trade agreement with an African nation. China can launch FTA negotiations with more African countries and even explore a deal with the African Union (AU).

Second, they should propel innovation of the "Made in Africa" model. For example, Chinese enterprises in Africa could work with local counterparts to develop from single industrial parks to a comprehensive modern industrial system. China can also help to enhance digital infrastructure construction based on local conditions to promote digitalization of the region.

Fourth, they should promote mutual talent exchange and education to support Africa's development as well as the growth of Chinese enterprises in Africa. China can draw on its strengths in cultivating talent to help Africa establish educational institutions at all levels. More government-funded programs and scholarships can be set up to encourage Chinese students to study in Africa and train experts who know the continent well.

Pursuing these paths for closer cooperation between China and Africa will not only benefit China's policymaking in regard to Africa, but also help to unleash the true potential of this diverse and dynamic continent.