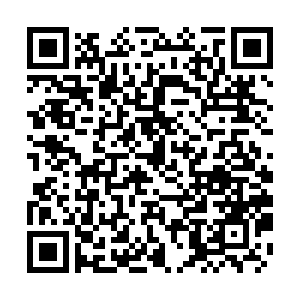 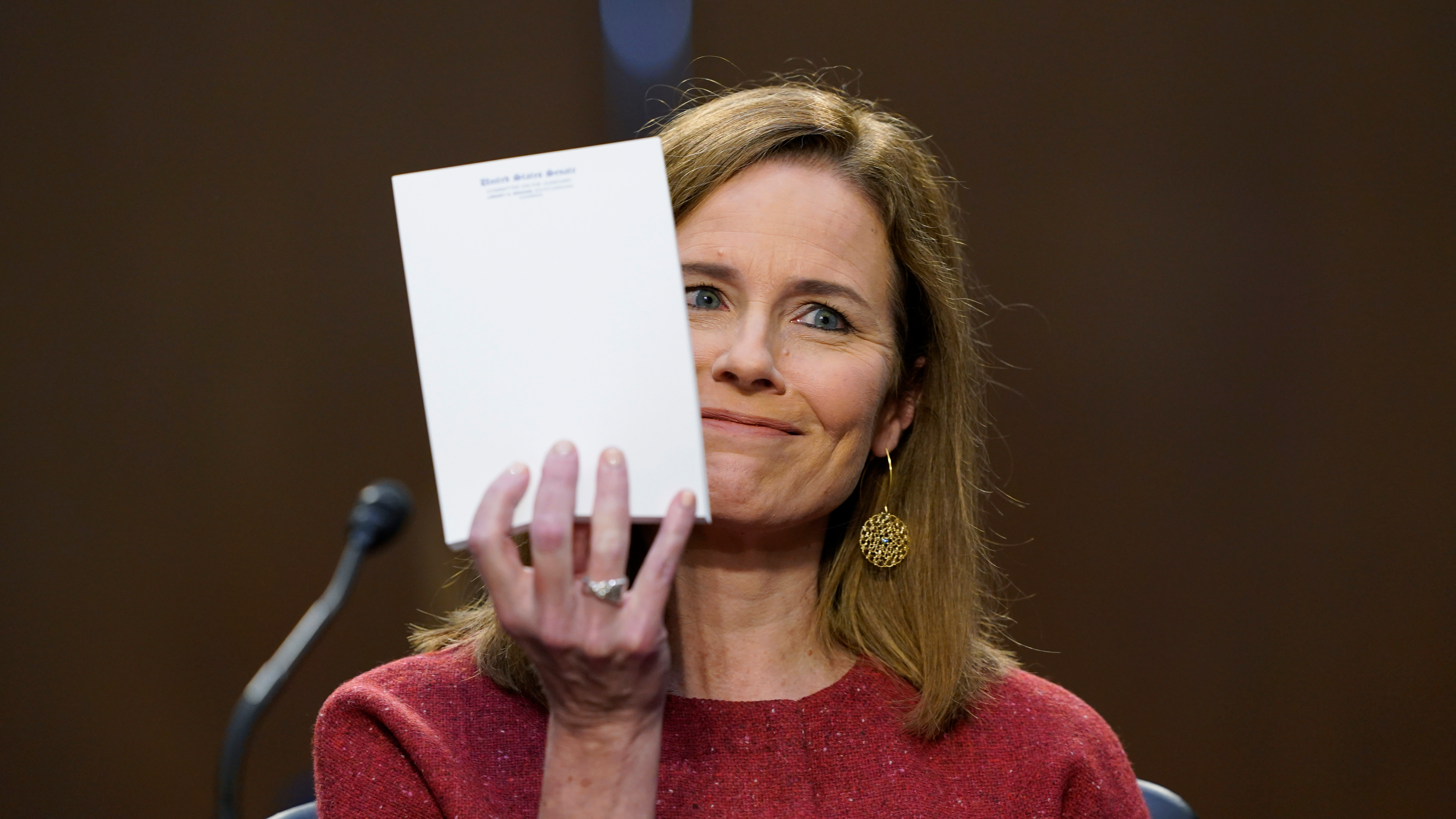 Judge Amy Coney Barrett holds up a blank pad of paper when asked what notes she was referring to during a confirmation hearing before the Senate Judiciary Committee, October 13, 2020. /AP

Judge Amy Coney Barrett holds up a blank pad of paper when asked what notes she was referring to during a confirmation hearing before the Senate Judiciary Committee, October 13, 2020. /AP

As the four-day confirmation hearing for Judge Amy Coney Barrett is about to come to end, one could not help but awe at her almost impeccable performance.

She is composed, calm, and eloquent, able to cite rulings, her decades-old writings and that of other scholars without referencing anything. Her blanket notepad that has gone viral shows it all. But her speeches reveal little about what she thinks on some of the most important issues that the Supreme Court would weigh in, ranging from abortion rights to the Affordable Care Act.

She has cited "Ginsburg rule" in declining to give her opinion on hypothetical cases, "no hints, no previews, no forecasts." She has repeatedly said during the confirmation hearing that she would set aside policy views when making legal decisions.

Despite the drama-free testimony from Barrett, there was intense back-and-forth between the two parties on Judge Barrett's personal views and legal philosophy. The confirmation hearing, at times, was turned into a political fight over an array of policy issues, for a final appeal to voters who will decide the outcome of the national election. 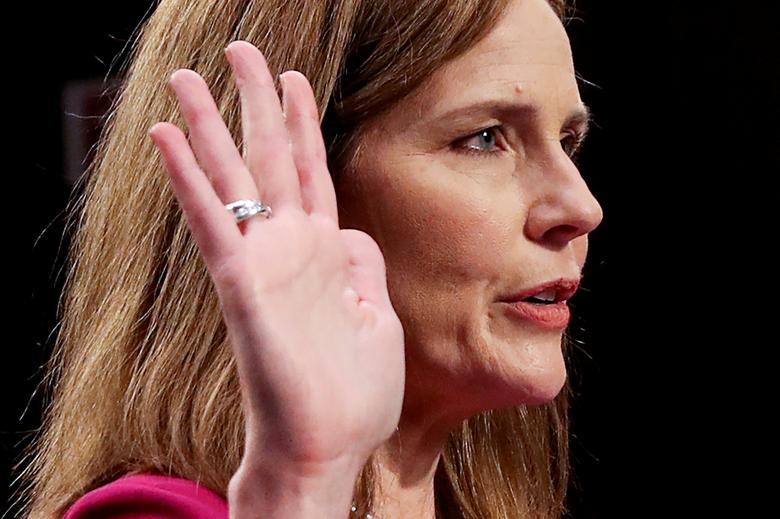 Amy Coney Barrett is sworn in to testify before her Senate Judiciary Committee confirmation hearing on Capitol Hill in Washington, October 12, 2020. /Reuters

Amy Coney Barrett is sworn in to testify before her Senate Judiciary Committee confirmation hearing on Capitol Hill in Washington, October 12, 2020. /Reuters

A devout Catholic, Judge Barrett is feared to be likely to repeal the landmark decision of Roe vs. Wade which made abortion legal in the U.S. But because she has served on the U.S. Court of Appeals for the Seventh Circuit for less than three years, she has yet to compile a body of legal opinions that could help predict how she would vote if elevated to the Supreme Court.

Questions were posed against her on whether or not she agrees with the ruling of Roe vs. Wade. During the second day of confirmation hearing, Senator Amy Klobuchar asked Judge Barrett if Roe vs. Wade constitutes a "super precedent" – a settled case that could not be overturned – to which she replied no.

Judge Barrett's religious beliefs were often cited as central for her views on abortion. Belonging to an insular religious community known as the People of Praise, she has received lots of media scrutiny ever since she was nominated for the Supreme Court position.

While serving as a faculty member at the University of Notre Dame Law School, she signed a newspaper ad opposing "abortion on demand," according to a report by the New York Times. 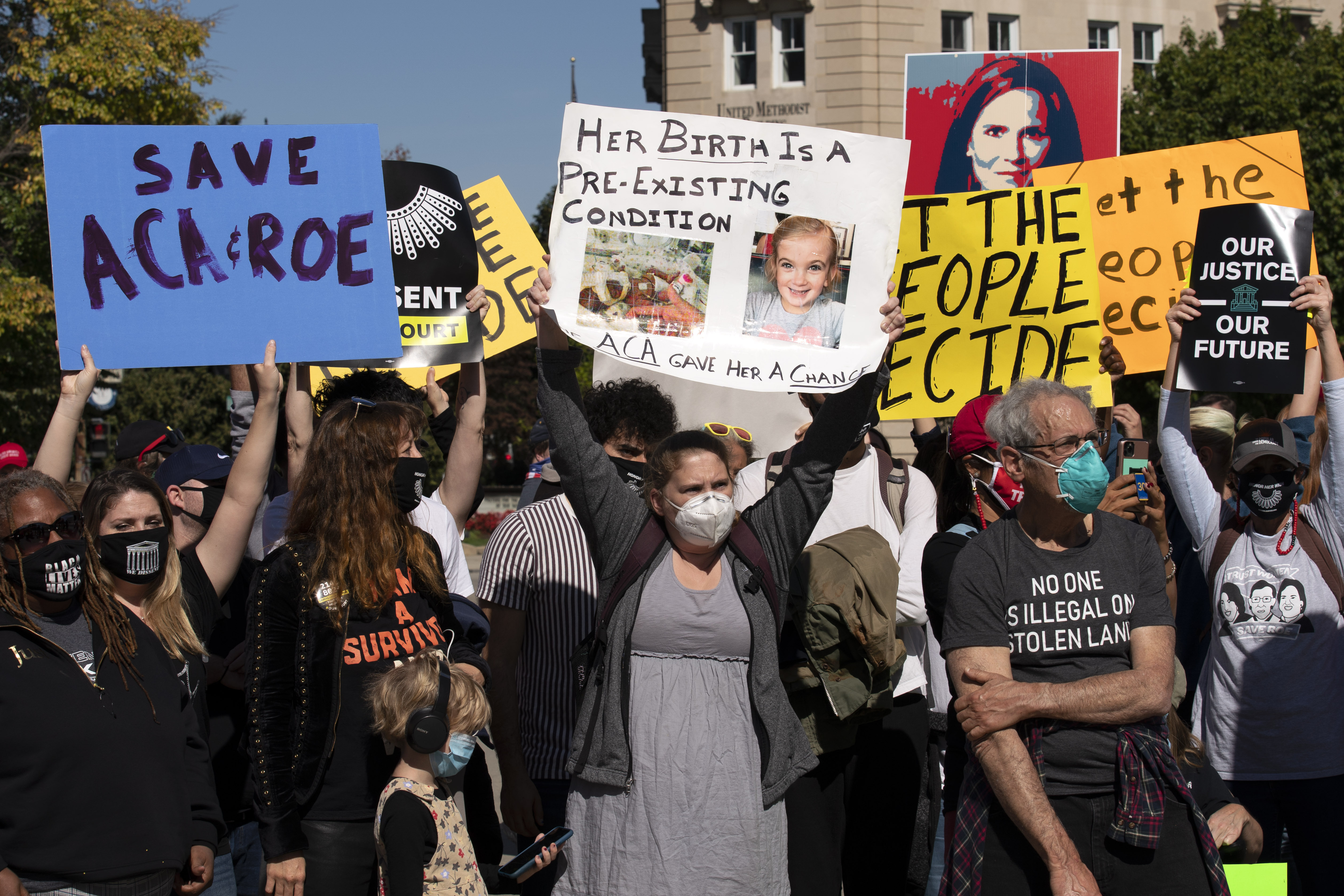 Protesters opposed to the confirmation of Amy Coney Barrett rally at the Supreme Court on Capitol Hill, October 14, 2020. /AP

Protesters opposed to the confirmation of Amy Coney Barrett rally at the Supreme Court on Capitol Hill, October 14, 2020. /AP

Judge Barrett's religious beliefs, however, were raised repeatedly by Republican senators during the confirmation hearing, but dodged by Democrats.

"The dogma lives proudly within you," a statement uttered by Senator Dianne Feinstein during the confirmation hearing for Judge Barrett for the U.S. Court of Appeals for the Seventh Circuit, was alluded to several times in the hearing on Monday. Several Republicans cited it as evidence for what they called unfair attacks from Democrats on the faith of Judge Barrett.

But no Democratic members of the committee raised the issue of Barrett's faith in the hearing, after Barrett's grilling for her religious belief during the 2017 confirmation hearing ended up elevating her profile among conservative groups.

What added to the partisan divide in the hearings is the possibility of overturning Obama's legacy, the Affordable Care Act, which the Supreme Court will hear oral arguments on one week after the election. 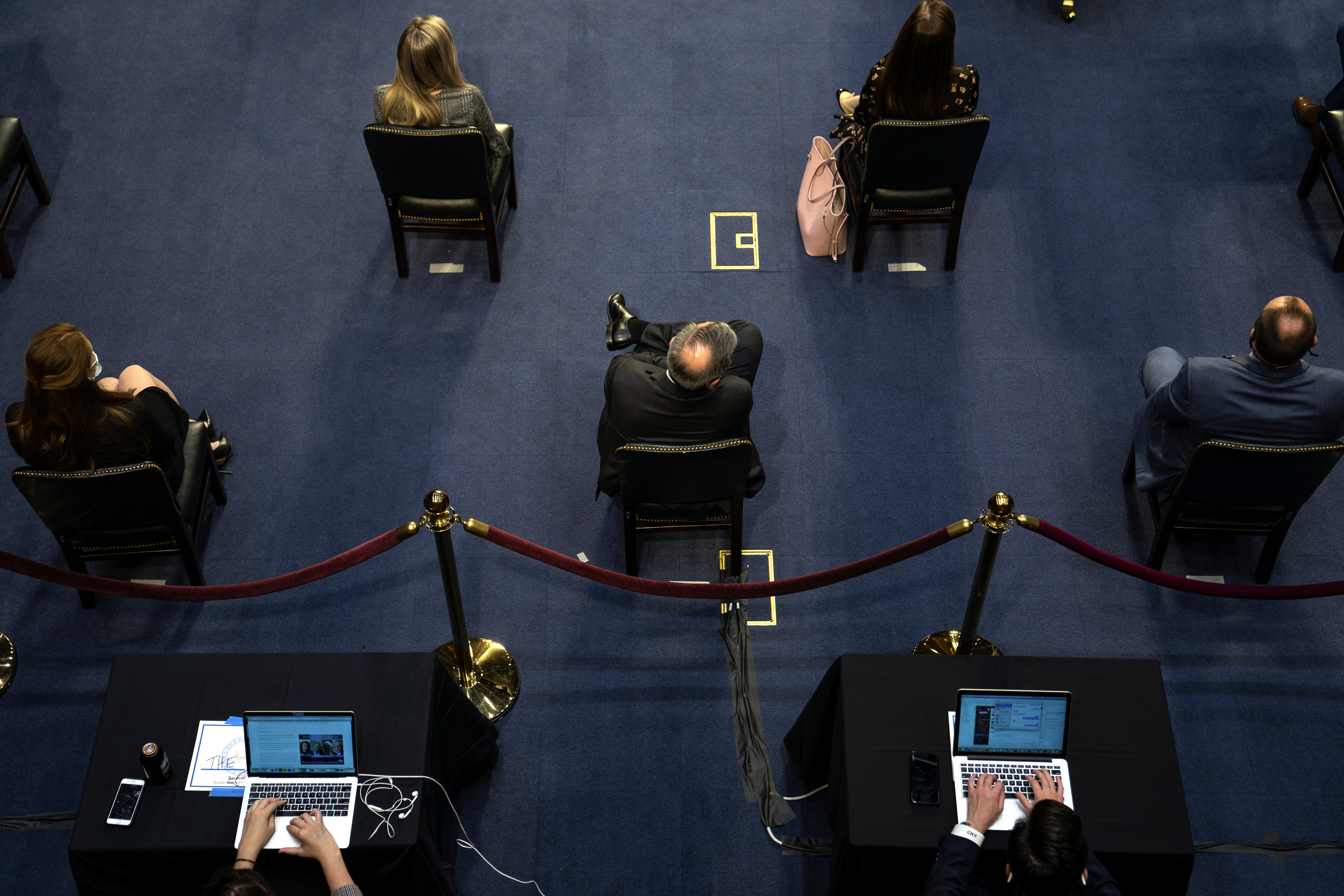 At the center of the dispute is Chief Justice Robert's 2012 opinion on the Act's individual mandate, in which he argued that the penalty required for the mandate for individuals who failed to pay health insurance constitutes a tax and therefore falls within the Congress' purview.

In a 2017 law review article, Barrett wrote that Robert's opinion "pushed the Affordable Care Act beyond its plausible meaning to save the statute."

As the country is still mired in the coronavirus pandemic, never has the Affordable Care Act been so important to the lives of tens of millions of Americans. But during the confirmation hearing, Judge Barrett noted that she is not hostile to the Affordable Care Act, and said the issue before the court is whether the mandate was a tax or a penalty and if it can be cut out while leaving other parts intact.

But Democrats pointed to the legal opinion she penned as the primary reason why Republicans rally around the nomination of Judge Barrett.

"You were added to the Supreme Court shortlist after you wrote that article and today my Republican colleagues who themselves have promised to repeal the Affordable Care Act are rushing through your nomination so you can be seated in time to hear this case," said Senator Chris Coons during the hearing. 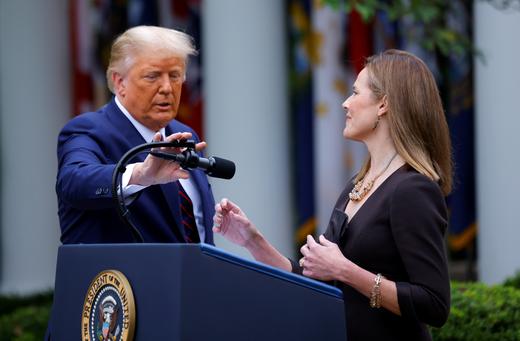 Amy Coney Barrett speaks after being nominated to the Supreme Court by President Donald Trump in the Rose Garden of the White House, September 26, 2020. /Reuters

Amy Coney Barrett speaks after being nominated to the Supreme Court by President Donald Trump in the Rose Garden of the White House, September 26, 2020. /Reuters

The fact that the confirmation hearing was turned into a partisan fight shows that both parties, unfortunately, have learnt to weaponize the court.

Starting from the disputed 2000 election in Bush vs. Gore, the Supreme Court was counted on to weigh in on election-related lawsuits, and if a dispute involving the outcome of the presidential election reached the Supreme Court this year, nine judges would be needed to decide the case, according to Trump.

The statement left Democrats highly skeptical of Judge Barrett's neutrality, if she is to rule on election dispute. Judge Barrett, in response to a question about whether she would recuse herself in the case of a contested White House race reaching the highest court, said that she would not allow herself to be used as a pawn to decide the election for the American people.

"Unfortunately, that is the cloud, the orange cloud, over your nomination as it comes before us here in the Senate Judiciary Committee," said Senator Richard J. Durbin, Democrat of Illinois.

Against a rushed bid to confirm a Supreme Court justice in an election season, no matter how much she vowed to maintain neutrality, it becomes almost impossible for Judge Barrett to distance herself from the partisan dispute.