For the world's poor and hungry, food is getting harder to get
By Zeng Ziyi 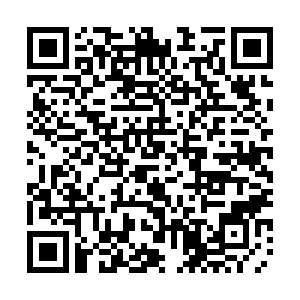 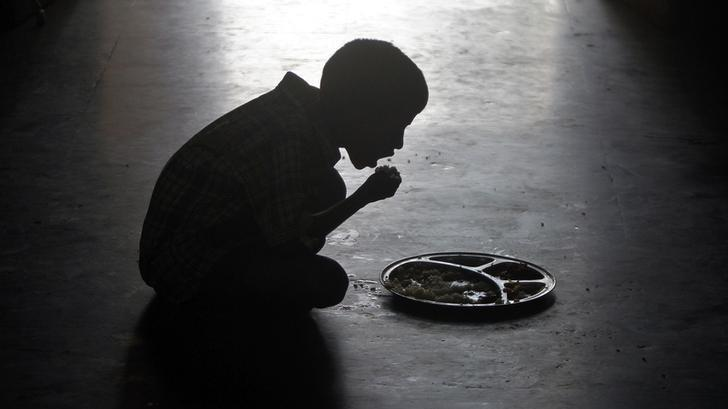 A boy eats at an orphanage run by a non-governmental organization on World Hunger Day, Chennai, May 28, 2014. /Reuters

A boy eats at an orphanage run by a non-governmental organization on World Hunger Day, Chennai, May 28, 2014. /Reuters

Armed conflict, unusual weather patterns and the COVID-19 pandemic have stacked on top of each other, making food an increasingly precious commodity in various regions throughout the world.

As we commemorate the annual World Food Day, many communities in the world are facing levels of hunger unseen in recent years, according to a report by the United Nation's World Food Programme.

Last year, some 135 million people faced food crisis or worse, according to the Global Report on Food Crises (GRFC), a consensus-based assessment of acute food insecurity situations around the world by 16 organizations. It was also the highest number recorded since the report began its publication in 2016.

With 73 million people facing a crisis, Africa accounts for more than half of the total population suffering from food insecurity. The Middle East and Asia account for 43 million, while Latin America and the Caribbean account for 18.5 million. 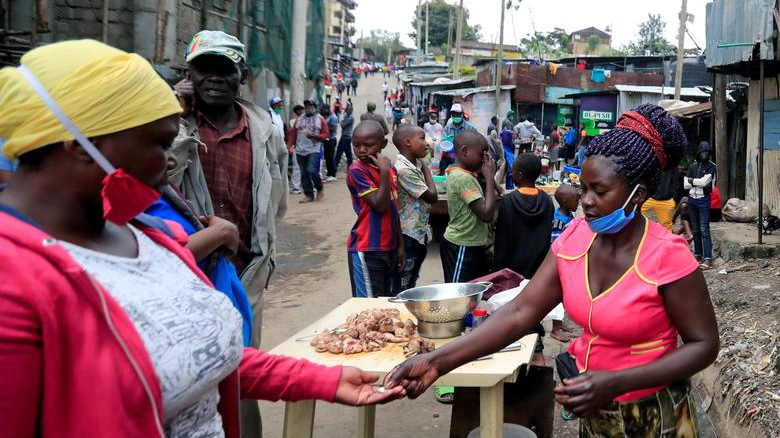 A woman sells fried chicken at her open stall along a street amid the COVID-19 pandemic in Nairobi, Kenya, April 19, 2020. /Reuters

A woman sells fried chicken at her open stall along a street amid the COVID-19 pandemic in Nairobi, Kenya, April 19, 2020. /Reuters

The COVID-19 pandemic has exacerbated the vicious cycle of job loss, armed conflict, and political instability already present in countries like Yemen and the Democratic Republic of the Congo.

A recent survey by the International Committee of the Red Cross (ICRC) among 2,400 people in 10 African countries found that since the start of the pandemic, 94 percent of survey respondents reported that prices of food and other essentials in their local markets had increased, while 82 percent said they had lost income or revenue. Only 7 percent said they had enough savings to cope with a prolonged crisis.

"The risk is that as food prices rise and people's income plummets, we could see a rise in malnutrition because families can't afford enough food, or that the foods they can afford are less nutrient-rich," said Pablo Lozano, ICRC's economic security analyst for Africa.

"We heard very clearly in our survey that people in the communities in which we work are financially struggling. This is especially true among those who relied on day labor to get by or small business owners as well as communities that were already struggling with food insecurity due to conflict or violence." 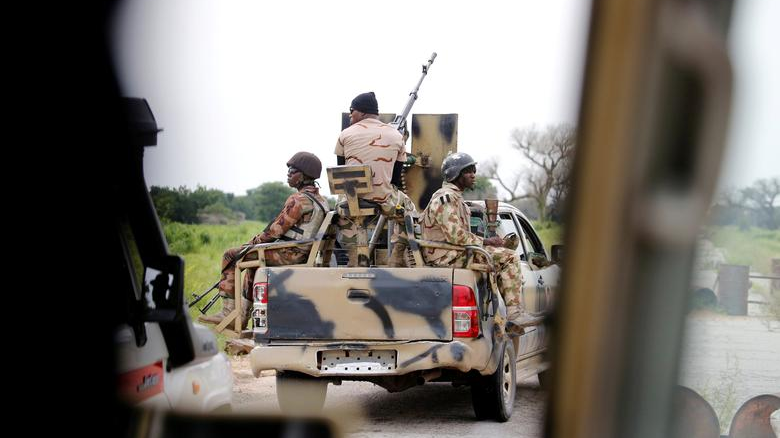 A Nigerian army convoy vehicle drives ahead with an anti-aircraft gun on its way to Bama, Borno State, Nigeria, August 31, 2016. /Reuters

A Nigerian army convoy vehicle drives ahead with an anti-aircraft gun on its way to Bama, Borno State, Nigeria, August 31, 2016. /Reuters

One of the main drivers of food insecurity is armed conflict. In northern Nigeria, a conflict between the Muslim Fulani herdsman and Christian peasants have intensified in recent years due to the rise of jihadist groups like Boko Haram.

As violence increased, so did malnutrition rates among children. According to the ICRC, the number of children suffering from severe malnutrition grew by 10 percent compared to the same period last year.

"We are very concerned by the trend, especially in Maiduguri," said Thomas Ndambu, an ICRC nutritionist. "I am certain that when Nigerian Red Cross volunteers resume their community outreach, the number of malnutrition cases will surge."

Meanwhile, 2.8 million in Burkina Faso have been forcibly displaced from their homes due to escalating violence and are now facing crisis levels of food insecurity, according to the Integrated Food Security Phase Classification System, a partnership dedicated to improving food security and nutrition analysis.

"The level of hunger is rising dangerously due to violence, lack of access to arable land, fragile adaptation strategies such as sales of household assets, and livestock. This has been made worse by the cyclical droughts and the flooding this year," said Mathew Kenyanjui, ICRC's economic security coordinator in Burkina Faso. 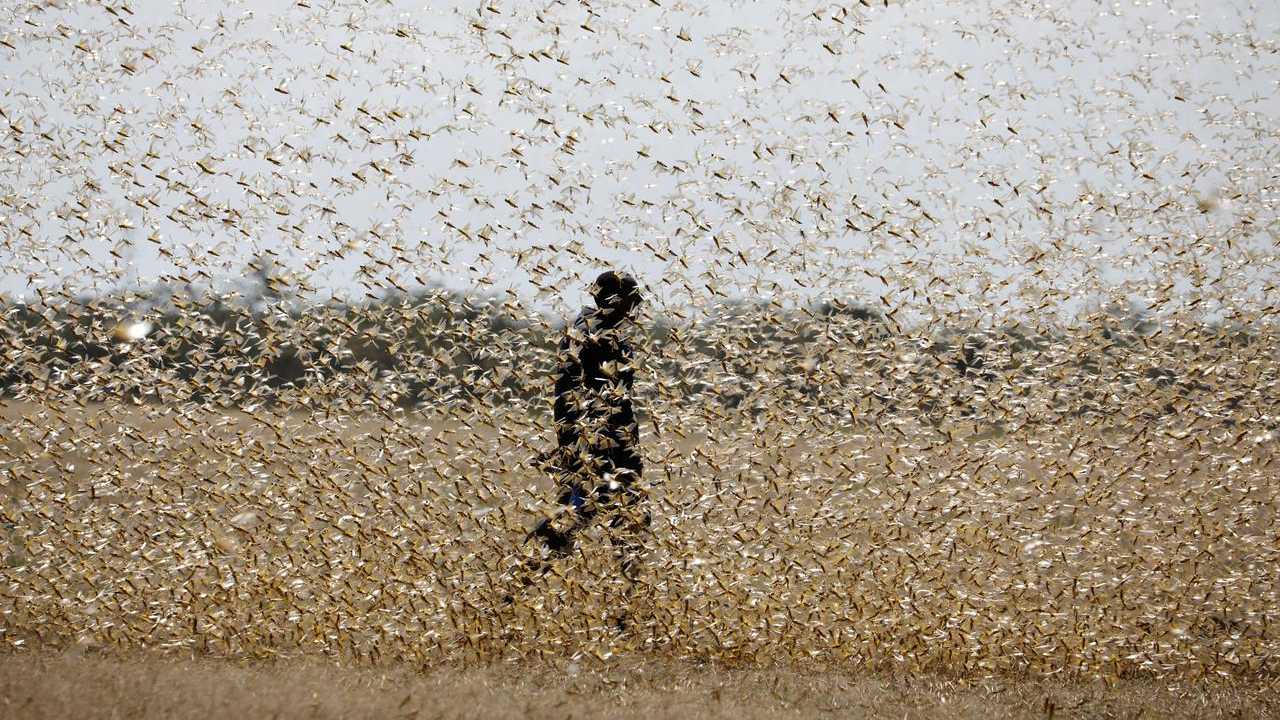 A swarm of desert locusts at a ranch near the town of Nanyuki in Laikipia county, Kenya, February 21, 2020. /Reuters

A swarm of desert locusts at a ranch near the town of Nanyuki in Laikipia county, Kenya, February 21, 2020. /Reuters

Severe weather events associated with global warming have been another main driver to the world's food supply instability. In February, farmlands in the Middle East, South East Asia, and East Africa saw a historic invasion by desert locust, which destroyed large swaths of crops. Billions of insects made up swarms so terrifying in scale that some residents living in Kenya referred to it as "signs of messiah."

In South Sudan, flooding has compounded already staggering food insecurity and malnutrition levels, where more than half of the country's 11 million people are estimated to face severe food insecurity. Protracted conflict and armed violence have impacted livelihoods for decades and forced millions of people to flee their homes and abandon their crops.

If you have a story about food insecurity and want to share with us, please write to stories@cgtn.com