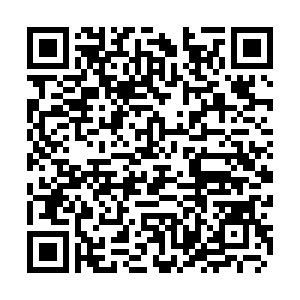 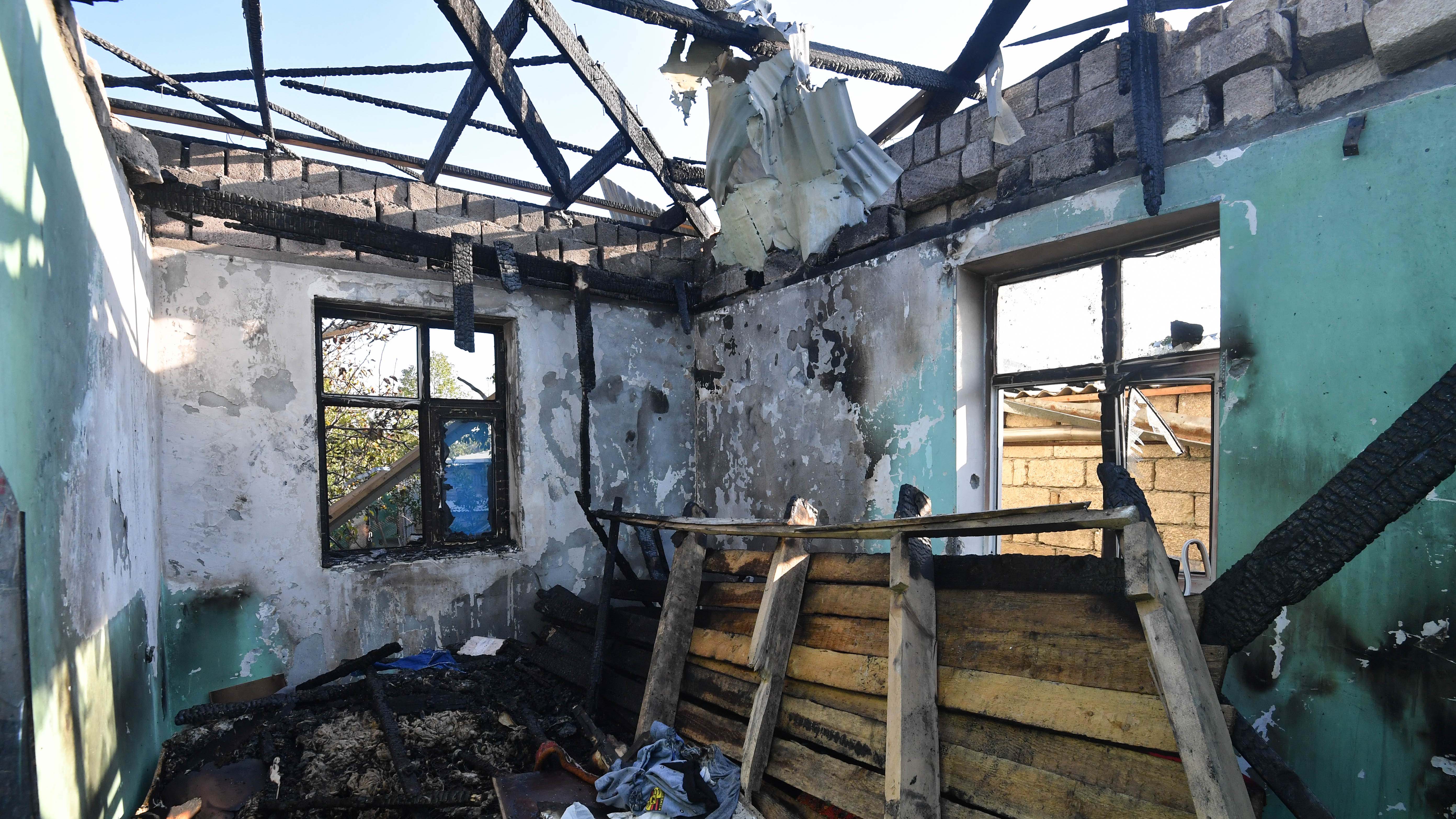 Azerbaijan said on Saturday 12 civilians were killed and more than 40 others were wounded in Azerbaijan's second largest city of Ganja on Saturday, hours after a shelling attack on Stepanakert in the Nagorno-Karabakh region, marking a new escalation in the three-week conflict between ethnic Armenians and Azerbaijanis over the region.

Artsrun Hovhannisyan, spokesman for the Armenian Defense Ministry, denied the attack and accused Baku of continuing to shell some areas inside Nagorno-Karabakh, including Stepanakert, the major city of the mountainous region.

"At dawn, Azerbaijani forces once again violated the humanitarian ceasefire by resuming shelling in the direction of peaceful settlements," said Hovhannisyan on Twitter.

In recent days, fighting continues between Armenian and Azerbaijani forces with both sides accusing each other of launching new attacks, which defied hopes of ending nearly three weeks of fighting over the disputed region.

On October 11, Azerbaijan also accused Armenia of violating a ceasefire by attacking Ganja and resulting in heavy civilian casualties. The Armenian Defense Ministry denied the attack, telling local media that it was false information.

The worst outbreak of violence in the South Caucasus since Armenia and Azerbaijan went to war over the region in the 1990s, the fighting risks creating a humanitarian disaster, especially if it draws in Russia and Turkey.

Nagorno-Karabakh is internationally recognized as part of Azerbaijan but populated and governed by ethnic Armenians.

Turkey has increased military exports sixfold this year to its close ally Azerbaijan. Russia is close to both sides but has a defense pact with Armenia. News agency RIA reported the Russian navy had started planned military exercises in the Caspian Sea. 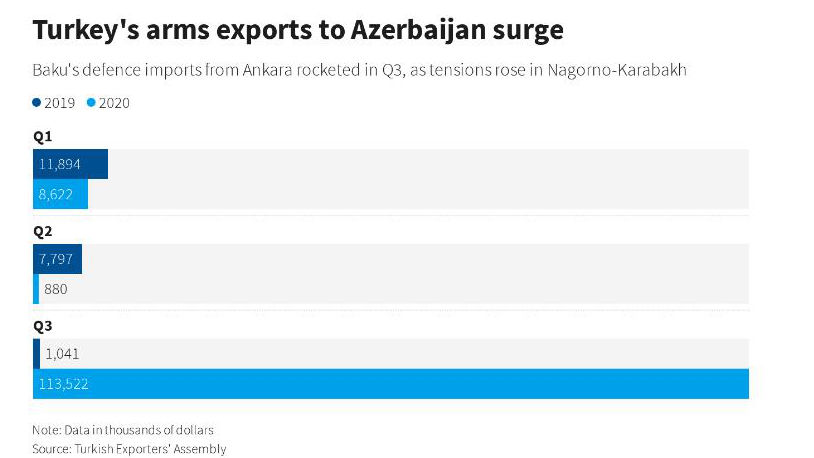 An infographic shows Turkey's military exports to Azerbaijan in recent years. /Screenshot from the Reuters website

An infographic shows Turkey's military exports to Azerbaijan in recent years. /Screenshot from the Reuters website

The hostilities, close to pipelines in Azerbaijan that carry gas and oil to global markets, are stoking concern in Europe and the United States that Turkey and Russia, already at loggerheads over Syria and Libya, will be dragged in.

U.S. Secretary of State Mike Pompeo said Turkey had worsened the conflict, calling for a diplomatic resolution, rather than "third-party countries coming in to lend their firepower to what is already a powder keg of a situation," he was quoted by broadcaster WSB Atlanta as saying.

Azerbaijan's foreign ministry said Pompeo's remarks were not in line with official U.S. government statements on the conflict.

"These remarks also do not correspond to the status of the United States as one of the co-chairs of the OSCE Minsk Group," it said, referring to the committee created by the Organization for Security and Co-operation in Europe to mediate in the Nagorno-Karabakh conflict. 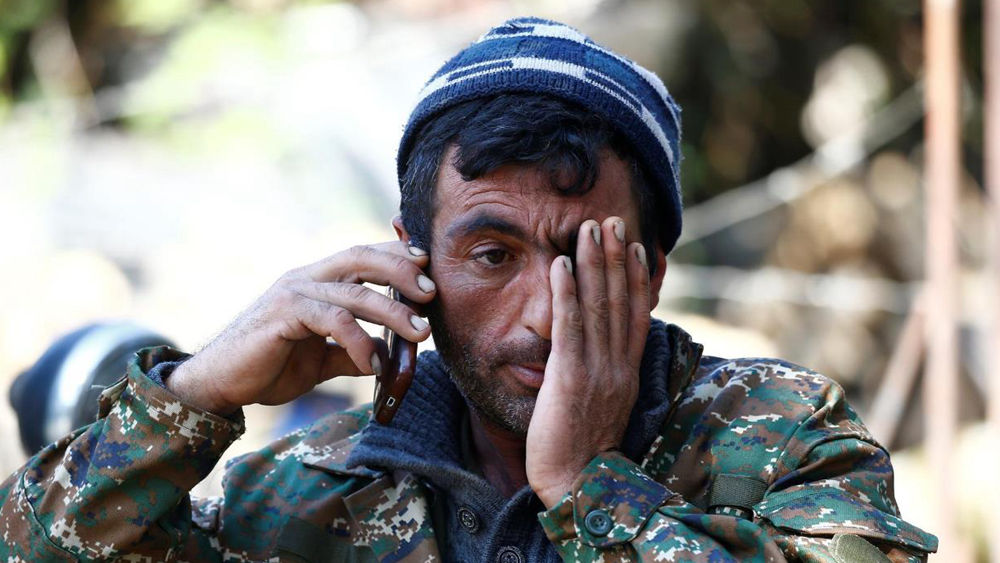 Aram Kazaryan, an ethnic Armenian volunteer soldier, speaks on his mobile phone in a street in the region of Nagorno-Karabakh, October 16, 2020. /Reuters

Aram Kazaryan, an ethnic Armenian volunteer soldier, speaks on his mobile phone in a street in the region of Nagorno-Karabakh, October 16, 2020. /Reuters

The conflict between the two former Soviet republics threatens to further damage their economies, already hit by the COVID-19 pandemic and, in Azerbaijan's case, weak oil prices.

With 43,280 COVID-19 cases, Azerbaijan said it would close secondary schools and shut the underground rail system in the capital Baku between October 19 and November 2.

In projections drafted before the fighting started, the World Bank predicted Armenia's economy would shrink 6.3 percent this year while expecting Azerbaijan's economy to contract 4.2 percent.