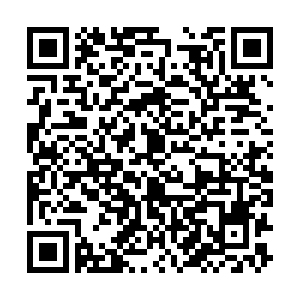 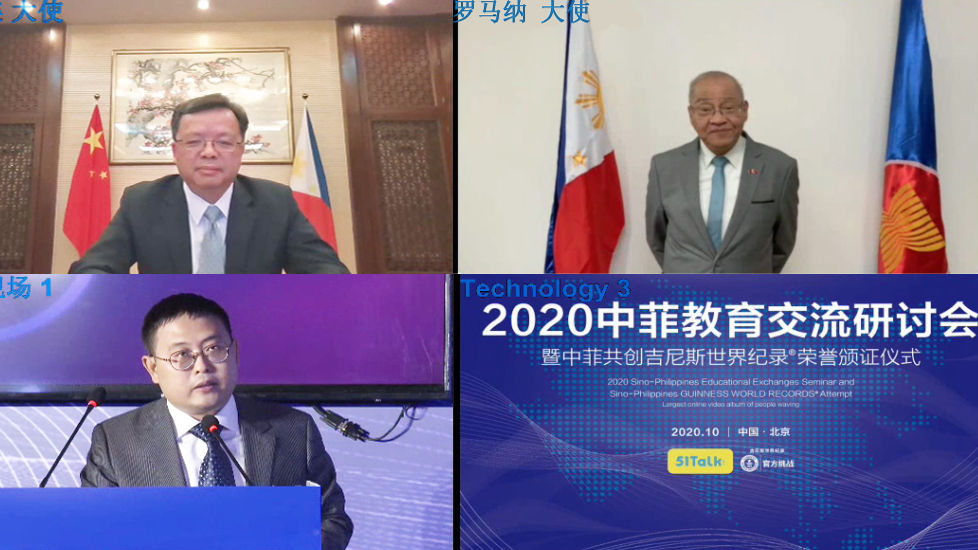 Chinese Ambassador to the Philippines Huang Xilian, 1st on the top row, and Ambassador of the Philippines to the People's Republic of China Jose Santiago Sta. Romana and 51Talk Founder and CEO Jack Huang, at the 2020 Sino-Philippines Educational Exchange Seminar in Beijing, October 16, 2020. /CGTN

Chinese Ambassador to the Philippines Huang Xilian, 1st on the top row, and Ambassador of the Philippines to the People's Republic of China Jose Santiago Sta. Romana and 51Talk Founder and CEO Jack Huang, at the 2020 Sino-Philippines Educational Exchange Seminar in Beijing, October 16, 2020. /CGTN

The booming online education and increasingly popular Filipino teachers in China's ESL (English as a Second Language) market is helping to bolster a win-win development for China and Philippines.

"China's emerging industries such as online education under the epidemic have catalyzed a new win-win cooperation model for China and the Philippines. On the one hand, it has helped China's distance education, and on the other hand, it has provided a large number of online job opportunities for the Filipino people," said Ambassador Huang Xilian, Chinese Ambassador to the Philippines, during his keynote speech at the 2020 Sino-Philippines Educational Exchanges Seminar held in Beijing on Friday.

The event, hosted by 51Talk, one of China's leading online English education platform, aimed to further strengthen and develop bilateral education exchange and cooperation between the two countries in the year marking the 45th anniversary of the founding of bilateral relations between the Philippines and China.

"51Talk has fully tapped the talents from the Philippines in the past several years. With the help of online digital technology, 51Talk has opened a window for thousands of Chinese children to communicate with foreign teachers worldwide, and it has created a worthwhile online platform for China-Philippines educational cooperation," said Ambassador Huang.

"I'm very pleased that 51Talk is giving an opportunity to 20,000 competent Filipino educators to take part in nurturing the eagerness of nearly 300,000 young Chinese people to learn the English language. This educational exchange albeit virtual provides an enabling environment for cultural exchange between Filipinos and the Chinese," said Ambassador Sta. Romana, adding that he hopes "more doors will be opened up for more and more Filipino educators in the same mutually beneficial manner."

A 51Talk student talks with her filipino teacher. /CGTN

A 51Talk student talks with her filipino teacher. /CGTN

ESL market has seen a rapid growth in China in recent years with the deepening and widening reform and opening up policies. This has witnessed many companies concentrate on providing quality English education to Chinese students by hiring foreign teachers to teach on their online platforms.

51Talk has set up several bases in Philippines to help the organization hire and train Filipino educators. Tens of thousands of Chinese students are estimated to improve their English speaking abilities with thousands of Filipino teachers on the platform.

This year, the global pandemic struck countries worldwide including China and Philippines. As the pandemic caused economic fallout and the loss of millions of jobs, 51Talk launched several campaigns to spread awareness of the livelihood opportunities available in the platform to attract 30,000 online English teachers.

Besides, the organization donated 5.25 million pesos (0.11 million U.S. dollars) worth of medical equipment and supplies to several hospitals in the Philippines to aid in their efforts to combat COVID-19.

Jack Huang, CEO and Co-Founder of 51Talk, said he is happy to see the online education helps strengthen the ties of our two countries.

The attempt is said to express the friendship between the two countries in celebration of the 45th anniversary of diplomatic relations as well as to show to the world the unity and relationship between the peoples of both countries.