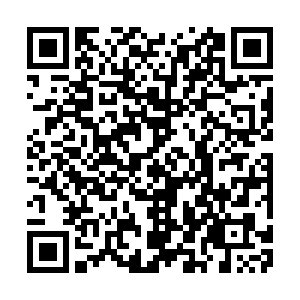 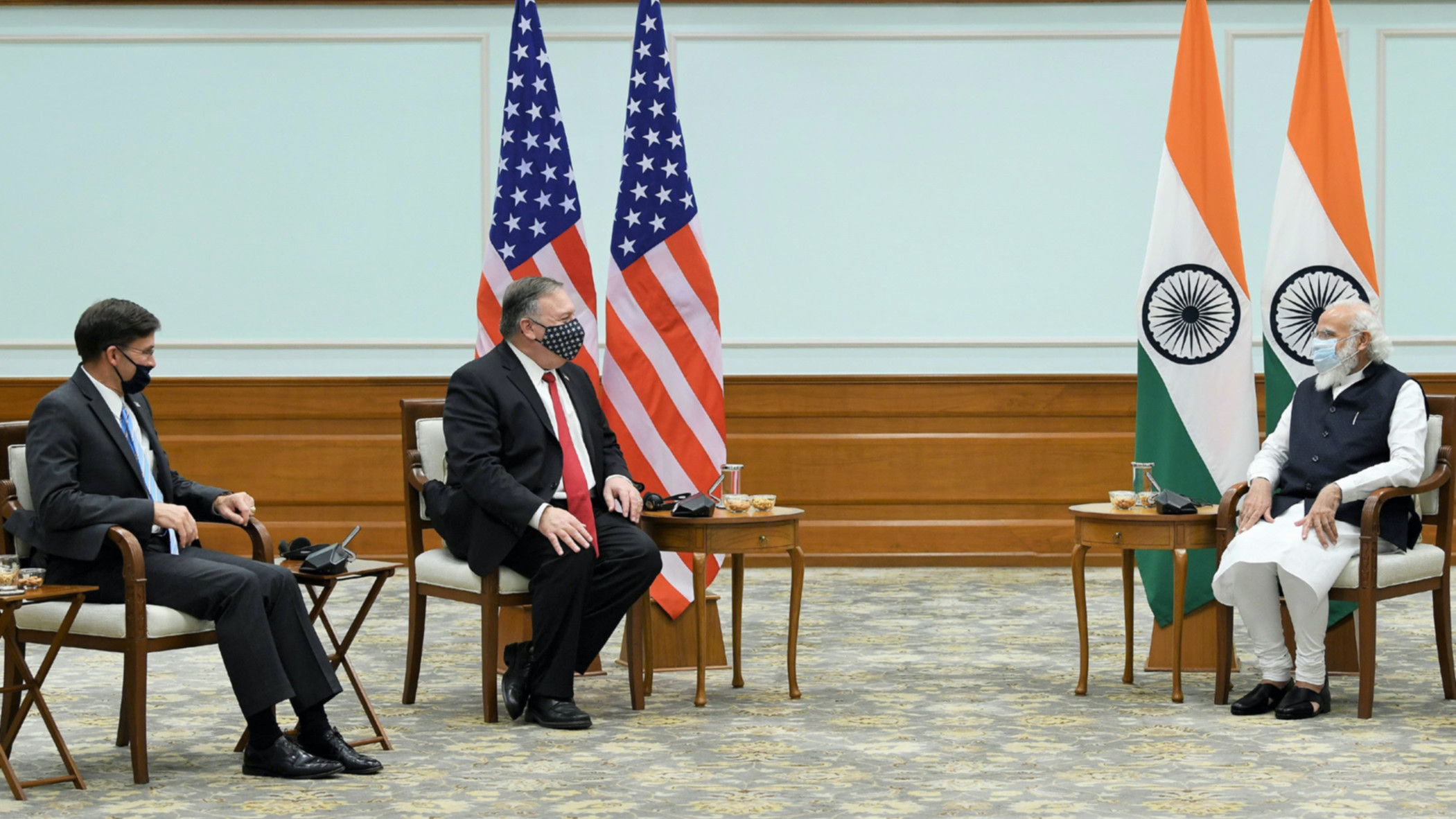 Editor's note: Rabi Sankar Bosu, an Indian freelance contributor to Chinese media outlets, writes about Chinese politics, social and cultural issues, and China-India relations with special interest on the Belt and Road Initiative. The article reflects the author's opinions, and not necessarily the views of CGTN.

Without any introduction it can be said that the essence of the third edition of India-U.S. 2+2 Ministerial Dialogue is incomplete and one-sided also.  Although from the Indian perspective, the 2+2 dialogue between India’s External Affairs Minister S Jaishankar and Defense Minister Rajnath Singh, and their U.S. counterparts Secretary of State Mike Pompeo and Defense Secretary Mark T Esper on October 27 in New Delhi was marked as path-breaking on strengthening defense and strategic ties between the world's two largest democracies, it is crystal clear that the goal of the 2+2 dialogue is to cut China off from the rest of Asia, in particular in the Indo-Pacific region. But this is a proverbial frog-in-the-well kind of perspective.

According to media reports, the two sides discussed various aspects of defense and strategic ties between the two countries in addition to India’s border conflict with China, its growing military assertiveness in the South China Sea. On October 27, India and the U.S. signed the Indo-U.S. Basic Exchange and Cooperation Agreement (BECA). Notably, the two countries signed the Communications Compatibility and Security Agreement (COMCASA) in the first edition of the 2+2 mechanism held in New Delhi in September 2018.

Indian foreign and defense bureaucrats, policymakers, think tanks and the country's media outlets overjoyed that the defense pact will give India access to classified geospatial data as well as critical information having significant military applications from the U.S. and to enable Indian armed forces to buy more sensitive military equipment from the United States and to exert its geopolitical influence in South Asia as well as in the international arena. 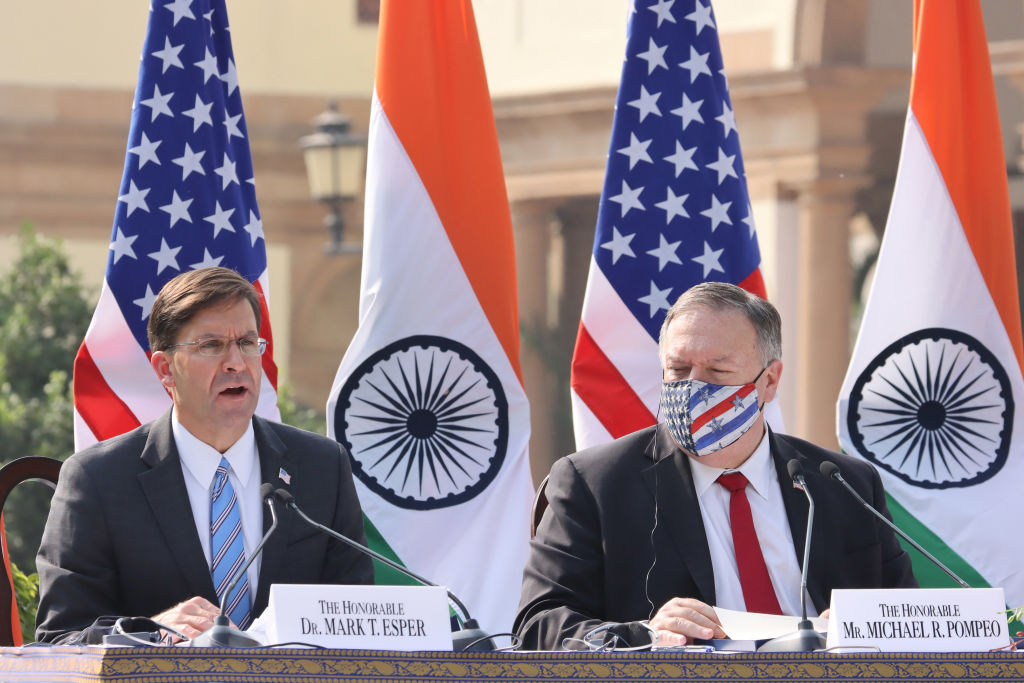 Regarding the meeting, the level of rhetoric of both sides soared higher. Pompeo said that the U.S. was "glad to announce" the inking of BECA, hailing India as a multilateral partner while lashing out at China by stating that "Chinese Communist Party is no friend to democracy, rule of law, transparency." And both Rajnath and Jaishankar said the finalization of BECA with the U.S. a "significant achievement" that will propel the bilateral relationship to an advanced level.

And here raises the question. Will the U.S. really help India emerge as a world power? Although the defense pact allows both countries to use their bases but going by the readouts, it is aimed more at facilitating U.S. operations in the Indian Ocean region, preserving their hegemonistic approach with the support of India.

There was also an ecstasy in the Indian foreign and defense establishment when addressing the media after the 2+2 dialogue, Jaishankar said, "We made clear that cross border terrorism is completely unacceptable" aiming at Pakistan. The Trump administration may have criticized the safe haven to terrorists in Pakistan, but in the joint press briefing, neither Pompeo nor Esper mentioned Pakistan in their remarks. So, there is no love lost between the U.S. and Pakistan.

Now the real question is: How many practical interests did India gain from the 2+2 meetings so far? The answer is very likely to be negative. Although it appears that India-U.S. relations are going swimmingly well, there was no progress on securing a waiver from American sanctions that bar India from purchasing Russian weapons. This is surely a huge setback for India as its over 60% weapons systems are originating from Russia. It's not good for India from a security point of view. Moreover, such type of pressure on India by the U.S. for not purchasing Russian weapons is simply unreasonable as well as "national embarrassment" for independent India. Notably, as of 2020, the U.S. has authorized more than $20 billion in military equipment sales to India.

It's also important to look at the language of the joint media briefing on the 2+2 Dialogue. Both sides had discussed cooperation on fighting cross border terrorism, supporting India's permanent membership of UN Security Council and ensuring "a free and open Indo-Pacific for all." Surely, the joint statement is clearly aimed at China's role in the South China Sea, a deliberate attempt to "sow discord between China and regional countries," as commented by Chinese Foreign Ministry spokesperson Wang Wenbin on October 27.

Violating India's principle of non-alignment, Modi's wooing of the U.S. and active participation in the QUAD (the U.S., Japan, India and Australia) have damaged traditional ties with China. If the Modi administration really wants peace in the region, it should abandon its biased views of China. As a Chinese saying goes "a close neighbor is better than a distant relative," it is hoped, India should not follow Trump's South Asia policy to harm its own interest. The warming of ties between India and China is the right choice that serves the interests of over 2.7 billion people of the two countries since the U.S. has abandoned multilateralism, pulled out of the 2015 Paris Agreement and opposed free trade breaching the global trade system.