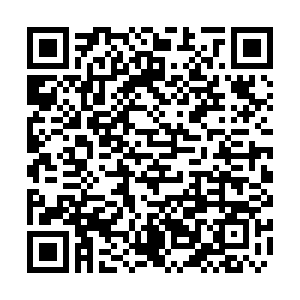 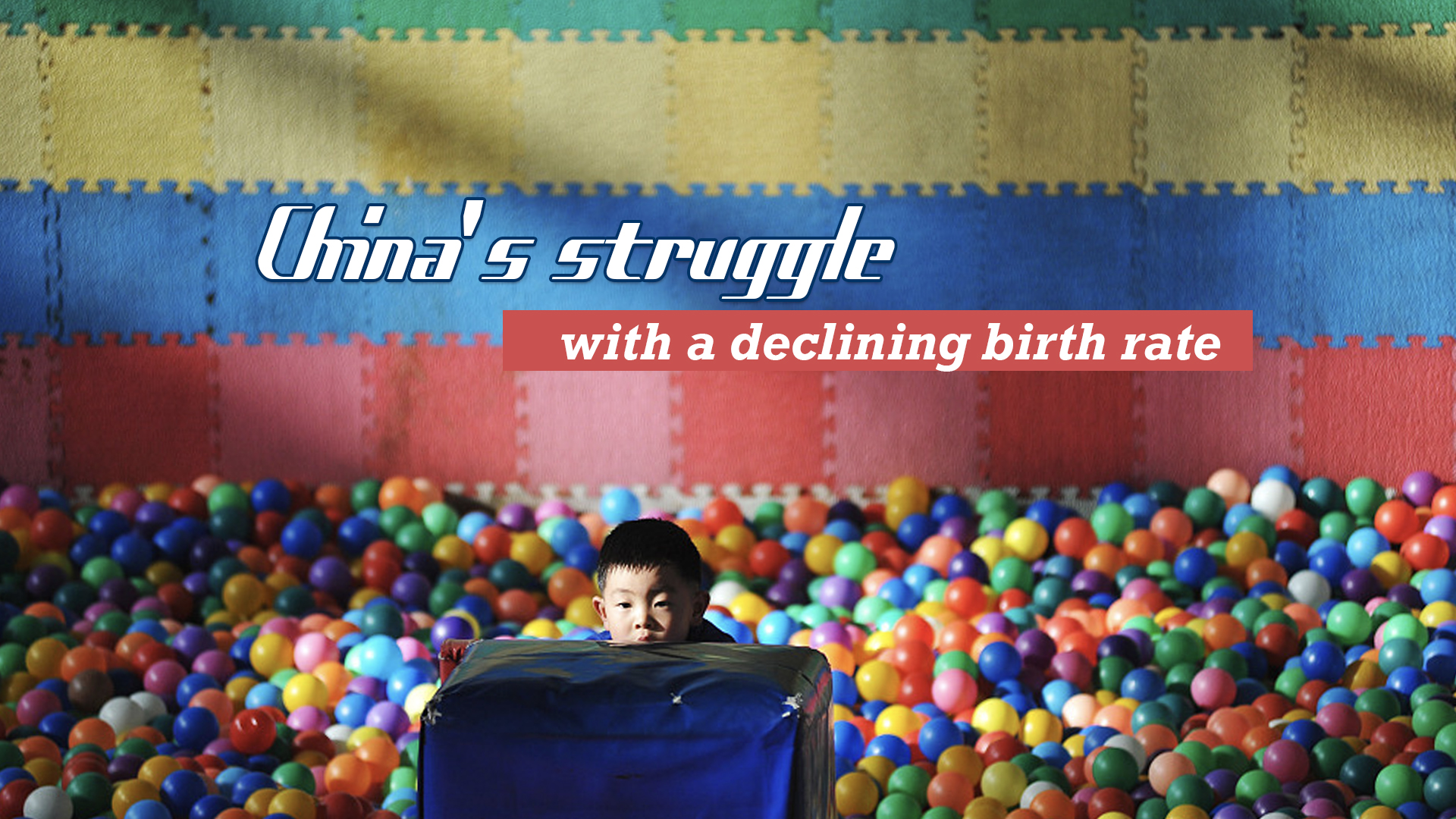 Five years after the birth of her first child, Wendy Wen, a 32-year-old woman from central China's Hunan Province, had her second child earlier this year.

She was born during the years when China adopted the one-child policy. Determined not to let her child re-experience the lonely childhood that she had, she made up her mind to have a second child early in her life. In 2015, her first child was born, and in the same year, China replaced the one-child policy with a new one that allows couples to have two children.

Easing birth restrictions is aimed at boosting the country's stagnating population growth and helping deal with a shrinking and aging population. After China adopted the two-child policy in 2016, the number of births rose by 1.3 million to 17.86 million from the previous year, according to data from the National Bureau of Statistics.

The loosening of the birth control policy does have an immediate effect on some families' decision to have a second child, said Lu Jiehua, professor of Department of Sociology of Peking University. In 2017, second-child births accounted for 51.2 percent of the country's total births, which shows that some women decided to have a second child immediately after the relaxed policy was announced. 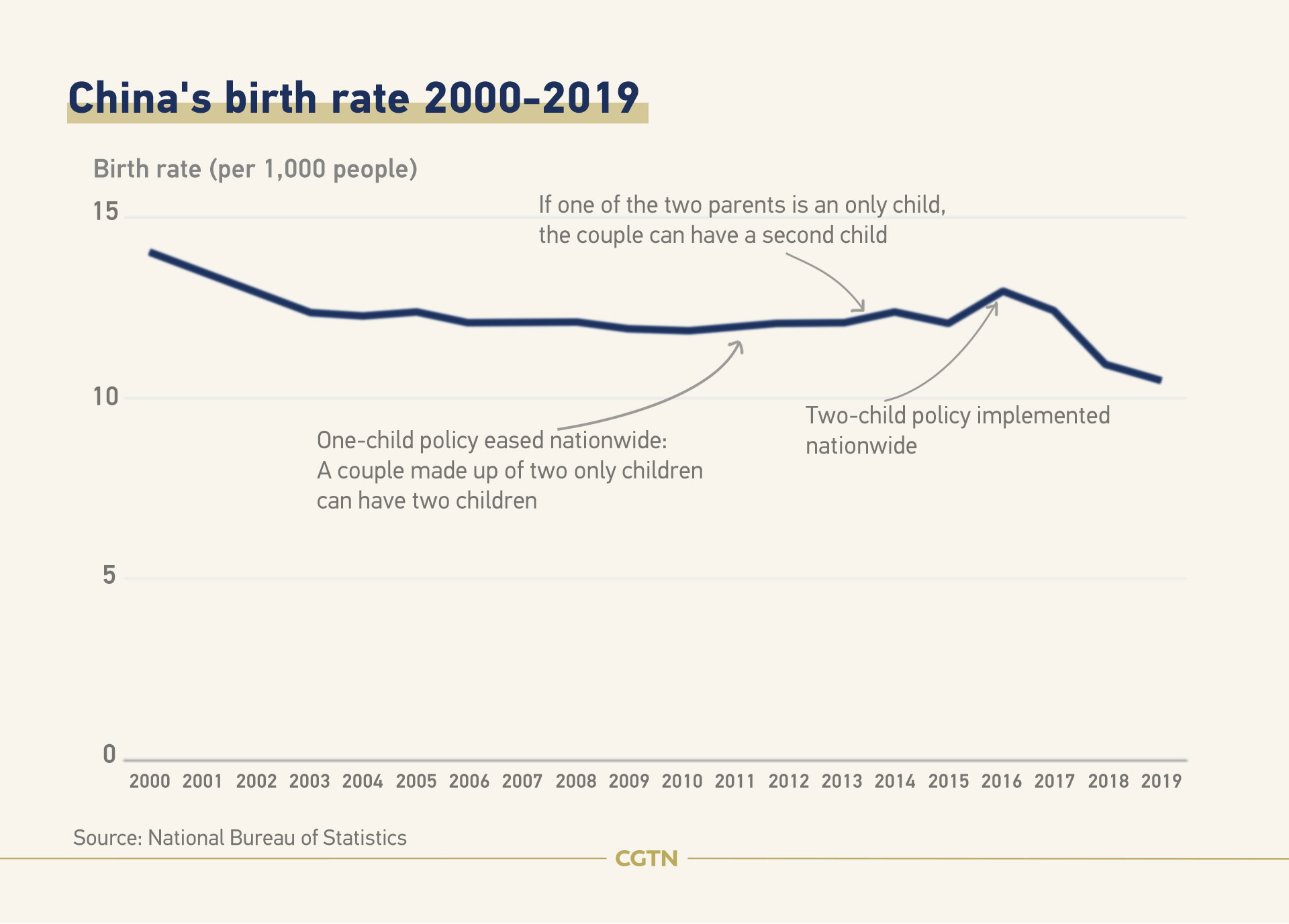 But the effect, termed "pile-up effect" by demographers, is rather short-lived, according to Lu. Though there were 22 percent more second-child births than first-child births in 2017, births in China have fallen three years in a row, from 2017 to 2019. Last year the figure dropped to 10.5 births per 1,000 people, or the equivalent of 14.6 million babies, the lowest since 1961.

Ren Zeping, chief economist for Evergrande, wrote in a recent article that China should further relax its birth restrictions, allowing couples to have three children before it is too late.

According to his calculation, the continuous birthrate drop is a result of a fall in the number of women of reproductive age. And since the figure will continue to decline in the future, China's birth rate is expected to experience further falls.

It is already very difficult to change people's reproductive behavior, he wrote, and thus a quick loosening of the policy is necessary. 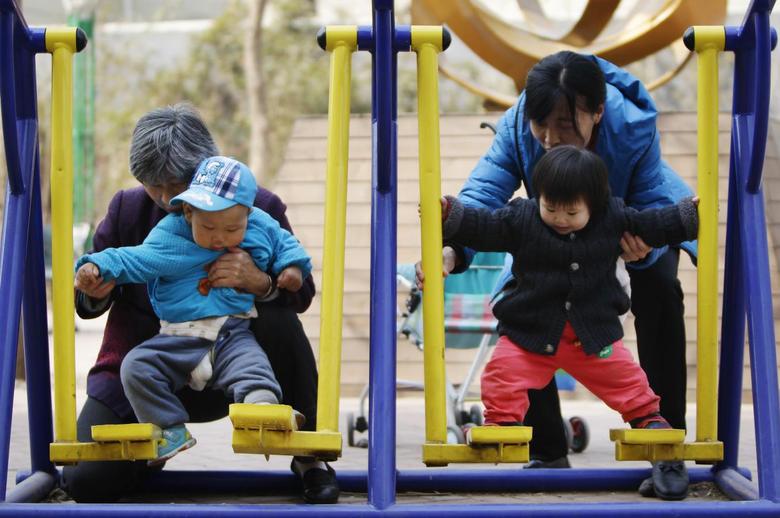 Children are seen being taken care of by grandparents at a community in Beijing, China, April 3, 2013. /Reuters

Children are seen being taken care of by grandparents at a community in Beijing, China, April 3, 2013. /Reuters

The prolonged period of below-replacement fertility is contributing to the acceleration of population aging. By 2050, the number of people aged 60 or older in China is forecast to reach 487 million, or 35 percent of the population.

If birthrates continue to fall while life expectancy increases, China will ran short of labor force and its rapid aging will stymie its economic growth, said Lu.

Despite the policy changes, many young couples in China are reluctant to have children because of the high cost of raising a child. 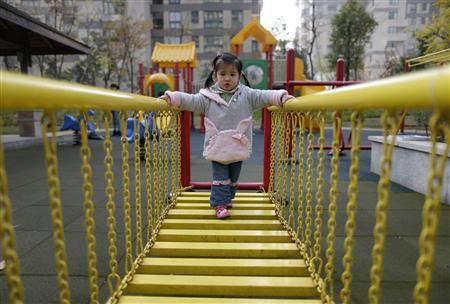 A child walks on a swinging bridge at a kindergarten in Wuhan, Hubei Province, China, December 3, 2012. /Reuters

A child walks on a swinging bridge at a kindergarten in Wuhan, Hubei Province, China, December 3, 2012. /Reuters

Annie Hao, who recently gave birth to her son and is considering having a second child, said the rising cost of medical expenses and education, is standing between her and a second child.

Determined to offer her child the excess to the best educational resources, she is planning on sending her son to a private kindergarten which requires a yearly tuition of around 100,000 yuan. Hiring a nanny, extracurricular activities, and medical insurance all require extra pay, and the total cost can reach as high as 200,000 yuan per year, per child.

"The problem is not whether women will have their second child, but if they will have a child at all," she said.

Wen, who works at a tech company in Beijing, feels differently. Though she has a decent paycheck, she never thought of sending her children to expensive private schools or private hospitals.

"You do what you can pay for," she said. "There is no need to live beyond your means." 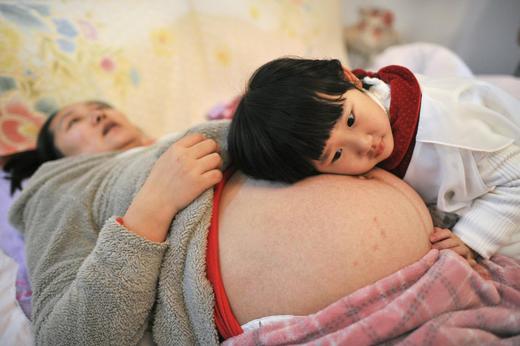 A pregnant woman lies in bed as her daughter tries to find out what is taking place in mother's belly in Hefei, east China's Anhui Province. /Reuters

A pregnant woman lies in bed as her daughter tries to find out what is taking place in mother's belly in Hefei, east China's Anhui Province. /Reuters

Across China, provinces have scrambled to propose a series of policies to boost childbirth. In northeast China where population decline has seriously undermined cities' economic potential, local authorities in Liaoning announced that it would extend an additional 60 days of maternal leave and provide educational and medical subsidies for families with two children.

On a national level, starting from 2019, couples can get tax relief on spending related to their children's education.

But the policies to win over young women through financial stimulus seem to end with less satisfactory effect. "It is about creating a conducive environment to child-bearing, through a combination of policy approaches," Lu noted. He suggested measures such as extending maternal leave, and most important of all, dealing with gender discrimination in workplace and recruitment so that child-bearing would not be considered a hindrance to employment.

Wen, who is now back to her office after having her second child, is shifting the focus of her life back to work and career.

"At different stages of life, I may want different things, and I want an environment that respects that," she said.