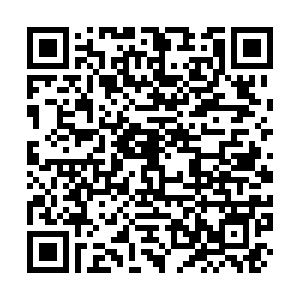 "I didn't expect so many colleges would respond to the mutual aid box," said Liang Yu, who initiated a campaign get boxes of shared female sanitary products on Chinese college campuses.

On October 14, Liang Yu, who founded Wuxi Lingshan Charity Foundation, posted on Weibo about the sanitary napkin mutual aid box. A week later, Xu Luming, a sophomore at East China University of Political Science and Law, was inspired by this idea, and placed a mutual aid box of sanitary napkins outside the four bathrooms in the school building. 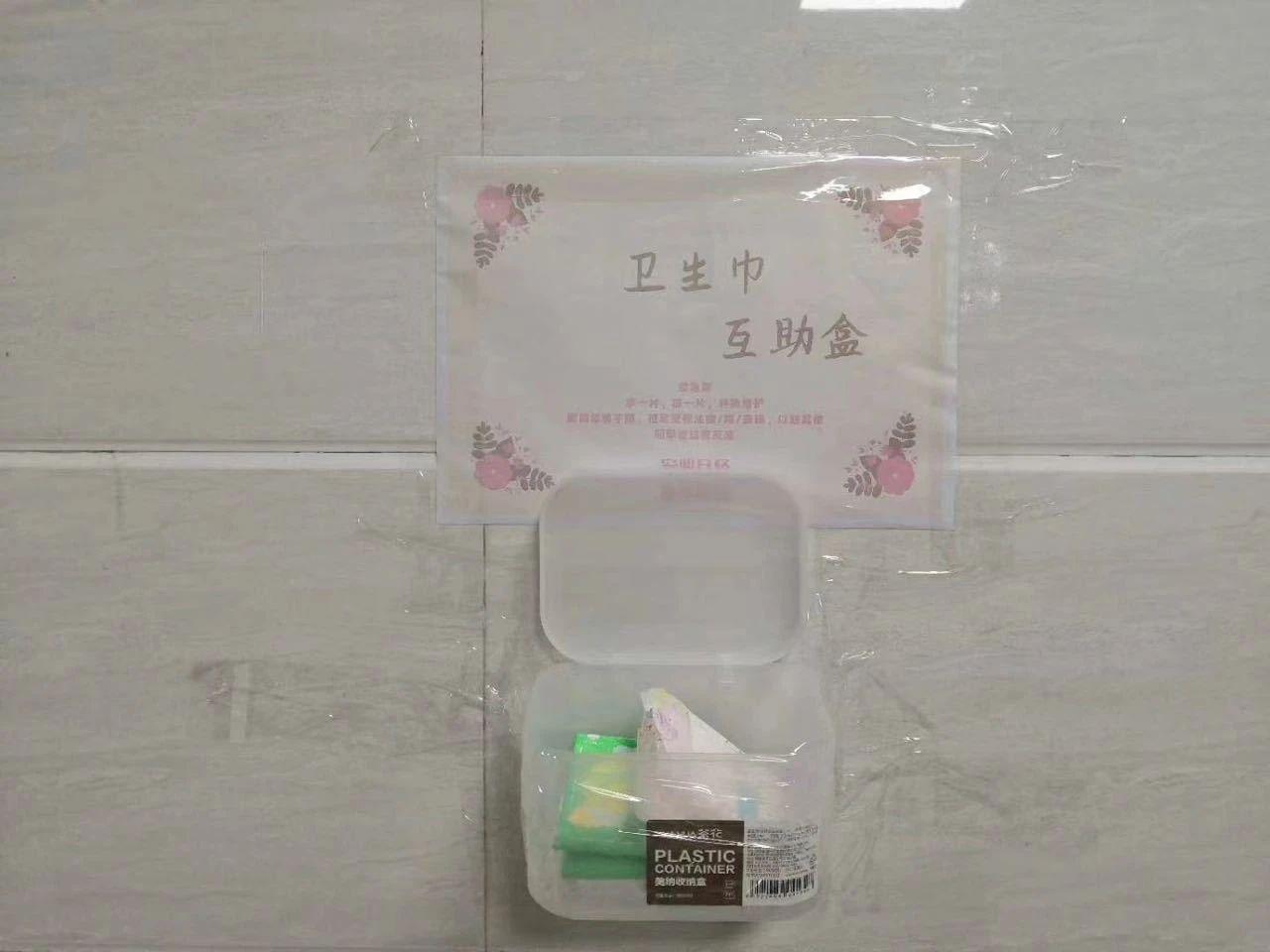 "For emergency use, take one and then put one back to maintain the storage. Brands don't matter," said a sign next to the box. Over time, the idea started to spread to other campuses. As of 10 p.m. on October 27, a total of 126 schools have placed sanitary napkin mutual aid boxes. And most of them are put outside of the bathroom.

"The purpose of doing this is to against period shame, so I specially put it outside," Xu Luming explained. The box is also transparent. This is the part that these students insist for. For them, the voice of "stop period shaming" is as important as providing convenience for women. "Sanitary napkins do not need to be covered. They should be seen by everyone," Lin He, a male student from China University of Political Science and Law said. 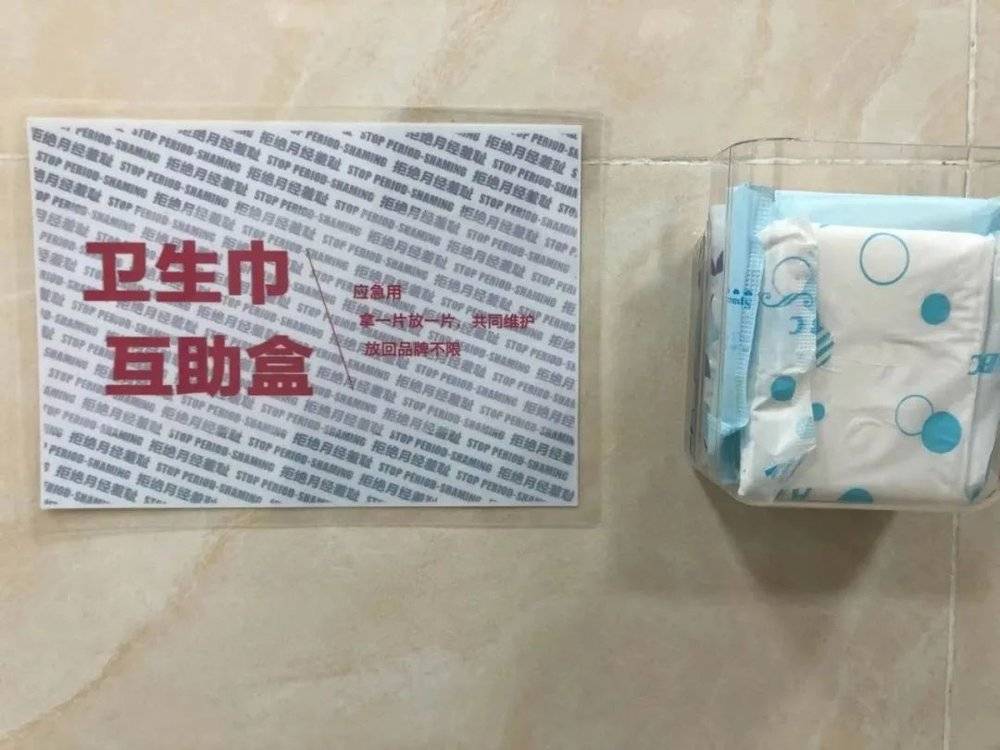 The poster with "Stop Period Shaming" words at the backround near the mutual aid box. /Weibo

The poster with "Stop Period Shaming" words at the backround near the mutual aid box. /Weibo

Lin He is actually one of a few guys who participated in this campaign. Considering the usage habits of different women, he also added tampons in the box. After he posted this idea on social media, it stirred heated discussion among students at China University of Political Science and Law. Many people said that this type of thing shouldn't be discussed publicly, while others shared their thoughts on hygiene issues, the regular maintenance, and long-term supply.

Lin He expressed that as a man, he can only try to understand menstrual issues, but he cannot empathize with women after all. But in any case, "you can also try to do something practical first. In fact, many of the people who acted together this time have different opinions. But in this matter, they are actually all in good faith." 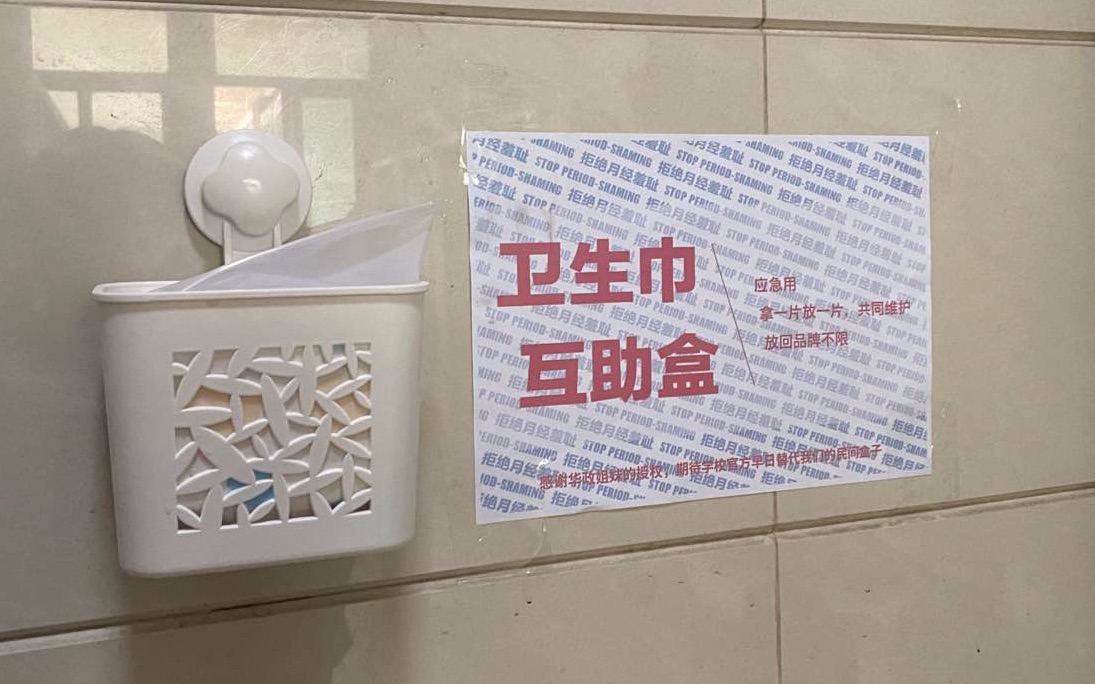 The bottom line says that "Hoping the official mutual aid box of school will soon replace this one." /Wuhan University

The bottom line says that "Hoping the official mutual aid box of school will soon replace this one." /Wuhan University

Is it so shameful to say the word "menstruation" even nowadays? Unfortunately, the answer is still yes.

The concealment of menstruation is not a unique phenomenon in any country or place, it is common in all countries in the world. Foreign countries also use expressions like Aunt flo, shark week, Girl time, monthly visitor, etc. instead of menstruation. In the 2019 Oscar-winning best documentary short film "Menstrual Revolution", when asked "What is menstruation", some Indian men in the village shook their heads and said that they didn't know menstruation, and some gave out shocked answer: Menstruation is a disease, and most of the people who get it are women.

At the beginning of the year, the woman who started the campaign Liang Yu proposed that female medical staff members fighting epidemic were lacking menstrual supplies, and initiated donation activities; in the middle of the year, bulk sanitary napkins triggered discussions on the topic of "menstrual poverty." Liang Yu and her team immediately launched the "menstrual relief" action to buy menstrual supplies for women in poverty-stricken areas. 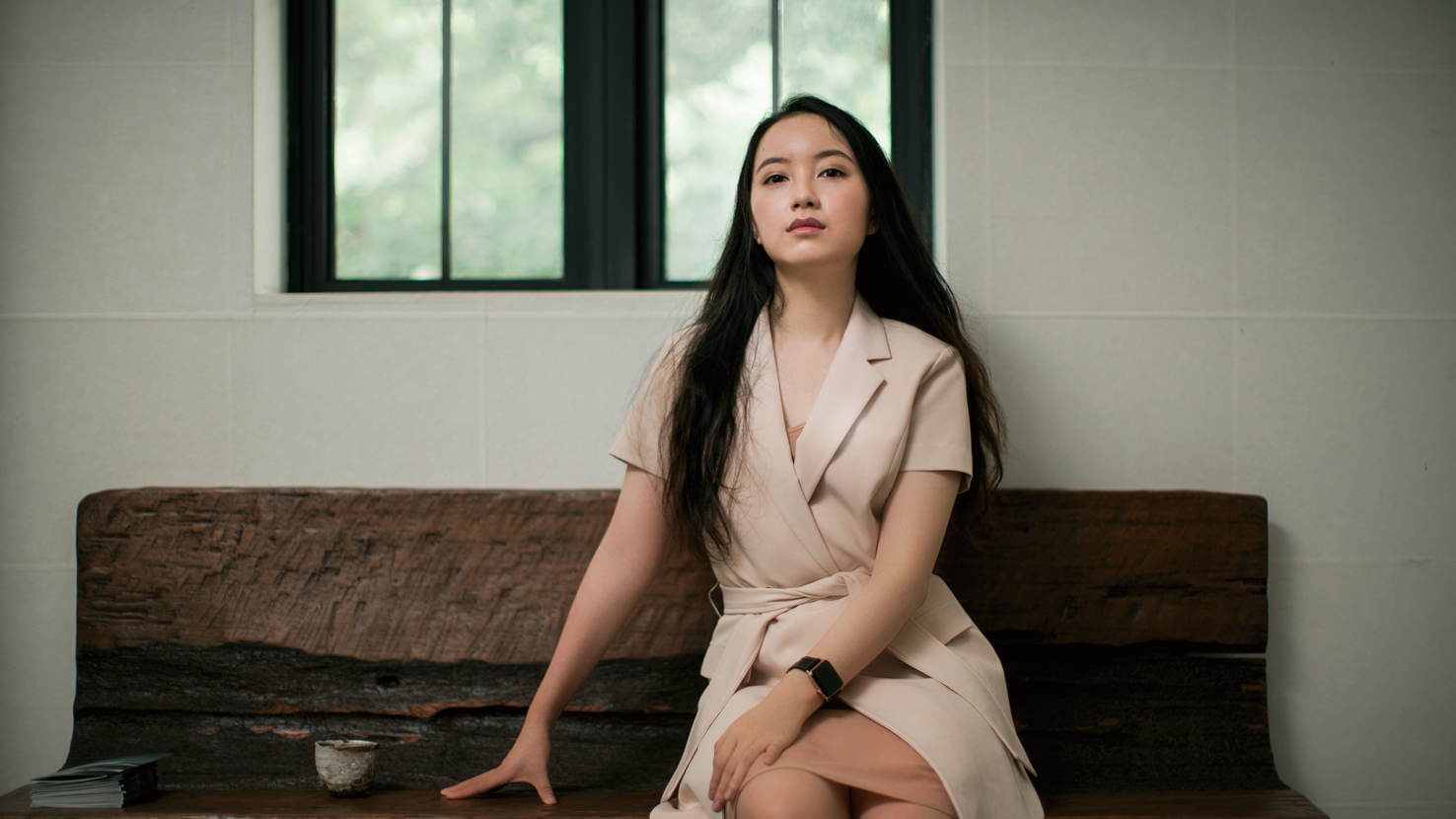 This time, many girls also expressed their recognition to Liang Yu, "I hope my sisters can talk about menstruation confidently." "The biggest significance of this matter is to subtly change the society's attitude towards menstruation."

The mutual aid box action also has controversy. "I think it is good to have controversy, because if no one discusses, it is the worst. Being aware is the beginning of change." Liang Yu hopes that the discussion over period shame could gradually become desensitized.