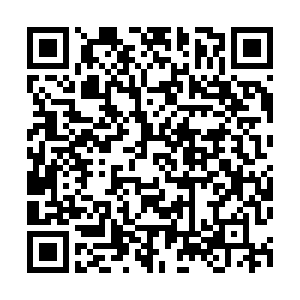 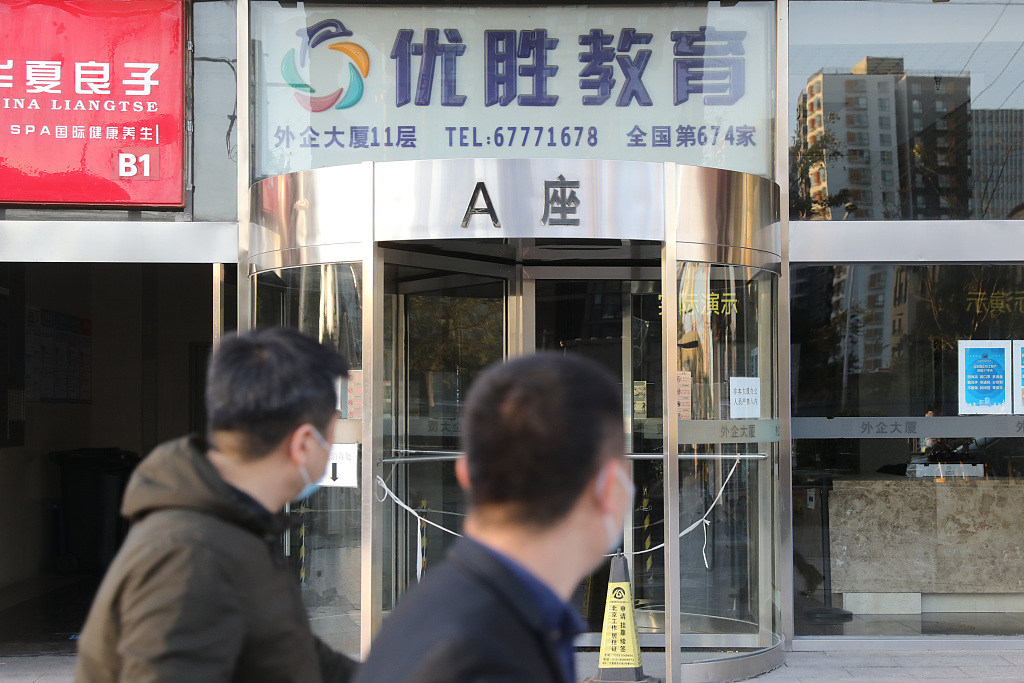 An office of Youwin Education is closed and empty in Beijing, October 22, 2020. /CFP

An office of Youwin Education is closed and empty in Beijing, October 22, 2020. /CFP

Founded more than 20 years ago, Youwin Education, a company with more than 1,100 stores and over 30,000 employees across China providing young students extracurricular classes like math, physics and English, was caught in a scandal recently as many of its stores have been closed, numerous employees complained online the company hasn't paid them salaries for months, and many consumers flooded to its headquarter in Beijing last week to ask to refund their advance payment.

The same happened to Jushidazhen, a company providing American football training for junior students. Founded in 2012, the company has 176 campuses across China, but since January 18, all of its classes have been suspended due to the Spring Festival and the coronavirus outbreak that followed. Though it announced that it would reopen in August, that didn't happen. In September, many parents received a notice from the company that all campuses in Beijing will no longer operate without explaining whether consumers can get refunds.

Youwin and Jushidazhen are not the only two that ran away after falling into crisis, and even before the epidemic, the education industry has already been experiencing a fierce reshuffle.

According to official data, over 12,000 education companies closed in 2019, covering the field of K–12 education, preschool education, English training, and studying abroad consulting. In 2020, impacted by the coronavirus, more have closed down or are on the edge of it.

A survey conducted by iiMedia Research from January to December in 2019 shows that 40.5 percent of respondents claimed that they had experienced the collapse of a private education company, and 19.0 percent said they witnessed the collapse when they're attending the classes.

Behind the bankruptcy tide, numerous consumers who had paid thousands, even tens of thousands of yuan, are scrambling to get refunds.

The industry now is suffering a serious crisis of confidence. 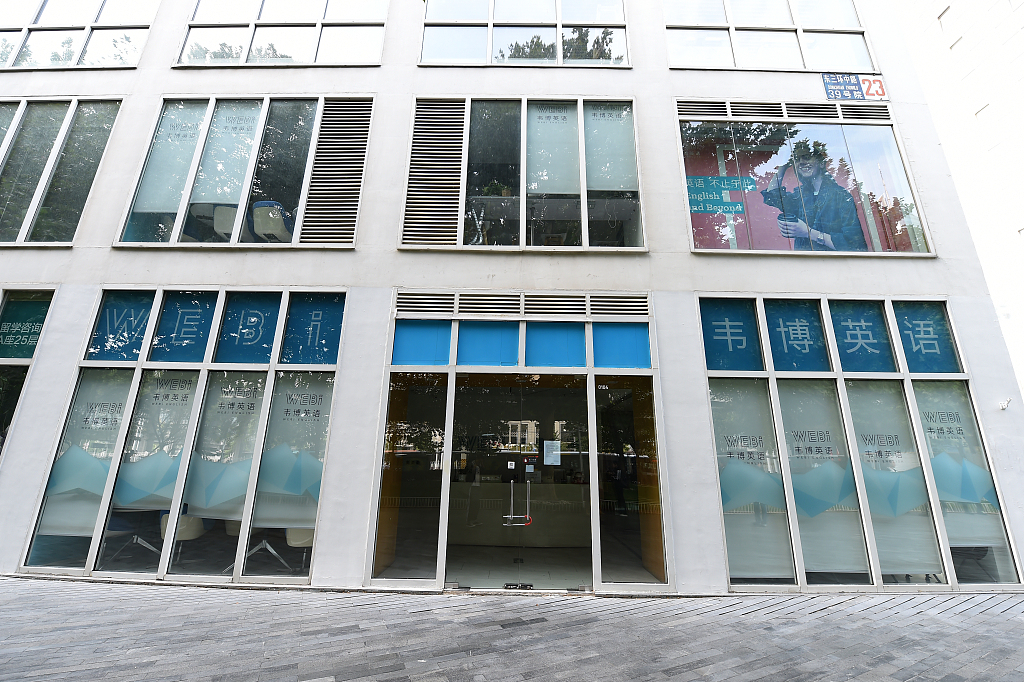 A store of Webi English is seen closed in downtown Beijing, October 11, 2019. /CFP

A store of Webi English is seen closed in downtown Beijing, October 11, 2019. /CFP

According to the National Consumers' Association on Wednesday, it received 219,909 consumer complaints in the third quarter of this year, among which 15,639 are related to education and skill training.

Experts have analyzed the reason behind the "runaway" phenomenon of education companies. They believed that some company's runaway is out of malicious intent as their initial purpose is to collect money rather than providing education for consumers, but this is very rare. Most companies went bankrupt because of poor management and strained cash flow as many of them misappropriated consumer's advance payment for investment but failed or used the money to expand their market share.

Since the beginning of 2013, with the development of the online economy, online education has shown enormous capital accumulation potential. Large amounts of capital entered the industry, bringing it into the golden age. According to iResearch, almost ten thousand education companies were added to the market from 2011 to 2020. And starting in 2014, the industry receives more than 10 billion yuan of investment annually.

To regulate the blowout education industry, and at the same time to reduce students' burden after school, China's education ministry and State Council issued papers to guarantee the safety of training places and the high quality of teachers, which inevitably increased the entry barrier of the industry.

The tightening of policies led to the prudence of capital, which in turn intensified the cash flow strain of education companies, and unlike online education, which is in the absence of geographic restrictions and capable of reaching out to a wider audience, off-line education bore the brunt. 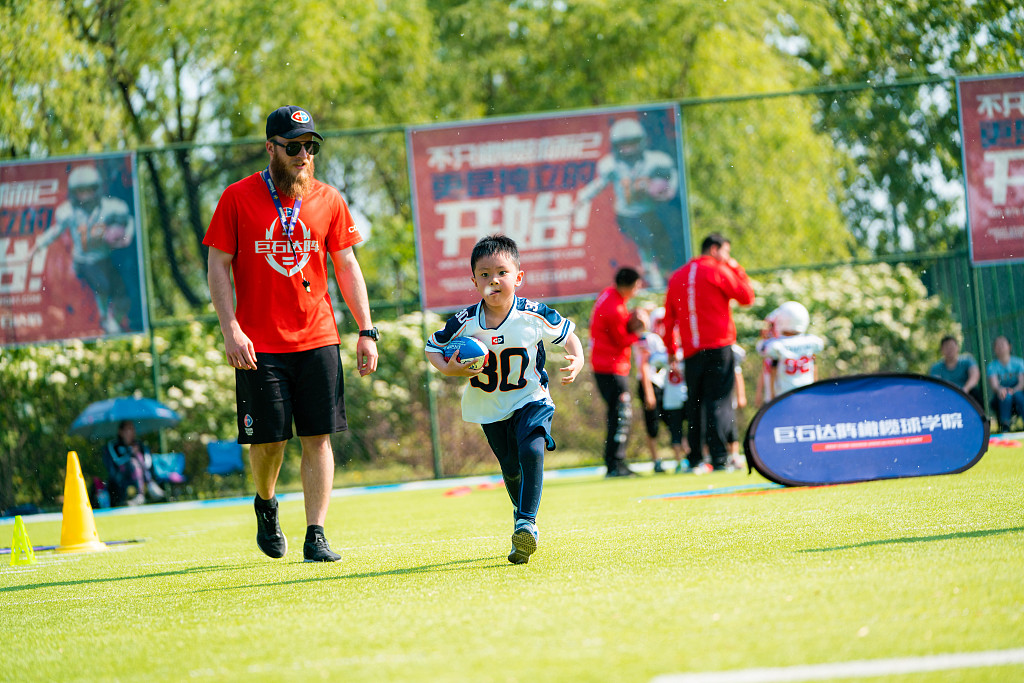 A football coach of Jushidazhen is training a boy in a park in Beijing, May 2, 2019. /CFP

A football coach of Jushidazhen is training a boy in a park in Beijing, May 2, 2019. /CFP

The policy regulated that companies should buy personal safety insurance for students and provide each of them an area of no less than three square meters when they take classes. Companies are forbidden to hire on-job teachers in primary and secondary schools and collect advance money for more than three months. The paper also stipulated that local governments should strengthen the supervision of the use of the advance money.

At the time, many didn't qualify the standard: some operated without a license; some tricked consumers into paying the fee in advance for one to two years by giving attractive discounts, and some used the advance money for investment without supervision.

Under regulations, off-line education companies have to expand their space to ensure the three-meter policy was met, which leads to high rent. Additionally, buying insurance and the lack of high-quality teachers increased their cost, which strained their cash flow further. But as capital now is prudent, companies which have got used to outpouring investment and ever-expanding business scale, began to fizzle in an obvious way.

Xu Guanghui, a researcher of Western Securities, said that the education industry used to be one of the favorites of capital, and many of them relied on investors heavily, keeping burning money to expand their market scale. But as their management capability is poor, it's easy to die once the policy tightened, and investors stopped investing.

The COVID-19 is the last straw breaking the camel's back. With very little revenue, loads of rent and salary bills, these companies just collapsed, Xu said. But he added that this is not a bad sign as the market will finally decide who's capable of staying, and those who soldier on to the last will provide better education to consumers.