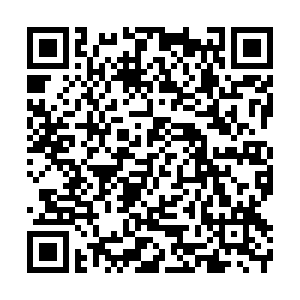 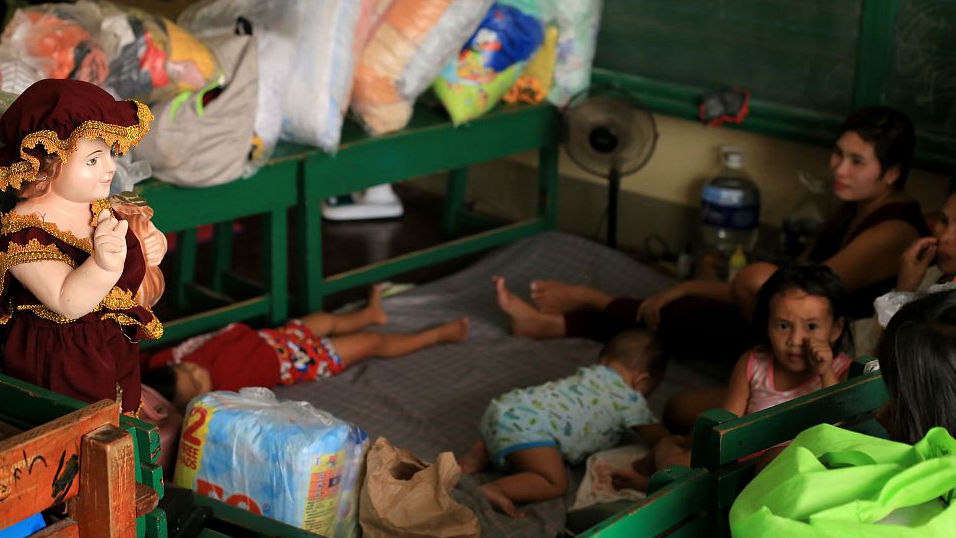 A woman and her children live in a temporary shelter in Legazpi, Albay, Philippines, October 31, 2020. /CFP

A woman and her children live in a temporary shelter in Legazpi, Albay, Philippines, October 31, 2020. /CFP

At least 20 people died as Typhoon Goni pounded the Philippines on Sunday, officials said Monday, adding that communications to the worst-hit areas remain cut off.

Goni, the strongest typhoon to batter the Philippines this year, made landfall in Bicol, the southernmost region of Luzon, early on Sunday morning, the state weather bureau said.

Video footage by news channels and on social media showed storm surges in some coastal towns, rivers overflowing, and dikes destroyed, submerging villages in the Bicol region. Some houses were buried under volcanic mudflows, and power supply and communications service were cut off.

The storm weakened further after making a third landfall in southern Luzon, but the weather bureau warned another cyclone, tropical storm Atsani, has entered the country and could gain strength.

The world's strongest storm this year, which was a super typhoon when it initially hit eastern provinces, made a third landfall in Quezon province before it weakened with 165 kph sustained winds and gusts of up to 230 kph.

By late afternoon, Goni was spotted moving towards Batangas and Cavite provinces, south of the capital Manila, where residents could experience "destructive winds and intense rainfall" by night time, the weather bureau said.

The disaster management agency has not confirmed the reported deaths.

In Quezon, Governor Danilo Suarez said power supply was cut in 10 towns as Goni toppled trees. About 347,000 people were in evacuation centers, said disaster management chief Ricardo Jalad, lowering the figure of nearly a million reported by the agency on Saturday. 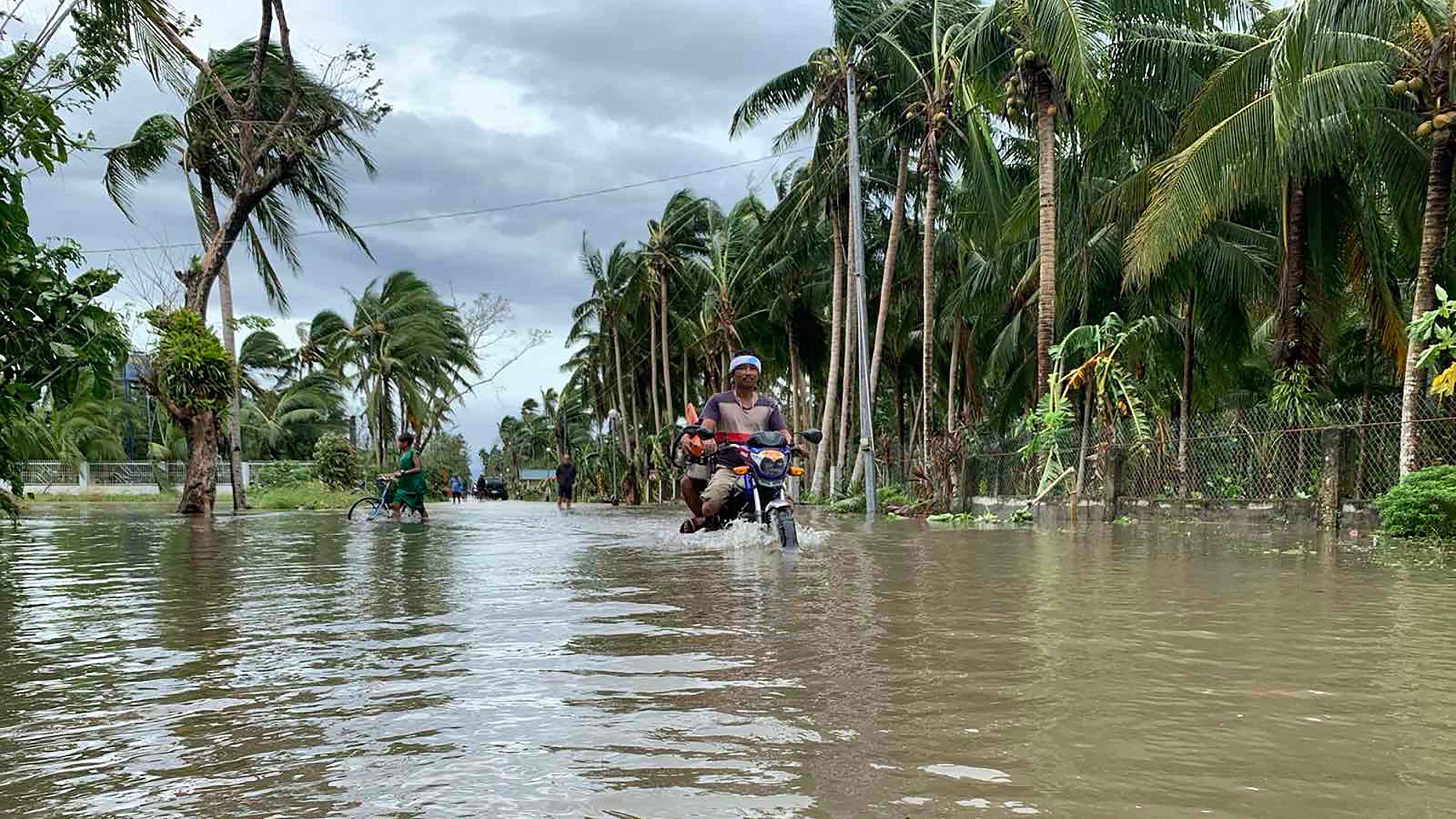 "Storm surges are imminent on our east coast. We are monitoring Mayon and Taal volcanoes for possible volcanic mudflows," said Mark Timbal, spokesman for the National Disaster Risk Reduction and Management Council.

Preparations have been made complicated by the COVID-19 pandemic, which has already caused 380,729 infections and 7,221 deaths in the Philippines.

"Evacuating people is more difficult at this time because of COVID-19," said Alexis Naz, spokesman for regional civil defense in Bicol.

Hundreds of people have been left stranded after the coastguard ordered ferries and fishing boats into port in expectation of rough seas throwing up 16-meter waves. 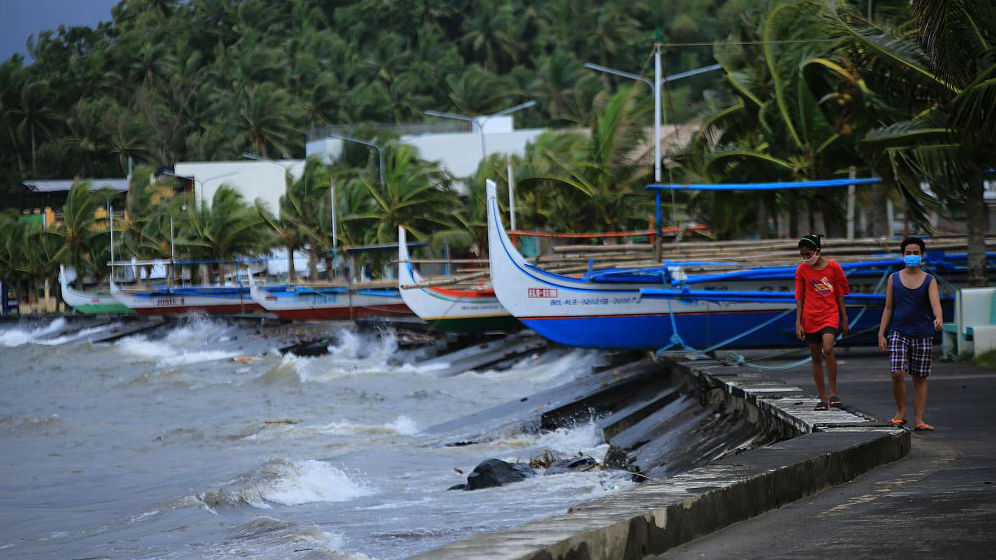 Residents walk past parked wooden boats along a boulevard in Legazpi, Albay, the Philippines, October 31, 2020. /AFP

Residents walk past parked wooden boats along a boulevard in Legazpi, Albay, the Philippines, October 31, 2020. /AFP

Ports and airports were shut, and schools, gyms and government-run evacuation centers were being used for emergency shelters.

Relief goods, heavy machinery and personal protective equipment were being moved into areas of need, but a local mayor in Quezon Province said the pandemic had depleted their funds for disaster emergencies.

Goni is expected to weaken as it crosses southern Luzon and enters the South China Sea early Monday, according to the state forecaster.

The Philippines is hit by an average of 20 storms and typhoons every year, which typically wipe out harvests, homes and infrastructure, keeping millions of people perennially poor.

Its deadliest on record was Super Typhoon Haiyan, which unleashed giant waves on the central city of Tacloban and left more than 7,300 people dead or missing in 2013.