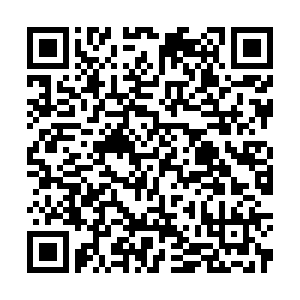 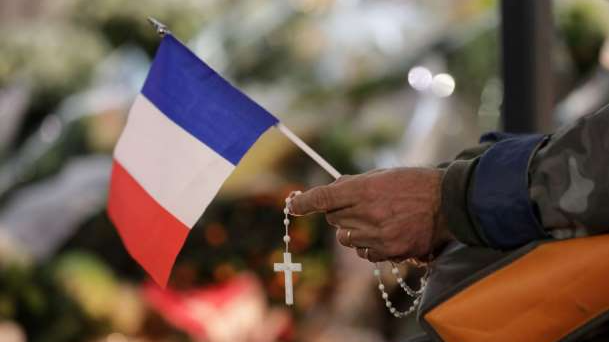 A man prays in front of the Notre Dame church to pay tribute to the victims of a deadly knife attack in Nice, France, October 31, 2020. /Reuters

A man prays in front of the Notre Dame church to pay tribute to the victims of a deadly knife attack in Nice, France, October 31, 2020. /Reuters

The division was visible on Parisian streets last week, with scores of Muslims chanting Islamic prayers on one side while a band of protesters loudly singing the French national anthem on the other.

Two gruesome attacks that authorities ascribed to "Islamist terrorism" over the the past two weeks have left France reeling from devastation and confronted with a crucial question: Can religion coexist with the country's secular ideals?

On Thursday, three people were killed during an attack at a Catholic church in the southern French city of Nice. Two of the victims – a 55-year-old church-keeper and a 60-year-old woman – had their throats slit while a third escaped to a nearby bar but died from injuries shortly after.

The suspect, whom French authorities later identified as a 21-year-old Tunisian migrant, yelled the Arabic phrase "Allahu Akbar" before he was shot by police and hospitalized.

The attack in Nice came on the heels of the killing of a middle school teacher who was decapitated in the street less than two weeks earlier in the suburbs of Paris. The victim, Samuel Paty, was targeted because he showed a depiction of the Prophet Mohammed during a class on free speech.

Since Paty's murder, French officials have unleashed a broad crackdown in the country's Muslim communities, carrying out out dozens of raids and arresting those suspected of being radicalized. 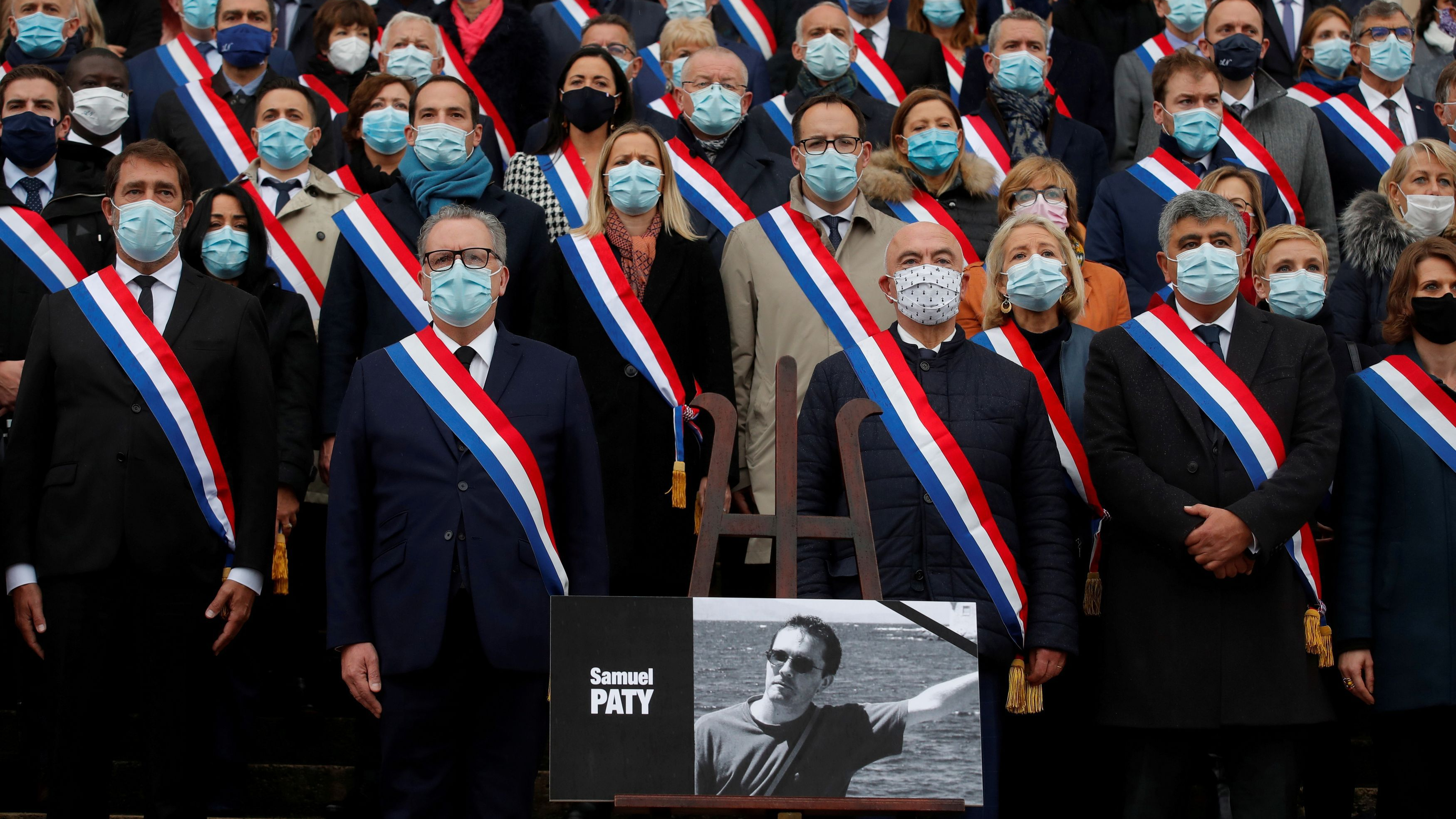 French lawmakers gather to homage to Paty on the steps of the National Assembly in Paris, October 22, 2020. /AP

French lawmakers gather to homage to Paty on the steps of the National Assembly in Paris, October 22, 2020. /AP

The successive attacks have also yielded outrage from French politicians especially those on the right, including Nice's Mayor Christian Estrosi, who called for abandoning the laws of peacetime and definitively destroy "Islamofascism" in the country.

"This situation calls for a strategy of reconquest," said President of the National Rally Marine Le Pen. "Islamism is a bellicose ideology whose means of conquest is terrorism."

After Paty's killing, French President Emmanuel Macron went on a staunch defense of the country's secularism and suggested that Islam was in need of an "enlightenment." The remark triggered widespread protest in Muslim communities around the world from Turkey to Bangladesh. It was also this comment that angered the Tunisian assailant and possibly motivated him to go on a rampage in Nice, according to media reports.

The murder of Paty has reignited the national debate on the right to offend, which came to the center of attention after the massacre at the office of Charlie Hebdo – a satirical magazine that regularly mocks all religions, including caricatures of the Prophet Mohammed.

In January 2015, two gunmen forced their way into the magazine's office in Paris and murdered 12 people inside for making provocative drawings of the Prophet – an act that many Muslims considered hugely offensive.

While the Quran does not explicitly prohibit the depictions of Mohammed, Muslims have long been discouraged to produce any visual representations of the prophet in order to avoid idol worship, which is forbidden in the religion.

The artwork of French street artist Christian Guemy, also known as C215, in tribute to members of satirical magazine Charlie Hebdo, is seen painted on a facade near the magazine's former offices in Paris, France, August 28, 2020. /Reuters

The artwork of French street artist Christian Guemy, also known as C215, in tribute to members of satirical magazine Charlie Hebdo, is seen painted on a facade near the magazine's former offices in Paris, France, August 28, 2020. /Reuters

Yet, many in the West including France consider the "right to offend" as a sacred part of the right to free speech. This right have been most vigorously exercised through controversial literature and TV shows such as "South Park" – an American adult cartoon known for making cruel jokes on sensitive topics ranging from race to religion.

Clashes between Western and Islamic values on the subject have also gotten notably intense in the recent decade and culminated during the "Everybody Draw Mohammed Day" in 2010. The movement was in response to death threats made to the creators of South Park for its portrayal of Prophet Mohammed.

Many pro-speech thinkers have pointed out the over-the-top mockery of other religions in the same episode at question, including Buddha snorting cocaine, and wondered why non-Muslims aren't allowed to make jokes.

"The killing is not an act that as a Muslim I would approve. But while I believe in the freedom of expression, I do not think it includes insulting other people. You cannot go up to a man and curse him simply because you believe in freedom of speech," wrote former Prime Minister of Malaysia Mahathir Mohammed on Twitter.

Just days before Paty's murder, Macron warned of the dangers of religious extremism: "There is in this radical Islamism, a methodical organization to contravene the laws of the Republic and create a parallel order, to erect other values."

For decades, the French government has actively sought to integrate the country's sizable Muslim population into a liberal society governed by the principle of "laïcité" or "state secularism" which mandated the state's neutrality on religion.

Although tried with different approaches, as observed by The Atlantic writer Karina Piser, the overarching goal of French presidents since the 1980s has been to create a more moderate brand of Islam unique to France. Namely, transform Islam in France to Islam of France. 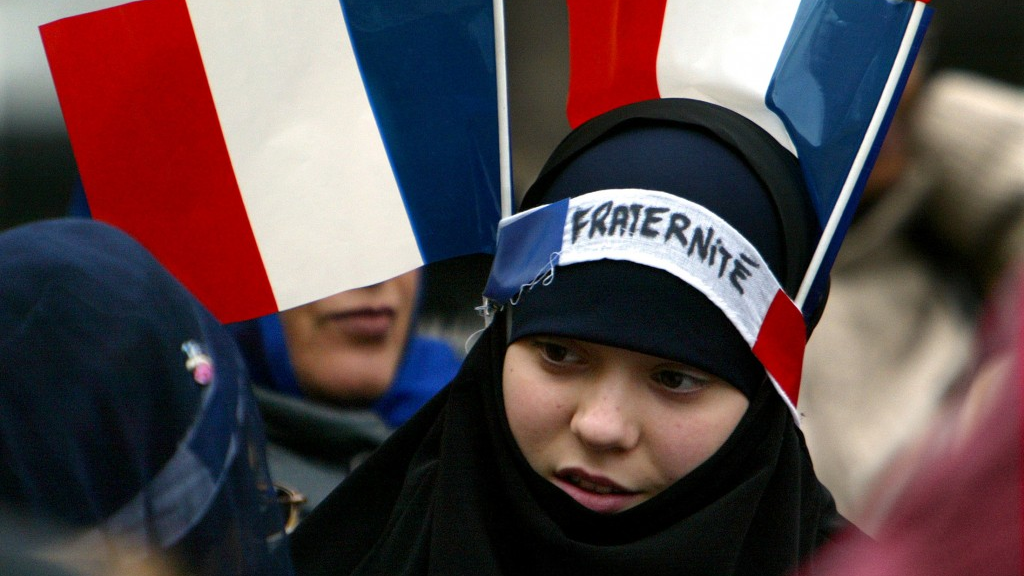 A young Muslim girl has two French flags and a headband reading "Fraternity" on her headscarf while marching to protest a French ban on religious symbols in state schools, Paris, January 31, 2004. /Reuters

A young Muslim girl has two French flags and a headband reading "Fraternity" on her headscarf while marching to protest a French ban on religious symbols in state schools, Paris, January 31, 2004. /Reuters

However, as reminded by the recent tragedies, the task of managing the belief system of some six million Muslims – or nearly nine percent of France's total population, the highest of such percentage in Europe – is far from easy.

Many French Muslims view the French government's approach with suspicion, especially with the country's unresolved colonial legacy in the Arab-Muslim world in mind.

In recent years, the rise of ISIL and increased domestic terror attacks inspired by its ideology has transformed France's cultural assimilation issue into a security one, according to experts. Since 2013, at least 1,700 French nationals have joined ISIL with several behind the attacks in France between 2015 and 2016.

As the recent attacks inspire a new wave of anti-Islam sentiment and right-leaning views, many French Muslims begin to wonder about their place in the country while some question if the system is fair at all.

"There's a hyper-politicization of Islam in France, but Muslims are largely kept out of the conversation," Amel Boubekeur, researcher at the University of Grenoble who specializes in French Islam told France 24. "And so are the academics who carry out real research, but are chased away by TV pundits."