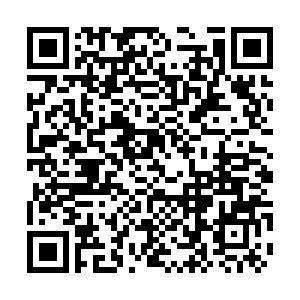 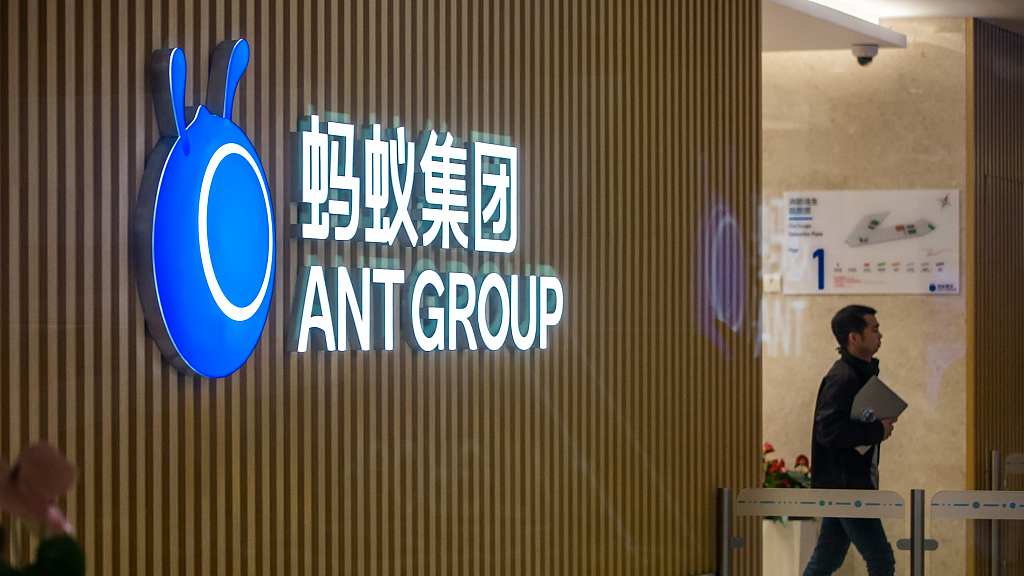 The Chinese fintech giant, which spans sectors such as payment, credit, asset management and insurance, is poised to raise $34.4 billion in a record IPO surpassing Saudi Aramco's $29.4 billion float last year, valuing the company at about $315 billion based on filings.

The Hangzhou-based company, launched in 2004 and previously known as Ant Financial, is the fintech arm spun out of Alibaba Group and the parent company of China's largest mobile payments business Alipay, which has over 700 million monthly active users in the country.

Although the authorities did not disclose any reasons for the summoning of the Ant Group executives, such act is often considered a warning to a company over regulatory issues.

"Ant Group will implement the talk's opinions in depth," the company said in a late-night statement after the talk, adding that it will stick to guidelines including stable innovation, supervision and service to the real economy.

Financial News, a newspaper run by China's central bank, ran a series of articles over the weekend warning about possible catastrophic financial disorders had a major trouble broke out at a mammoth fintech company like the Ant Group, which boasts more than one billion users.

Possible risks including unfair competition, data breaches and systemic risks should also be noticed, the article said. Relevant measures should be formulated and supervision should be further strengthened to ensure financial stability and security.

Guo Wuping, an official with the consumer rights protection department of the banking regulator, is blunter in naming Ant Group's lending service Huabei and other fintech companies' similar products, saying the fintech companies have been taking advantage of the lack of regulations and competing unfairly with licensed financial institutions, and some services have been infringing upon consumers rights.

"Fintech is a technology-driven innovation on financial sectors. Its foothold is finance, and its essence is financial services. Therefore, emerging fintech companies are similar to licensed financial institutions, and their customers are financial consumers," Guo said in the article.

He further explained that fintech firms' products such as Alipay's Huabei (or Ant Check Later), Jingdong's Baitiao and Suning's Ren Xing Fu have no essential difference with bank-issued credit cards, and Alipay's Jiebei, Jingdong's Jintiao and WeBank's Welidai are not essentially different from banks' microloan products.

"Compared with licensed financial institutions, fintech companies tend to form excessive credits to stimulate advanced consumption so that some low-income groups and young people are trapped in debt, ultimately harming consumers' rights, and even deal a blow to families and society," Guo noted.

Guo stressed that regulators should also carry out investigations on fintech companies, and step up law enforcement and justice on anti-monopoly and anti-unfair competition to prevent a winner-takes-all situation and protect consumers' rights on free and fair trade.

The banking regulator also published draft rules for online micro-lending late Monday, which would impose a cap on lending amounts to individual borrowers as well as the leverage level. The rules will be tougher for online lenders like Ant that will be required to shoulder default risks together with banks.

It is arguable whether Ant is a technology vendor that uses artificial intelligence and other sophisticated techniques for financial institutions, or a financial holding company that should be subject to regulations regarding capital and leverage similar to banks.

The group's CEO regularly stressed technology is in the firm's DNA. "Since our inception over 16 years ago, digital technology has been part and parcel of everything we do," Hu said. Its prospectus said that over 60 percent of Ant's employees are engineers and programmers.

Ant began its fin-to-tech shift two to three years ago, when Chinese regulators beefed up scrutiny on peer-to-peer lending, where investors side-step traditional lenders like banks to lend directly to borrowers, to forestall financial risks in the system.

Since 2019, over half of the company's revenues have been generated by its digital finance technology sector, and the proportion is increasing. As of June 30, 2020, its consumer credit balance was 1.7 trillion yuan ($250 billion). 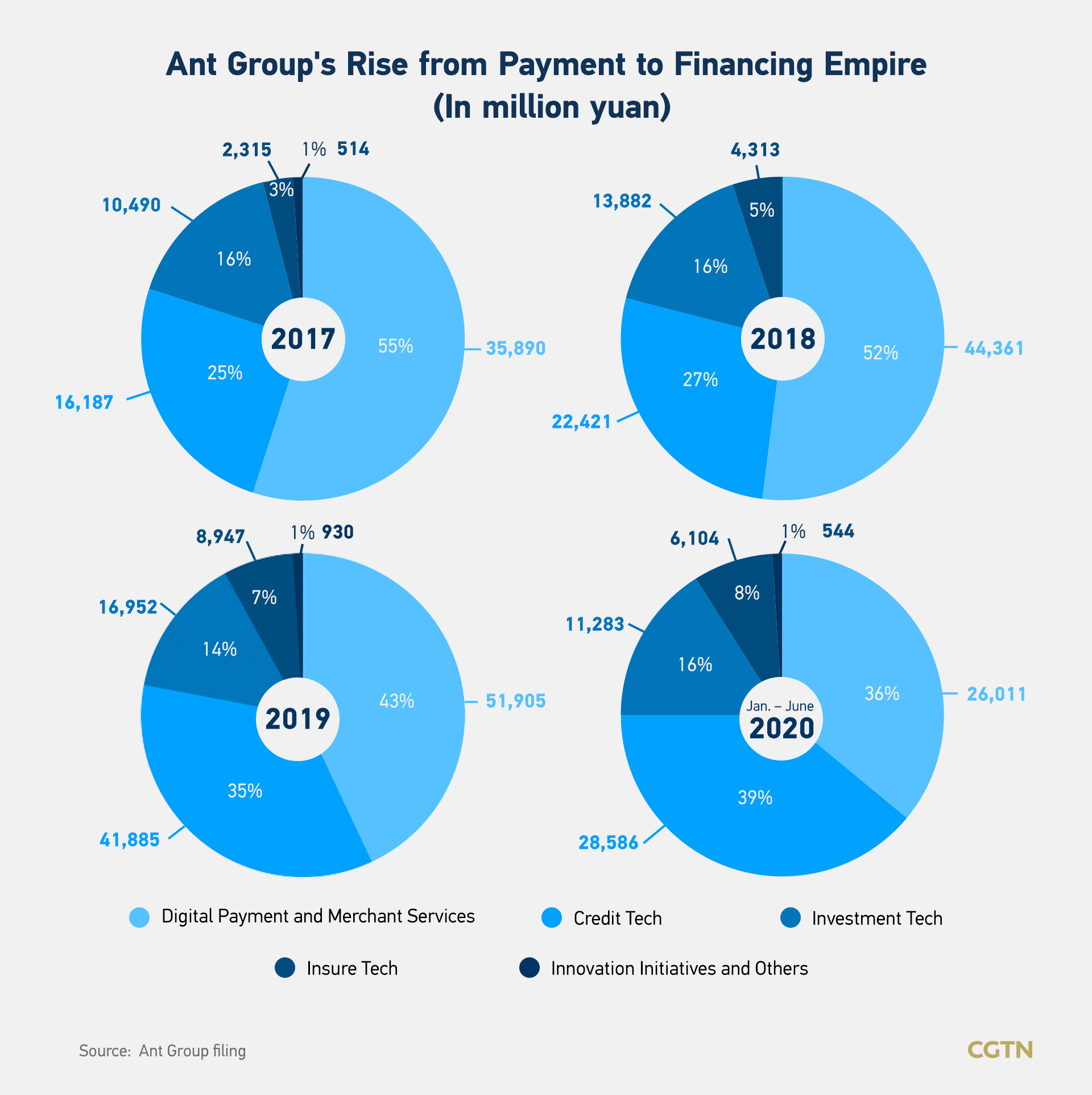 Lead founder Ma called financial regulation outdated at the Bund Summit held in Shanghai on October 24, saying it is badly suited to companies trying to use technology to drive financial innovation.

Ma's remarks on regulators point to a deep conflict between fintech growth and financial regulation, according to Ji Shaofeng, a former official with the banking regulator.

"Although Ant is trying to phase out of its financial identity and emphasize itself as a digital technology firm, the dominant part of its revenue, which comes from its credit business, and its high leverage ratio have always attracted the wide notice of both regulators and the capital markets," Ji said in a column for Caixin.

Vice Finance Minister Zou Jiayi said at the Bund Summit that fintech hasn't changed the nature of finance relying on credit and conducting leverage, and fintech firms must not be allowed to dodge regulation.

Martin Chorzempa, a research fellow at the Peterson Institute for International Economics in Washington, told the CGTN on Tuesday that the possible regulatory tightening on the fintech sector is not necessarily a result of Ma's challenging the regulators.

"It's just the latest in a long line of steps to reign in risks, from the Netsunion system (China's online payment clearinghouse) and risk reserves of 100 percent in PBOC in payments, reversal on the pilot for Sesame Credit and previous rules that limited ability of small loan companies to issue ABS (asset-backed securities) with little capital," he said.

(Wu Gang contributed to this story.)

(Liu Wenbo contributed to the graphics.)