How U-turn Boris has made Britain's future bleak
Tom Fowdy 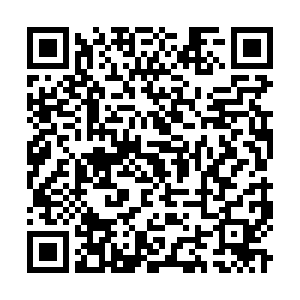 EU Chief negotiator Michel Barnier is followed by pro-EU campaigner Steve Bray as he walks to his hotel during a break in talks in London, England, October 28, 2020. /Getty

EU Chief negotiator Michel Barnier is followed by pro-EU campaigner Steve Bray as he walks to his hotel during a break in talks in London, England, October 28, 2020. /Getty

On Sunday, the government of Boris Johnson abruptly announced that the United Kingdom would be, as from Thursday, entering into a national lockdown for a month as COVID-19 spirals out of control. The shutdown is the second of its kind this year.

It came despite the government having insisted for weeks and weeks, as cases grew, that it did not want to do so and sought to introduce a regional "tier warning" system.

However, these containment efforts, as well as the government's "test and trace" system didn't work, and that the country had already passed the "worst-case scenario" by October and that if no serious action was taken, deaths could escalate rapidly. Thus, in a manner very similar to March, the government has U-turned and followed suit with other countries in Europe.

Not surprisingly, public support for the Conservative government is collapsing rapidly. Whilst a lockdown is necessary, its imposition as a last-minute U-turn constitutes a humiliation for Boris Johnson and a serious blow to his credibility.

In the long term, however, it also leaves Downing Street without a clear plan or strategy for the British economy. Already the worst hit amongst the G7 nations, the government had gambled everything on sustaining a reopening and now have been forced to retreat, with another hammer blow to GDP on the horizon. It comes on top of uncertainties being posed by Brexit and China hawks having undermined the prime minister. One truly wonders if the country will ever truly recover.

"This is going to be a fantastic year for Britain," tweeted Boris Johnson at the New Year. One might have forgiven him for genuinely having no clue as to what lay ahead, yet in using such a quote to play up the prospects of Brexit, such comments reflected an intrinsic lack of realism concerning Britain's situation and an emphasis on rhetoric above serious planning. 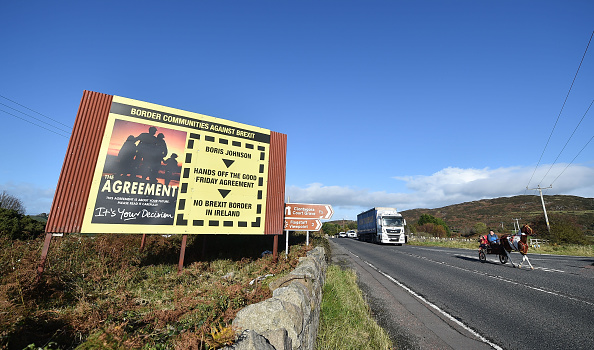 A man and his child rides their horse and cart past a fresh anti-Brexit billboard highlighting the Good Friday peace agreement as they cross the border between Ireland and the United Kingdom, Newry, Northern Ireland, October 27, 2020. /Getty

A man and his child rides their horse and cart past a fresh anti-Brexit billboard highlighting the Good Friday peace agreement as they cross the border between Ireland and the United Kingdom, Newry, Northern Ireland, October 27, 2020. /Getty

Subsequently, the government did not take early warnings of COVID-19 seriously and failed to inform the public of its gravity, focusing only on lightweight campaigns such as "Wash Your Hands" until it was too late. Then, following everyone else, came the rushed imposition of a national lockdown, marketed as "Stay at Home." Boris himself contracted the virus.

The government subsequently moved to vent public anger at the situation by throwing one of Britain's key economic relationships on the fire: China. British Cabinet Officials stated the government's inaction was caused by "Beijing's coverup" and promised a "reckoning" playing upon racist and orientalist stereotypes to create a discourse that such a superior country could never have found itself in such a situation. Hawks in the Conservative Party subsequently seized their moment, and herein came the first big U-turn of the year, a retreat on Huawei's participation in 5G despite a security services review having branded it as safe. But such only revealed the impulsive and short-sighted nature of the government.

Thus, it is no surprise that only months after the first lockdown ended; the country was back to square one, revealing just how shallow it was to blame Beijing. There was no deception from China's behalf, only British incompetence. The government's "test and trace" system simply didn't take off, the public failed to take new rules seriously and the disastrous "eat out to save the economy," which has now squandered billions on restaurants now forced to close yet again, created a perfect storm which suggests the government literally learnt nothing. At each stage of the crisis, just like his Brexit rhetoric, Boris Johnson did not have a plan, only impulses, and tunnel vision at best.

Thus, the British government now stumbles into a severe escalation of the same crisis with no plan and no strategy, to either defeat the virus or save the economy. Even before the second COVID-19 wave took hold, Britain's GDP was forecasted to shrink 9.8 percent by the end of 2020. This is already an economy rocked by Brexit uncertainty and before the COVID-19 world, expected just 1.1 percent growth.

With the government having already invested hundreds of billions to mitigate the initial COVID-19 slump, the picture looks even worse. Ultimately, the Prime Minister's so-called vision for a "global Britain" is a pipe dream which has no correspondence with reality and actual circumstances whatsoever, and having now been in office for a full year, this, unfortunately, depicts his entire premiership: impulsivity, indecisiveness and impracticality. The legacy of these mounting crisis are likely to deal a blow to the country which will linger for a long time, thus we end by asking will Britain ever be the same again?