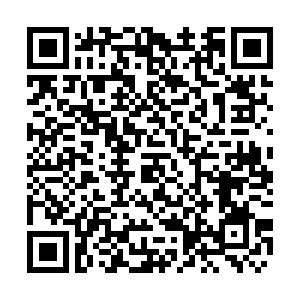 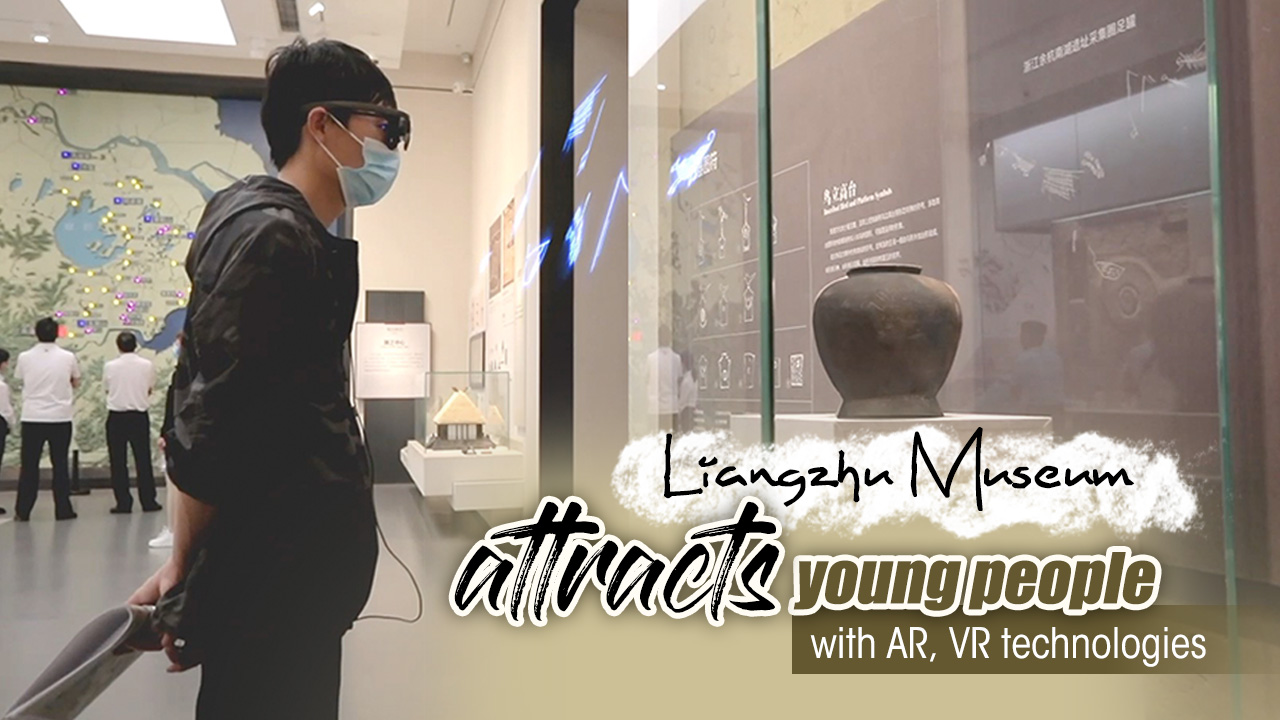 Bird pattern carved on a jade disc, or yubi in Chinese, comes alive. The bird flies out of the jade disc and circles around, while an audio guide introduces the cultural relic and the bird's connotation. Such is the experience of watching a cultural relic through a pair of augmented reality (AR) glasses. 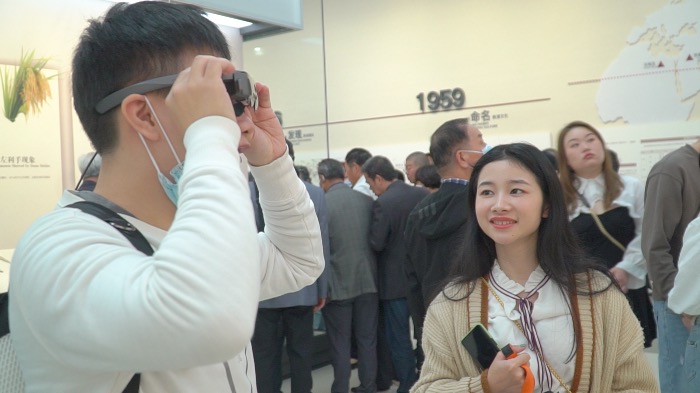 Rong Mei (R) and her friend try the AR glasses guide at the Liangzhu Museum. /CGTN

Rong Mei (R) and her friend try the AR glasses guide at the Liangzhu Museum. /CGTN

"Compared with traditional ways of appreciating a cultural relic, AR glasses guide has virtual images which help people visually perceive the information behind the relic, such as in which life scenarios was the relic used, its function and its cultural connotation," said Zhou Liming, director of the Liangzhu Museum.

From exquisite jade artifacts to pottery, the museum displays various burial objects found in the Archaeological Ruins of Liangzhu City in Hangzhou, east China's Zhejiang Province, showcasing the civilization of prehistoric rice agriculture and a state-level society between 3,300 B.C. and 2,300 B.C. The site was included on the UNESCO World Heritage List in July 2019, providing profound and compelling evidence that Chinese civilization started 5,000 years ago. 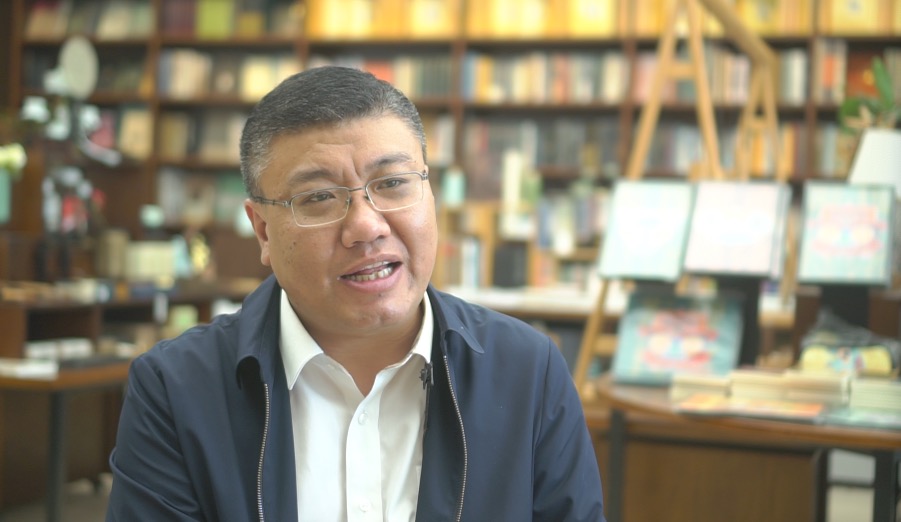 During the test period, 50 AR guides were deployed in the museum with full load operation as people lined up to have a try. "I found that most students were very curious about it, and it could inspire students to have the desire to learn more," said Chen Xi from Rokid Corporation Ltd., the AR glasses provider.

"We use modern technology to tell Liangzhu's ancient story," said Zhou. "5,000 years ago is too many years ago. How to let the young people perceive and feel close to cultural relics through modern technology is an important task at the museum."

From digitalization to intelligentization, the Liangzhu Museum took more than five years. It started to collect the digital information of the ruins and relics in 2015, which is what Zhou called the version 1.0 of the museum's digital infrastructure. It paves the way for the museum to deliver Liangzhu's story through multimedia approaches to attract more people, especially the youth.

During the temporary closing due to the COVID-19 epidemic, the Liangzhu Museum was one of the first museums in the country to introduce online exhibitions and live-streaming tours, attracting over 100 million viewers.

In the Archaeological Ruins of Liangzhu City, the digital experimental hall is one of the most popular destinations.

Wearing a virtual reality (VR) headset and holding two game controllers, users can experience fishing and deer hunting, getting a feel of how the people in Liangzhu lived. In another game, users can see the state's Mojiaoshan Palace and participate in Liangzhu people's sacrificial ceremony, getting acquainted with their beliefs and social hierarchy.

The hall also has a 50-meter-long screen showing animated living and working scenarios of Liangzhu ancients, such as building houses, planting rice and making jade artifacts and pottery. 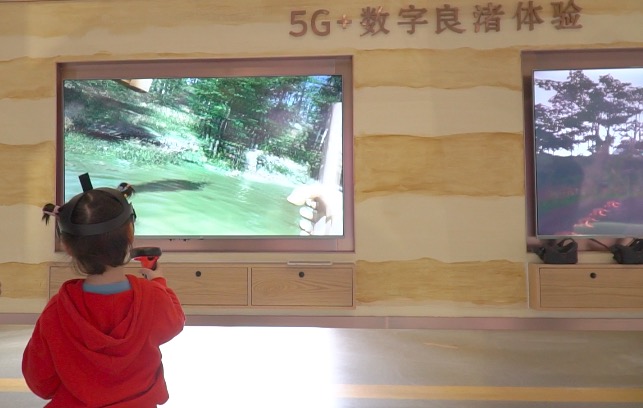 A girl plays a VR game at the digital experimental hall in the Archaeological Ruins of Liangzhu City. /CGTN

A girl plays a VR game at the digital experimental hall in the Archaeological Ruins of Liangzhu City. /CGTN

"Young people have their own aesthetic taste and reading habits. We use modern technology to bridge the gap between young people and cultural relics. Now the Liangzhu Museum has become a popular destination among the youth," said Zhou.

Since renovating its permanent exhibitions in June 2018, the Liangzhu Museum has received more than 2.2 million visitors, mostly young people. Even as the museum capped the number of daily visitors at 4,500 after it reopened in March in the post-epidemic times, the museum had still attracted 500,000 visitors by the end of October, half of whom were teenagers and children.

Although technologies have successfully helped the museum win people's hearts, Zhou emphasized that the museum should adopt appropriate technologies according to the content displayed and audiences' needs rather than purely pursuing the new technology.

A part of the 50-meter-long screen shows animated living and working scenarios of Liangzhu ancients at the digital experimental hall in the Archaeological Ruins of Liangzhu City. /CGTN

A part of the 50-meter-long screen shows animated living and working scenarios of Liangzhu ancients at the digital experimental hall in the Archaeological Ruins of Liangzhu City. /CGTN

"The museum should fulfill its primary role as a museum – to collect, research and display (relics)," said Zhou, adding that the research on Liangzhu culture laid the foundation for the digitalization and intelligentization of antiques and the museum.

"We will continue the construction of the version 2.0 of the museum's digital infrastructure based on version 1.0, and use AR, VR and MR technology. We would also introduce robots in the museum in the future and use them as guides," said Zhou. "I think there is a lot of room for the use of technology in the museum, and the prospects are promising."