How not to flex online: Humblebraggers mocked in China
By Zhou Minxi 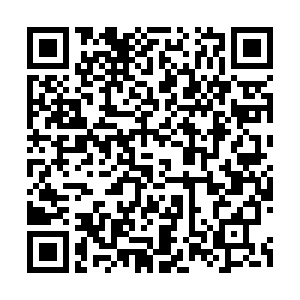 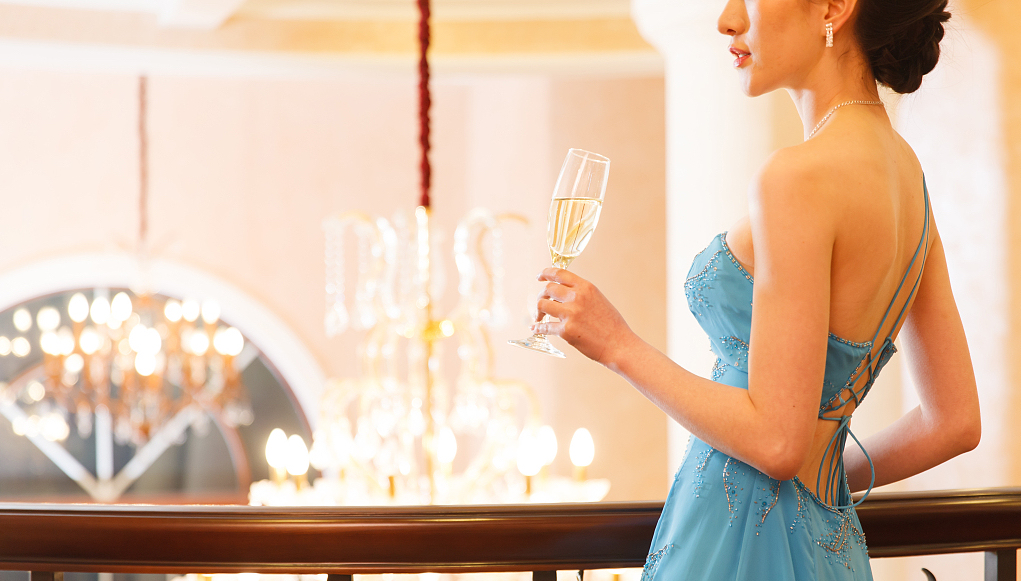 Consider the following statement: "My husband bought me a pink Lamborghini …" The correct way to finish the sentence, according to some, is not showing appreciation or acting excited, but to complain about the pricy gift. If you say, "The color is so ugly, men have such bad taste!" Congratulations, you have mastered the subtlety of "Versailles literature."

The term has nothing to do with the French palace nor with literature. It came from the Japanese manga series "The Rose of Versailles" based on the life of Marie Antoinette and was coined by a Chinese influencer earlier this year. Apparently, ostensive wealth, glamor, and "let them eat cake" style privilege of the 18-century queen is precisely the impression a Versailles writer aims to exude.

Also known as humblebragging, it is a boast disguised as a complaint. "I have too many houses. How can I decide which one to decorate?" "I thought I lost weight this morning. So disappointed when I realized it's because I took off the huge diamond ring my husband gave me last night" are some examples of "Versailles literature." The intention is to show off – usually things of materialistic values, yet one ought to pretend that's not the point. Japanese manga series "The Rose of Versailles" about the lavish life of Marie Antoinette is the inspiration behind the latest internet meme. /ladyoscar.com

Japanese manga series "The Rose of Versailles" about the lavish life of Marie Antoinette is the inspiration behind the latest internet meme. /ladyoscar.com

Now, Chinese internet users have discovered the art of flexing with fake humility and turned it into a meme. Topics related to "Versailles literature" topped Weibo searches this week, attracting hundreds of millions of views after blogger MengQiqi77's posts about her envy-worthy life went viral, sparking a deluge of parodies.

Among her typical updates, MengQiqi77 complained about not knowing her own address since she lives in a villa complex, nannies checking out her perfect husband, and the sales staff at a high-end Beijing department store judging customers with a single glance at their shoes.

Why it is annoying

Judging by the amount of ridicule these posts incited, they can often backfire on the author. Humblebragging is not new, and as it turns out, it is also universally disliked.

As the 19-century English author Jane Austen famously wrote, "Nothing is more deceitful than the appearance of humility." The psychology behind humblebragging is to be recognized for one's successes and be liked by others at the same time, according to scholars. "The humblebragger recognizes that it's hard to be liked and be a showoff at the same time," said psychologist Dr. Susan Krauss Whitbourne at the University of Massachusetts Amherst.

In her article titled "Why people hate humblebragging" published in Psychology Today, Whitbourne noted that the humblebrag is a "strategy in pursuit of respect" because it draws attention to one's accomplishments, albeit in a circuitous fashion.

However, studies on social media users show that humblebragging, as a self-promotion strategy does not work. In their 2018 essay, "Humblebragging: A distinct – and ineffective – self-presentation strategy," University of North Carolina researcher Ovul Sezer and Harvard University scholars Francesca Gino and Michael Norton concluded from their research that humblebraggers are perceived more negatively than straight braggers due to the former's insincerity.

"The critical factor differentiating these strategies was sincerity. People don't like braggers, but they at least see them as more sincere than humblebraggers," said Whitbourne. 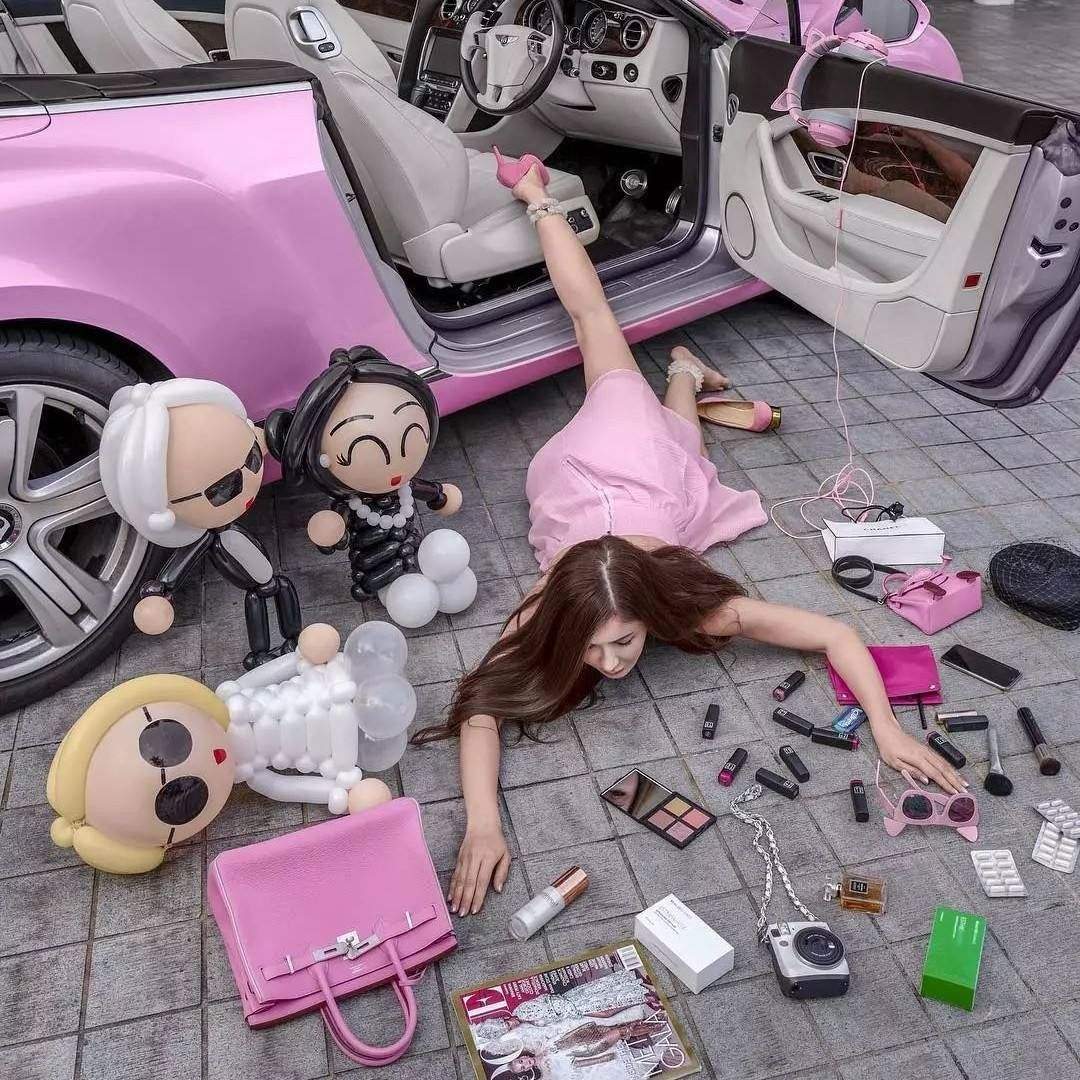 Chinese social media users take part in the 2018 "flaunt your wealth" challenge, in which one pretends to fall out of their luxury car with other expensive items spilled all around them. /Weibo

Chinese social media users take part in the 2018 "flaunt your wealth" challenge, in which one pretends to fall out of their luxury car with other expensive items spilled all around them. /Weibo

The notoriety of "Versailles literature" in Chinese cyberspace comes on the heels of a string of jaw-dropping revelations about influencers' glamorous lifestyle, adding to suspicion of inflated vanity enabled by social media.

A month ago, a Shanghai-based WeChat group in which young women aspire to be socialites became an instant sensation after its members were exposed to be splitting the costs of designer items and exclusive experiences, which would then be used as props and settings for their social media photos.

Meanwhile, an entire industry to help people appear rich on social media on a low budget has been thriving on e-commerce sites, promising quick results of admiration and popularity.

The Chinese are far from the only people guilty of wealth flaunting, whether real or pretend. But in the last decade, with a rapidly growing middle class, perceived privilege or the lack of it has become a particularly touchy subject for many people in the country.

An early pioneer of so-called "Versailles literature," as netizens pointed out, was Chinese millennial writer Guo Jingming, whose popular coming-of-age novels "Tiny Times" were understood to capture the zeitgeist of time when they were first adapted to a movie in 2013. With pages filled to the brim with designer names like Gucci and Louis Vuitton, Guo's work was accused of blatant promotion of what critics say was shallow materialism. 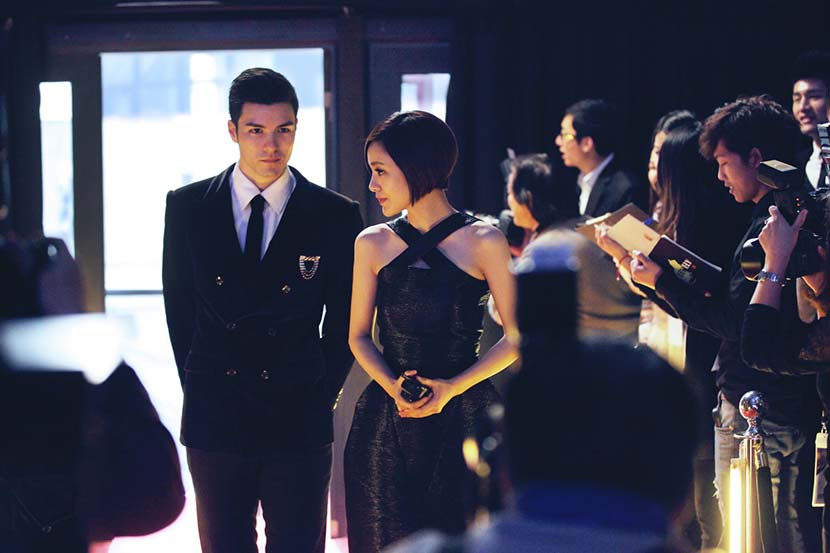 A scene from the 2013 movie "Tiny Times." The franchise has been criticized in China for promoting materialistic values. /Douban

A scene from the 2013 movie "Tiny Times." The franchise has been criticized in China for promoting materialistic values. /Douban

Despite the controversy, fiction, movies, and TV shows featuring unrealistically fortunate characters have continued to dominate popular imagination. Such stories have become so ubiquitous that Chinese netizens quickly found a goldmine of inspiration for their "Versailles literature" parodies.

While Western luxury brands become coveted status symbols for many of the newly affluent, there is also a growing awareness that in-your-face showoff is crass nouveau riche behavior and not classy.

In his international bestseller Class: A Guide through the American Status System, Paul Fussell offered some brutally honest insights into the middle-class mind:

Worried a lot about their own taste and about whether it's working for or against them, members of the middle class try to arrest their natural tendency to sink downward by associating themselves, if ever so tenuously, with the imagined possessors of money, power, and taste.
-  Paul Fussell, Class: A Guide through the American Status System

In the past decade, the rise of China's middle class, the main drivers of culture consumption, has influenced the media with their desires and aesthetics, noted Zeng Yuli, a culture commentator, in an online post. "The middle class likes using tastes to distinguish themselves from others and set class boundaries," Zeng said. "In other words, hidden beneath 'Versailles literature' is the aesthetics of the middle class."

So, how to annoy a Versailles writer back? "Just pretend you don't get whatever it is they try to show off," a Zhihu user advised others on how to troll a "pretentious narcissist" on the quora-like site. "Respond with genuine sympathy for their complaint."