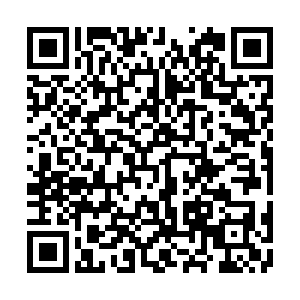 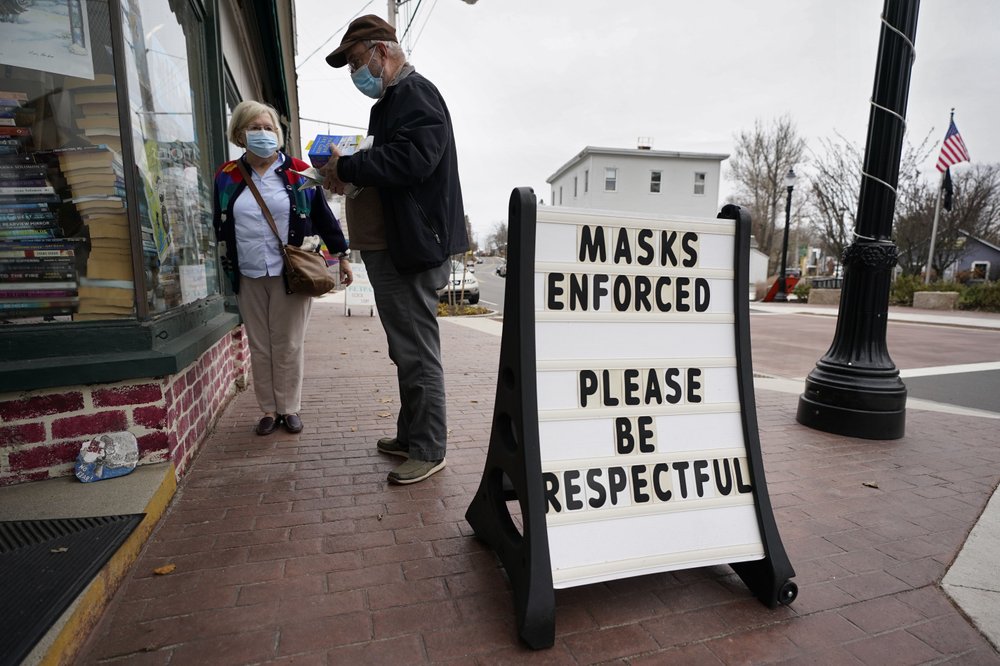 Shoppers comply with the mask regulations to help prevent the spread of the coronavirus at Bridgton Books, November 13, 2020, in Bridgton, Maine. /AP

Shoppers comply with the mask regulations to help prevent the spread of the coronavirus at Bridgton Books, November 13, 2020, in Bridgton, Maine. /AP

The U.S. is facing a long, dark winter. Deaths from the coronavirus have climbed to about 1,000 a day on average. New cases per day are soaring, reaching another all-time high on Thursday of more than 153,000. The country's patchwork of state responses to the pandemic was forced to upgrade, facing the surge of the new cases.

Since its onset, the pandemic is blamed for 10.7 million confirmed infections and almost a quarter million deaths in the U.S., with the closely watched University of Washington model projecting nearly 439,000 dead by March 1.

North Dakota has become the 35th U.S. state to require face coverings be worn in public, as the state joined 38 other states this month in reporting record daily jumps in new cases, 17 others with record deaths and 25 others with a record number of COVID-19 patients in hospitals, according to a Reuters tally.

"Our situation has changed, and we must change with it," North Dakota's Republican Governor Doug Burgum said in a statement late on Friday.

The mask order, similar to other state mandates, requires face coverings to be worn in most indoor public places and "in outdoor business and public settings when it is not possible to maintain physical distancing."

Burgum also ordered restaurants and bars to limit diners to 50 percent of capacity and close by 10 p.m., a move several other governors have made, citing data that links late-night gatherings to increased spread of the virus.

Some governors, including Iowa Republican Kim Reynolds, warned this week that their hospitals were also nearing capacity.

Iowa is among 15 states without a mask mandate, but Reynolds tiptoed in that direction on Tuesday by requiring they be worn at large social gatherings and at personal service businesses, such as barbershops and salons.

The U.S. Centers for Disease Control and Prevention (CDC) has recommended mask wearing, and one widely cited model has estimated that a nationwide mandate could save 68,000 lives by next spring. Still, the issue has become politicized with several Republican governors refusing to require them, saying it is a matter of personal responsibility, not government mandate. 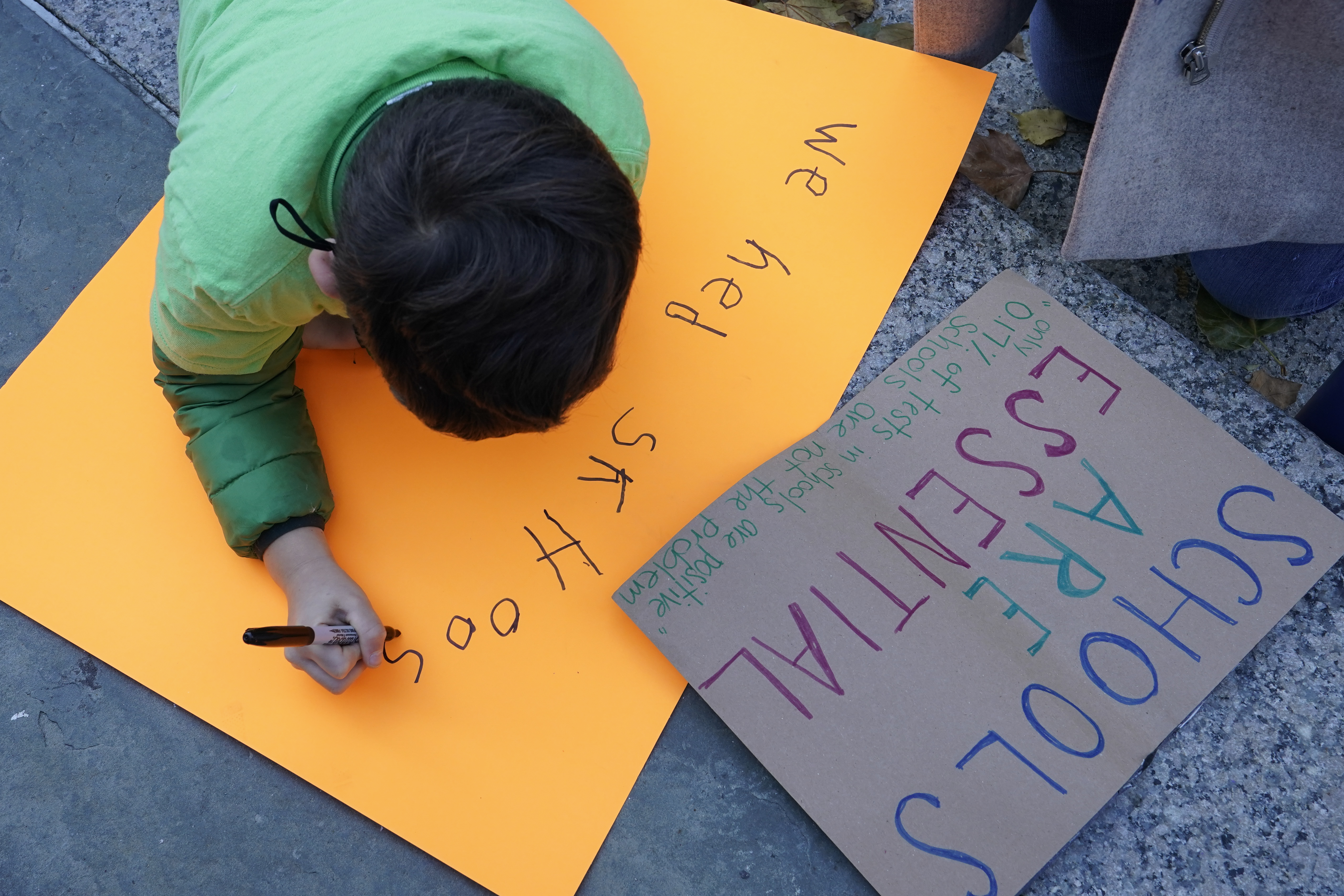 On Friday, Detroit public schools suspended in-person learning, while New York City, with the country's largest schools system, neared a trigger-point measure that would shut down its 1,800 school buildings.

The governors of six states in the northeast, the region hit hardest in the early months of the pandemic, were set to hold an emergency meeting this weekend to coordinate responses, New York Democrat Andrew Cuomo told Reuters.

With Thanksgiving and other holidays on the horizon, several governors, including those in California, Oregon and Washington, urged residents to avoid venturing out of state.

Gathering with family and friends, some governors warned, can transmit the virus through what Cuomo called "living room spread."

Several governors urged residents to stay home as much as possible, including Nevada Democrat Steve Sisolak, who said late on Friday that he became the fourth governor to become infected with the virus.

"This weekend, please stay home," Sisolak posted on Twitter on Saturday. "If you have to leave, wear a mask and try to limit your duration. This is serious, Nevada."

On Friday, the governors of Oregon and New Mexico ordered near-lockdowns in the most aggressive response yet to the latest wave of coronavirus infections shattering records across the U.S., even as many of their counterparts in other states show little appetite for reimposing the hard-line restrictions of last spring.

"We are in a life-or-death situation, and if we don't act right now, we cannot preserve the lives, we can’t keep saving lives, and we will absolutely crush our current healthcare system and infrastructure," Democratic Governor Michelle Lujan Grisham of New Mexico said in imposing a two-week stay-at-home order.

Oregon Governor Kate Brown ordered a two-week "freeze" starting Wednesday, under which all businesses will be required to close their offices to the public and mandate work-from-home "to the greatest extent possible."

While most Oregon stores will remain open, gyms, museums, pools, movie theaters and zoos will be forced to close, and restaurants and bars will be limited to takeout. Social gatherings will be restricted to six people.

The Democratic governor warned that violators could face fines or arrest.

"For the last eight months, I have been asking Oregonians to follow to the letter and the spirit of the law, and we have not chosen to engage law enforcement," Brown said. "At this point in time, unfortunately, we have no other option."

Both Oregon and New Mexico had lockdowns earlier in the year, but the coronavirus is coming back with a vengeance across the country.