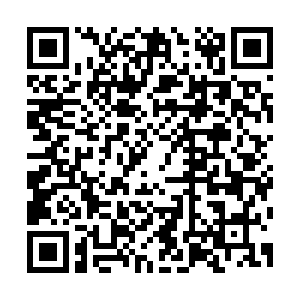 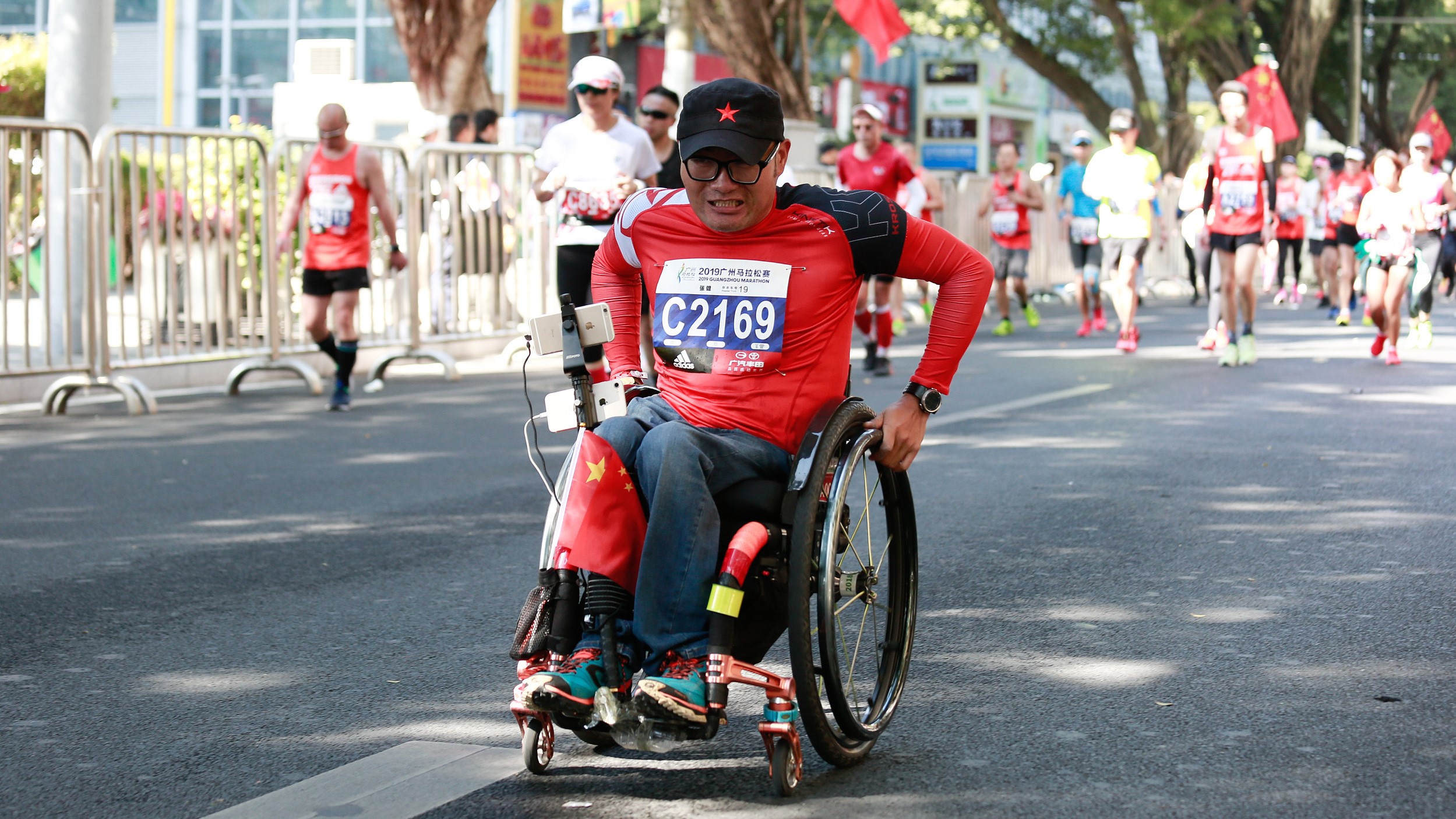 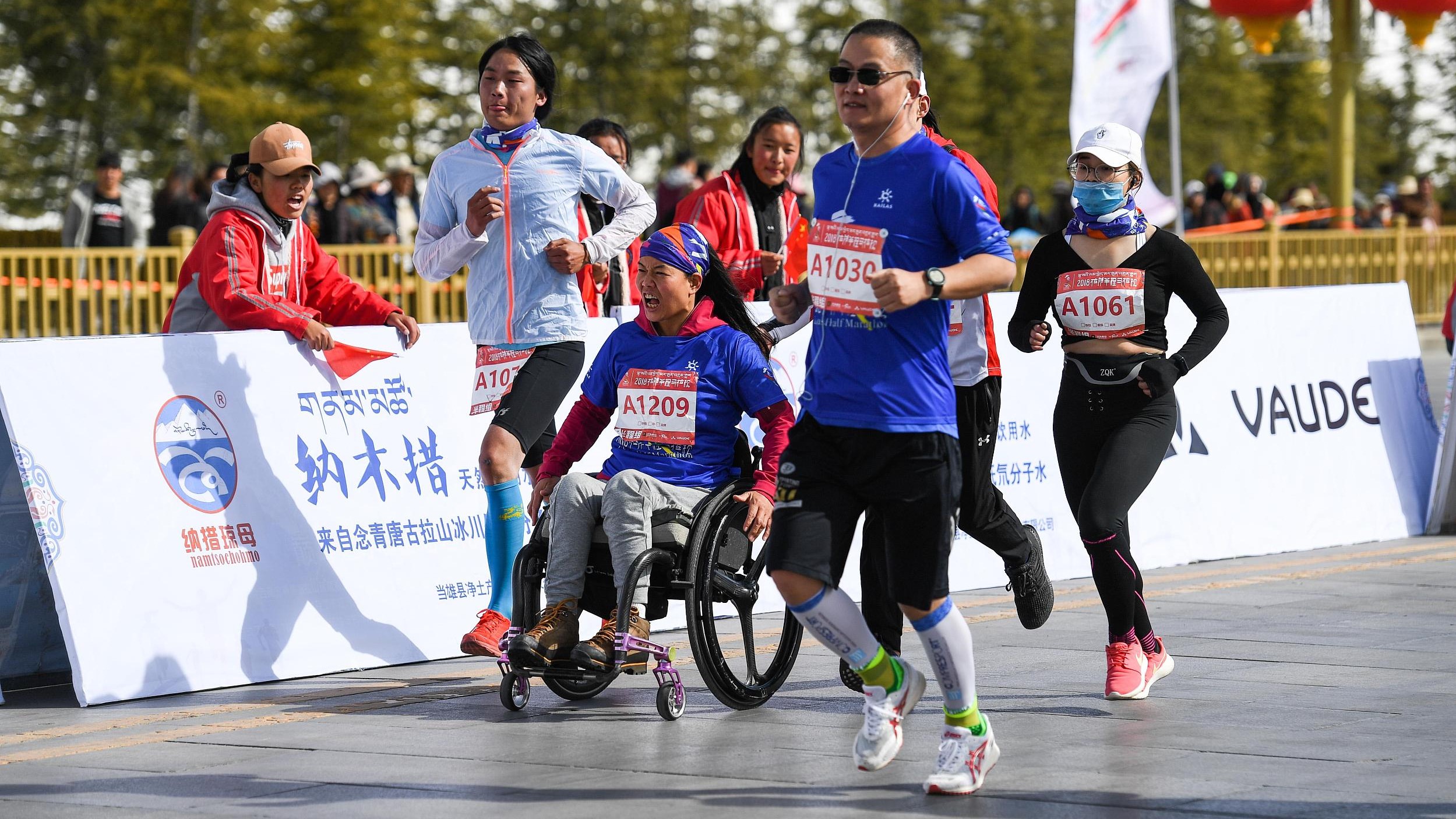 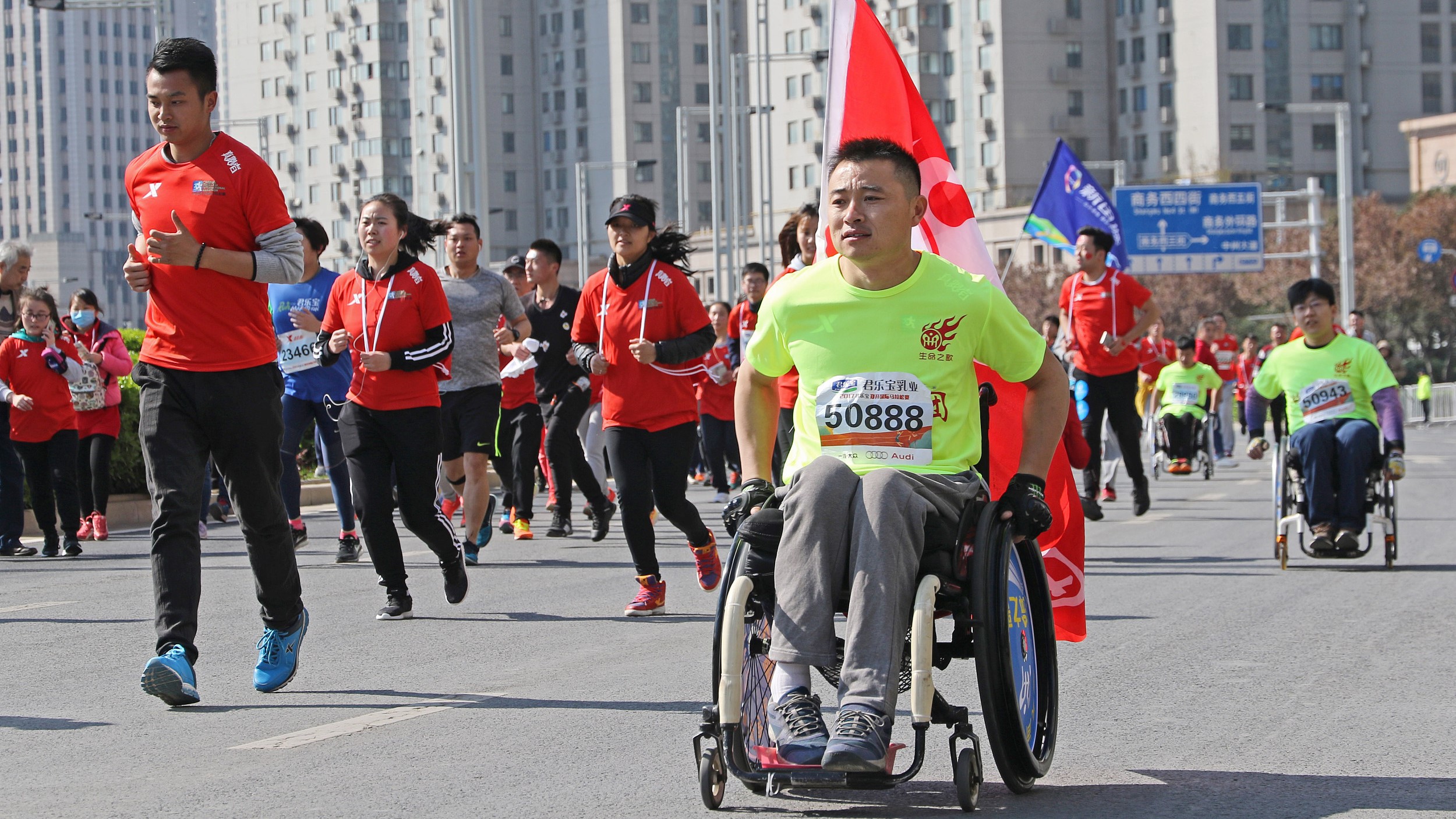 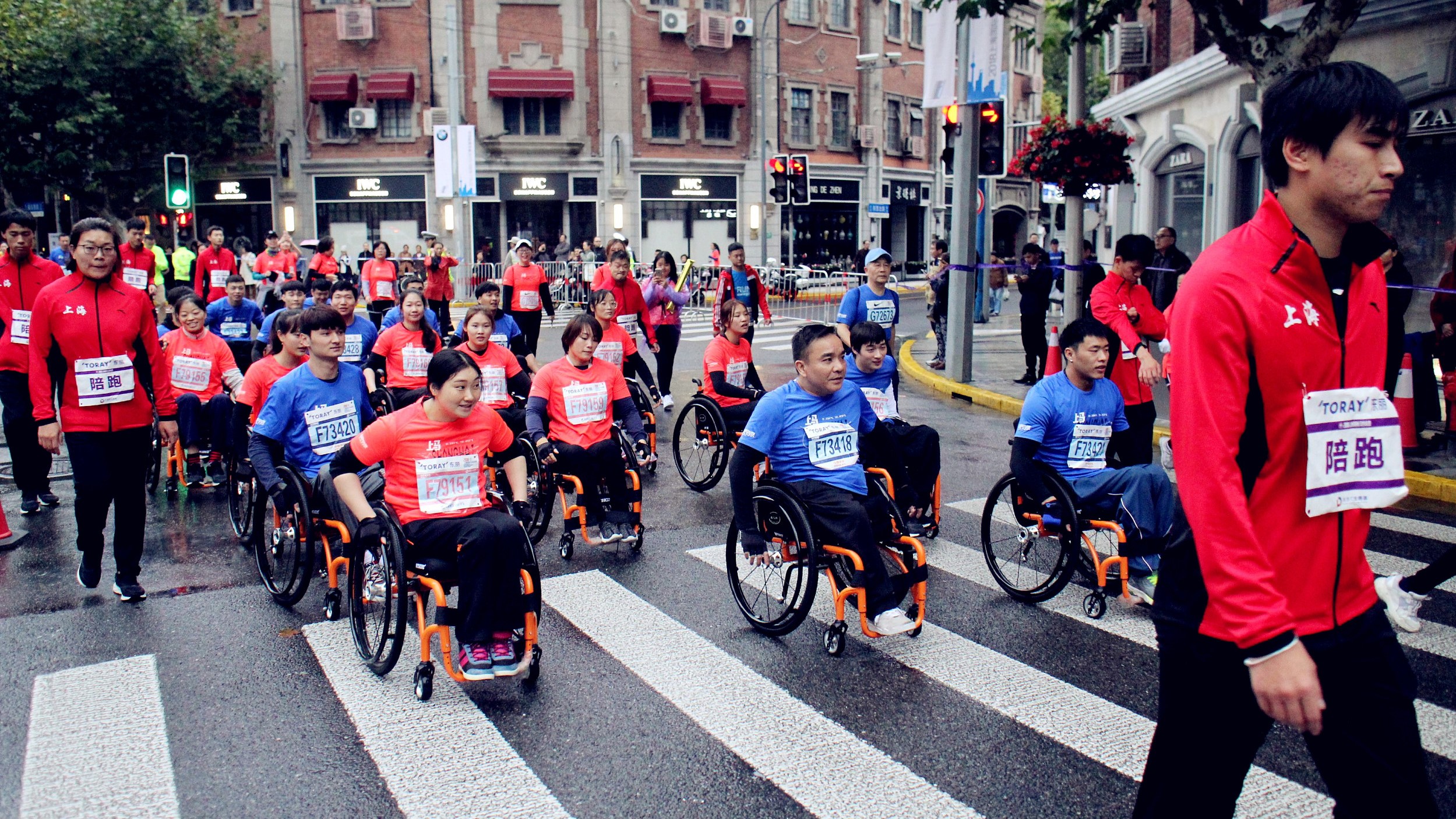 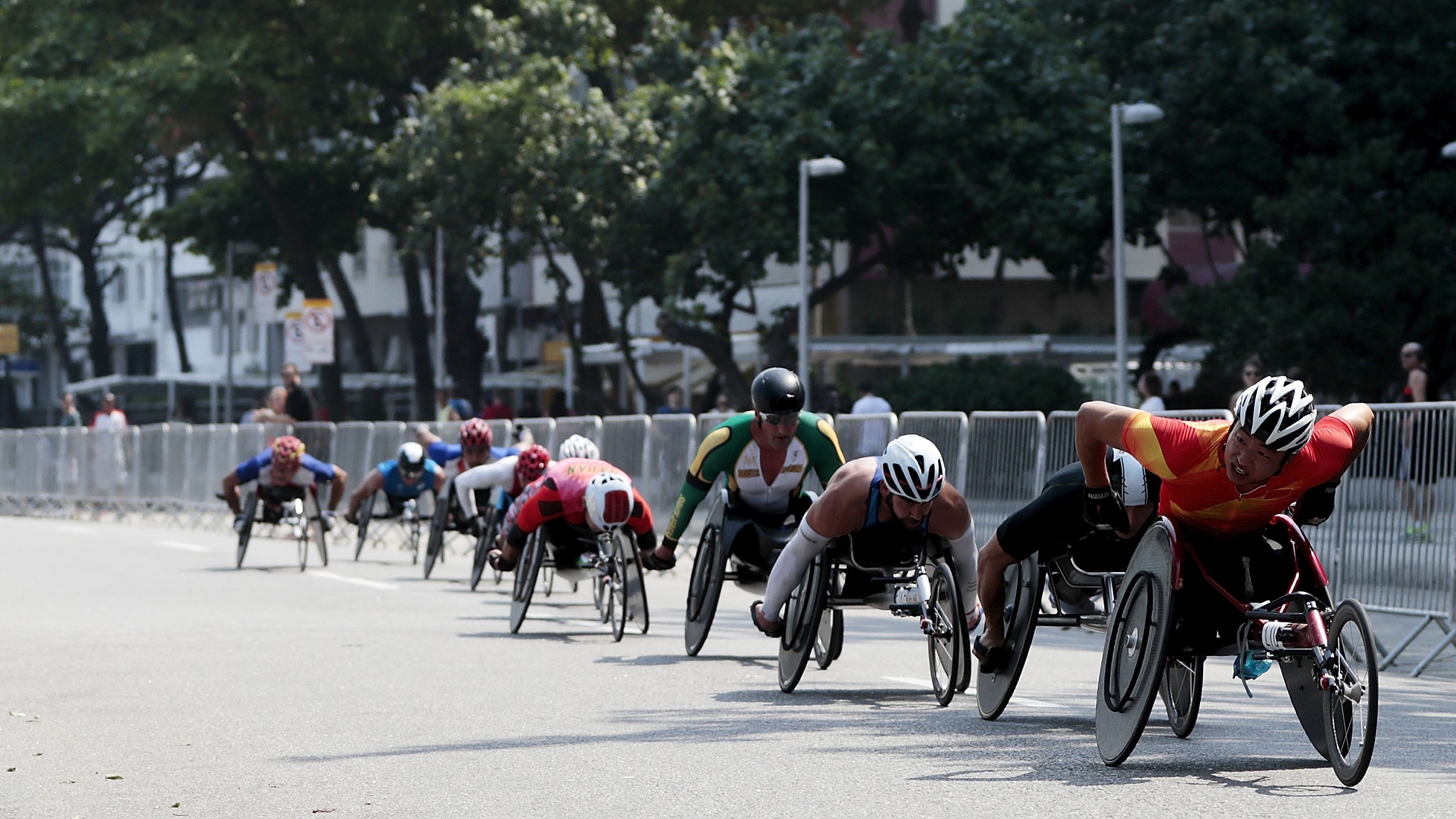 Wu Fan, Sheng Wending, Peng Lin and Liu Han finished the 8.5-kilometer Changsha Marathon in Changsha, central China's Hunan Province on Sunday. Unlike other participants, the four did it in wheelchairs.

All four could not walk because of spinal cord injuries but that did not stop them from enjoying the fun of sports. Instead of running, they were wheeling themselves in the competition.

Thirty-seven-year-old Wu is the four-head group's captain. He served in the army and began to attend marathon events from 2018. "I have attended 21-kilometer half-marathons and 42-kilometer full-marathons before. Yesterday's event was only eight kilometers so I did not feel very tired finishing it," said Wu to Sohu on Monday.

There were two slopes on the course. Though they could not cause any trouble for Wu, he still needed to slow down a bit. Right before the first slope, another runner came to help Wu and pushed him over the slope in spite of Wu's continuous rejections.

"I told him I could do it by myself. Maybe it will be slower but ranking does not matter to me, we are doing this for exercising," said Wu. He recalled seeing "No help, please" on the backs of other racers' wheelchairs in marathon events.

Wu was the first of the four to reach finish the course and it took him 43:09 to do it.

Thirty-one-year-old Liu is the youngest of the four and it was his marathon debut on Sunday. "Wu Fan kept encouraging me to do this. He told me that once you try it, it will grow on you," said Liu.

When Liu finished the 8.5 kilometers, he realized that Wu was not exaggerating at all because he felt he already fell in love with marathon "I thought people might cheer me but I did not expect so many of them. When you felt so exhausted, a simple 'Fight' will give you new energy." He called someone came to him to shoot and encourage him. "He told me 'You're the best.' I just wanted to keep moving forward after hearing that."

Like Wu, Sheng has raced in multiple marathons. It has been 13 years since he sat on wheelchair. Sheng admitted he was very depressed at the beginning but attending marathon changed everything.

It took Sheng 48:59 to finish on Sunday and he said it's definitely not the best he could do. He finished 21-kilometer half-marathon at 2:02:00 the first time he tried it. "I never thought I could do it," said Sheng.

Arm strength is very important for wheelchair racers and that's why Sheng invested a lot of time and efforts in stamina training. "Marathon is a strenuous sport. It takes long-time training to build yourself ready for it. Exercising can help your muscles relax as well so you won't get hurt easily," said Sheng.

Sheng told Beijing Youth Daily that one cannot stop before finishing a marathon because once you stop, it's basically impossible to resume. Sheng said when he felt tired, he would first slow down and adjust his breathing before he continued.