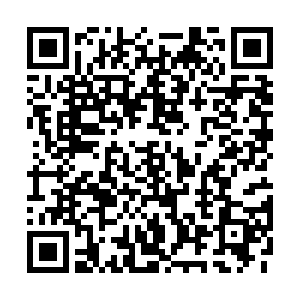 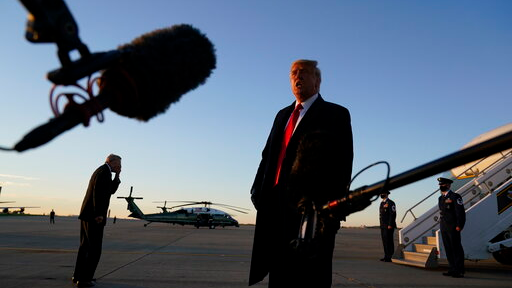 America's political right, at least in terms of its leadership and institutional organization, is extremely sophisticated. An important part of this rock solid structure is the fact that the right-wing media landscape has been dominated by a single TV giant, Fox News, which has always functioned as a propaganda arm of the Republican Party. But after U.S. President Donald Trump's defeat in the 2020 presidential election, the president and his supporters are shaping up to fracture Fox's dominance over right-wing television.

A formal competition against Fox News has been apparently in the works for some time. It's widely believed that Trump's 2016 presidential bid was less a serious campaign, at least at the beginning, and more an opportunity to brand a new media outlet. Allies of the president have also apparently been trying to find a viable way to make this happen for the past two years to create a safe space for the president's realm of "alternative facts."

The Wall Street Journal recently reported that Hicks Equity Partners, a private equity firm with ties to a co-chair of the Republican National Committee, has held talks about acquiring and investing in the pro-Trump TV station, Newsmax.

However, Newsmax CEO Christopher Ruddy told Variety that his outlet would "never become 'Trump TV,'” but said that he would be open to letting Trump have his own show after leaving office.

"We listen to them (possible investors), but our main focus is continuing: We would like to overtake Fox News in the next 12 months, and I think it's do-able," Ruddy added.

The reason for this confidence is the fact that Newsmax's ratings have skyrocketed in recent weeks, owing to the fact that regular Fox News viewers feel betrayed by the decision desk's move to (rightly) call the presidential election for former vice president Joe Biden and their decision to make an early call on Arizona for Biden.

While Fox has a history of dabbling in, if not spreading, bizarre and dangerous conspiracy theories on behalf of the president (and some Fox hosts are definitely doing just that with the bogus election fraud conspiracy), they still need to have a sliver of credibility to retain some level of respect among their peers and maintain access to the government. If they were to lose this, their business would suffer. 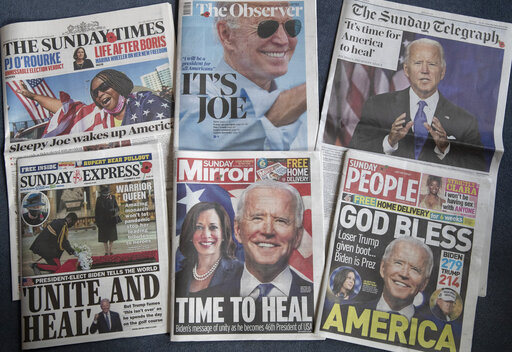 A selection of British national newspapers on November 8, 2020. /AP

A selection of British national newspapers on November 8, 2020. /AP

Nonetheless, Trump pointed out that Fox News' break in lockstep was a key difference in the 2016 versus 2020. "The biggest difference between the 2016 Election, and 2020, was @FoxNews!" he tweeted. Obviously the real difference was that he won in 2016 and in 2020 he lost, but of course it was all rigged, according to Trump and his supporters. It's a clear show of what the president wants in the right-wing media and how he would run his own outlet – purely self-serving.

Outlets like Newsmax don't have to bother with externalities like credibility. In fact, their entire appeal is the fact that they regurgitate disinformation from the president with no scrutiny and fulfill the growing demand for an unadulterated right-wing fantasy world where facts don't matter. They are, unequivocally, Trump propaganda. They don't need a pretense of credibility and that's playing to their advantage.

As CNN's Brian Stelter said: "Fox News has never seen competition like this in its history." CNN media analysts pointed out that during the summer, Newsmax was seeing around 25,000 viewers at any given time. In the final week of October, just before the election, the average number of viewers climbed to 65,000 at any minute.

Then came the election. During election week, Newsmax averaged 182,000 viewers and the number has grown by the hundreds of thousands daily, with some evening shows that struggled to break 100,000 viewers crossing or nearing the one million mark after the election. The reason, as CNN's analysts point out, is the fact that they are maintaining control of that desperate supply of misinformation that Trump's supporters need.

The president's Twitter feed has been extremely influential in shaping the right-wing media universe. While Fox News officially recognizes the results of the election and has stood by its calls, some hosts on the network are advancing conspiracies on the issue – and Trump promotes these shows on Twitter, leading to noticeable upticks in viewership and ratings. In addition to Newsmax, he has repeatedly shared clips from and promoted another far-right television network, One America News Network (OANN), which has helped the station gain relevance.

Even in the social media sphere, where Trump and his supporters are being held accountable for their false and dangerous claims, a new company, Parler, is tapping into the growing demand for a space where falsehoods and bigotry can roam free with few consequences. While it's unlikely the app can compete with Twitter or Facebook, it is providing a sizable echo chamber for misinformation.

For Trump, taking on the well-established right-wing media infrastructure will be no easy feat, but he has a clear individual incentive – staying relevant, feeding his insatiable ego and playing down the mountain of debt he owes. This may well be the only way he can maintain a career as a former president.

On the other hand, the existing conservative media infrastructure, the Republican Party and the general conservative movement in America have an ironclad ideological conformity that has made them the most effective political force in the country for decades. If Trump breaks away and takes his supporters with him, this could actually make the Republican Party's job in Washington much harder by fracturing the party and its base.