Amid the pandemic, a juggling act for China's export hub Yiwu
Yu Jing 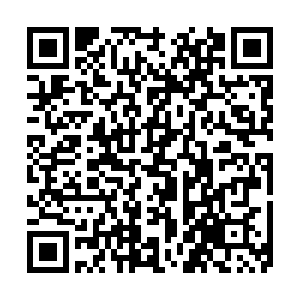 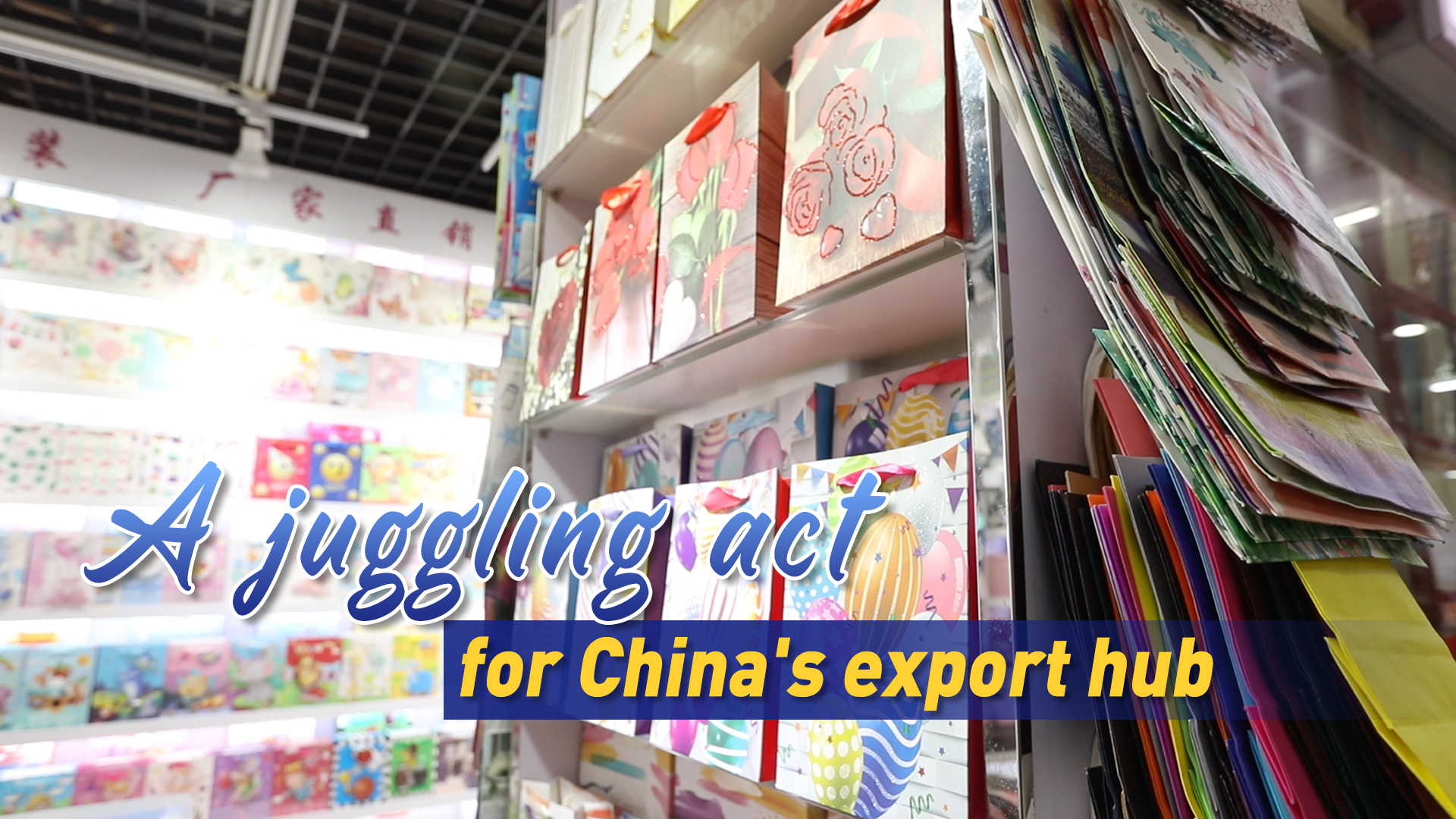 As Christmas approaches, Yiwu in east China, known as the world's capital of small commodities, is normally packed with foreign traders from every part of the world, ready to make bulk orders of mass market goods, ranging from gift bags to notebooks.

But this year, as the COVOD-19 pandemic slammed overseas demand and international travel, it's way more difficult to spot foreign visitors in the city. The hustle and bustle of Yiwu International Trade Market, a gigantic market which covers an area of six million square meters and hosts more than 70,000 stalls, can no longer be seen. Owners stand idle in front of their stores, while some sit against the backdrop of store shelves, with their eyes on their smart phones most of the time.

The pandemic has wreaked havoc on Yiwu's international trade business. According to data from Yiwu Customs, the total value of import and export from Yiwu declined by 13.3 percent in the first quarter of this year, compared with last year. As the pandemic came under control domestically, export gradually climbed, but was again hit hard when the virus spread wide in other countries.

"All of our business comes from old customers," said a gift bag supplier in Yiwu International Trade Market. Sales shrank by more than half this year, and because customers cannot come physically to handpick the products, almost all orders were placed via online channels, she added. 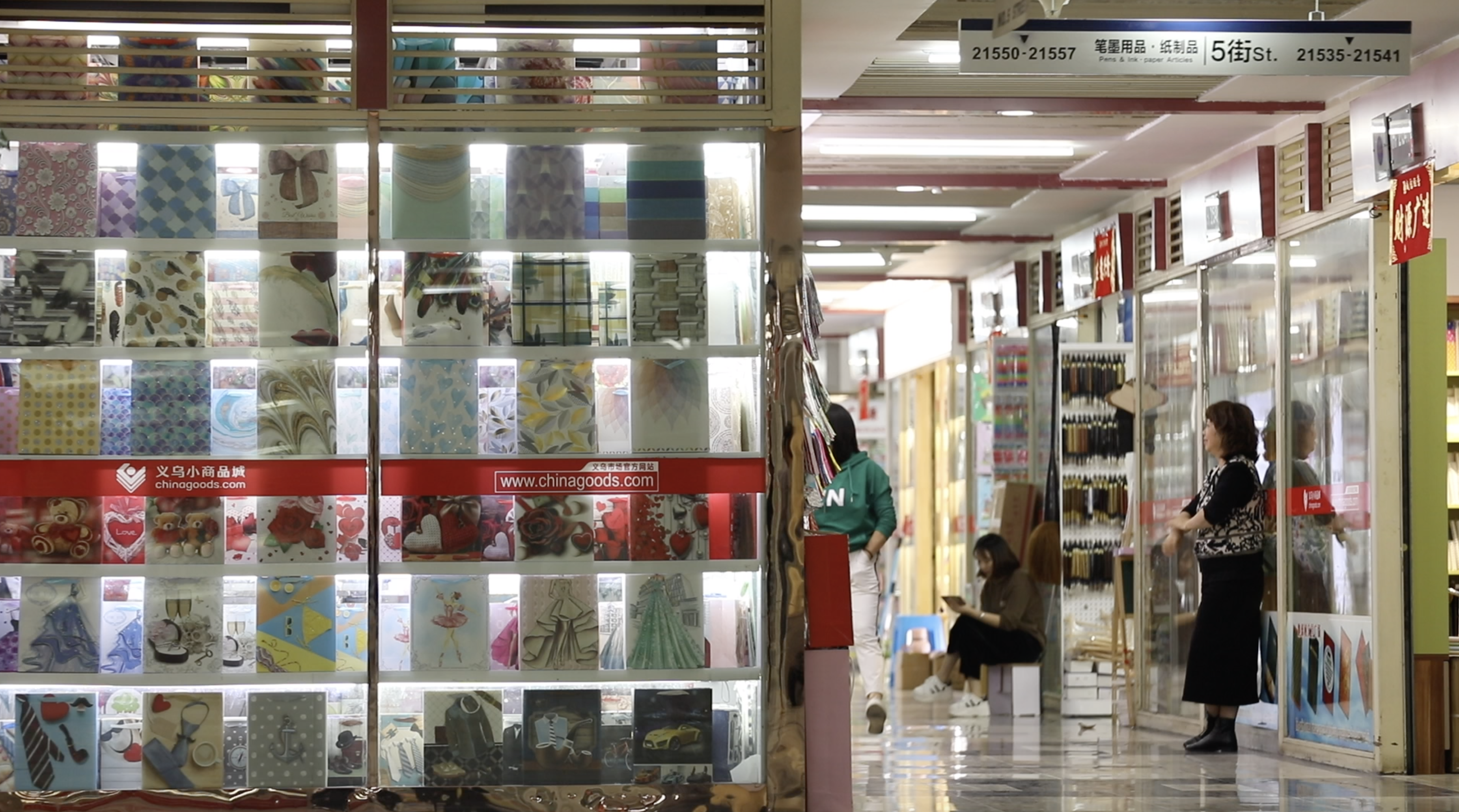 For many businessmen in Yiwu, relying on repeat orders is barely enough, especially for those with sizable production capacity that have to keep their workers employed. "We have to keep the production going so that once factory orders rebound, we are ready to expand production immediately," said Liu Ye, general manager at Wengu Stationery, one of the largest export-driven stationery manufacturers in Yiwu.

The company specializes in producing customized notebooks, gift bags and other school and office supplies, and count on U.S. and Europe as its major consumer markets. Its efforts to turn to the domestic market preceded the pandemic, but the spread of the virus let it double down its efforts. This year, many of its foreign clients failed to open their business and some did not even restart their business until September this year, when the fall school semester began, according to Liu.

But shifting to the domestic market is not easy. Many of the best-seller products for foreign markets are not favored by Chinese consumers. One of the best-selling file folders in the U.S. market shunned upon by Chinese consumers who have a preference for simple design and less bold colors. This means factories have to reassess consumer demands and adjust their production plan accordingly.

For many export-oriented businesses, how to put their products in the domestic market is another hurdle between them and the wallets of Chinese consumers. Most of them are primarily manufacturers and they are not familiar with how marketing works. Some lack local distribution channels while others have never tried selling their products through e-commerce platforms. 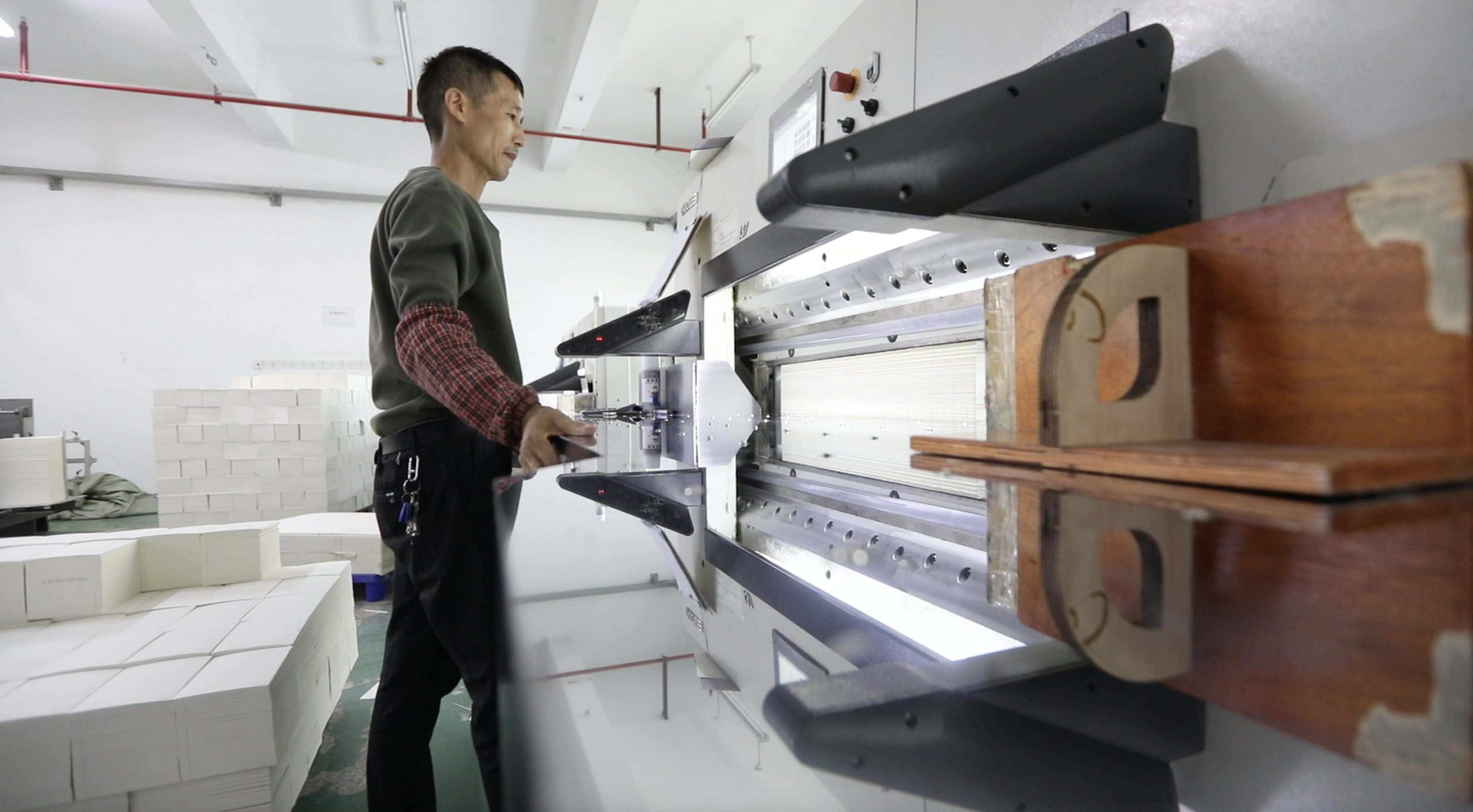 A workers is producing customized notebooks in the factory of Wengu Stationery, in Yiwu, east China's Zhejaing Province. Shen Langlang/CGTN

A workers is producing customized notebooks in the factory of Wengu Stationery, in Yiwu, east China's Zhejaing Province. Shen Langlang/CGTN

But the pandemic has made moving business online more important than ever. With shelter-at-home orders, most consumers and suppliers rely on e-commerce platforms to complete their purchase. According to data from the National Bureau of Statistics, online retail sales in China increased by 7.3 percent year on year in the first half of 2020, among which the online retail sales of physical goods experienced an increase of 14.3 percent.

But to tap into that increase in demand from online purchase, exporters need to understand how e-commerce works in China.

"One needs to have large sales to be visible on e-commerce platforms, or else consumers cannot find your e-commerce store when searching online for the product," said a notebook manufacturer in Yiwu International Trade Market who tried to sell his products online via Alibaba. He had tried to buy paid traffic and hired two people to help him with e-commerce, "but because we were not familiar with the rule of the game, the money we spent on promotion even outnumbered our revenue in sales."

Navigating the e-commerce platforms is a process of trial and error, said Zheng Tianci, director of e-commerce at Wengu stationery. Initially, there were no more than a few hundred orders per day from e-commerce platforms for the company. But after it adjusted its e-commerce strategy, focusing on establishing brand recognition rather than solely on boosting sales, orders started to kick in. 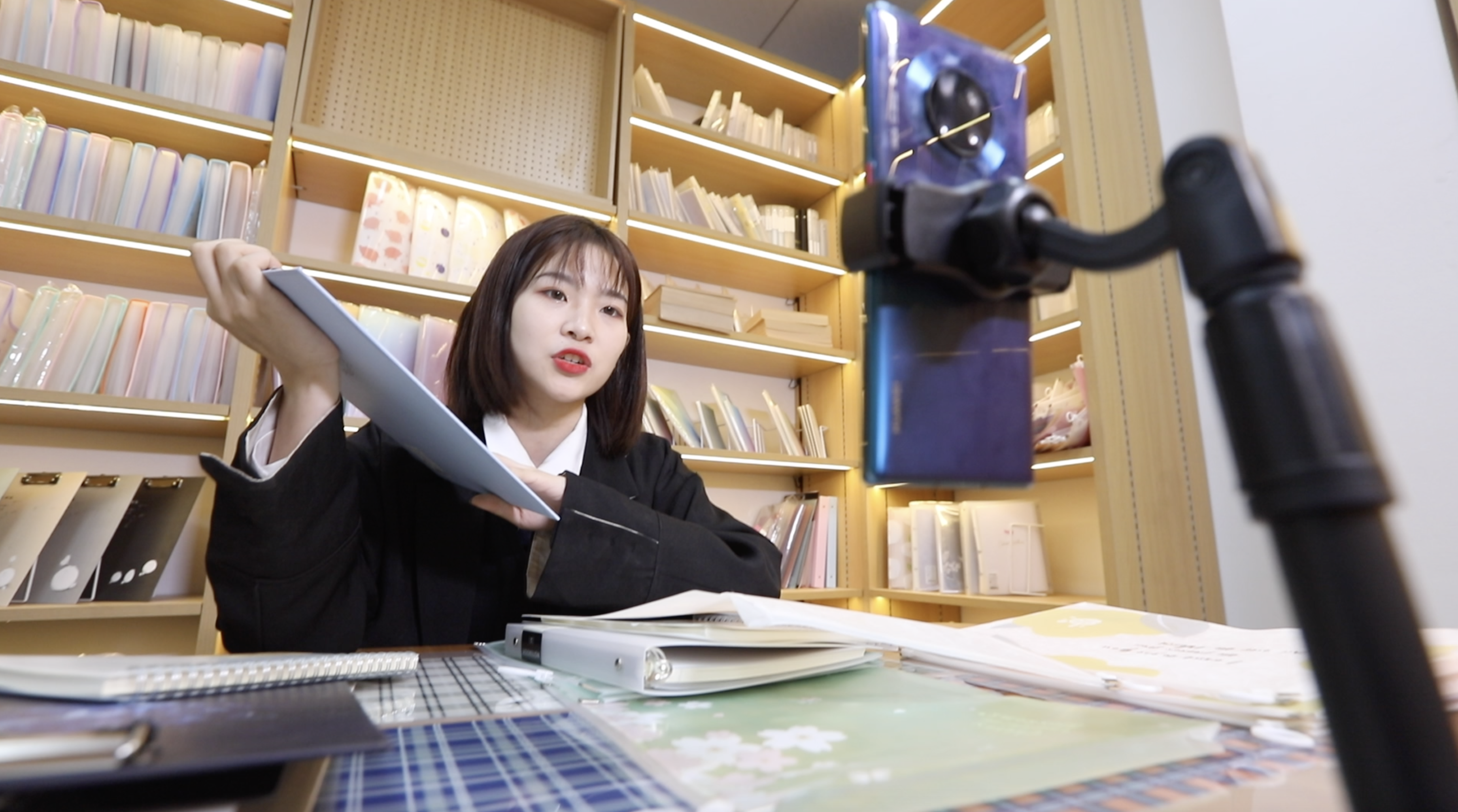 But for many small business owners in Yiwu, that brand awareness is an entirely new concept. Items produced by manufacturers in Yiwu are inexpensive, non-technical, and are oftentimes indistinguishable from one another. Trying to compete against big market players in selling those generic goods online is almost impossible, considering the big online presence that those big-name players have.

This is why many small business owners have now turned to livestreaming, which instantly connects viewers and the brand, to boost sales domestically. In the first half of 2020, more than 10 million e-commerce live-streaming sessions were hosted online in China, which means at least 5,000 livestreaming sessions per day, according to data from the Ministry of Commerce. With most brick-and-mortar stores closed amid the pandemic, livestreaming, which allows consumers to see products and flash deals in real time, was made the core of the e-commerce experience.

But just like running e-commerce stores, livestreaming on e-commerce platforms faces the same hurdle of bumping up against big market players. While top livestreaming hosts like Li Jiaqi attracts millions of people to tune in for one single livestreaming session, most small-scale retailers in Yiwu get no more than a hundred views when livestreaming their products. 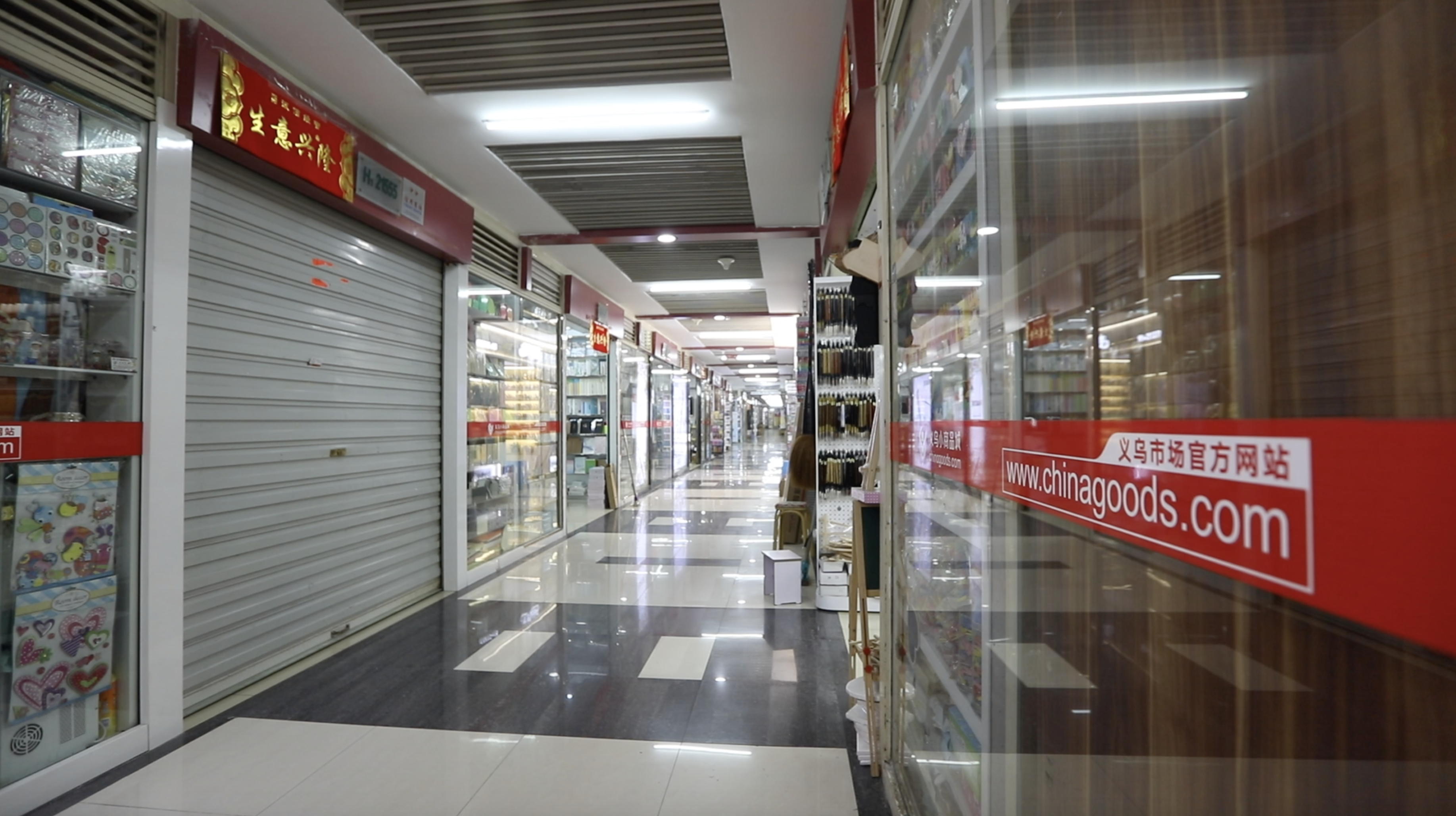 "You need an entire team behind the scene, responsible for picking up the products, for drafting the livestreaming scripts and for delivering the products to customers etc.," said Zheng from Wengu Stationery.

But not all products are suitable for marketing through livestreaming. Stationery like notebooks, in comparison to lipsticks, are far less attractive when it comes to being displayed on camera. In Yiwu, the ability to design and orchestrate livestreaming is still a rare talent; hard to secure despite years of offline retail experience.

The Yiwu local government, in a plan published in June this year, promised to offer benefits in taxation, housing and education for top livestreamers. It also vowed to make total livestreaming e-commerce sales exceed 100 billion yuan by 2022.

At the Yiwu International Trade Market, a few shop owners can be spotted talking to their phones livestreaming. In the quiet market, the excitement was palpable miles away from their stores.