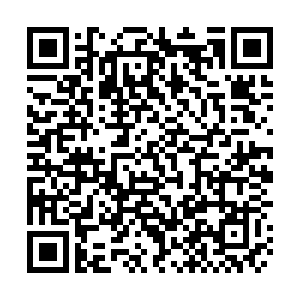 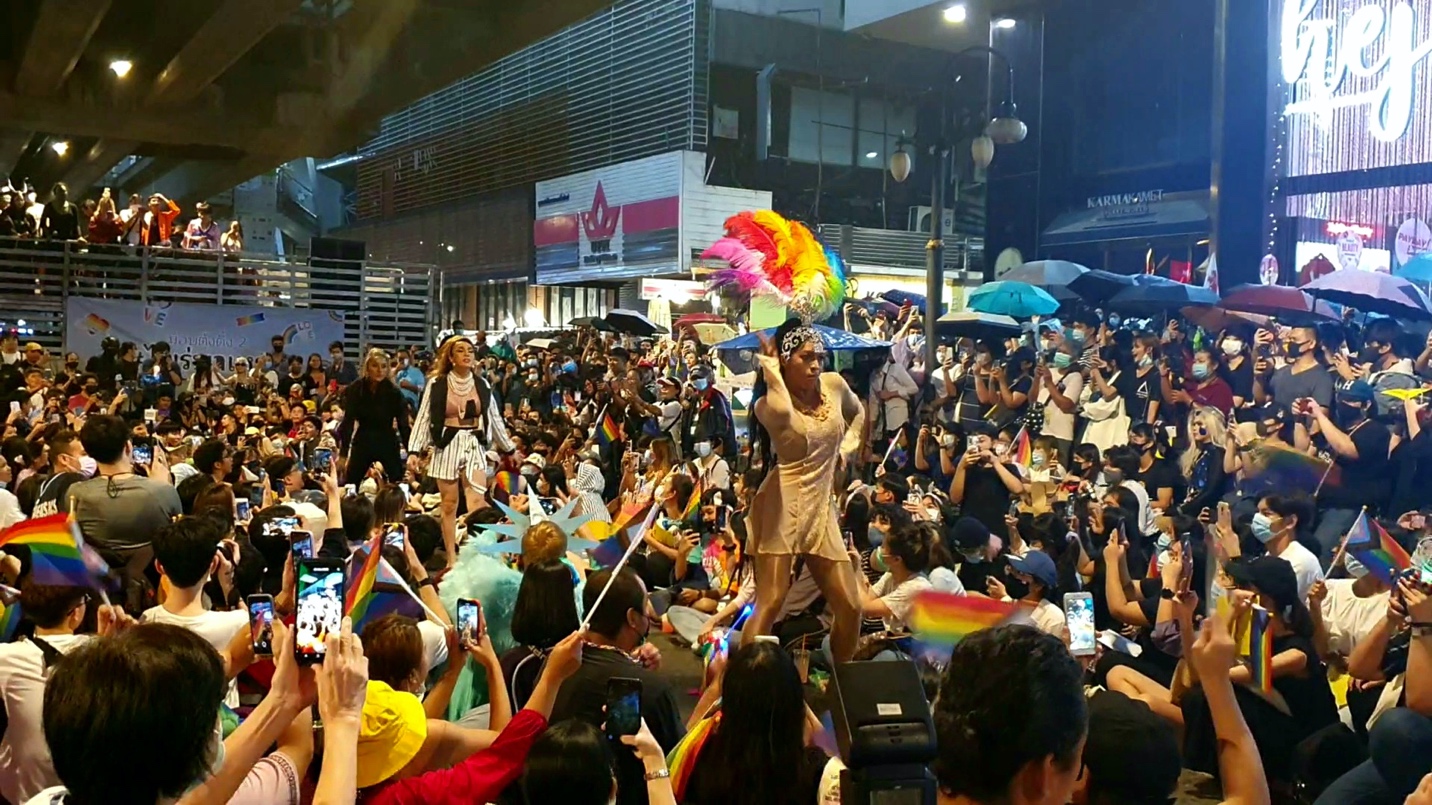 There's something uniquely Thai about attempting to bring down a government with concerts, performances and fashion shows. Despite the real threat of indiscriminate violence, the past few months of relentless street protests proceeded with a carnival, festive atmosphere. Occupying major intersections and blockading government ministries, protesters succeeded in grinding the capital to a halt.

"Monarchy" has undoubtedly become the word of the year as protesters aired their grievances in colorful and exuberant fashion. Shielded by one of the world's strictest anti-defamation laws, the Thai monarchy has in a matter of months gone from an untouchable institution, whispered about behind closed doors, to the subject of open criticism.

The institution of the Thai monarchy, which is roughly 800 years old, is now being challenged by 21st century people in their very own Millennial ways and their demands are much more serious than their symbols of pop culture might suggest – resignation of Prime Minister Prayuth Chan-ocha, rewrite the constitution and reform the monarchy.

From the very beginning, the largely student protesters used other pop-cultural elements. The three-finger salute from the Hollywood blockbuster "Hunger Games," which portrayed an uprising against a dictatorial regime, became a symbol of resistance for protesters. They dressed up as Harry Potter, held fun-runs with stuffed Hamtaro hamster toys and fans of K-Pop groups did fundraising for the protest on social media platforms tapping into a strong digital network and "weaponizing" social media and messaging platforms. 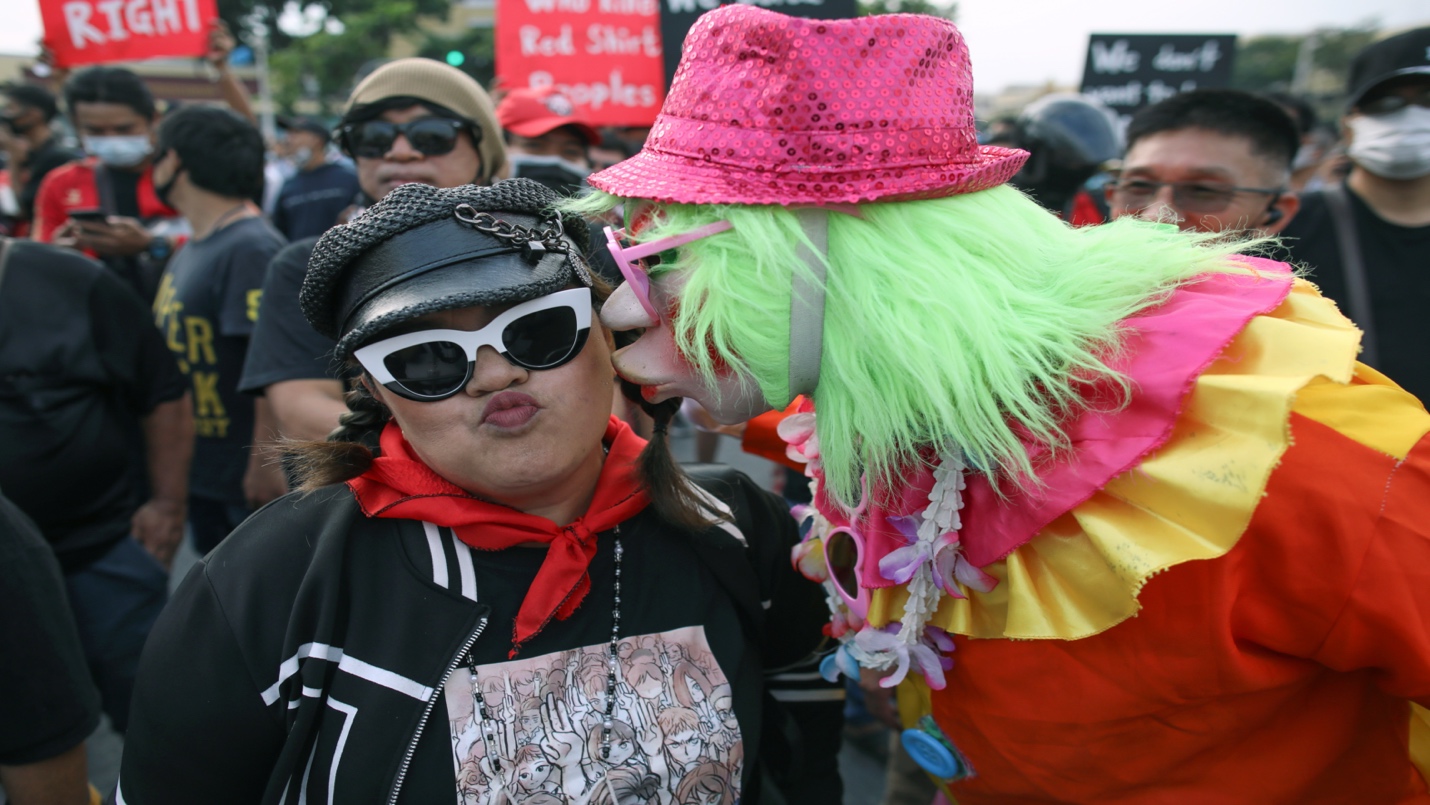 Protesters get creative by dressing up in costumes as an outlet for their frustrations with the government in Bangkok, Thailand. /Reuters

Protesters get creative by dressing up in costumes as an outlet for their frustrations with the government in Bangkok, Thailand. /Reuters

The advancement of recent protests is greater than previous ones in Thai society as it has stepped beyond the borderline between the digital and physical world. Hashtags of new protest ideas spread as people were still looking for unique ways of protesting. Creativity, culture, and trendiness have become tools for this era of political demonstrations blurring the boundary between the digital and physical space.

"It has become a movement that represents our generation," Kitt Mareengam, a student protester said. "We don't need the old-style of protests where leaders just get on a stage and talk aggressively. That's boring. We have our own way and it is more colorful and festive."

Playful protests featuring street art, performances and other creative activities have become a popular cultural attraction in Bangkok pulling in thousands to tens of thousands of mostly young demonstrators. In true festival style, stalls sold T-shirts, hats and other souvenirs, while hundreds of food carts served up drinks, noodles, sweets and snacks. 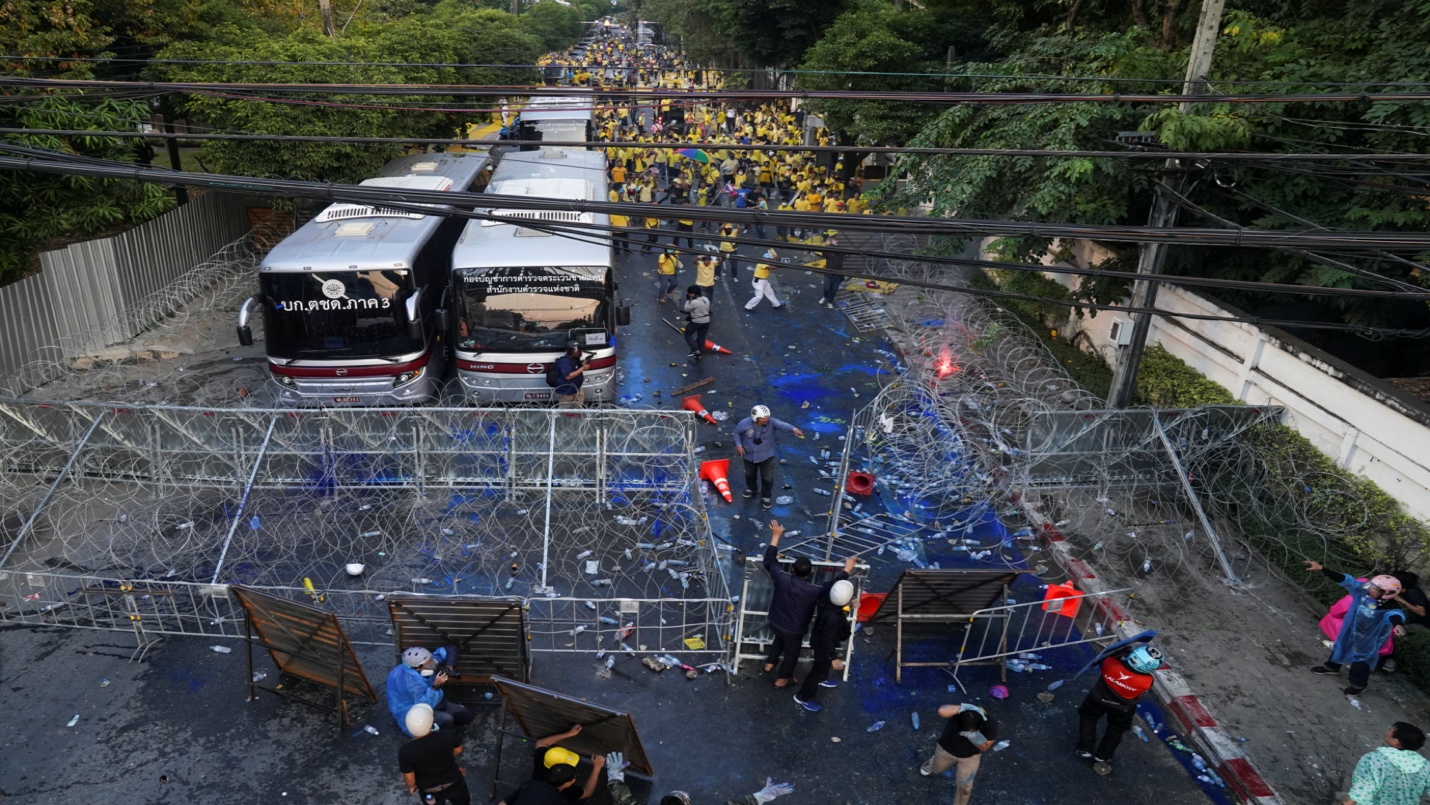 The police fire water cannon and teargas at protesters who cut through razor-wire barricades and removed concrete barriers outside the parliament in Bangkok, Thailand, November 17, 2020. /Reuters

The police fire water cannon and teargas at protesters who cut through razor-wire barricades and removed concrete barriers outside the parliament in Bangkok, Thailand, November 17, 2020. /Reuters

For food sellers, the protest movement is a welcome business opportunity. Vendors follow the social media announcement from the protesters' accounts diligently and then race to the scene as soon as a new protest venue is announced.

Nitha Chana pushes his cart of grilled squid skewers through crowds of protesters at almost all the protest site since July.

As his squid skewers smoke from the charcoal grill, Nitha Chana said he is aware of the risks of doing business in such a volatile environment. But the economic downturn in the face of the COVID-19 pandemic has left him with limited options.

The light and festive atmosphere of Thailand's latest episode of political unrest has been sporadically met with violent clashes. The protest near the parliament house on November 17 was the most violent since the student-led movement emerged in July. Bangkok's Erawan Medical Center said at least 55 people were hurt: at least 32 were suffering from teargas and six people had gunshot wounds.

Thailand's troubled democratic history has been marred by a seemingly "unbreakable" cycle: military coup, interim government, elections, repeat. So while the people on the streets dream of a better, more democratic Thailand, their creative strategies as a means to bring about that dream has, so far, done little to shake the establishment and the country's most powerful institutions.