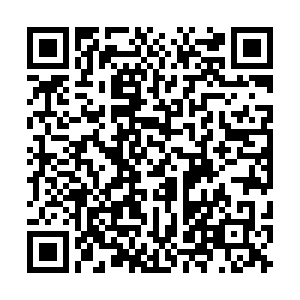 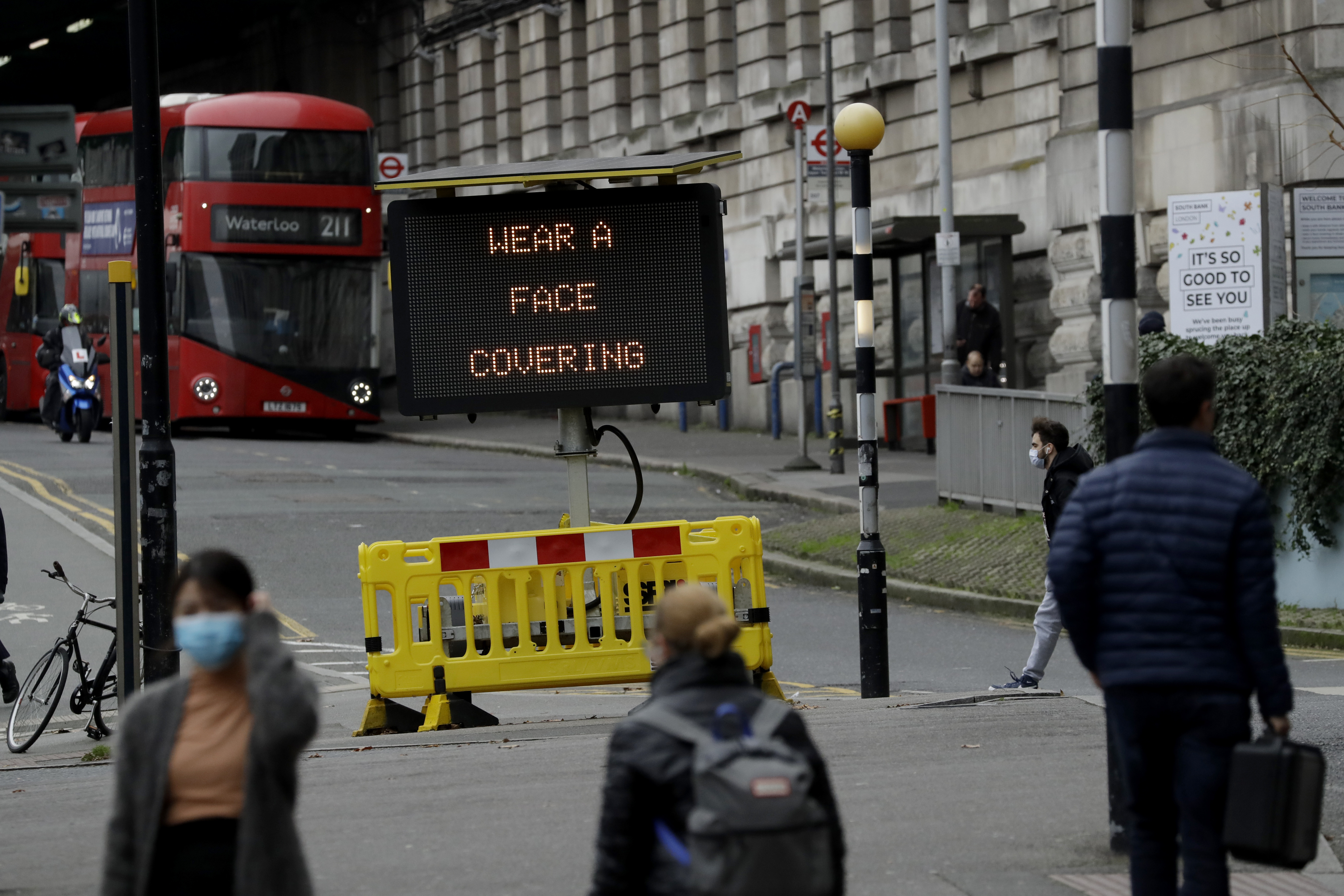 A sign is displayed outside Waterloo train station to remind people they are required to wear face coverings inside the station during England's second coronavirus lockdown, in London, November 20, 2020. /AP

A sign is displayed outside Waterloo train station to remind people they are required to wear face coverings inside the station during England's second coronavirus lockdown, in London, November 20, 2020. /AP

England will end a national COVID-19 lockdown on December 2 and move into tougher tiered regional restrictions than before, with more areas facing severe constraints to prevent the virus from reigniting, Prime Minister Boris Johnson's office said.

Johnson ordered England into a month-long lockdown in early November after infection cases and deaths started to rise again, angering businesses and some of his own political party over the economic consequences.

A second wave of infections has started to flatten, official data shows, but scientific advisers are expected to warn on Monday that previous regional restrictions did not go far enough and harder measures are needed to prevent another national lockdown.

Johnson's office said the prime minister would set out a new COVID Winter Plan on Monday, with more areas placed into the higher restrictions under the tiered system, which will include details on Christmas interactions.

He will discuss the plan with his cabinet on Sunday and present to parliament on Monday.

"The prime minister and his scientific advisors are clear the virus is still present – and without regional restrictions it could quickly run out of control again before vaccines and mass testing have had an effect," a spokeswoman said.

"That would put in jeopardy the progress the country has made, and once again risk intolerable pressure on the National Health Service (NHS)."

On Saturday, the UK Treasury said Finance Minister Rishi Sunak is expected to announce one-year package worth more than three billion pounds (about 3.98 billion U.S. dollars) to support NHS in tackling the impact of the novel coronavirus pandemic. 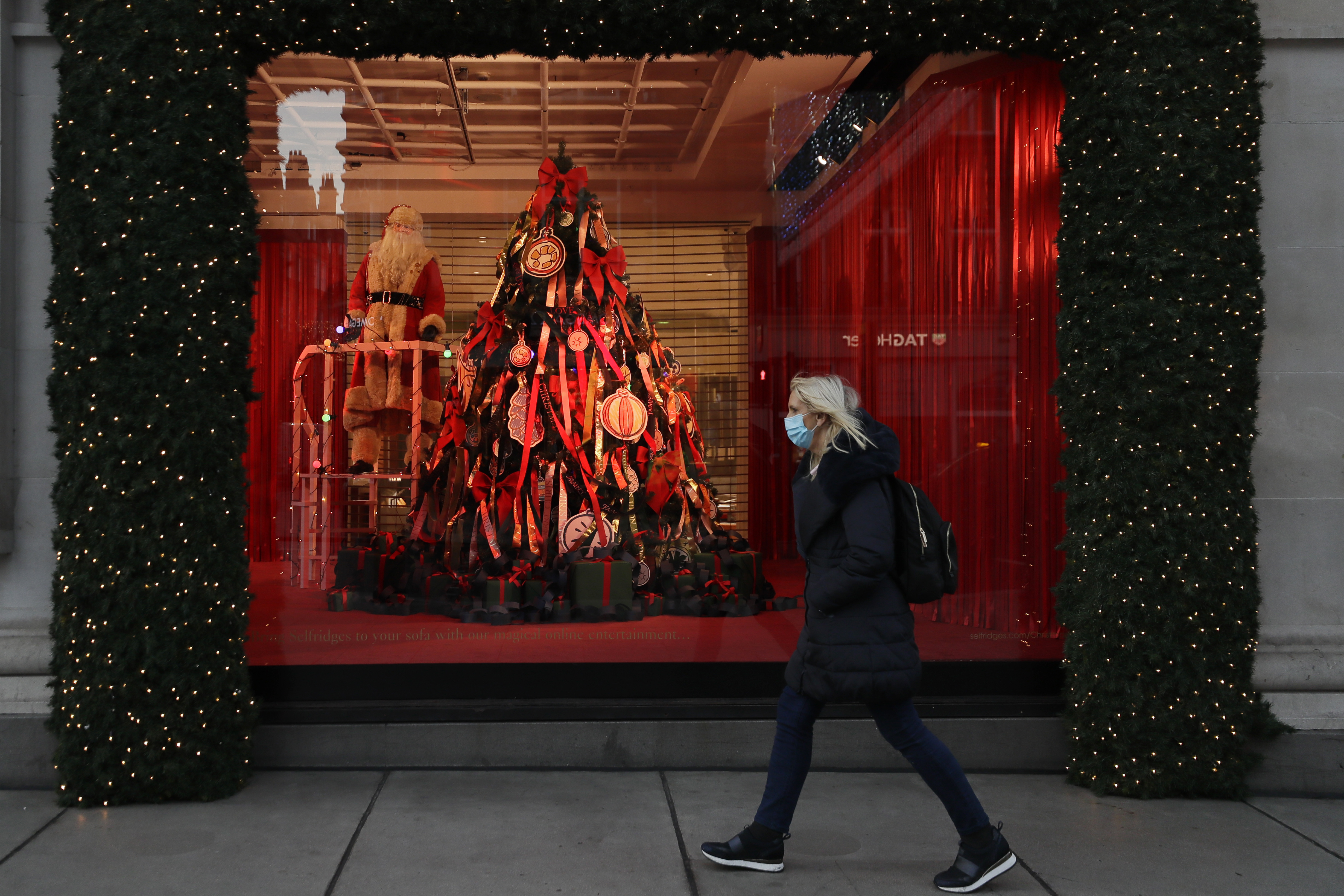 A woman walks past Christmas decorations in a shop window on Oxford Street during a second lockdown in London, November 19, 2020. /AP

A woman walks past Christmas decorations in a shop window on Oxford Street during a second lockdown in London, November 19, 2020. /AP

Britain has suffered the worst death toll in Europe and the deepest economic contraction of any G7 nation, prompting sharp criticism of Johnson's handling of the pandemic.

Prior to the latest lockdown, England had been placed into three tiers, with the toughest measures imposed in northern England, where movement was limited and pubs were forced to close unless they sold substantial meals.

Ministers will announce which areas will be placed into which tier on Thursday under the new plan, with lawmakers able to vote on the system before it comes into force. The tiers will be reviewed.

The move is likely to be met with fierce resistance from some lawmakers who argue that the country cannot afford to close shops and hospitality again after unemployment numbers and debt jumped, and economic output plunged 20 percent in the second quarter.

The government has argued that the virus will overwhelm hospitals and cripple the economy if it is left unchecked. The opposition Labor Party said a package of support would be needed for any business having to close.

Meanwhile, Scotland, Wales and Northern Ireland are also under varying levels of restrictions, set by their local governments.