The U.S. student-debt crisis – and why it is strange to China
By Zhou Minxi 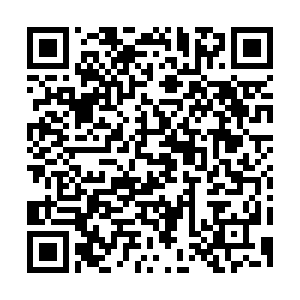 Joe Biden may have won the election as a safe centrist, but he is already challenged to a bold move no predecessor has attempted before: writing off 1.6 trillion student debt on day one of his presidency.

A proposal to cancel up to 50,000 U.S. dollars in student loans owed per borrower for over 45 million Americans has been put forth by Democratic senators Chuck Schumer and Elizabeth Warren, who argued that canceling the debt will work as a massive economic stimulus and provide relief for Americans struggling financially in the face of the pandemic-induced economic crisis.

The senators urged Biden to achieve this by using executive action as president without going through Congress, along with more than 200 organizations in a joint letter.

Biden has pledged a $10,000 debt cancellation per borrower as part of a coronavirus relief plan, though he called on Congress to forgive those loans.

The idea of student loan forgiveness gained traction earlier while Warren was running for the presidency as a Democratic candidate, as was Senator Bernie Sanders, who went further by calling for all student debt – regardless of individual circumstances – to be erased. Both Warren and Sanders, whose platforms were notably more progressive than Biden's, have made what used to be considered a radical idea a serious policy goal that has won the hearts of young people nationwide.

Last week, a tweet from Schumer with the hashtag #CancelStudentDebt thrust the issue back into the spotlight. The topic began trending on Twitter immediately, drawing out tens of thousands of supporters to add their voices to the conversation. 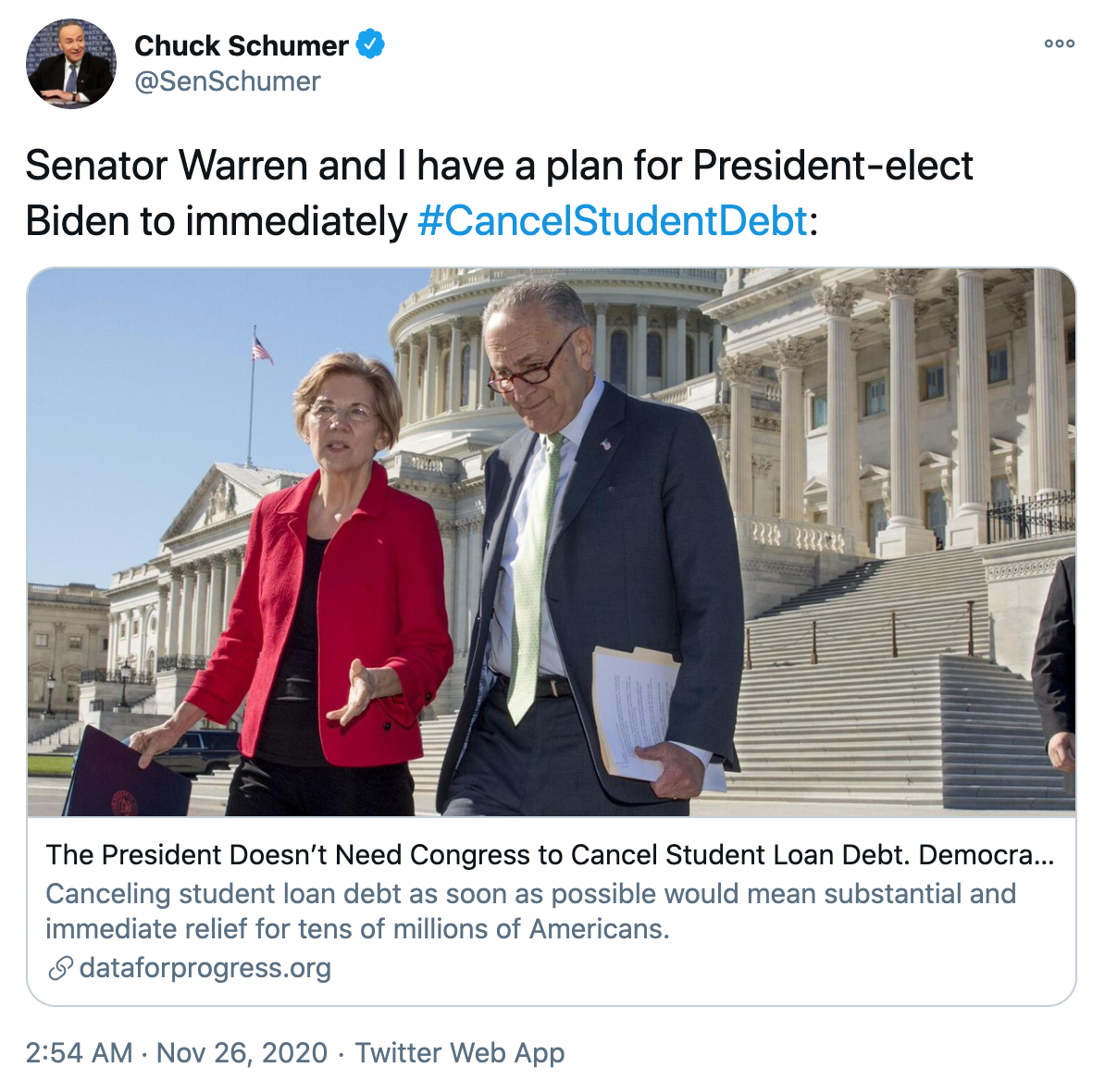 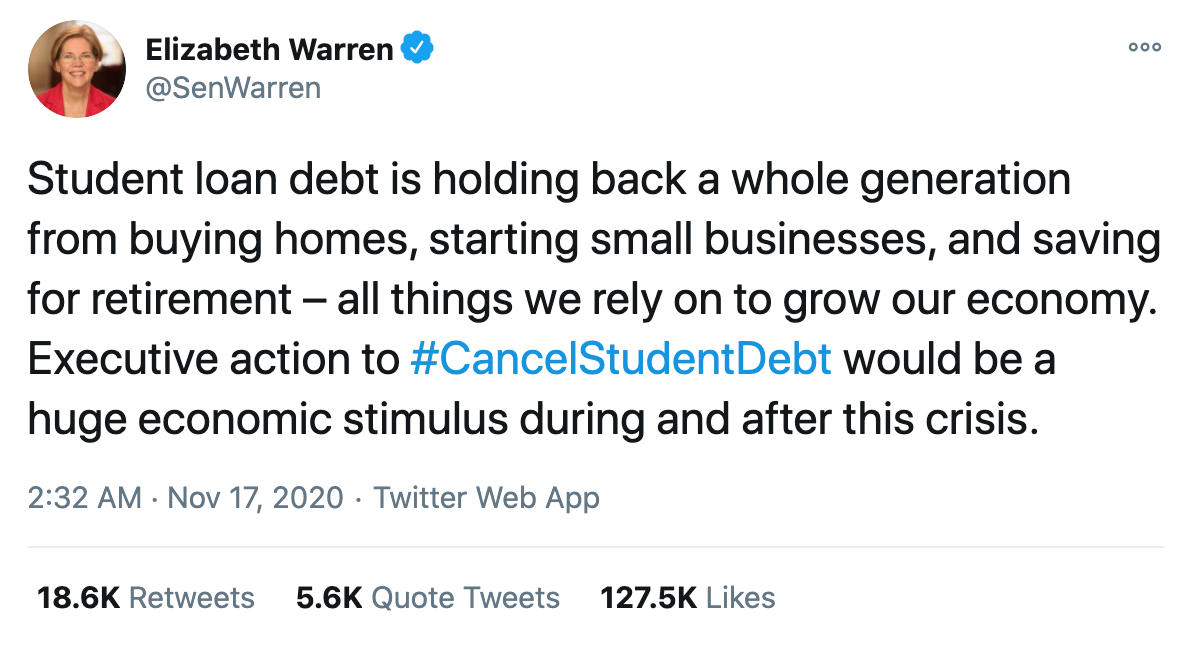 But opponents argued a cancellation would not be fair to those who had paid back their student debts through hard choices or chosen not to go to college due to those concerns. Others also questioned the effectiveness of student debt cancellation as an economic stimulus.

In March, the Trump administration temporarily suspended federal debt repayments in response to the COVID-19 pandemic. The pause is scheduled to end on December 31, leaving Biden, who promised to fix the crisis on the campaign trail, with the choice to either continue Trump's policy or wipe out the debt altogether when he assumes office in January.

How U.S. college becomes unaffordable for most

Outstanding student debt in the U.S. hit an astonishing $1.6 trillion in February 2020, up from around $830 billion in 2010, with nine million borrowers in default. U.S. student loan debt is now bigger than credit card debt and auto loans.

All this was before COVID-19 crippled the U.S. economy.

A new petition addressed to Biden, started by the Student Debt Crisis organization and signed by more than 132,000 people as of this week, calls the crisis "a matter of economic survival for millions of people." 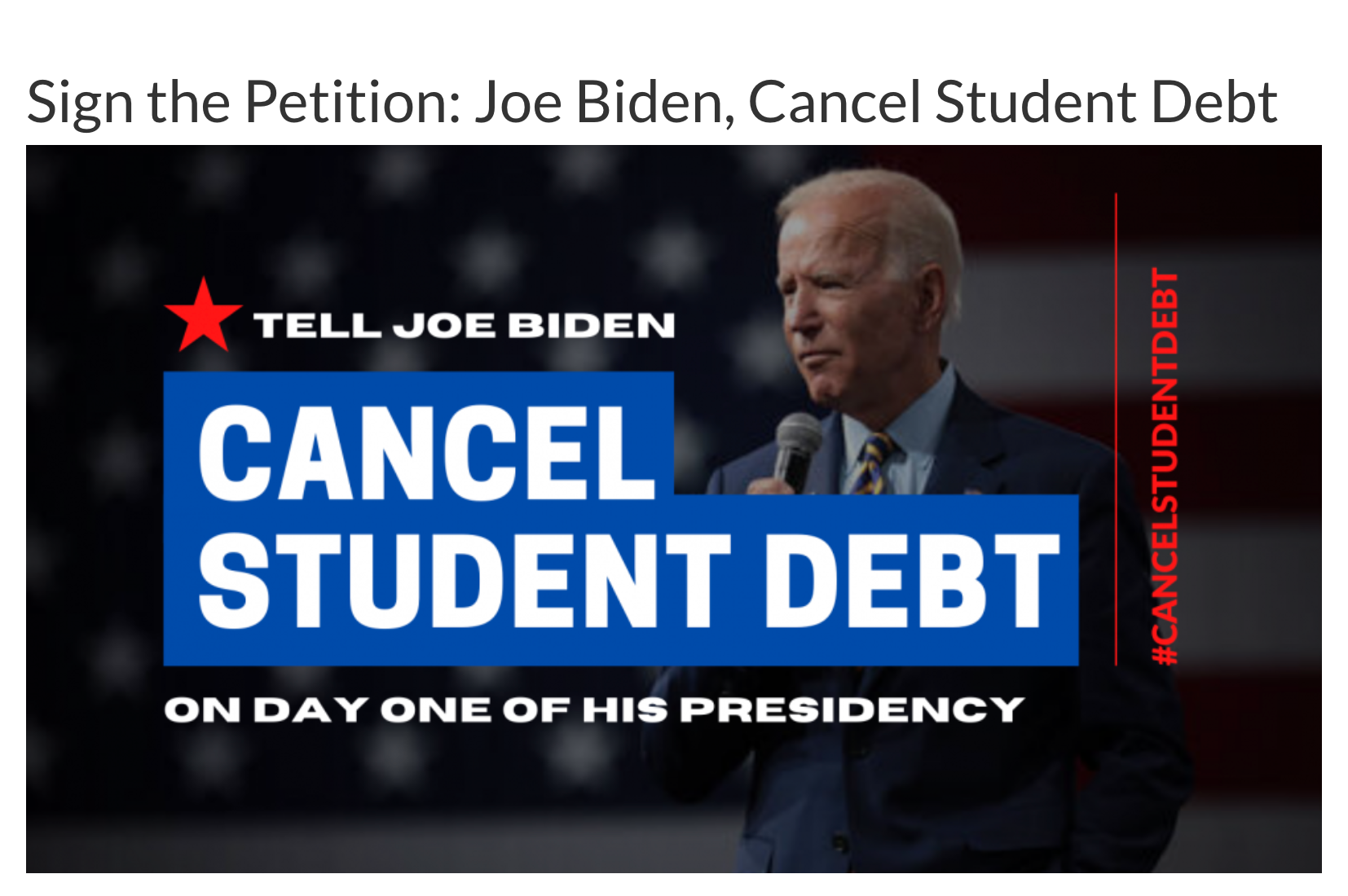 A petition calling on Joe Biden to cancel student debt using executive action on day one of his presidency. /studentdebtcrisis.org

A petition calling on Joe Biden to cancel student debt using executive action on day one of his presidency. /studentdebtcrisis.org

"I went to college on the premise that having a college degree will help you find a job and earn significantly more than those who don't… but my wages don't match my education and I barely make it month to month." A student named Whitney, from Milwaukee, shared her story on the petition site.

"At this rate, I will never own a home, my credit is terrible, and I have no money saved so if an emergency happens, I could end up homeless," said the graduate with a master's degree.

Getting a college education is increasingly leaving the average American broke. The College Board data in 2019 showed the costs for private colleges in the U.S. are closer to $48,510 and for public colleges $21,370, increasing 25.3 percent and 29.8 percent respectively in the last 10 years. 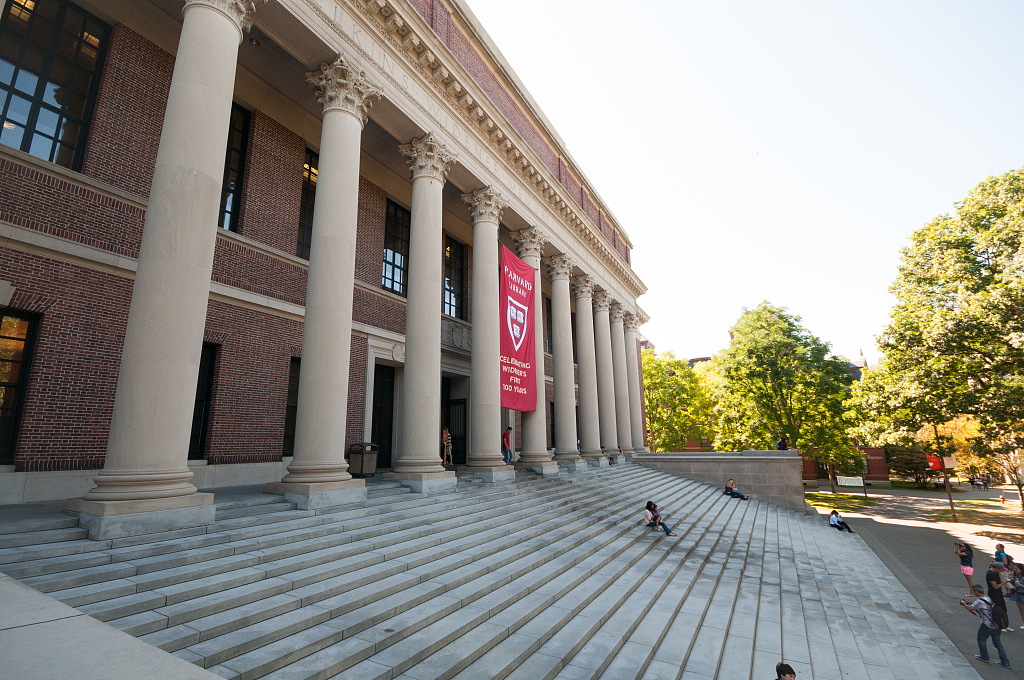 Meanwhile, middle-class incomes remained largely stagnant during this period. Although strained, white middle-class Americans, who often feel obliged to support their children's college education, are also the group most likely to be rewarded for doing so.

Unlike them, minorities from poorer backgrounds are both indebted and defaulting at significantly higher rates than the national average. One of the reasons has been that people of color, especially African Americans, are disproportionately targeted by predatory loans from less reputable, for-profit colleges, contributing to increased racial disparities.

The U.S. Congress in 2005 voted to strip private student loans off bankruptcy protection, leaving millions with no escape from mountains of debt that could take many years to pay back.

"This is something that has been crushing the hopes and dreams of too many Americans for far too long," noted Andrew Yang, another former presidential candidate for the Democrats, in a recent interview with Yahoo Finance, adding that there are people in their 50s and 60s still struggling to repay their student debt.

If the world's richest nation struggles with a student debt crisis, how do people from less developed parts of the world pay for colleges?

In China, for example, student debt is almost non-existent since most of the top universities in the country are not only public but also enjoy generous government subsidies. As a result, tuition fees and living costs, including dorms, books, and on-campus dining, have been kept low since the 1980s, the end of all-free college education in the country.

Chinese students and a staffer inside a university canteen. /VCG

Chinese students and a staffer inside a university canteen. /VCG

A majority of undergraduate courses charge from 3,000-6,000 yuan (around 450-900 U.S. dollars) each year, and the living costs typically under 1,000 yuan (150 U.S. dollars). Besides, there are various financial aids available for students from poorer rural background.

For most families, there isn't a need to take out a loan. In circumstances where such a loan is indeed needed, any debt incurred is usually cleared in a few years after graduation, even with a modest salary.

This is in stark contrast to the U.S., where most prestigious universities are private while being almost always out of reach for an ordinary family.