China-ASEAN Expo in Nanning: A new center for the world's economy
World Insight with Tian Wei 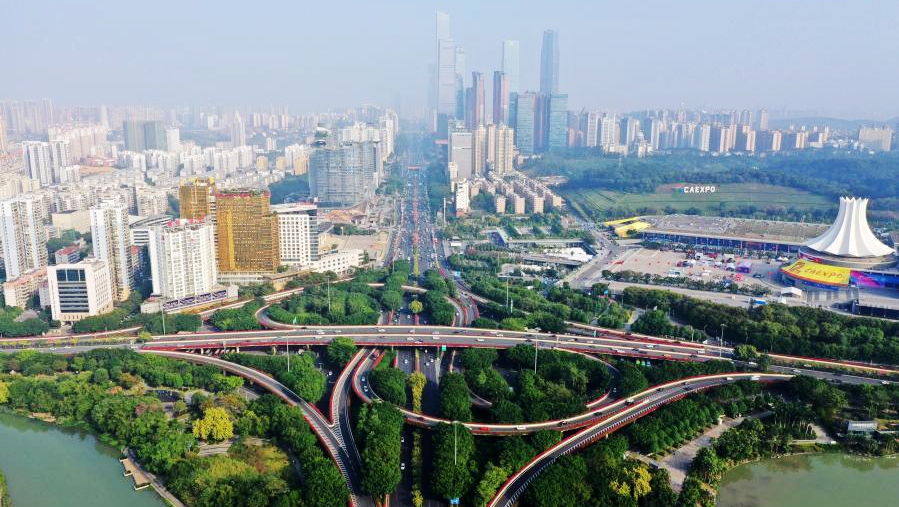 According to the McKinsey Global Institute which studies economic trends, for much of the 20th century, the world's geographic economic center was in the North Atlantic. However this year, the institute calculates that the world's economic center has shifted to the border of Europe and Asia.

The synergy of the region is reflected more potently by cities like Nanning, which is currently hosting the China-ASEAN Expo; or Shanghai, which hosts the annual China International Import Expo; or Kuala Lumpur, which hosted the 32 APEC Summit. CGTN Host Tian Wei explores how important RCEP and the Asia-Pacific are to global economic growth.

The signing of RCEP on November 15 may not have gotten as many headlines as the U.S. election results, but they are both symbolic of the world reversing from unilateralism and re-engaging with globalization.

Dr. Azmi Hassan, a senior political analyst from Malaysia, says, "RCEP took eight years of negotiation. It shows that big countries like China and Australia can work with ASEAN in an open liberal trade system. This is an important message to the world."

RCEP is a much needed global pact at this time since it connects both high-tech and industrial economies with more agrarian and raw material dependent ones.

Moreover, most of these economies, with two notable exceptions in Indonesia and Philippines, were able to keep the COVID-19 pandemic at bay.

Qian Jun, the executive dean of the Fanhai International School of Finance at Fudan University, says "China, Japan and South Korea can take inputs from ASEAN nations to produce domestically and sell back throughout RCEP. It is important that while Europe and North America are shut down, that the Asia-Pacific can resume trade form complete production supply chains."

Qian concedes that this does not mean that the Asia-Pacific nations can negate the rest of the world. He says, "During this special year, we need a closed circle. RCEP can help develop this region. And additional members are welcome." Lim Tai Wei, an adjunct research fellow at the National University of Singapore, says, "ASEAN wants to set up the smart city network. 15 to 20 smart cities have been selected by ASEAN to become the forerunners in the Industrial Revolution 4.0. This is where ASEAN can work with China, which is leading in terms of e-commerce and many other technologies."

The current China-ASEAN Expo showcases the technology that China can bring to ASEAN partners. Qian says, "Chinese companies have introduced VR (virtual reality) products into the exhibition. VR and e-commerce are going to be pivotal in our current environment where physical contact must be minimized."

RCEP's benefits may not just be limited to the borders of its current members. Qian says, "RCEP connects the second and third largest economies, namely China and Japan, with Australia and ASEAN. This fantastic trading bloc shows that regional free trade areas are possible. This region can propel global recovery and growth. This is encouraging news for the world."

Likewise, RCEP's influence may not be restricted to economic areas. Dr. Hassan says, "The negotiations between China, Australia, South Korea and Japan were tough. But it shows that all parties can agree. If even RCEP can be negotiated, I don't see any reason a less difficult issue like the South China Sea territorial dispute can't be resolved."

The RCEP agreement is a hopeful moment of global cooperation in a world that so desperately needs more of it. It is no surprise that the world's economic center has drifted, not to the wealthiest but the most integrated economies during this trying time.