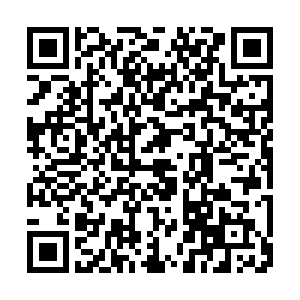 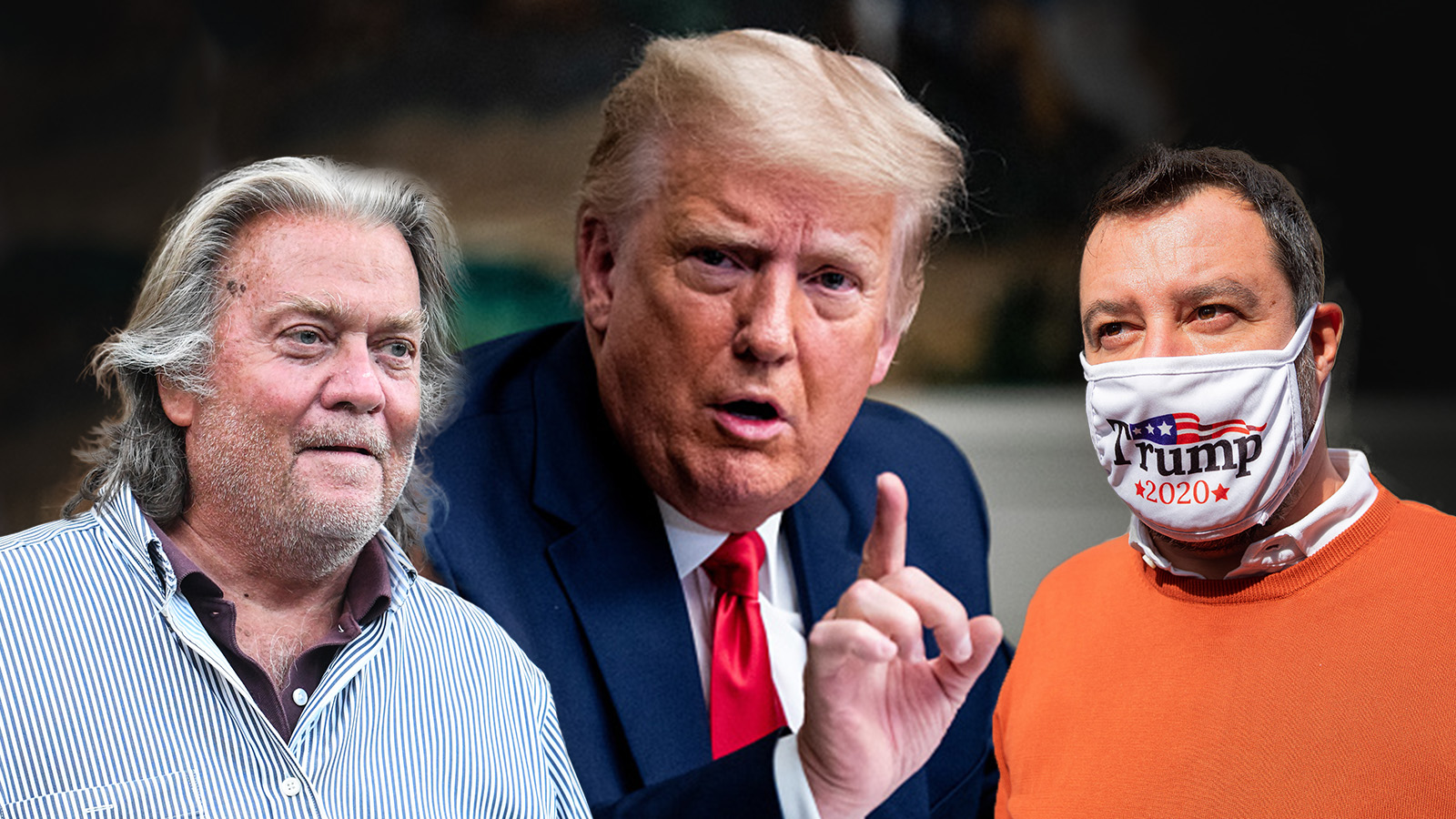 As debate rages as to whether right-wing populism is on the run following Donald Trump's election defeat, some of its highest profile proponents are facing legal peril – including the outgoing U.S. president.

The 74-year-old will be a private citizen again from January 20, meaning his protection from both criminal and civil action will end. Of the many theories as to why Trump refuses to concede defeat in the election, one of the most compelling is that away from the shelter of the White House he will face significant legal exposure.

When the presidential shield is removed, a quiver full of lawsuits will arrow his way and wide-ranging criminal investigations into his company may entangle his family.

The cases against Trump

Trump may find himself on the receiving end of numerous legal actions, but the most damaging are likely to come from his former home state of New York.

Manhattan District Attorney Cyrus Vance and New York Attorney General Letitia James are both investigating Trump's business practices, with criminal charges possible. No American president has ever been charged with a criminal offence. 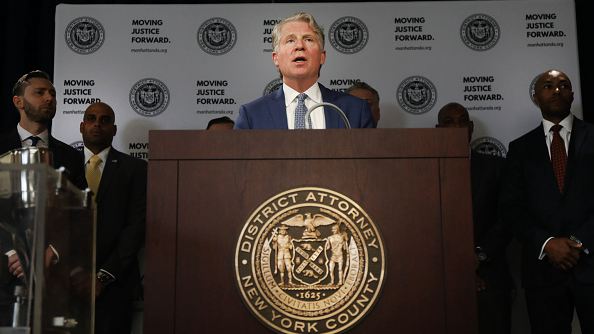 Vance's two-year probe began with the hush money payment made to Stormy Daniels, but is reported to have evolved into a wide-ranging investigation.

Prosecutors were granted access to Trump's personal and corporate tax records in October as they look into what a court filing described as "possibly extensive and protracted criminal conduct at the Trump Organization," though the president's legal team continues to try to block sight of the returns.

If the case is pursued it would be a state matter, and so not covered by any pardon. 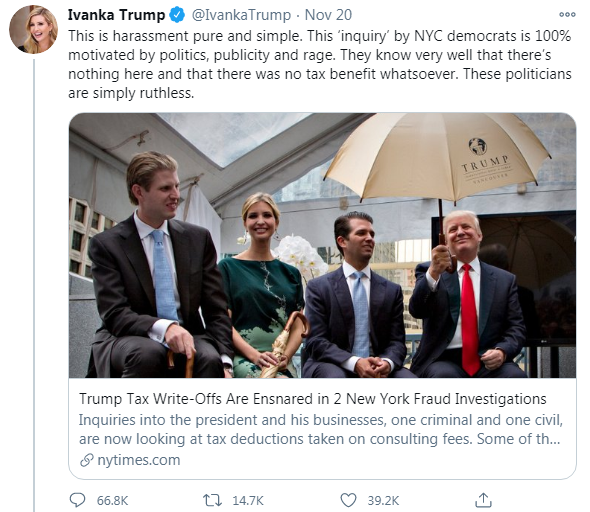 Ivanka Trump tweets in reaction to a New York Times report that the Trump Organization is under investigation. /@IvankaTrump

Ivanka Trump tweets in reaction to a New York Times report that the Trump Organization is under investigation. /@IvankaTrump

James' investigation also potentially entangles the Trump children, with daughter Ivanka lashing out on Twitter in mid-November that the case is "harassment pure and simple." The attorney general's office questioned Eric Trump under oath last year.

A rush for pardons

With Trump's attempts to overturn the election results petering out, talk has turned to pardons for those around him. The New York Times reported on Tuesday that he has discussed granting preemptive pardons to his children as well as to Rudy Giuliani and Jared Kushner, and that the Department of Justice is investigating an attempt to offer a bribe for a pardon.

Nine people close to the Trump White House have been found guilty of crimes over the past four years, including Roger Stone, Paul Manafort and Michael Flynn, the latter of whom is one of 45 people Trump has so far pardoned. 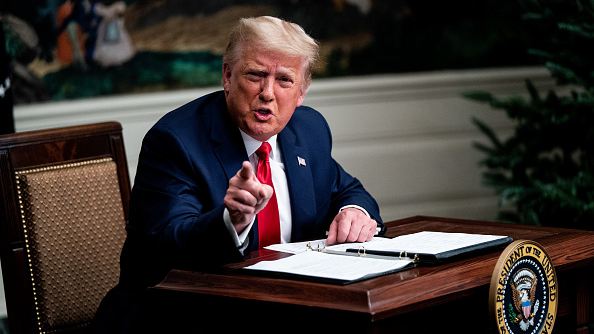 There are also calls for Trump to pardon himself, including from Fox News star Sean Hannity, though any presidential pardon only covers federal crimes, not state or local, and it remains untested whether a self-pardon is legal.

"The president out the door needs to pardon his whole family and himself because they want this witch hunt to go on in perpetuity, they're so full of rage and insanity against the president," Hannity said on his radio show on Monday, echoing language used during Trump's impeachment.

CNN reported on Wednesday that Trump's associates are also lobbying him for pardons "ranging from their personal clients to people whom Vice President-elect Kamala Harris put behind bars" when she was a state prosecutor.

Salvini and the Movement

Away from the White House, two of the loudest voices in the right-wing nationalist world, Steve Bannon and Matteo Salvini, are already on trial.

The men joined forces across the Atlantic in 2018 as part of Bannon's attempt to create an anti-establishment grouping in Europe, called the Movement – a grand plan aiming to harness a populist wave across the EU, inspired by the American's success in propelling Trump to the White House. 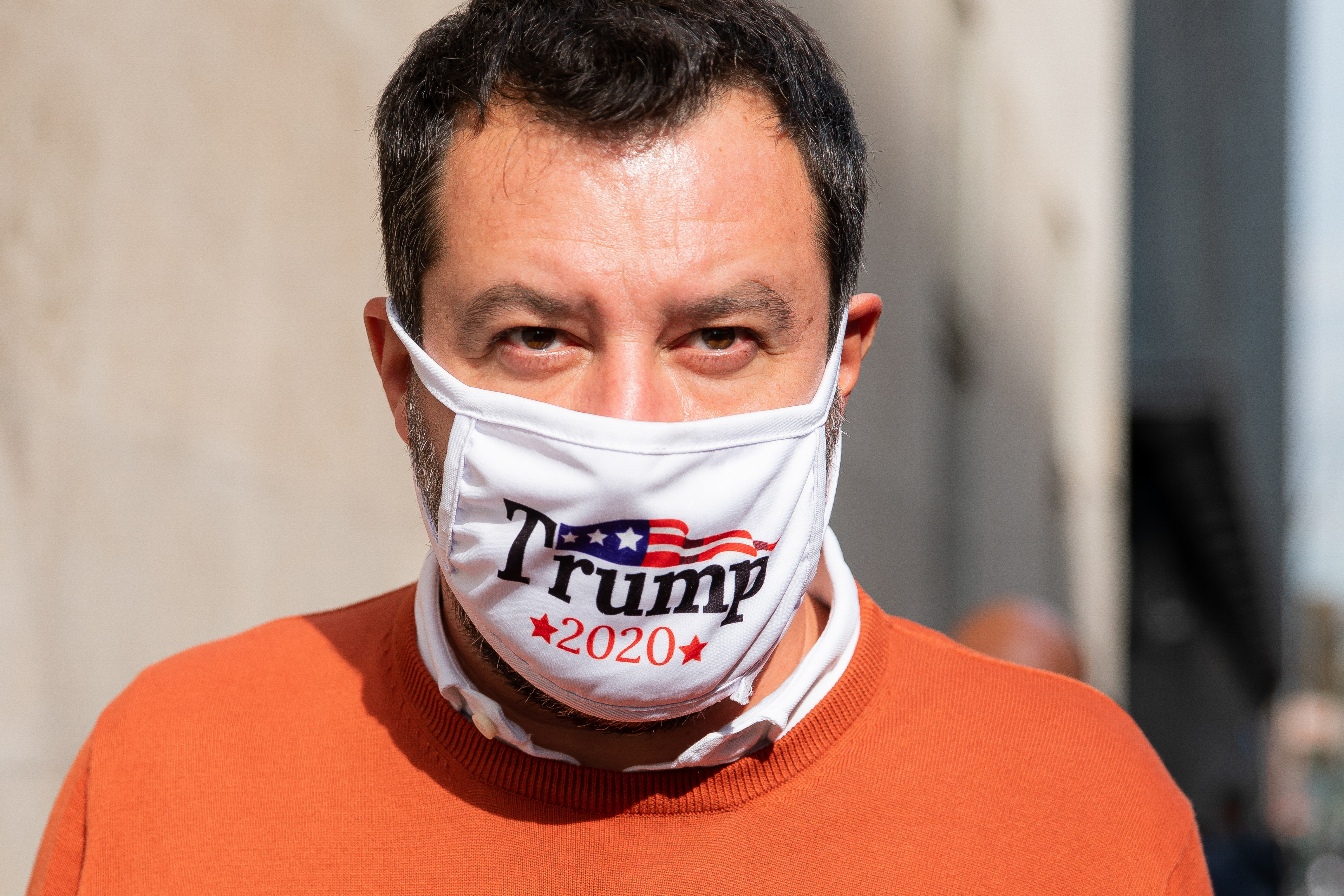 Salvini, the ousted Italian deputy prime minister, is accused of kidnapping for his role, as interior minister, in preventing 116 migrants onboard a coastguard ship from disembarking in 2019.

The 47-year-old withdrew his Lega Nord party from a coalition government in August 2019 in a failed attempt to clinch the premiership, and his fortunes have since waned. Ultimately the Five Star Movement and Social Democrats reached a deal to preserve the government, leaving Salvini on the opposition benches.

A tinge of scandal has also touched Marine Le Pen's far-right National Rally in France, which settled a suit brought by Russian aviation parts company Aviazapchast over a $10.1 million unpaid loan in June this year. Le Pen too has had dealings with Bannon, though she distanced herself from the Movement ahead of the 2019 European Parliament elections.

Back in the United States, Bannon, who continues to champion Trump via his media channels despite a falling out, has been charged with defrauding donors to the "We Build the Wall" project, an attempt to privately fund one of the president's signature policies – building a wall on the U.S.-Mexico border.

The 67-year-old has pleaded not guilty to accusations he played a part in skimming over $1 million from the charity for personal use.

Bannon could also be forced to testify under oath as part of the Federal Trade Commission's into Cambridge Analytica's breach of Facebook data, whereby the firm obtained information about 50 million users of the social media platform. Bannon worked for the company before heading up Trump's 2016 campaign. 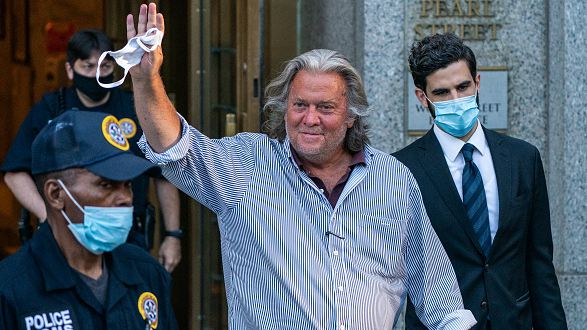 Trump's chief defender in 2020, former New York City Mayor Giuliani, is also reported to be under investigation by the Southern District of New York (SDNY), the famously independent agency whose boss, Geoffrey Berman, was ousted by Trump Attorney General William Barr in June after a two-day standoff.

Giuliani, who once led the SDNY, has been front and center of attempts to reverse the results of the presidential election – Barr said on Tuesday levels of fraud were insufficient to change the outcome – in a fruitless effort which may nevertheless have pleased Trump.

On Tuesday Giuliani was widely reported to have already asked for a preemptive pardon from the president, though it remains unclear what crime he is seeking to preempt.