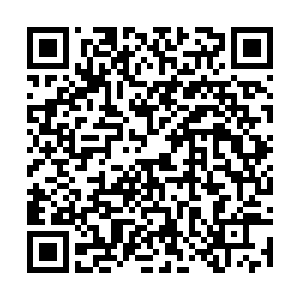 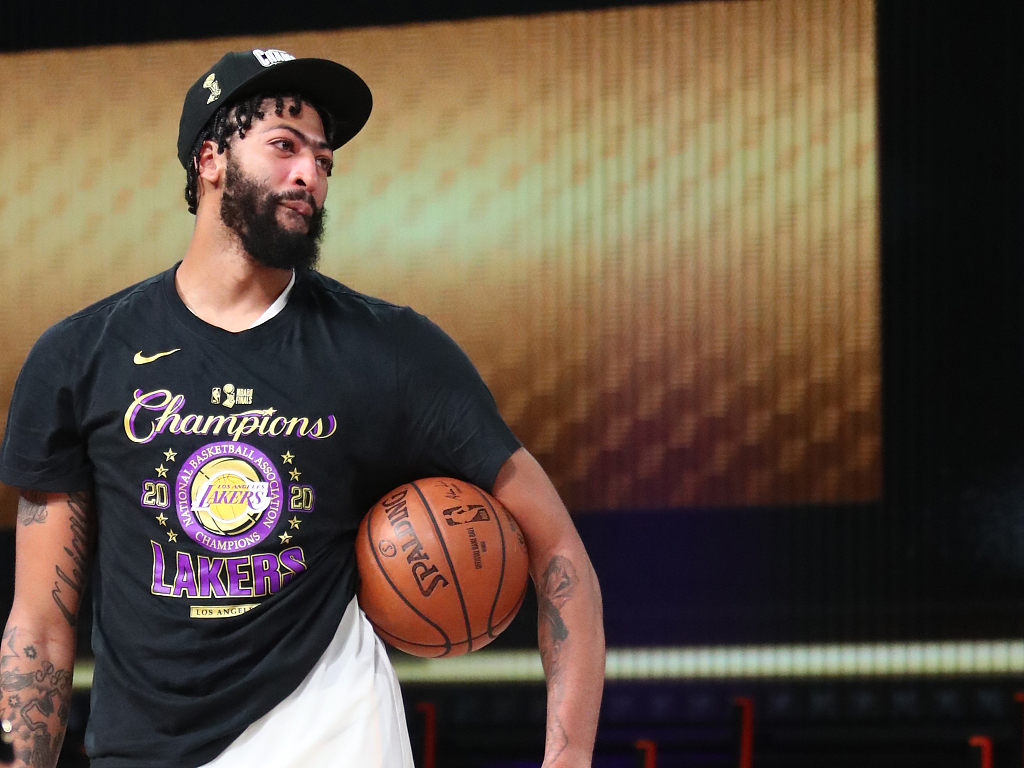 Anthony Davis is finalizing a five-year contract worth up to $190 million to return to the Los Angeles Lakers.

One day after LeBron James agreed to a two-year, $85 million contract extension with the Lakers through 2022-23, Davis committed to the Lakers through the 2024-25 season. Davis' deal includes an early termination clause prior to the fifth year, but the lengthy contract is still a clear declaration that the 27-year-old Davis sees his long-term future with the 17-time NBA champions.

James and Davis won an NBA championship in the first season of their partnership, and they're returning this month with new contracts and a solid chance to repeat.

"Those are great contracts, and they're well-deserved," veteran Lakers forward Markieff Morris said on Thursday from the opening workouts of training camp. "It's a big family, and it worked out the best for everybody."

The Lakers acquired Davis in a trade less than 18 months ago, shipping most of their young core to New Orleans to acquire one of the best big men of his generation. Davis made the All-NBA first team three times and earned six straight All-Star selections with the Pelicans, but only reached the second round of the playoffs once. 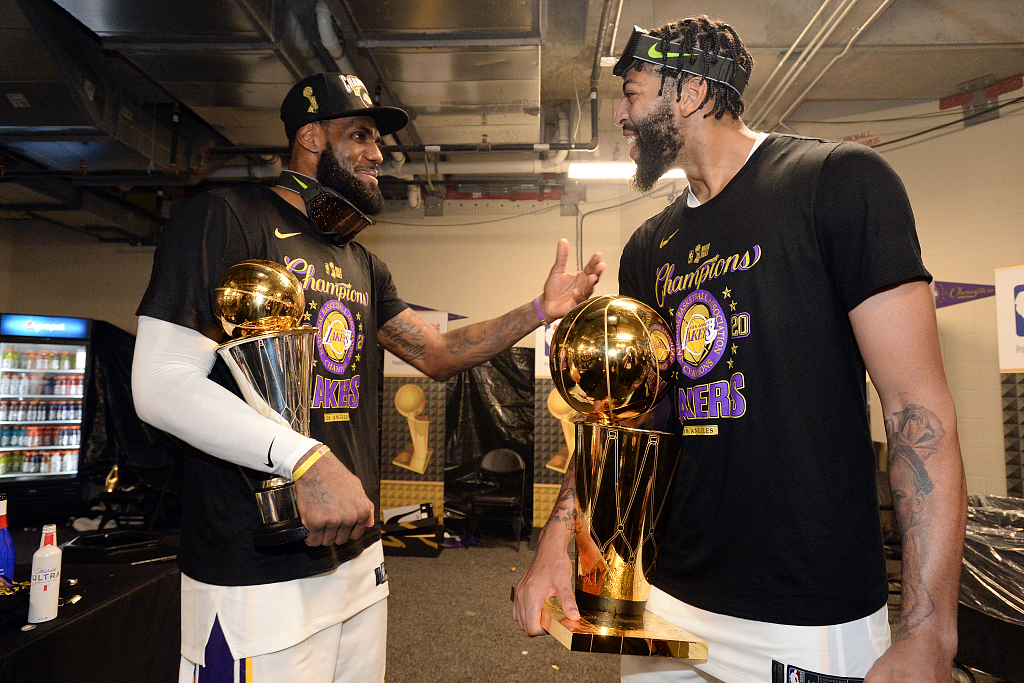 LeBron James #23 and Anthony Davis #3 of the Los Angeles Lakers celebrate after winning Game Six of the NBA Finals at the AdventHealth Arena at ESPN Wide World Of Sports Complex in Orlando, Florida, U.S., October 11, 2020. /CFP

LeBron James #23 and Anthony Davis #3 of the Los Angeles Lakers celebrate after winning Game Six of the NBA Finals at the AdventHealth Arena at ESPN Wide World Of Sports Complex in Orlando, Florida, U.S., October 11, 2020. /CFP

With Klutch clients James and Davis at their core, the Lakers immediately built a championship contender around them last season. The 208-centimeter-tall Davis swiftly clicked alongside James, who molded himself into a point guard and led the NBA in assists to maximize the talent of Davis, who earned his seventh straight All-Star selection.

James and Davis reteamed in the bubble in central Florida and led the Lakers to Davis' first NBA title and James' fourth. The Lakers had missed the playoffs for six straight seasons before their dynamic duo transformed the franchise into champions again, beating the Miami Heat in six games in the NBA Finals.

"Watching AD and LeBron, everything they did was together," said Dwight Howard, who won a ring with the Lakers before moving on to Philadelphia as a free agent last month. "They worked out together, they ate together, they rolled dice together. We called them The Brothers. They were always together, playing video games, doing something."

"Even though there was games where LeBron was having triple-doubles, he made sure he fed AD and AD got off," Howard added. "I just think when you have two guys like that who are willing to do whatever it takes to win, it brings up the morale of the team. They put everything on their shoulders. They knew they had guys around them, but it was, 'OK, LeBron. OK, AD. We've got to do this. It starts with us. We've got to be on the same page at all times.' They did a really good job with it."

The Lakers are returning with a roster around James and Davis that looks even better than last season's championship squad. NBA veterans Marc Gasol and Montrezl Harrell have replaced Howard and JaVale McGee to keep Davis out of the center spot during the regular season, while Wesley Matthews replaced inconsistent Danny Green on the wing and gifted point guard Dennis Schröder arrived to take ball-handling pressure off James.

Davis was never expected to leave the Lakers after he declined a $28.7 million U.S. player option to become a free agent last month, but many league observers thought Davis would go for a shorter contract to maximize his mobility, as is the preference of many modern stars and Klutch clients. 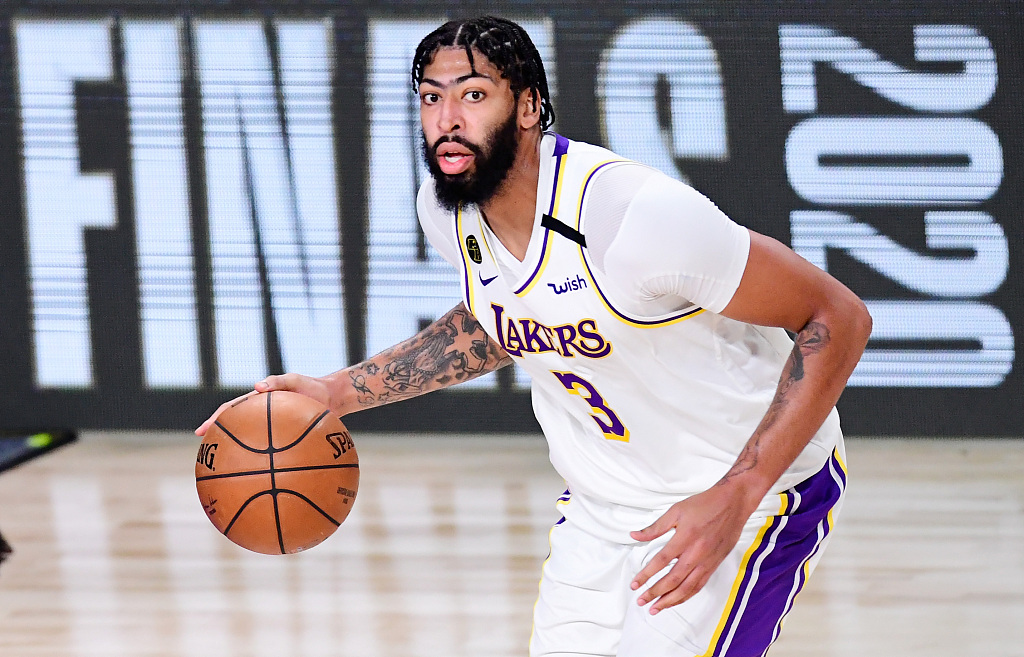 Anthony Davis drives the ball during the third quarter against the Miami Heat in Game Six of the 2020 NBA Finals in Orlando, Florida, U.S., October 11, 2020. /CFP

Anthony Davis drives the ball during the third quarter against the Miami Heat in Game Six of the 2020 NBA Finals in Orlando, Florida, U.S., October 11, 2020. /CFP

Instead, Davis chose the longest possible contract, albeit with an opt-out after four years. If Davis had set up his deal to become a free agent in 2022, he could have re-signed to receive a starting salary worth 35 percent of the team's salary cap.

In truth, the differences between his current contract and that hypothetical deal are only a few million U.S. dollars – and for Davis, security with a title contender clearly was worth a few million.

Davis will make more than $32.7 million this season, more than $35 million next season and nearly $38 million in 2022-23. The fourth year of the contract is worth about $40 million, and the fifth year would be worth more than $43 million.

Davis excelled throughout his first season with the Lakers, averaging 26.1 points, 9.3 rebounds, 3.2 assists and 2.3 blocks per game. Along with hitting 50 percent of his shots and a career-high 84.6 percent of his free throws, Davis was a dominant presence in the paint and on the wing throughout the year while the Lakers played the Western Conference's stingiest defense.

Davis finished second to Milwaukee's Giannis Antetokounmpo in the NBA's defensive player of the year voting.

Davis was even better in the playoff bubble, averaging 27.7 points, 9.7 rebounds, 3.5 assists and 1.4 blocks. He hit 57 percent of his shots and 38 percent of his 3-pointers, including a remarkable game-winning 3 at the buzzer in Game 2 of the Western Conference finals against Denver.

Although the Lakers' massive fan base couldn't attend their latest championship run, Davis is already cementing a spot among the franchise's greatest big men, a proud lineage stretching from George Mikan and Wilt Chamberlain through Kareem Abdul-Jabbar, Shaquille O'Neal and Pau Gasol.

Davis spent his first seven NBA seasons as the centerpiece of the Pelicans, but he could only lead them to two playoff appearances, and he requested a trade in February 2019. The players traded from Los Angeles to New Orleans for Davis included Brandon Ingram, who got a five-year, 158 million U.S. dollars deal from the Pelicans last month, and playmaker Lonzo Ball.

(Cover: Anthony Davis #3 of the Los Angeles Lakers smiles during the trophy ceremony of Game Six of the NBA Finals at AdventHealth Arena in Orlando, Florida, U.S., October 11, 2020. /CFP)