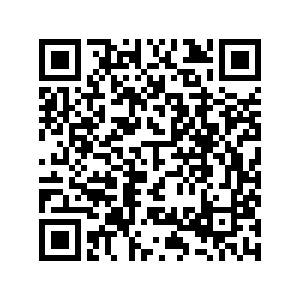 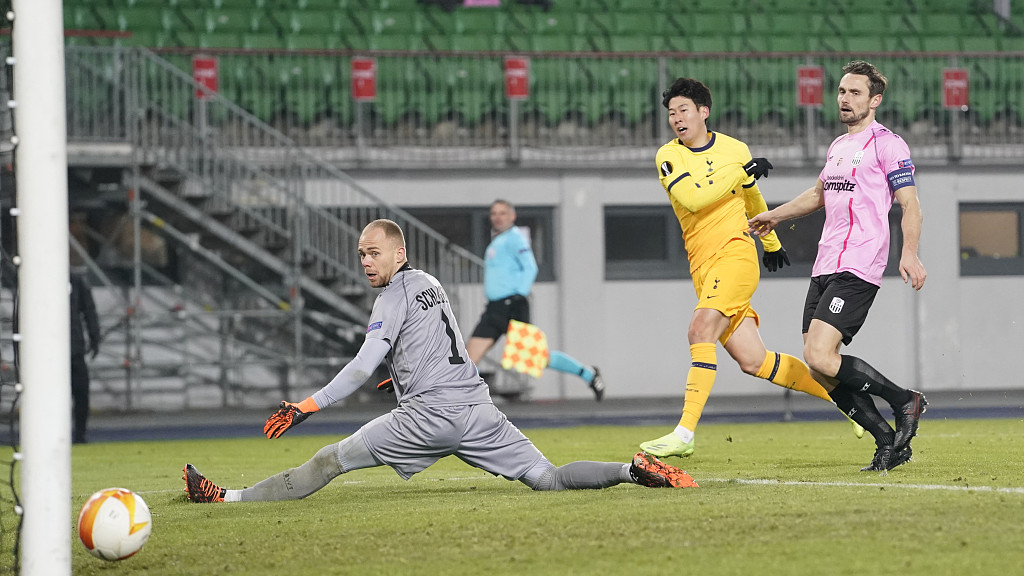 Son Heung-min of Tottenham scores the second goal of his team against Alexander Schlager and James Holland of LASK at the goal to 1:2 during the UEFA Europa League group J match between LASK and Tottenham Hotspur at Raiffeisen Arena in Linz, Austria, December 3, 2020. /CFP

Son Heung-min of Tottenham scores the second goal of his team against Alexander Schlager and James Holland of LASK at the goal to 1:2 during the UEFA Europa League group J match between LASK and Tottenham Hotspur at Raiffeisen Arena in Linz, Austria, December 3, 2020. /CFP

Premier League leaders Tottenham struggled to gain the draw they needed in Linz, finishing 3-3 on Thursday thanks to two penalties and securing a place in the knock-out rounds of the Europa League.

The result in Austria ensured that Antwerp will also advance from Group J.

Elsewhere in the early games, Braga, AC Milan, Lille, Villarreal, Dinamo Zagreb and Red Star Belgrade ensured their places in the last 32 with one round of group games still to play. They join Leicester, Arsenal, Hoffenheim and Roma who had already qualified.

In Linz, the home team dominated the first half but only scored once, through Peter Michorl. Spurs, who had not managed a shot on target, won a penalty for handball in added time. Gareth Bale converted for his 200th career goal.

Son Heung-min put Spurs ahead on the counter attack in the 56th minute.

With Linz still threatening, manager Jose Mourinho made a series of defensive substitutions.

Tottenham had three center backs, three full backs and two defensive midfielders on the field by the 84th minute when Johannes Eggestein still found a huge hole and lashed in a shot that Joe Hart reached but could not keep out.

Three minutes later, Spurs regained the lead. One of the two attacking players, Steven Bergwijn was tripped to earn a penalty and the other, Dele Alli, swept it home.

Spurs could not keep the lead. Young Frenchman Mamoudou Karamoko smashed in an equalizer from outside the box in added time.

The draw was enough to put Tottenham through and next week they will host Antwerp, who beat Ludogorets 3-1, with first place at stake. 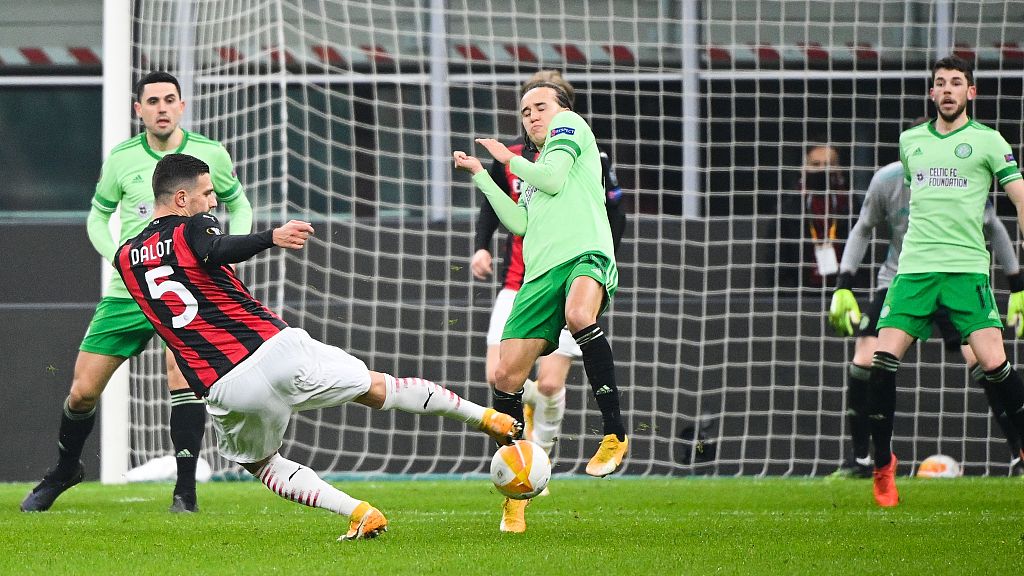 In Group H, AC Milan fell two goals behind at home to eliminated Celtic but rallied to win 4-2 and advance.

Tom Rogic and Odsonne Edouard scored for the visitors in the first 14 minutes, but Hakan Calhanoglu and Samuel Castillejo responded with two quick goals midway through the half.

Jens Petter Hauger and Brahim Diaz, with a clever chip, struck in the second half.

Milan are second in the group, one point behind Lille who also came from behind to win at home.

Visitors Sparta Prague were reduced to 10 men in the 65th minute when Ondrej Celustka received two yellow cards in three minutes, yet the visitors took the lead through Ladislav Krejci in the 71st minute.

Lille sent on Burak Yilmaz in the 77th minute. The Turkish striker poked home the equalizer three minutes later and smashed home the winner four minutes after that.

In Group G, Braga crushed AEK, 4-2, in Athens to join Leicester in the next round. The Foxes fielded a weakened side against Zorya in the Ukraine and lost 1-0.

Villarreal secured first place in Group I as Samuel Chukwueze scored the only goal away to Sivasspor in Turkey.

Sivasspor will travel to Tel Aviv next week needing a victory to wrest second place from Maccabi. Maccabi missed a chance to ensure qualification when they drew, 1-1, away to Qarabag in a match moved from Azerbaijan to Istanbul for security reasons.

Red Star qualified for the next round holding group winners Hoffenheim to a goalless draw in Belgrade. The visitors had 17 attempts on goal but could not score.

Dinamo Zagreb won 2-0 in Rotterdam to secure first place in Group K. Feyenoord travel to Austria next week needing to win at Wolfsberg to advance.