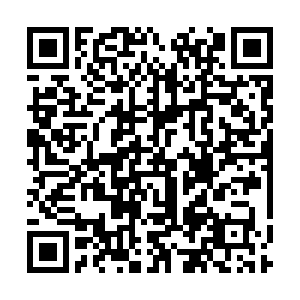 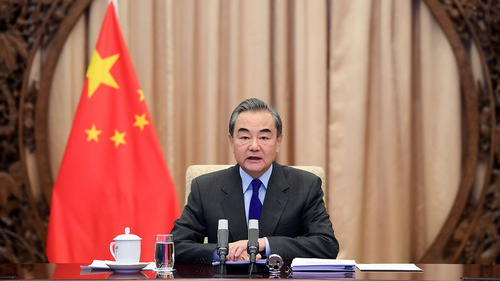 In a time of souring China-U.S. relationship, Chinese State Councilor and Foreign Minister Wang Yi on Monday urged "a constructive attitude" from both sides when dealing with disputes to "avoid escalation" when meeting with several American business representatives via video link.

We need mutual respect toward each other's historical and cultural inheritance, core interests, and major concerns, as well as choices by the two countries' peoples concerning their respective national systems and development paths, Wang stressed in his five-point proposals in promoting the sound and stable development of China-U.S. ties.

In the meeting with a delegation of the board of directors of the U.S.-China Business Council, he also proposed increasing public support for bilateral ties, urging the two sides to support enhanced exchanges in fields such as legislative bodies, businesses, media, and the youth, while calling on people of insight in both countries to give more objective and rational information and introduce to the general public the real picture of China's development and China-U.S. cooperation.

Calling China-U.S. economic and trade cooperation the "ballast stone" of bilateral ties, Wang expressed the hope the USCBC and the U.S. business sector can play their due role in bringing bilateral relations back on track and make active contributions in the process.

He urged joint efforts from China and the United States to ensure "a stable transition" of China-U.S. relations against disruptions of all kinds. 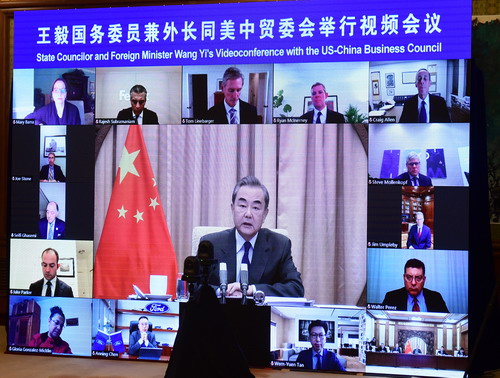 Chinese State Councilor and Foreign Minister Wang Yi (C) speaks with a delegation of the board of directors of the U.S.-China Business Council via video link, December 7, 2020. /Chinese Foreign Ministry

Chinese State Councilor and Foreign Minister Wang Yi (C) speaks with a delegation of the board of directors of the U.S.-China Business Council via video link, December 7, 2020. /Chinese Foreign Ministry

Wang urged the U.S. to perceive China in a strategically correct way. He stressed that China is committed to a path of rejuvenation that pursues peaceful development and mutually beneficial cooperation with all countries to achieve win-win and all-win results.

"We expect and believe the U.S.-China policy can and should return to an objective and rational track sooner or later," Wang said.

Second, Wang called on the two countries to have communication and dialogue at all levels. The two sides can work out lists of dialogue, cooperation, and dispute management to provide a clearer picture for the maintaining and developing of bilateral ties, Wang said.

He also encouraged sectors of strategic studies and businesses to enhance dialogue to provide intellectual and social support for the sound and stable development of China-U.S. relations.

Wang said the two countries should expand mutually beneficial cooperation. He suggested cooperation in COVID-19 pandemic responses, economic recovery, including the resumption of macro-economic policy dialogue and coordination, and responses to climate change.

He also proposed coordination in major global challenges and hotspot issues such as poverty reduction, anti-terrorism and nonproliferation, and enhanced cooperation under multilateral frameworks.

The attending U.S. delegation members, including USCBC's Chairman Tom Linebarger and President Craig Allen, said the council attaches great importance to ties with China, hailing China's return to normalcy in economic development and the impetus injected into a global recovery.

They voiced support for enhanced dialogue and rebuilding mutual trust between the two countries, expressing the hope to play a more significant role in China's new development paradigm. They also pledged USCBC's active role in promoting the U.S.-China relations in the right direction.