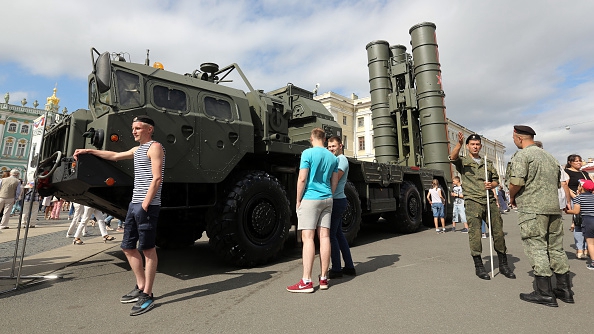 An attendee poses for a picture in front of an S-400 Triumph mobile antiaircraft missile defense system displayed on Palace Square during the Russian Navy day in St. Petersburg, Russia, July 28, 2019. /Getty

An attendee poses for a picture in front of an S-400 Triumph mobile antiaircraft missile defense system displayed on Palace Square during the Russian Navy day in St. Petersburg, Russia, July 28, 2019. /Getty

Editor's note: Freddie Reidy is a freelance writer based in London. He studied history and the history of art at the University of Kent, Canterbury, specializing in Russian history and international politics. The article reflects the author's opinions and not necessarily the views of CGTN.

While President Donald Trump may have directed sanctions against Turkey in response to the installation of Russian S400 antiaircraft missiles, it is a response that has been expected for some time. What does the latest move from Washington signal, though, and how far can NATO members push Turkey before destabilizing the organization itself?

Both the U.S. Congress and Senate have been pressing Donald Trump to confront Turkey for some time. The latest and most forceful attempt came when Congress added a clause to the National Defence Authorisation Act, compelling the president to take action against Ankara.

While the president can exercise a veto against the clause, it would hold up the budget in its entirety. Instead, President Trump opted for a somewhat targeted and limited approach. The U.S. has sanctioned the Presidency of Defence Industry (the SSB) - the agency responsible for Turkish military procurement. Secretary of State Mike Pompeo also announced the U.S. had placed a ban on all U.S. export licenses and authorizations.

The sanctions also target the president of the SSB, Ismail Demur, freezing assets, and restricting visa rights. This measure has also been applied to others within the government agency.

The dispute centers on a longstanding policy within NATO that military equipment of Russian origin or from other foreign powers deemed a potential adversary are not procured. The integration of "combatant" military technology with NATO hardware represents a major security threat due to the potential of exposing weaknesses and tactics which may be exposed and exploited by the alliance's adversaries.

As the Secretary of State stated, "Today's action sends a clear signal that the U.S. will not tolerate significant transactions with Russia's defense or intelligence sectors." Mr. Pompeo argued that Washington had made it clear "at the highest levels and on a number of occasions" that its purchase of the S400 platform would result in punitive action.

Ever since President Erdogan's retaliation and constitutional restructuring in response to the 2016 challenge to his position as president, Erdogan has found himself continually at odds with Western governments both in the U.S. and the European Union.

The challenge for the U.S. and NATO is that that third party is Russia, the very state which represents the greatest threat to the NATO alliance. 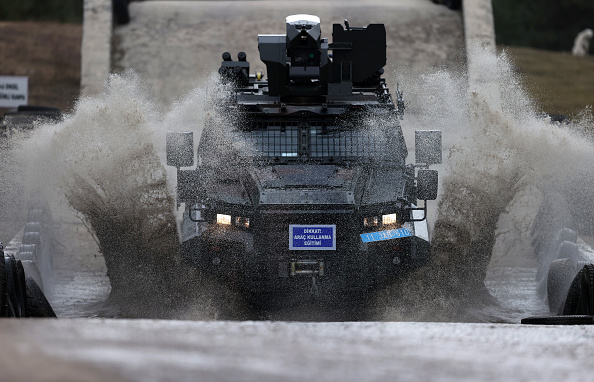 A view from the track at the Transport Training Center in Bilecik's Sogut district during the training of gendarmerie armored vehicle driver candidates, December 12, 2020, in Turkey's Bilecik province. /Getty

A view from the track at the Transport Training Center in Bilecik's Sogut district during the training of gendarmerie armored vehicle driver candidates, December 12, 2020, in Turkey's Bilecik province. /Getty

In fact, Turkey is the second-largest military power within NATO and is consequently of great strategic importance. It is for this reason that Donald Trump has been reluctant to entrench the schism between the alliance and its longstanding bulwark member state, Turkey.

Indeed, Ozgur Unluhisarcikli, head of the Ankara office of the German Marshal Fund thinktank, told the Financial Times that U.S. sanctions were "on the lighter end of the spectrum."

While this is true, the State Department may well have also presented Ankara with an olive branch, coupled with a threat. Turkey's financial sector has long felt the specter of U.S. sanctions across their markets. The restraint of the U.S. will have allayed market fears in the short term at a time of great economic uncertainty. The move, though, simultaneously demonstrates America's willingness to deliver on its own policy objectives.

Meanwhile, Turkish political parties signed a joint declaration on Tuesday stating that they "call on the United States to turn back from this grave mistake immediately" and that the sanctions "were not in line with the spirit of alliance."

The disagreement has already seen Turkey removed from the F-35 fighter program and faltering relations go beyond those with the U.S., with repeated conflicts with the European Union, and in particular, France.

Beyond these disagreements, Turkey requires access to European markets and military interoperability with the U.S. as much as NATO, and the EU requires a stable Turkey protecting the continent's Eastern flank. A resolution, therefore, is mutually desirable.

Russian antiaircraft systems do represent a red line for the U.S., though, even if NATO has previously tolerated Greece indirectly purchasing the older S300 generation. As such, the alliance is set for a fractious period until the issue can be resolved. A change of U.S. president will not deviate from this objective.

A military conflict may be out of the question, but a war of words is inevitable, and NATO members will be asking Turkish citizens whether Russian-procured systems are a price worth paying for risking exclusion from the world's largest single market and strategic alliance.