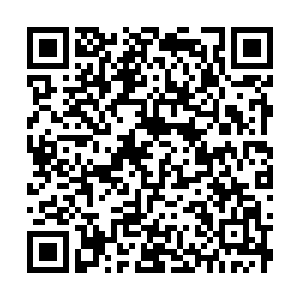 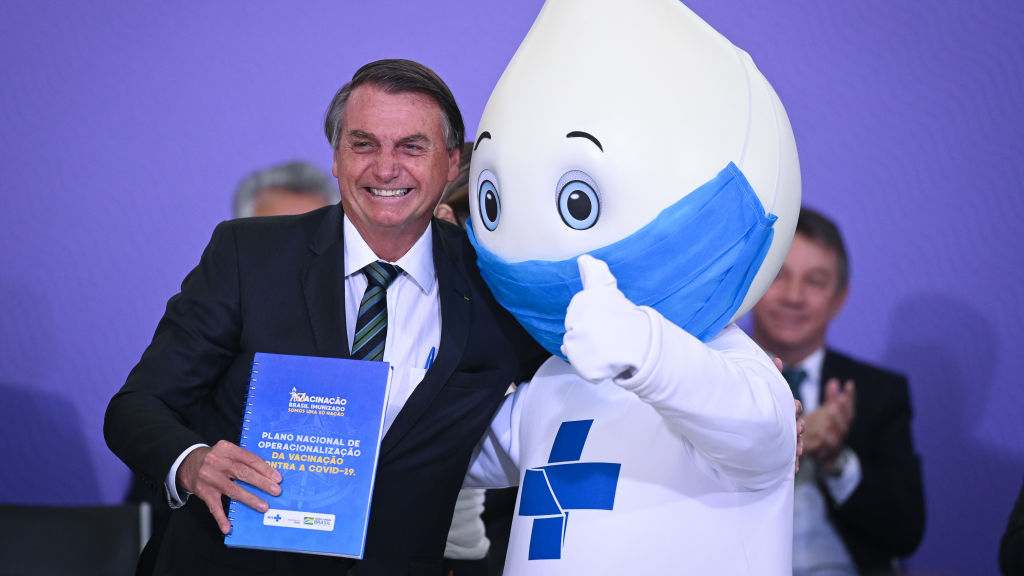 Brazilian President Jair Bolsonaro reacts next to ''Ze Gotinha,'' the vaccination campaign mascot, during the launching ceremony of the National Vaccination Operationalization Plan against COVID-19 at Planalto Palace in Brasília, Brazil, December 16, 2020. /Getty

Brazilian President Jair Bolsonaro reacts next to ''Ze Gotinha,'' the vaccination campaign mascot, during the launching ceremony of the National Vaccination Operationalization Plan against COVID-19 at Planalto Palace in Brasília, Brazil, December 16, 2020. /Getty

Editor's Note: Ken Moak taught economic theory, public policy and globalization at the university level for 33 years. He co-authored the book "China's Economic Rise and Its Global Impact" in 2015. The article reflects the author's opinions, and not necessarily the views of CGTN.

Brazilian President Jair Bolsonaro seemed to be in a dilemma, wanting cooperation with China at the recent 2020 BRICS summit but doing all he could to ban Huawei and Chinese made COVID-19 vaccines. These contradicting stances could exacerbate the economy and the pandemic.

At the 12th BRICS summit in November, Bolsonaro pledged to work with the leaders of Russia, India, China and South Africa to curb the COVID-19 pandemic for economic recovery in the post-pandemic period. This was a "wise" choice because Brazil, more than ever, needs China's cooperation, the former being the third worst hit by the pandemic in terms of infections and second in terms of deaths, after the U.S. and India.

The Brazilian economy was hit hard by the pandemic, contracting by nearly 10 percent in the second quarter of this year, according to World Bank figures. But thanks to increases in agriculture and industrial production and trade, the economy enjoyed positive growth in the third quarter, prompting the government to revise contraction by only 4.7 percent for 2020. But this "optimism" could "evaporate" if Bolsonaro succeeds in banning Huawei 5G equipment and Chinese vaccines.

Dismantling and replacing Huawei equipment with those made by Ericsson, Nokia or Samsung would be time-consuming, incurring significant costs and delaying 5G rollout. This explains why the telecom companies threatened legal action if Bolsonaro continues to pursue banning Chinese-made telecom equipment. Besides, there is no guarantee that Brazil's national security will not be breached by using Ericsson, Nokia and Samsung equipment because some parts of these companies' products are produced in China or integrated into the same ecosystem. 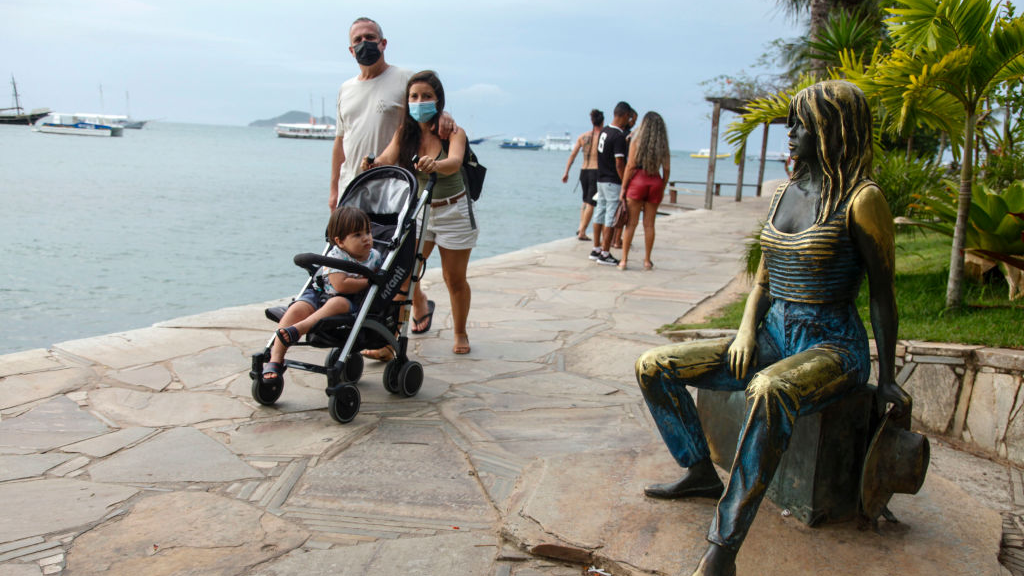 Tourists walk next to a Brigitte Bardot statue in Buzios, Brazil, after the decision of the Rio de Janeiro State Justice to reverse the closure of the city due to the increase in COVID-19 cases, December 18, 2020. /Getty

Tourists walk next to a Brigitte Bardot statue in Buzios, Brazil, after the decision of the Rio de Janeiro State Justice to reverse the closure of the city due to the increase in COVID-19 cases, December 18, 2020. /Getty

Equally, if not more important, banning Huawei would harm Brazil's economic prospects because the company's 5G equipment provides quick information gathering and dissemination. For example, Reuters reported that the Chinese company's equipment increased farm production because of its "fast broadband communication and real-time cloud data processing," enabling farmers to gather information on crop infestation and management in one hour compared to three days without Huawei 5G.

Applying the same logic, banning Huawei would put the Brazilian economy at disadvantage. Quick information gathering and dissemination is essential for making timely and efficient business decisions in an increasingly competitive world. It is important for businesses to know as quickly as possible about consumer preferences, allowing them to produce and distribute the goods in a timely and efficient fashion.

It might be for these reasons that many Brazilian politicians such as Vice President Hamilton Mauro opposed banning Huawei, particularly when the decision was made for no reason other than "idolizing" Donald Trump. Bolsonaro was reported to have visited Trump many times and is impressed with the U.S. president's version of populism.

On banning Chinese COVID-19 vaccines with the lame excuse that because the virus "originated" in China, they would "untrustworthy," Bolsonaro could risk further damage to the economy and take more human lives. Indeed, the British newspaper The Guardian reported on December 13 that the local news portal Folha de São Paulo charged Bolsonaro with "homicidal negligence," the government abandoning the people and leaving them to die for ideological and personal biases.

Brazilian national Natalia Pasternak, founder of the Question of Science Institute, also claimed that the president boycotting CoronaVac, the Chinese vaccine "absurd." One reason is that relying largely, if not solely, on the Oxford-AstraZeneca vaccine would not be enough to contain the surging death rate because 100 million doses were offered, not enough to vaccinate the over 212 million population, particularly when two doses are required or recommended or needed.

The fact of the matter is Brazil needs China's help to pull it out of the former's economic doldrums and control COVID-19. Exporting opportunities to the West, India and Japan will not forthcoming in the near future because their faltering economies are made worse by surging infection and death numbers, forcing these markets to take harsher and longer lockdowns.

China, on the other hand, is the only major economy expected to register over 2 percent and 8 percent growth in 2020 and 2021, respectively, because of its early reopening of the economy, stimulus packages and "dual circulation" strategy.

It calls for boosting domestic demand through urbanization and infrastructure investment and will require China to import huge quantities of food and other natural resources over the next five years and beyond.

Moving tens of millions of people from the countryside to cities will need more food from abroad to mention another export prospect for countries such as Brazil to exploit.

Against this backdrop, Bolsonaro's loyalty to Trump and ideological or personal biases could "burn" Brazil, taking his political fortunes with it. The Brazilian president has only a 37 percent approval rating, after all.

Now that Trump is on his way out of the White House, Bolsonaro should work with China to improve Brazil's national interests. Biting the hand that feeds you, on the other hand, only leads to economic disaster; just ask Australian Prime Minister Scott Morris. Besides, China did nothing to Brazil except helping it develop.