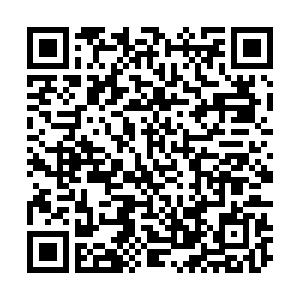 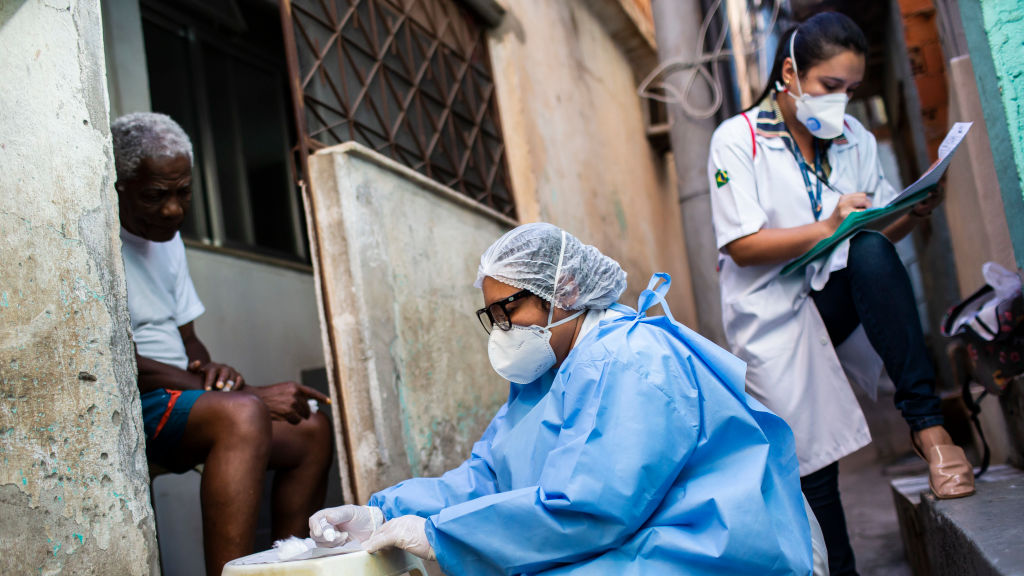 A Health agent of the City of Rio de Janeiro performs a COVID-19 rapid test on Aloizio dos Santos, 78, while another writes down the information of the person at Morro da Mangueira (favela) in Rio de Janeiro, Brazil, September 3, 2020. /Getty

A Health agent of the City of Rio de Janeiro performs a COVID-19 rapid test on Aloizio dos Santos, 78, while another writes down the information of the person at Morro da Mangueira (favela) in Rio de Janeiro, Brazil, September 3, 2020. /Getty

Editor's note: Azhar Azam works in a private organization as market & business analyst and writes about geopolitical issues and regional conflicts. The article reflects the author's opinions, and not necessarily the views of CGTN.

The coronavirus pandemic continues to weigh on the health and life of millions of people across the world and is showing no signs of abating with the lockdown measures dramatically elevating global poverty and inequality in almost every country for the first time in decades, Oxfam said in its whistleblower report "Shelter from the Storm".

A deep analysis of social protection transfers in 126 low and middle income countries between April and September further found that there were highly asymmetrical investments between and mostly within countries, which may be the consequence of "an increase in global inequality and the erosion of social cohesion."

Whereas hundreds of millions are freed from jobs or seeing their income slashed, lack of public financial support for 2.7 billion people experiencing economic devastation threatens to push a large size of global population to poverty that the United Nations Sustainable Development Goals (SDGs) envisioned to end in all its forms everywhere by 2030.

In September 2015, the intergovernmental body set a target to implement nationally appropriate social protection systems and measures for all and achieve substantial coverage of the poor and the vulnerable.

But with people falling into debt, skipping meals and keeping children out of school amid surging global poor headcount and hunger over worldwide inequality between rich and poor nations, the other key targets such as zero hunger and quality education could suffer a strong setback too.

With eight out of ten countries that failed to reach even half of their population to provide state assistance, the grim findings by the non-profit group and consulting firm Development Pathways urge major economies to shelve pursuit for protecting global domination and pool their efforts in reducing universal disparity through strengthened international cooperation.

Showing solidarity with the fraught nations wasn't perhaps so crucial before, because the crisis is overwhelming the women workers in large, especially the ones who are associated with the worst-affected sectors such as garments, services and domestic service and have had their paychecks dropped by 60 percent in the first month of the outbreak. 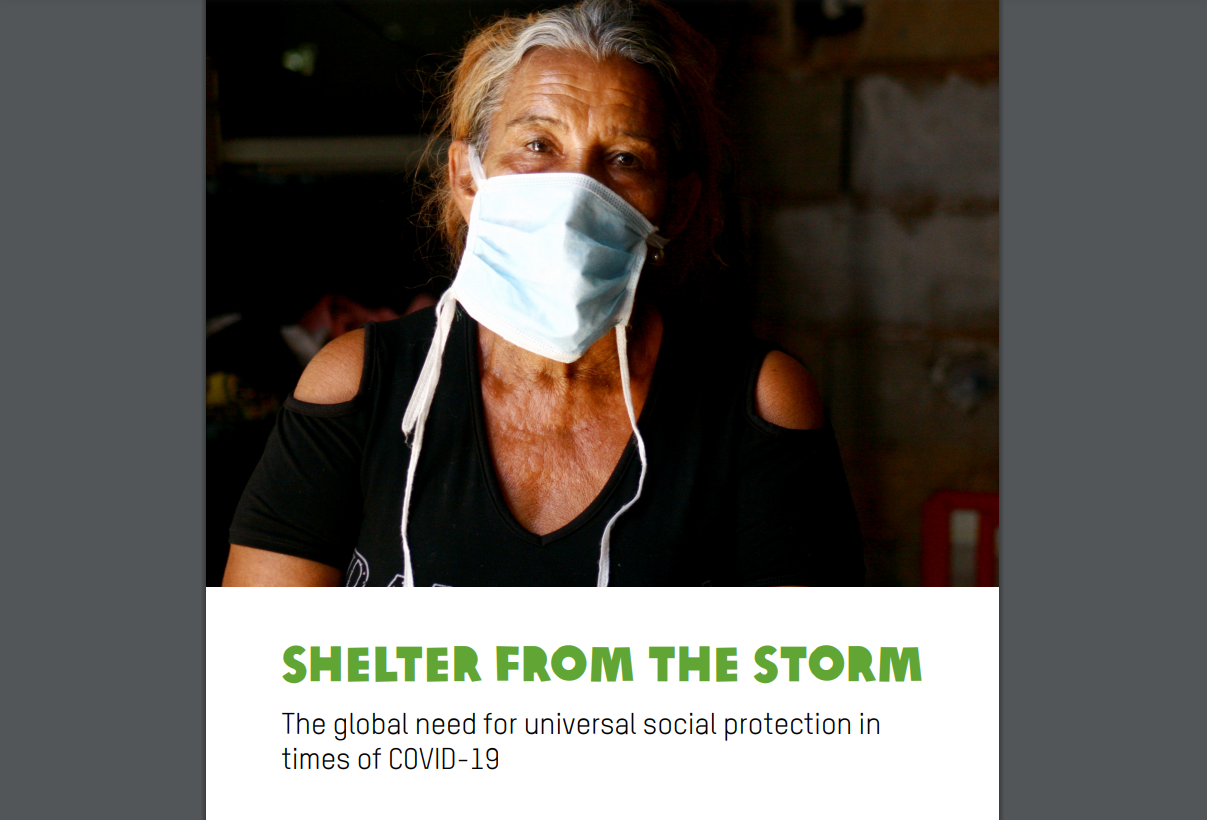 Screenshot of the Oxfam report "Shelter from the Storm: The global need for universal social protection in times of COVID-19" shown on its website.

Screenshot of the Oxfam report "Shelter from the Storm: The global need for universal social protection in times of COVID-19" shown on its website.

The international leaders need to work together for building a more equal and sustainable world since the disruption of the COVID-19, compounded with the challenges of conflict and climate, is poised to wedge as many as 150 million people in a vicious circle of extreme poverty by 2021.

Over the years, factors like systemic racism, legacy of colonialism and trade and technological protectionism have created inequalities on the international level and affronted damage to global unity. This trend needs to be challenged through a changed mindset, promotion of cooperation and safeguarding multilateral trading system to bolster the global fight against destitution, particularly in Africa where the phenomenon of "feminization of poverty" is unfolding over intensifying gender inequality.

When it comes to poverty eradication, China is a textbook example. Over the last 40 years or so, it has lifted more than 700 million out of absolute poverty. While the total accounted for about 70 percent of the global poverty alleviation, Chinese success inspires other developing nations to seek Beijing's help in framing a national poverty reduction strategy.

China unveiled its Targeted Poverty Alleviation strategy in 2014. The nationwide campaign used local registration data of over 128,000 villages to identify and provide support to battered areas and played a vital role in pulling 68 million rural residents out of poverty between 2014 and 2019 through five-pronged policy measures including industrial development, social security, education, eco-compensation, and relocation.

A prominent U.S. economist and author Jeffrey Sachs described the eradication of absolute poverty by China as "a great historic accomplishment." Complementing Chinese efforts that even the pandemic couldn't derail, director of the Center for Sustainable Development at Columbia University and a senior United Nations adviser said Beijing stopped the virus without stalling its tirade against poverty.

Internationally, China is a staunch defender upholding the global institutions, promoting multilateralism, ending social inequality, boosting international development and extending financial aid and sharing expertise to the virus-hit countries so that the developing economies may not lag behind due to the devastating economic impacts.

For economic and social development in affected countries, Beijing pledged to provide $2 billion over the next two years other than working from the G20 forum to implement the Debt Service Suspension Initiative for poorest economies. The concept dubbed as "human beings living under the same sky" by a French writer and sinologist Sonia Bressler would allow embattled countries to allocate more funds for the social sector and ease poverty levels.

Experts say China's whirlwind rise – becoming the worlds' second-largest FDI recipient after the U.S. and enabling it to generate employment and improve technological skills of the native workforce besides opportunities for small businesses to supply large factories – can be a source of inspiration for African leaders to catalyze growth and could potentially help to rid the continent of extreme poverty once and for all.

Quite a few developing nations seek to fast-forward the industrialization process for quick employment generation but fall short of realizing their objectives over economic constraints. Under the drawback, they can learn from China that is actively pursuing to modernize its economy through innovation.

Unlike U.S. President Donald Trump who is focused to provide Americans the priority access to the COVID-19 vaccine, Chinese President Xi Jinping months before vowed and remains committed to make China-made immunization available nationally and internationally ensuring accessibility and affordability in the developing nations.

After a painstaking exercise of eight years, China has now lifted all the rural poor out of absolute poverty and delisted all impoverished counties from its poverty list. While the success will indeed narrow the gap of social inequality within the country and increase domestic consumption and imports for the global good – Chinese moves to earmark funds for economic and social development, write off loans and ship low-cost vaccines, once available, to the developing countries would allow them to resume their poverty mitigation initiatives.