Download
Job Challenge: Shadowing the guardians of the forest in southwest China
By Nadim Diab 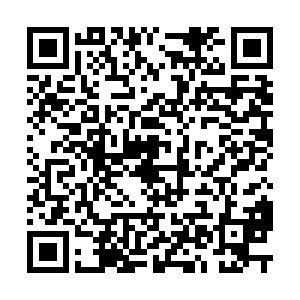 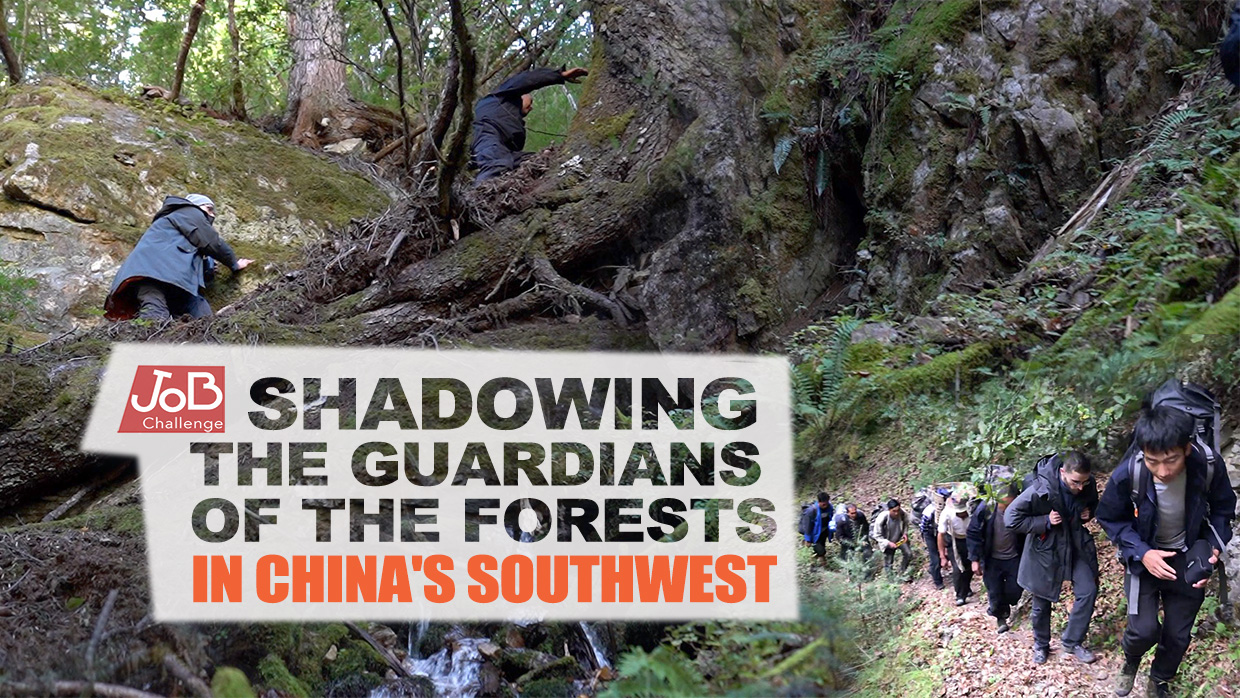 First there was a prick, then a sharp spike of pain. I let out a screech – deep, loud, animalistic – as I wrapped my right hand around my left wrist, forming a tight bracelet of flesh and pressing hard to numb the stabbing sensation. A bump erupted through the pores like a furious volcano that radiated an aura of heat and sent out ripples of redness across my skin.

The assailant was nowhere in sight but it left behind something to be remembered by: a tiny stinger lodged on the dorsal side of my hand.

Adrenaline was still gushing through my bloodstream when I felt another stab, this time on the back of my neck. I had ventured, yet again, too close to the buzzing hives, alarming a few of the residents initially with my sheer presence and later with my desperate attempt to swat at them.

It was the last day of a week-long assignment in Diqing Tibetan Autonomous Prefecture, a verdant enclave in the northwestern corner of Yunnan Province. But my send-off wasn't going to be without a memorable surprise.

The pain from the successive stings was slowly dissipating. I was fine, aside from two pimples and a bruised dignity. The goodbye gift was a sobering reminder that when you poke at nature, nature pokes back. It's a lesson that villagers here and elsewhere learned when unchecked logging on the upper reaches of the Yangtze River played a part in widespread floods in 1998 – the worst the country had seen in 44 years. 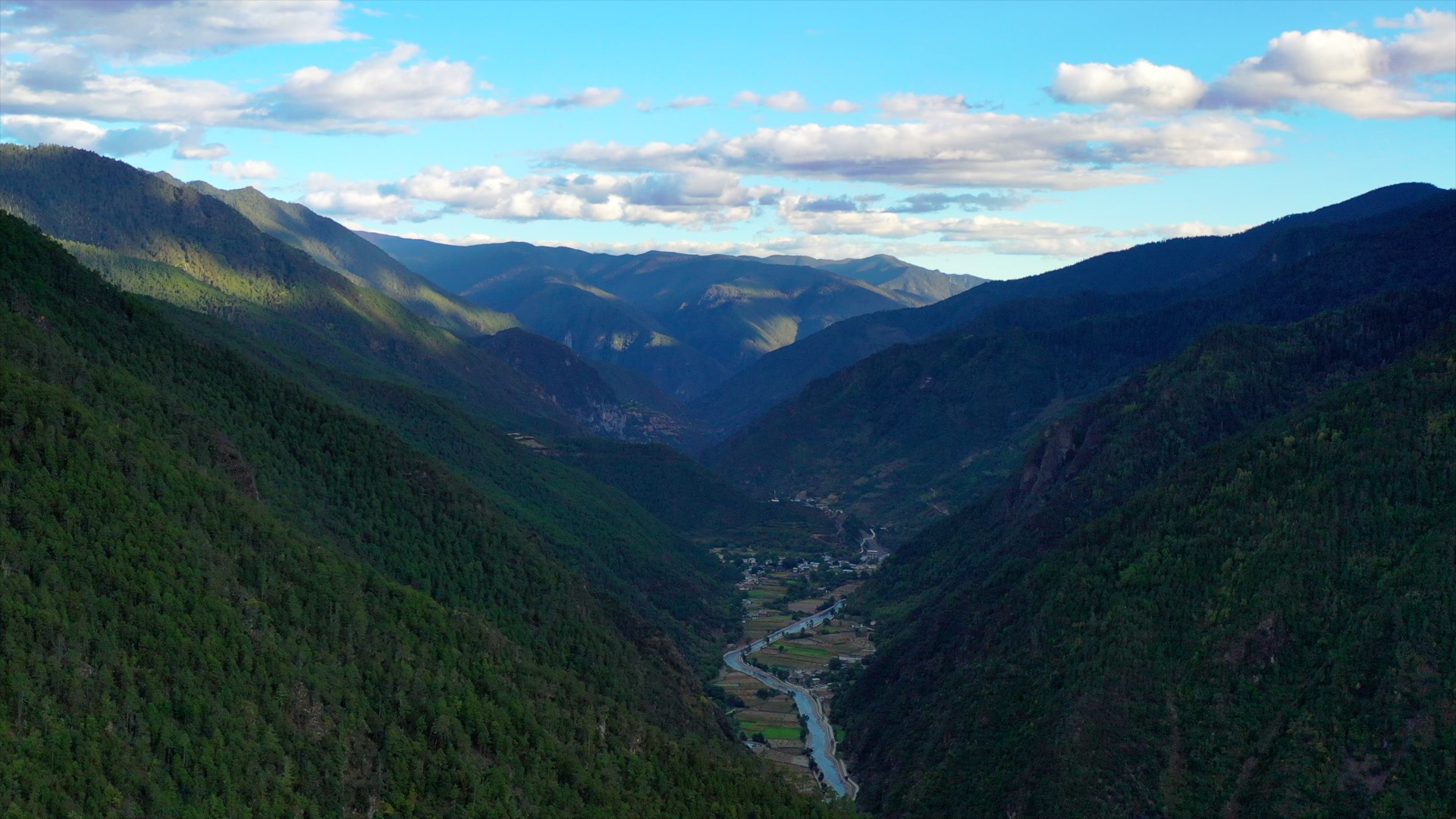 Diqing is an oasis of green beauty in the deep mountains of southwest China's Yunnan Province. /CGTN

Diqing is an oasis of green beauty in the deep mountains of southwest China's Yunnan Province. /CGTN

Through much of the 1980s and 1990s, trees – some as old as 250 years – were being razed at a ravaging speed in Diqing. But the forestry industry was big business, bringing in as much as 80 percent of the prefecture's revenue by 1993 and throwing a lifeline to poor villagers.

The nationwide floods opened people's eyes to the frailty of development at the expense of environmental integrity and prompted a wave of changes that swept through the region, including Diqing. Logging was banned and timber mills were forced to switch off their machines.

It was the beginning of an eco-conscious movement that contributed to the expansion of forest coverage in Diqing from 65 percent in 2000 to 75 percent in 2011. Nature was breathing again and that had the potential to offer a sigh of relief to villagers suffocating under the weight of penury.

When China doubled down on its anti-poverty campaign in 2015, Diqing turned to an old and trusty friend for assistance. Forests have long offered subsistence to their dwellers, could they also guide them out of poverty?

Rong Sanbu, a 26-year-old official with the forestry department of Xiaruo township in Deqin County, believes so. For the past four years, he's been part of the local ecological poverty alleviation work, a project that places environmental conservation at the heart of poverty reduction efforts. Think of it as killing two birds with one stone, except no animals are harmed.

"Protecting the environment is protecting ourselves," he told me with noticeable conviction on my first day shadowing him.

Together, we followed a group of forest rangers on a two-day excursion deep into wondrous woodlands dotted with lichen-festooned trees. I played catch-up with the wardens as they navigated precipitous paths with agility and grace, looking for signs of human encroachment, searching for animal traps and installing infrared cameras to monitor wildlife.

The jungles have become their home, a place of intimate familiarity and soothing comfort. Around the campfire, they spoke of their fond and frightening memories in the woods with such enthusiasm that it was hard to imagine there used to be a time when some of them roamed the same grounds, locked and loaded, in pursuit of prey to hunt. 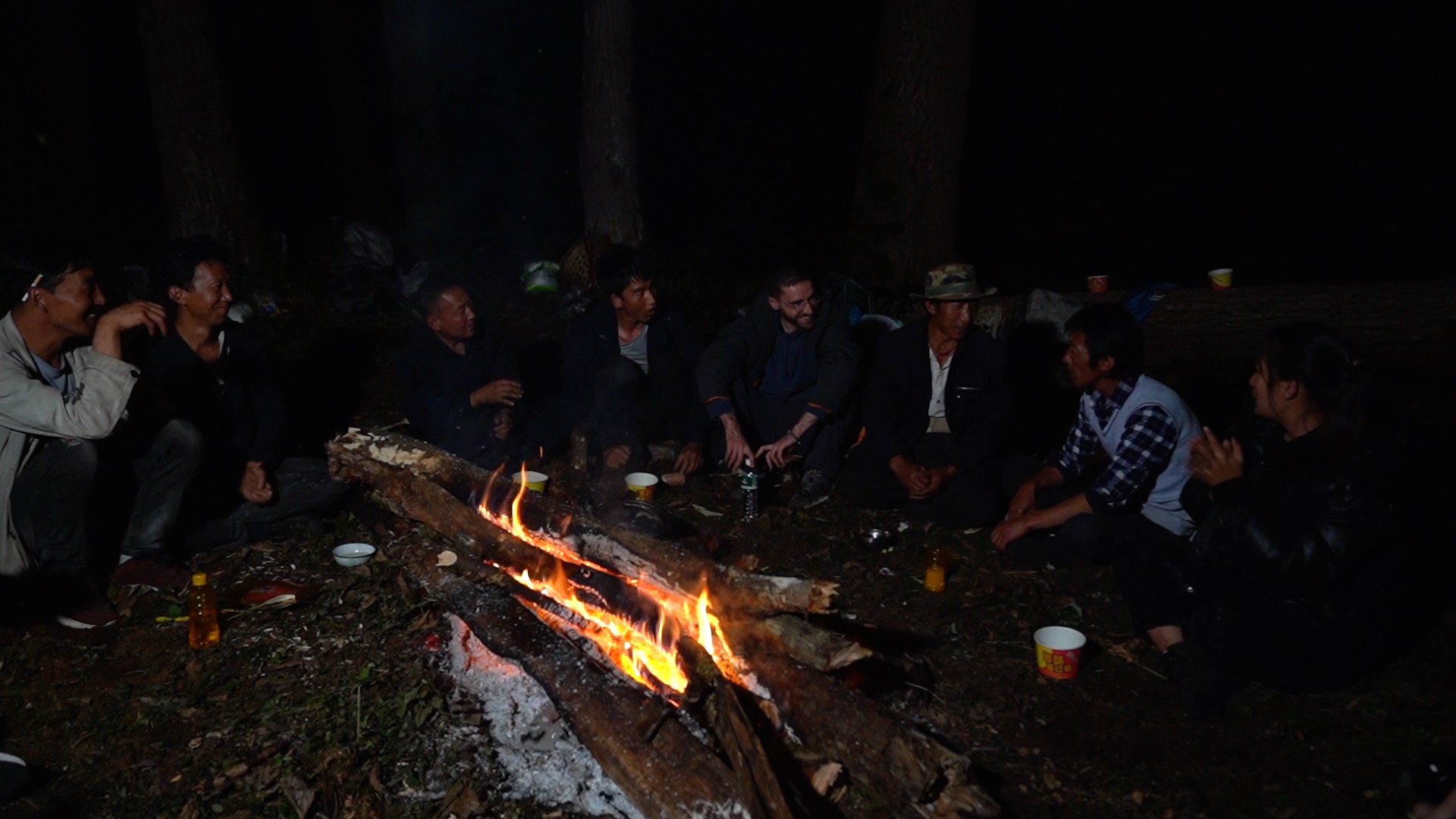 Around the campfire, forest rangers share their experience in the woods. /CGTN

Around the campfire, forest rangers share their experience in the woods. /CGTN

Such was the case of Wang Yu, the eldest of the pack – a man of quiet disposition whose old age affected his posture but not climbing skills. Over a spread of fruits and refreshments at his place in the nearby village of Cukatong upon our return to civilization, he spoke of hard times as a young man when money was short, and food scarce. Hunting was a lesser evil than starvation, despite going against the Buddhist tenets of compassion and respect for all living things.

In the early 1980s, when authorities began to look for local hires to patrol the surrounding forests, he jumped at the opportunity, turning a new page in life. But he wasn't willing to put the past behind, keeping three pairs of antlers affixed on a wall in the living room. "Why not throw them away?" I asked suspiciously. His answer came quickly, short but sharp. "So that I remember not to repeat the past," he said through Sanbu.

Close to 17,000 residents in Diqing Prefecture have been recruited as forest rangers between 2015 and 2019, earning a minimum of 8,000 yuan ($1,200) a year. The salary, buoyed by various subsidies and farming revenue, has helped poor households stand on their feet, authorities say. 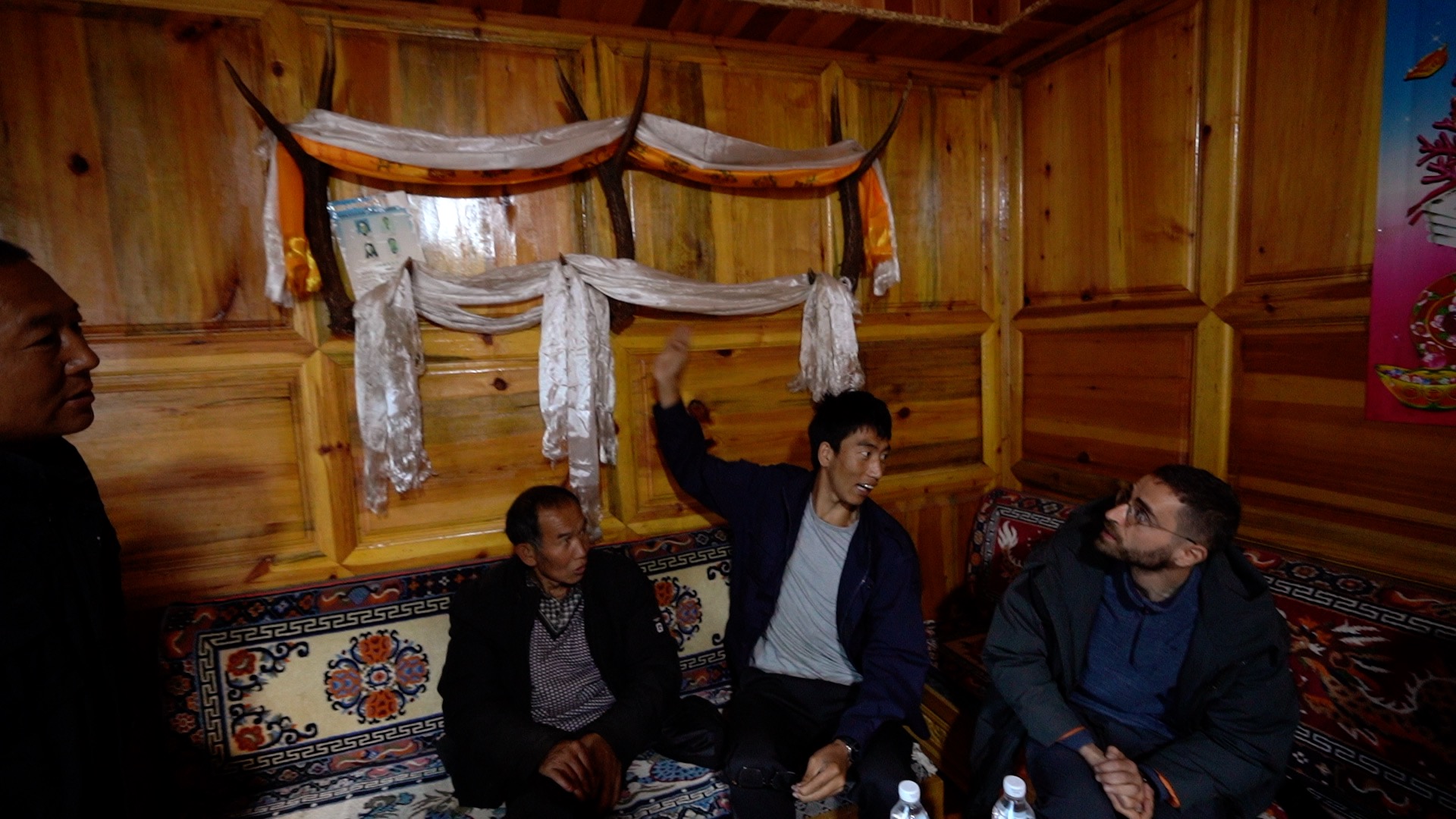 Officials here hope green living becomes a lifestyle. During an outdoor seminar I attended in Cukatong on a sunny afternoon, villagers listened to speakers explain the importance of preserving natural ecosystems and garbage sorting. Organizers drove home the point with giveaways: electric stoves and solar-powered water heaters – a nudge to deter locals from burning wood for heating, an enduring practice around these quarters.

Like other poverty alleviation officials I've met during trips to the poor countryside of China, Sanbu is in charge of several families, dealing intimately with their problems, be it financial or domestic. Among villagers, he's a family member, confidant and problem solver. By virtue of being his sidekick, I was welcomed into strangers' homes with inviting smiles and a smorgasbord of snacks.

During one house visit, I was guided to the back garden to be shown how herbal plants were being grown for Traditional Chinese Medicine (TCM) use – a lucrative enterprise, I was told, which locals could access thanks to technical training. In another location, a resettlement site at the foot of a mountain, every family was given a small plot of land, seeds and a crash course in farming. The greenhouses were teeming with cabbage, bundles of cilantro and strawberry plants that have yet to bear fruit. 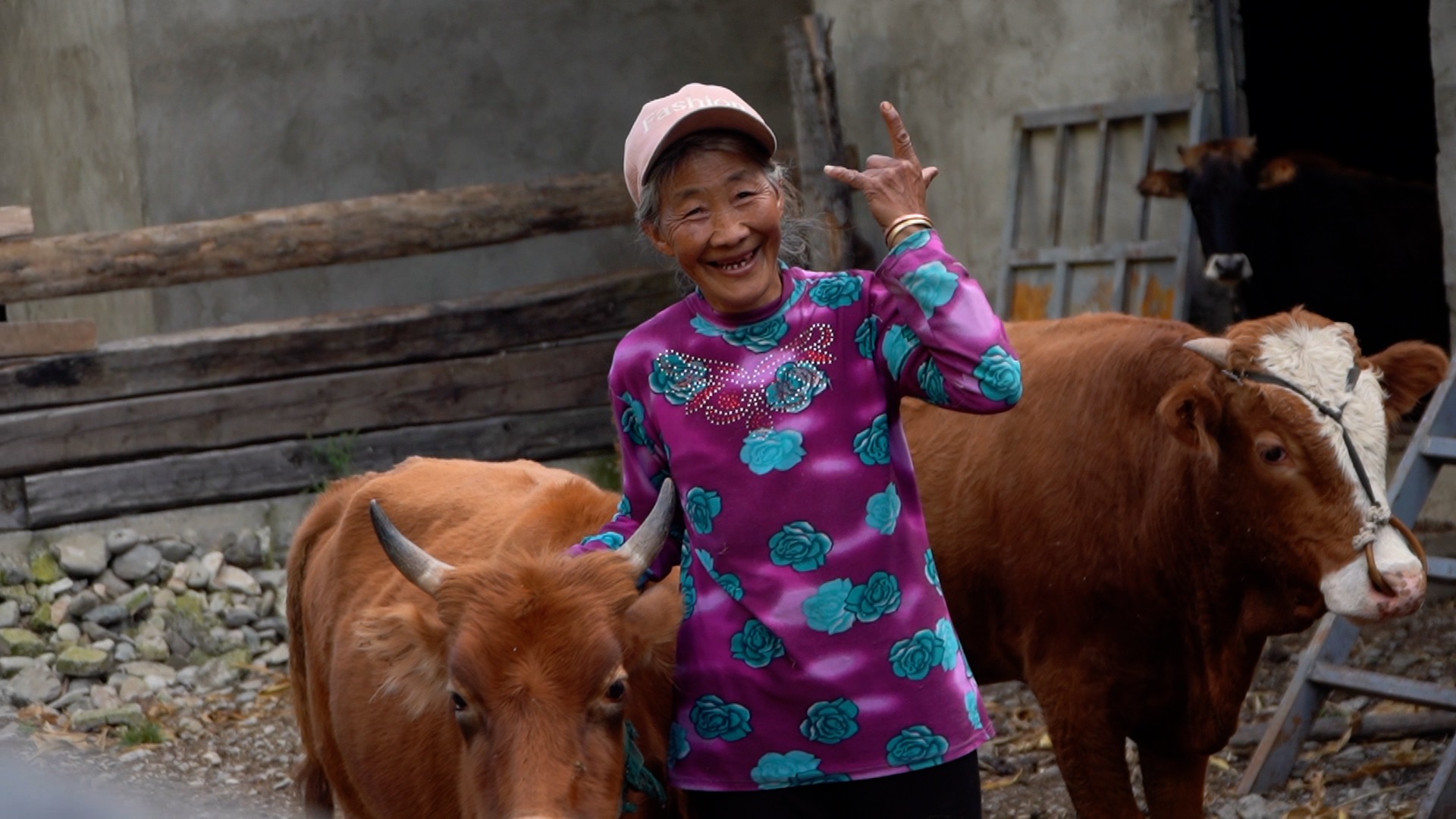 A villager smiles to the filming crew while herding her cows. /CGTN

A villager smiles to the filming crew while herding her cows. /CGTN

With more tools under their belt, villagers here have more chances of staying afloat. Different programs have given them the know-how on sustainable farming practices and techniques to boost productivity. Farmers have also diversified their crop varieties as Diqing developed industries around a number of produce like grapes, walnut, olive and pepper.

But when the experts can't come to the villagers, Sanbu and his colleagues visit the experts, laden with questions and in search of solutions. It was on one such mission to Tacheng in the neighboring Weixi County that my chaperon and I found ourselves among buzzing beehives. Our host was an apiculture ace who had the proficiency and patience to answer a slew of head-scratchers that beekeepers at home entrusted us with.

There, between the sweet bites of honey straight from the comb and the bitter stings of incensed bees, it all became clear: The forests, fields and falls of Diqing hold the key to good fortunes, but not when they're fragile. Residents here will forever be locked in a symbiotic dance with their surroundings. Their embrace was once suffocating, but now, in this idyllic haven, man and nature are growing together.