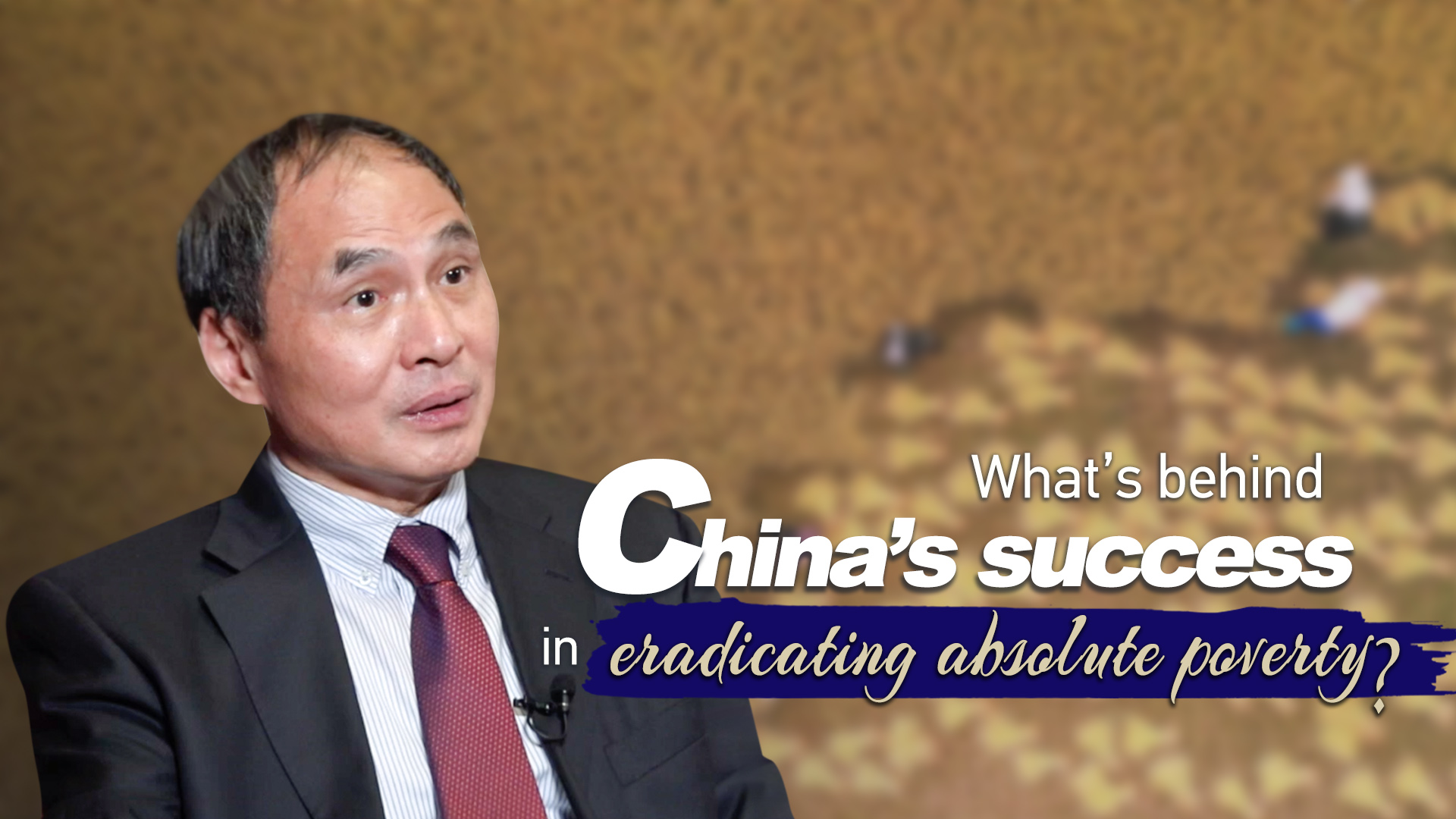 Editor's note: In 2020, China realized its goal of eradicating absolute poverty nationwide, which means that over the past 40 years, China has lifted around 800 million people out of poverty. How did China do it? And what's next for China's poverty alleviation efforts? Zheng Yongnian, dean of the Advanced Institute of Global and Contemporary China Studies at the Chinese University of Hong Kong, Shenzhen, shares his views on these questions. The views expressed in this video are his and not necessarily those of CGTN.

CGTN: China has eradicated extreme rural poverty this year. What is the significance of this achievement, and what do you think is the reason behind China's success?

Zheng Yongnian: China's poverty alleviation is a miracle in world economic history. Over the past 40 years, more than 800 million people have been lifted out of poverty. Since the 18th National Congress of the Communist Party of China (CPC) in 2012, more than 100 million people were lifted out of poverty in eight years. That is more than 10 million people a year. I think, be it 800 million in 40 years or 100 million in eight years, it is a miracle in world economic history. International organizations and many scholars have been studying what are keys to China's success in absolute poverty eradication. I think we can attribute it to the fact that both the government and the market have played a role in this process. In the West, market force is the main driver of poverty reduction, although governments also try to build a welfare state.

China has taken different approaches to poverty alleviation at different stages. In the early stage, we relied on the market, but it's getting increasingly hard to maintain this way. When it comes to"jingzhun (targeted) poverty alleviation," the government's role is essential. An effective government with a deep understanding of poverty is crucial.

Support from the general public is also very important. If the society is cooperative, policies will be effective. For example, this has been the case with the anti-corruption campaign. In places where the society shows no support, anti-corruption efforts prove difficult. Let's say that some people live under poor conditions in remote mountainous areas. They can be relocated under the government's plan if they are willing to. They emigrate from the poverty-stricken areas to places where the living conditions are better; this is good. But there were also cases where some old farmers moved back after relocation. So, there will be some problems if there is no social cooperation.

But in general, I think in the Chinese political system, the government plays a big role. Moreover, China clearly has strong institutional advantages (that have made absolute poverty eradication possible). For example, we were able to pair an underdeveloped place with an economically more advanced one and ask the latter to help the former. This approach cannot be found in other countries. You cannot imagine the New York state as a designated partner to help Alabama or any other state. It's also impossible to ask one state in India to help another.

On top of these policies of the central government, there are also provincial-level efforts. For example, Guangdong Province has helped many people in other provinces. It has been extending help to less-developed provinces and regions, such as Tibet, Xinjiang and Guizhou. It is hard to see this implemented in the West. So, we also have our institutional advantage. And we have more than one factor that has helped our poverty alleviation efforts, and these factors are systemic.

So, why are we carrying out a targeted poverty alleviation campaign in recent years? It is to eliminate absolute poverty nationwide, especially in rural areas. Because if a society has no basic social equality, it is going to run into problems. Over the past 40 years of reform and opening-up, we have achieved sustainability on two fronts. One is sustained economic development, and the other is sustained social stability. Many other societies achieved economic development, but their societies have become unstable. For example, the United States has benefited the most from this wave of globalization, but because of the government's inability to intervene in income distribution, it has gone from a middle-class society to a society dominated by the ultra-rich, where the social divide has become increasingly entrenched and the wealth gap widened, which has given rise to populism. So, again how can China alleviate absolute poverty? It's because of the ruling party's philosophy, the goal of common prosperity.

CGTN: What do you think of China's targeted poverty alleviation strategy? What are its advantages?

When I went to college in 1981, our per capita GDP was less than $300, and now the number is $10,000, so conditions have fundamentally changed. We have the ability to adopt the targeted approach now, and our institutions have enabled us to do so too. That's why we are successful. "Jingzhun poverty alleviation" is called "targeted poverty reduction" in English. It means we need to first identify the impoverished people, the ones that really need help, and then give the exact kind of help they need.

CGTN: Some critics are skeptical of China's poverty eradication efforts, claiming problems such as the poverty line is not scientific and too much red tape is involved. What do you think of these criticisms?

Zheng: When it comes to the implementation, we are doing well in some areas, but not so much in others. In some areas, there is a tendency of going through the motions. In others, there is less of this issue.

But if you see what happens around the world, there are certain things you have to do. Some people complain about China's official poverty line. Well, you have to have a standard to define poverty, right? Because you want to adopt a "targeted" approach, right? This is something that has to be done in the implementation period.

During the process, problems may arise. I think they are totally understandable. Problems are not particular to China's system. If you look at the problems associated with the welfare system in the West, the design of welfare state is well-intentioned, but it has also led to the misuse of the system. So, don't think any policy or any design is perfect. There is no such thing as perfection.

What we can do is to try to solve problems when they arise, right? We are doing a good job as long as problems are identified and solved. And there are some areas where we can really improve on, right? But no matter what we do, I think there will always be problems. It's normal, but it won't affect our commitment to poverty alleviation or our progress.

CGTN: You once said that we should not claim victory in our battle against poverty because there is not an end point to alleviating poverty. So, what should be our next focus?

Zheng: First of all, we should be aware that the goal of our targeted poverty alleviation campaign has been to eliminate absolute poverty. However, relative poverty remains a real issue in China. The definition of poverty is also changing. For example, the poverty line drawn by China has been changing with the times. So, is the poverty line determined by the international community. I think at the next stage, when you've eliminated absolute poverty, you need to shift the focus to relative poverty. Of course, you also need to look out for those relapsing into poverty. Once that happens, you have to lift them out of poverty again.

It's a challenge for any country in the world. Even the most developed countries have impoverished populations. There is not a society that doesn't have impoverished households, right? The key to solving the challenge lies in controlling absolute poverty and reducing relative poverty.

Now the outline of China's 14th Five-Year Plan objectives adopted by the Fifth Plenary Session of the 19th Central Committee of the CPC proposes to grow China's middle class, which is very important.

We now have 400 million middle-class people. If we have a middle class of 700 million people, after 10 to 15 years of development, then poverty will be easier to control, right? So again, this is a dynamic process.

Poverty exists in every society, and relative poverty is a perennial phenomenon. We can only claim a temporary victory in targeted poverty alleviation, not that we will have no more poverty in the future.