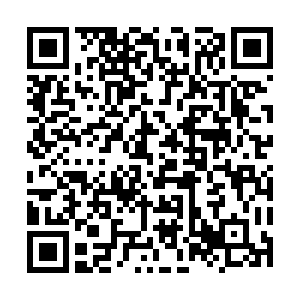 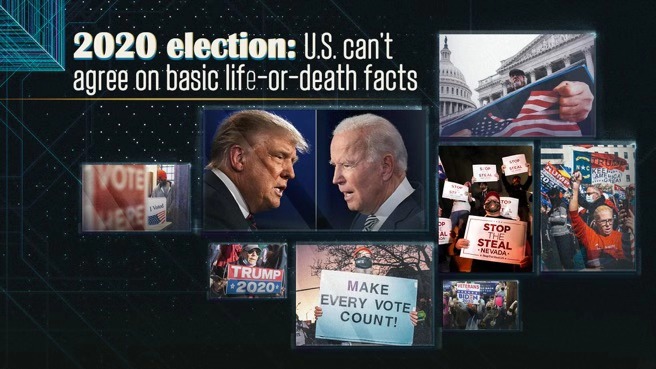 Editor's Note: Chris Hawke is a graduate of the Columbia Graduate School of Journalism and a journalist who has reported for over two decades from Beijing, New York, the United Nations, Tokyo, Bangkok, Islamabad and Kabul for AP, UPI, and CBS. The article reflects the author's opinions and not necessarily the views of CGTN.

Donald Trump is spending his days living in his own world, ignoring the COVID-19 pandemic and pressuring Republican officials to take part in magical schemes to reverse the results of the 2020 election. Trump may be in a different reality, but he's not alone. An unexpected number of Republicans are going along with the president for his trip down the rabbit hole.

According to a Fox News Poll released earlier this month, 36 percent of respondents believe Trump is the real winner of the election. Many Trump voters see him as one of the finest presidents ever.

Trump fueled a roaring stock market and high employment rates until the coronavirus pandemic hit. He cleared red tape and steered government funding to enable the development of a coronavirus vaccine in record time. He upheld religious values that are under attack, stood up to dangerous minorities seeking special privileges, and prevented urban violence and decadence from infecting the heartland of country.

For these voters, the presidency was stolen from Trump by massive voter fraud, and covered up by the corporate mainstream media and the deep state. And even if there wasn't massive voter fraud, Democrats never accepted Trump as a legitimate president, so why should Republicans accept Joe Biden?

Coastal elites tried to smear Trump from the beginning with the Russian scandal. A media and Justice Department coverup to hide the corruption of Hunter Biden and his father Joe altered the election results.

For some in this Red universe, Trump is an imperfect tool of divine providence sent to fight for the endangered religious values of evangelical Christians. For the more secular, Trump is a weapon with which to destroy a rotten system that labels people like them as "deplorables."

In a parallel urban Blue universe, Trump criminally mismanaged the pandemic and is responsible for hundreds of thousands of preventable deaths. He pandered to certain crowds of people to make sure his pro-corporate agenda was put in place. Trump lost the election by seven million votes fair and square.

This was confirmed by Trump's Attorney Bill Barr and his Cybersecurity, Infrastructure Security Agency chief Chris Krebs, and reinforced by a string of more than 50 losing lawsuits, including one rejected by the conservative-dominated Supreme Court.

In the Blue universe, any shady dealings by Hunter Biden are too insignificant to be worth examining in light of the shameless nepotism and conflict of interest on display with Trump and his children. 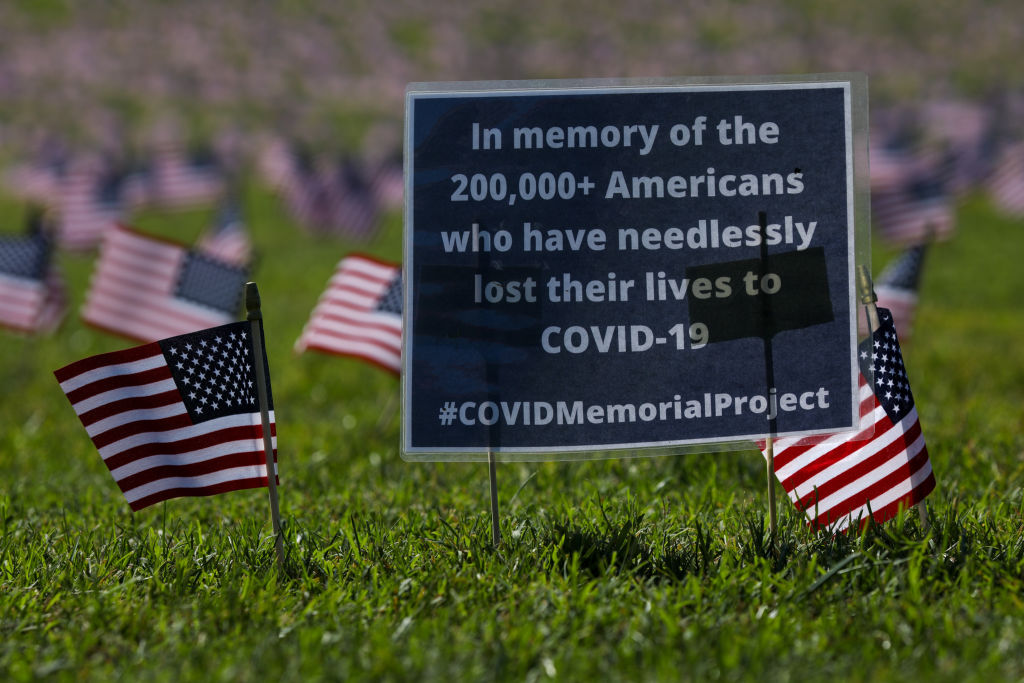 American flags were placed on the National Mall by the Covid Memorial Project in memory of the 200,000 Americans that have lost their lives due to the COVID-19 pandemic, in Washington, D.C., United States, September 22, 2020. /Getty

American flags were placed on the National Mall by the Covid Memorial Project in memory of the 200,000 Americans that have lost their lives due to the COVID-19 pandemic, in Washington, D.C., United States, September 22, 2020. /Getty

The split of the United States into two separate realities came into full bloom during the Trump era of "alternative facts," but has been building for decades. Journalist Matt Taibbi discusses this divide in his prescient 2008 book The Great Derangement. He notes that in 2006, only 45 percent of Americans were "very confident" that George Bush won the 2004 election fairly.

In the Red universe, "half the country believed in angels and the inerrancy of the Bible" and "the religious right increasingly saw satanic influences and signs of the upcoming apocalypse." In the Blue universe, a significant number of people believed that the U.S. administration conspired with the 9/11 attackers.

"Our national politics was doomed because voters were no longer debating one another using a commonly accepted set of facts," Taibbi wrote. He noted voters were acting "out of loathing, against enemies and against the system in general, not really for anybody," describing the Trump phenomenon perfectly eight years before it happened.

Biden won the 2020 election, but Republicans dominated in down-ticket races, giving neither party a clear mandate to govern. Voters did not clearly repudiate Trump's harsh immigration policies, support for the police in the face of the Black Lives Matter movement, or his dismissal of risks from climate change or COVID-19. The country remains as divided as ever.

Former Speaker of the House Newt Gingrich, in an opinion piece entitled Why I will not accept Joe Biden as president published earlier this month, said that the Left and Right "live in alternative worlds." He calls the Left's world "mostly the established world of the forces who have been dominant for most of my life." In contrast, he wrote, "My world is the populist rebellion which believes we are being destroyed, our liberties are being cancelled and our religions are under assault."

Trump on Wednesday tweeted out a link to Gingrich's opinion piece, commenting, "Newt Gingrich gets it, we are going to WIN!" Twitter attached a warning label to the message saying, "Election officials have certified Joe Biden as the winner of the U.S. presidential election." This label is proof to people in the Red universe that the system is stacked against them.

For now, there is no sign that America's competing realities can be reconciled. Is climate change real? Will wearing masks reduce the risk of catching COVID-19? In the U.S., these questions are unresolved. Instead of bringing the country together, the 2020 election has left America unable to agree on basic life-or-death facts.