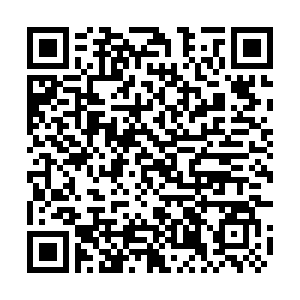 Editor's note: Thomas Zhang is head of Greater China Analysis at Uzabase. The article reflects the author's opinions, and not necessarily the views of CGTN.

Looking back in 2020, lots has happened in China's autonomous driving sector. Key national players have made remarkable progress that kept driving the sector forward despite the COVID-19 pandemic. This is a high-tech field where advancement of technology plays a decisive role. Commercially, the most notable application grown out of self-driving technology has been the so-called robotaxi.

Megacities like Shanghai, Beijing and Guangzhou are in the first line of cities to have accommodated robotaxi trials. Didi Chuxing and AutoX opted for Jiading District in Shanghai to carry out their trial rides, while Pony.ai went for the Nansha Development Zone of Guangzhou. Baidu and WeRide, on the other hand, did not bother too much and simply went for their headquarters.

Some in-person rides satisfied the curiosity of a few Uzabase analysts in the past few months, but only to some extent. Most of China's autonomous driving companies these days are working towards the so-called "Level 4" driving, defined as cars being able to drive themselves in geofenced metropolitan areas. Some experts simply put it "you won't really need a driver in Level 4."

As a result, the purpose of our test rides largely focused on to what degree can a human driver really let go of the steering wheel. The findings, it should be noted, are random and only reflect our own observations. Readers who have also taken such test rides may or may not reach similar conclusions.

Our first test ride was with Didi Chuxing, which has set up a reception center at the huge state-of-the-art Shanghai Automobile Exhibition Center, from where the ride started. A substantial part of the route was on a straight road, with a number of traffic lights throughout the driving.

There were two Didi staff members sitting in the front seats. The one behind the wheel was referred to as the "safety driver," while the other mainly served as a sort of client-facing guide, explaining everything to us along the way, such as the apparatus within the car and their functions, the technologies that Didi has adopted and why the car responded in certain ways under particular circumstances. 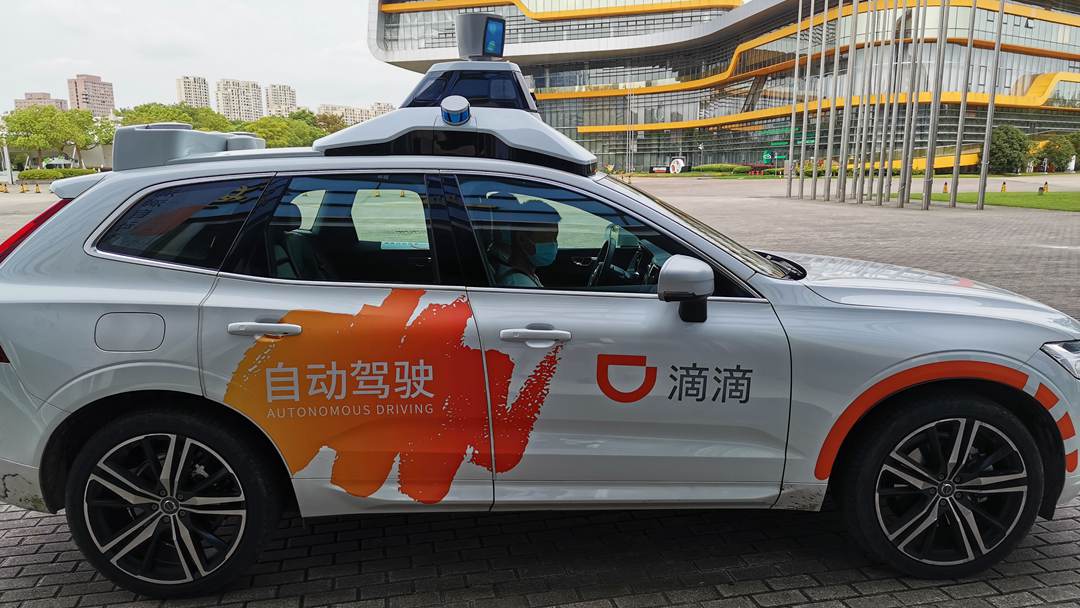 As we observed from the backseats, although the human driver had technically let go of the steering wheel, he wasn't really too relaxed. His hands, while off the wheel, were just a few centimeters away, in an apparent cautious pose to take back control of the wheel in case of emergency.

When the car made a turn, or changed lanes, the safety driver became even more attentive and extremely focused. On one occasion of crossing a traffic light, he took over by manually steering the wheel when a pedestrian suddenly appeared at the side of the zebra lines, hesitating over whether to cross the road.

AutoX operates in this same area too, so we test rode with AutoX immediately after riding with Didi. We used a special app on the mobile phone to hail an AutoX car, and it arrived within five minutes. It is also worth noting that the Jiading government designated several "pickup & drop-off spots" within the testing area, and robotaxis are only allowed to pull off at these spots.

Unlike his Didi counterpart, the "guide" on the AutoX car reminded us that he was not allowed to talk during the ride. The journey thus ended up with us silently observing the entire ride in a slightly awkward and bizarre way.

But we did notice that the human driver on AutoX's car appeared to be more relaxed than that of Didi, as he had both hands on his knees during the ride, even when the car was taking a turn. We also felt that AutoX's car performed relatively smoothly during slowing down and braking. At the end of the ride, the AutoX car dropped us off near a metro station, conveniently connecting us to the public transport.

A few days later, in Guangzhou, we test rode the robotaxi of Pony.ai, another leading autonomous driving startup in China. The testing ground was located in the Nansha Development Zone, where Pony.ai's office is located. It has secured a quite big area for its testing rides, and the road conditions were slightly more complicated than we experienced in Shanghai.

We first took a ride during daytime. Just like the human driver of AutoX, the one in the Pony.ai's car also had both hands resting on his knees, even when the wheel was making a big turn. Maneuvers such as taking turns and changing lanes were smooth.

Later that day, we had an opportunity to test Pony.ai's robotaxi in the evening, when daylight was completely gone, and the city was submerged in man-made lights. Unlike in the Jiading District, there are no designated areas for pickups and drop-offs spots in Nansha. The Pony.ai robotaxi that we hailed through a purpose-built app arrived at the front door of the restaurant where we had dinner.

There was only the safety driver in the front seats, enabling one of us to sit next to him to observe him from a closer range. As earlier, he also had both hands on his knees. The car was able to identify traffic around it and make decisions whether it needed to accelerate, slow down, change lanes or stop at red lights.

On the tablet screen that faces the passengers on the backseats, buildings on both sides of the road were quite conspicuously highlighted, as were pedestrians walking on the pavement. Until we arrived at our hotel, there was not once when the safety driver had to take over from the autonomous driving. 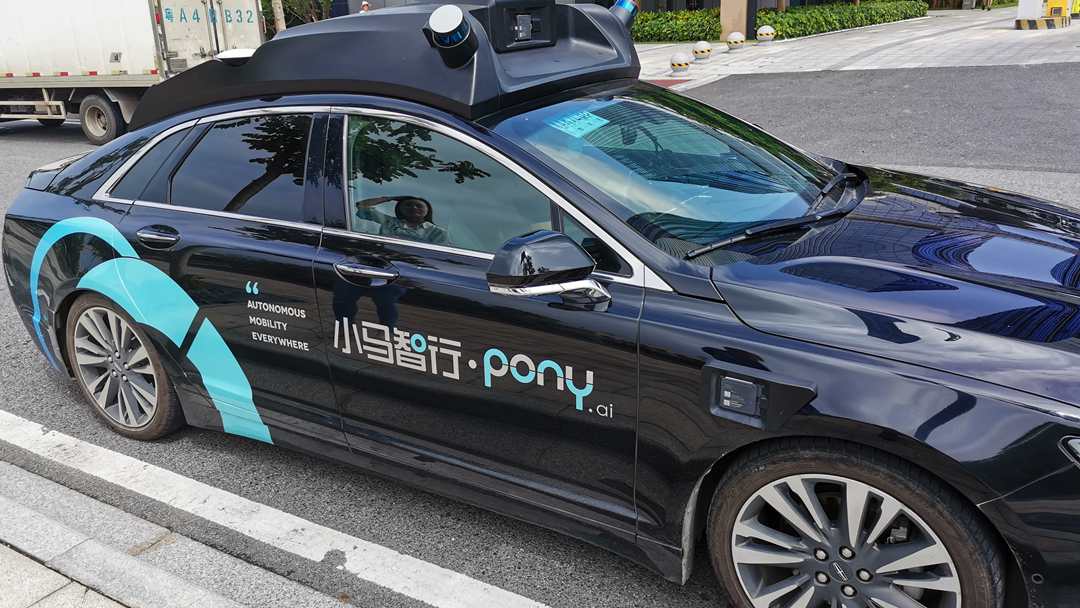 Shortly after our trial rides with Didi, AutoX and Pony.ai, it was announced that Baidu had opened its trial robotaxi services to the public in Beijing. There was some negative feedback about it circulating on social media in the first few days, unfortunately we are unable to make comments as we didn't get a chance to experience it for ourselves.

At the moment, all such self-driving trial rides on public roads across the country are enjoying explicit support from local governments, mostly in the form of specially assigned areas in the suburbs of a city.

Some also put up necessary hardware such as cameras and 5G hotspots along the roads to help autonomous driving firms develop their connected cars technologies, which in turn may serve as part of a smart city operation in the future.

With such ardent encouragement from the authority, top Chinese firms have achieved remarkable progress in the field of autonomous driving, and have become leading players in the world, are able to rival U.S. giants Waymo or Cruise.

On the other hand, it is also the authorities that are holding the reins in terms of exactly how fast this technology should be commercialized on a large scale.

While generously carving out large but geofenced areas for test drives, all local governments have stipulated that no autonomous driving cars can actually run on public roads without a human safety driver behind the wheel. This has effectively "killed" the dream of genuine "Level 4" autonomous driving in China, for now.

In early December, AutoX claimed to have deployed a fleet of 25 unmanned vehicles in downtown Shenzhen, only to see the local transportation management bureau issue a statement the following day stressing that the city had never permitted any completely unmanned vehicles to run on public roads.

Xiao Jianxiong, founder of AutoX, once said publicly in an interview that regulations are the only barrier for the commercialization of autonomous driving in China. He has been proven correct.

The ultimate consideration here, therefore the ultimate precondition for genuine "Level 4" autonomous driving, is apparently safety – for both traffic and pedestrians on the road. This is easier said than done, though.

Uber's fatal accident (in which its self-driving car killed a pedestrian in 2018) served as an unfortunate alarm to transportation regulators around the world, including those in China. It's thus unlikely that cautious regulators will allow Level 4 vehicles on public roads any time soon, because they are unsure whether current autonomous driving technologies are advanced enough to guarantee zero accident rate.

One may argue that even manned driving is not expected to be accident-free. But self-driving, blueprinted as one of the star technologies for the future, face much higher expectations from the public.

Any small signs of such technologies prone to accidents may damage the public's confidence in the prospects of commercialization, which in turn makes regulators even more cautious about granting the go-ahead.

The test rides are surely here to stay for an extended period of time. China is leading, and will continue to lead, in the technology advancement of autonomous driving. But large-scale commercialization is unlikely to come any time soon, for the exact reason put forward by Xiao Jianxiong of AutoX: regulations.