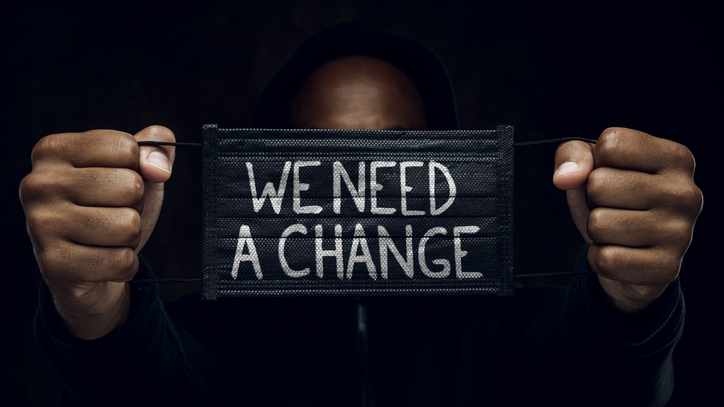 Racism has seemingly taken charge at numerous U.S. hospitals where medical professionals have turned a blind eye to Blacks and other minorities with COVID-19.

Just recently, Dr. Susan Moore, a practicing physician of color at Indiana University Health North Hospital, lost her battle to coronavirus two weeks after she called out a white male doctor for ignoring her health problems.

Prior to her demise, Moore shared a painful video on social media, voicing her concerns about her state of health and how she was grossly overlooked by a fellow physician, Dr. Eric Bannec.

"If I was white, I wouldn't have to go through that," said Moore as she lay in bed while recording the video. 'You're not even short of breath. I said yes, I am! He further stated, you should just go home right now. I don't feel comfortable giving you anymore narcotics. I was in so much pain from my neck. My neck hurt so bad. He made me feel like I was a drug addict, and he knew I was a physician," Moore added.

It is not only intellectually dishonest for a doctor to stereotype a Black woman with the social label of a "drug addict," but also extremely unprofessional to discredit her genuine concerns.

Bannec was fully aware that Susan was a physician but he made a conscious decision to avoid her. The late Susan Moore is just one case study of a broader American problem – systemic racism, which has its teeth sunk deep in U.S. history.

Earlier this year, when COVID-19 was relatively a new phenomenon, a registered nurse from a New York City hospital, Nicole Sirotek called out the staff and medical professionals at her workplace for intentionally taking lives of COVID-19 patients. A majority of these individuals were minorities.

The number of deaths by COVID-19 are higher in Blacks than whites.

According to an analysis by Brookings Institution, the mortality rate among Black Americans is 3.6 times higher than whites.

In another extensive study conducted by Health Affairs, Asian Americans, who constitute one-third of San Francisco's population, run a greater risk of losing their lives to the virus than the whole population in the area.

Due to insufficient healthcare coverage, underdeveloped neighborhoods and income disparities, African Americans have had to bear the brunt of many social inequalities.

Limited access to these socioeconomic benefits pose a greater threat to their health in the face of a pandemic. Furthermore, problems facing their community hardly translate into action-oriented policies, which can be attributed to higher COVID-19 statistics among Blacks. Since Donald Trump assumed office in 2016, racism has become more pronounced in a modern-day America. It is rhetoric like Trump's that has aggravated racism, and the COVID-19 – causing the Black community in the healthcare sector to experience an increase in discrimination.

Unless systemic racism, healthcare deficits and low-paying jobs are included in a broader policymaking discourse, Blacks would continue to suffer long-term. These key issues are interconnected.

According to Pew Research, 49 percent of American adults feel that Blacks lack access to healthcare facilities. Forty-five percent of them believe that they are required to work outdoors given the nature of their jobs.

Couple these issues with systemic racism in hospitals, and COVID-19 cases in the African American community would only rise in the months to come.

It is high time that the incoming Biden government recognizes that racism is gradually overpowering the healthcare sector of the United States during a pandemic. Minorities are losing their lives at a much faster rate.

Decades have gone by yet the African-American community is met with countless challenges that they should have outgrown by now. Very few constructive policies favor Blacks and other minority groups.

Why are policymakers so negligent of the problems facing African Americans? Why is there a lack of progress even after so many decades? The inability of legislators to perceive the hard-hitting realities says a lot about their disregard for African Americans.

It appears as if Blacks are reliving sour history considering major policy loopholes, and the Trump administration's inability to see the worth of African Americans during the last four years.