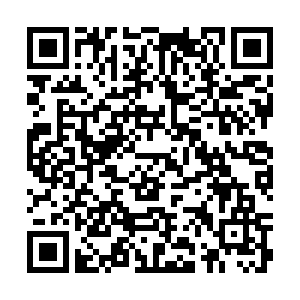 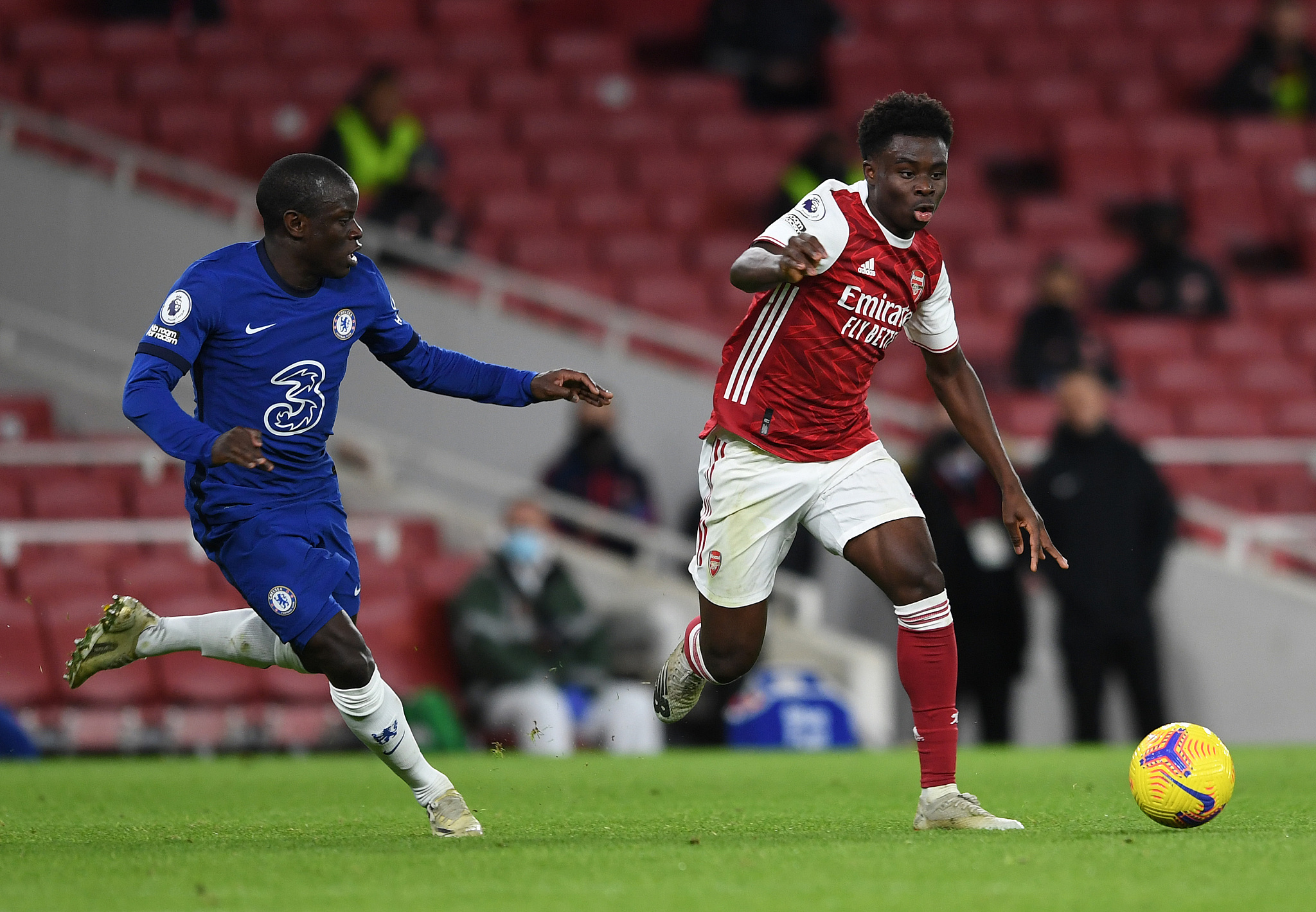 Bukayo Saka of Arsenal takes on N'Golo Kante of Chelsea during the Premier League match between Arsenal and Chelsea at Emirates Stadium in London, UK, December 26, 2020. /CFP

Bukayo Saka of Arsenal takes on N'Golo Kante of Chelsea during the Premier League match between Arsenal and Chelsea at Emirates Stadium in London, UK, December 26, 2020. /CFP

Arsenal eased fears of being dragged into a relegation battle with a stunning 3-1 win over Chelsea on Saturday, as Manchester United's Premier League title challenge stumbled after they conceded a late equalizer to draw 2-2 at Leicester.

Mikel Arteta led Arsenal to win the FA Cup the last time they faced Chelsea in August, but less than five months on, the Spaniard was under intense pressure after a run of one win in 10 league games.

Arteta had bemoaned his side's fortune in recent weeks, but the Gunners' luck turned on a night when he gave youngsters Gabriel Martinelli and Emile Smith Rowe the chance to shine in the absence of more experienced figures such as David Luiz, Willian and Pierre-Emerick Aubameyang.

Kieran Tierney won a soft penalty for a push by Reece James and Alexandre Lacazette slotted home the spot-kick to open the scoring on 34 minutes.

Granit Xhaka then answered his critics after being stupidly sent off in a 1-0 defeat to Burnley earlier this month with a brilliant free-kick to double Arsenal's lead just before half-time.

A third consecutive away defeat for Chelsea further damages their chances of competing for the title and there was no way back for Frank Lampard's men once Bukayo Saka chipped in off the inside of the post 11 minutes after the break.

Tammy Abraham did pull a goal back five minutes from time and Chelsea could have set up a grandstand finish in stoppage time, but Jorginho's penalty was saved by Bernd Leno.

Victory lifts Arsenal up to 14th, six points clear of the relegation zone, while Chelsea drop down to sixth on goal difference.

In earlier Boxing Day action, Manchester United missed out on equaling a Premier League record of 11 straight away wins as for once this season they paid for not finishing strongly.

Ole Gunnar Solskjaer's men had come from behind in each of their previous away league games this season, but twice went in front at the King Power Stadium through Marcus Rashford midway through the first half and Bruno Fernandes 11 minutes from time.

"One point is not the worst result but we are disappointed we didn't get away with three," said Solskjaer.

"We had loads of big chances and we could've finished it off. They are a very dangerous side." 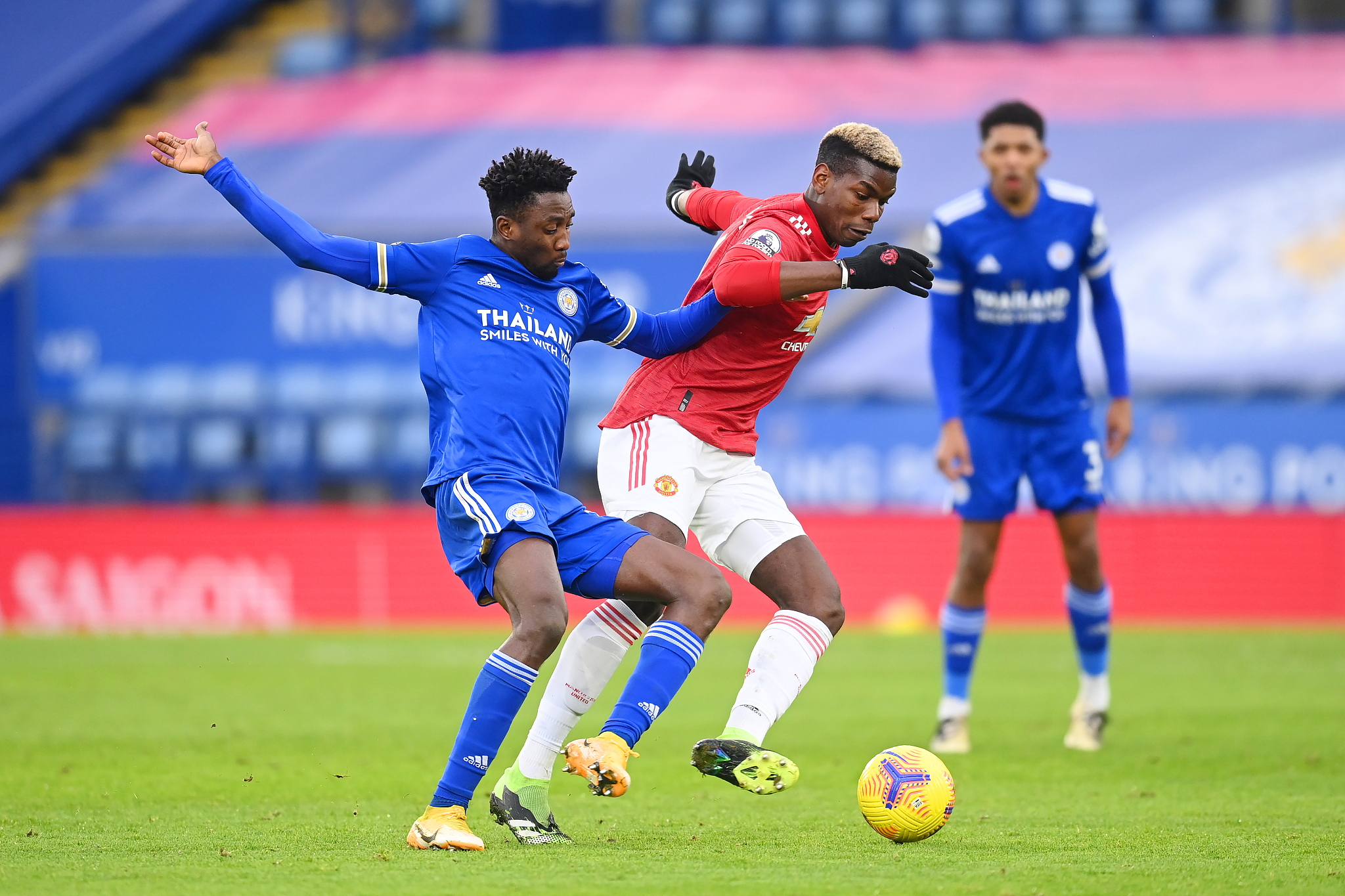 Harvey Barnes's blistering strike leveled for Leicester before half-time and United were undone by Jamie Vardy's movement in the box as the veteran striker latched onto Ayoze Perez's cross and saw his shot deflect in off the unfortunate Axel Tuanzebe.

"It's important for the development of us as a team and as a squad that we can come from behind against a really, really good side, a top side, and get the result," said Leicester Manager Brendan Rodgers.

A share of the spoils between the sides in second and third gives Everton the chance to move into second behind Merseyside rivals Liverpool when they visit winless Sheffield United later on Sunday.

Aston Villa are another unlikely challenger for the top four as they eased past Crystal Palace 3-0 despite playing the full second half a man down after Tryone Mings' red card.

A tussle between Mings and Wilfried Zaha resulted in a yellow card for both. Moments later Mings blocked off Zaha and the England international was dismissed in first-half stoppage time.

However, Villa soaked up the pressure and the 10 men extended their lead when Kortney Hause forced the ball home from close range after Watkins's header came off the bar.

Watkins also played a part in the third as he teed up Anwar El Ghazi to fire in off the far post for his fourth goal in four games.

Fulham edged to within a point of safety with a 0-0 draw at home with Southampton.

Twice the visitors were denied a late winner as Shane Long and Theo Walcott had efforts ruled out for offside.

Besides, Manchester City closed to within five points of Premier League leaders Liverpool as goals from Ilkay Gundogan and Ferran Torres saw off Newcastle 2-0 at a rain and windswept Etihad Stadium.