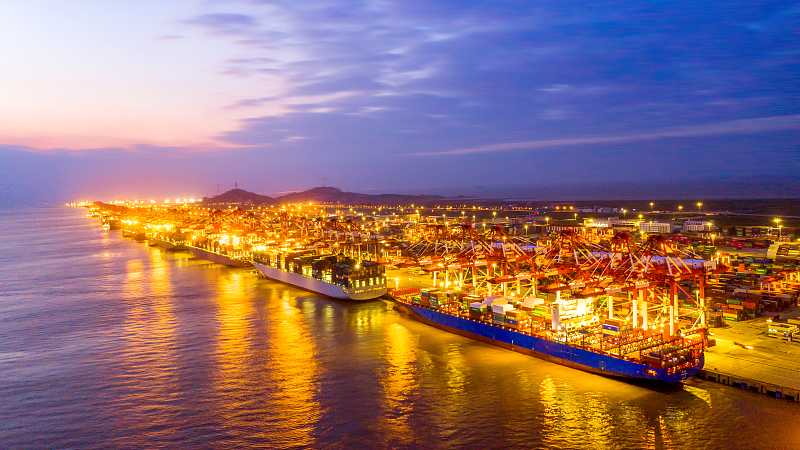 Editor's note: Azhar Azam works in a private organization as market and business analyst and writes about geopolitical issues and regional conflicts. The article reflects the author's opinions, and not necessarily the views of CGTN.

Over the last three decades, trade has been the cornerstone for pushing the global GDP. Globalization, which laid the foundation of modern prosperity by encouraging the manufacturing companies to globalize their production, drove global trade in GDP from about 39 percent in 1990 to more than 60 percent in 2019.

With Trump's trade war in 2020 threatening to upend the international trade system and U.S. and UK bans on Huawei likely to cost companies $3.5 trillion in the next five years to rebuild supply chains and deal with the rival techies, the crisis deepened by the pandemic will reverse the trend, dropping the ratio to 37 percent, the level seen at the end of Cold War.

International trade is the locomotive of global growth as well as a key driver to create jobs, reduce poverty and boost economic activity. Since 1990, it has increased global incomes by 24 percent and pulled more than 1 billion out of poverty due to economic growth underpinned by better trade practices.

The new wave of Globalization 4.0, where the digital economy is being translated into practice after maturing into prime mover of the global economy, expects the U.S. President-elect Joe Biden to thoroughly review and reform Donald Trump's nationalistic and protectionist trade policy that is closing off the global economies and strike a chord with world leaders to prevent a cliff-hanger situation.

While there would be a great debate in the coming years over who undermined global cooperation and growth more, Trump or the coronavirus, in 2020, it is far more vital for the new U.S. administration to bridge its trade differences with other economies and put joint efforts to strengthen multilateral trading system.

The outgoing U.S. president ripped off international trade rules and unilaterally imposed tariffs on hundreds of billions of Chinese goods. But the move adversely affected American importers and consumers that experienced the brunt of the costs, forcing them to pay more than $72 billion in duties as of December 17, according to the U.S. Customs and Border Protection.

In its latest press release, the World Trade Organization (WTO) said global trade rallied in the third quarter of 2020, showing an increase of 11.6 percent after falling by 12.7 percent for April-June. However, the global trade regulator warned the resurgence of the virus can take a toll on trade in the fourth quarter as cases spike across the world.

A logo stands on the wall outside the World Trade Organization (WTO) headquarters in Geneva, Switzerland, March 2, 2020. /Getty

A logo stands on the wall outside the World Trade Organization (WTO) headquarters in Geneva, Switzerland, March 2, 2020. /Getty

While the pandemic threatens to ravage global economic activity again, China's foreign trade (import and export combined) in goods notched 1.8 percent to 29.04 trillion yuan ($4.45 trillion) in the first 11 months of 2020 and is projected to reach at around 32 trillion yuan (about $4.9 trillion) for the full year.

China is the world's second-largest importer and holds a major share in global trade. As its imports surged 4.3 percent in the third quarter and are slowly catching up on last year's figures, the rebound in Chinese foreign trade will help stabilize the international market and stimulate the global supply chain, providing much-needed impetus to the global economy.

Kristalina Georgieva, managing director of the International Monetary Fund (IMF), in November said, "With the right mix of supportive macroeconomic policies focused on strengthening social safety nets and further key reforms, China will secure the recovery and ensure balanced and high-quality growth, which will benefit China and the world."

Her comments were echoed in the economic outlook of the Organization of Economic Cooperation and Development (OECD) released on December 1. It predicts global GDP will bounce back before gradually reaching pre-pandemic levels by the end of 2021, with China accounting for one-third of world economic expansion.

China is now the largest trading partner of more than 120 countries and regions. Where the new forecast emphasized China's key role in rescuing the pandemic-hit global ecosystem and marked its utility as a lead contributor to the global growth, it unleashes an opportunity for the international states to bolster trade ties with China and streamline their uneven economic recovery and mitigate financial risks by fulfilling the demand created by world's second biggest economy.

The IMF says China is set to leapfrog 56 countries in the world's per capita income rankings by 2025, putting it close to join the richest one-third economies whereas the UK-based Center for Economics and Business Research predicts China would overtake the U.S. by 2028 and become an upper-income economy during the current five-year plan (2020-25).

The ever-growing China's trade relations with almost two-third of the world's nations and its fast-paced economic recovery would embolden other countries that they, while prioritizing health and life of the people, can still make their economic progress by first protecting people and then through supporting growth.

From January 1, 2021, China will be lowering tariffs on 883 items and would further reduce duties under free trade agreements it has separately signed with countries in addition to the Asia-Pacific Free Trade Agreement. The lower than the most-favored-nation rates will open floodgates of imports to the exporters across Asia and beyond.

As the world fights the even-deadlier second wave of coronavirus, major economies should complement each other's growth rather than embroiling themselves into rivalries and trade disputes. The ongoing financial crisis cannot be reversed by one country alone, so the global leaders must step up efforts to strengthen cooperation and promote multilateralism, for which boosting international trade could be the first step to achieve harmony and buoy up global growth in 2021.