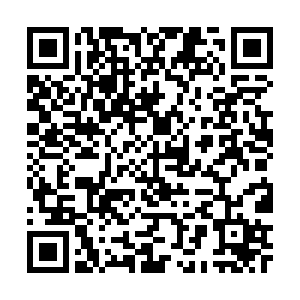 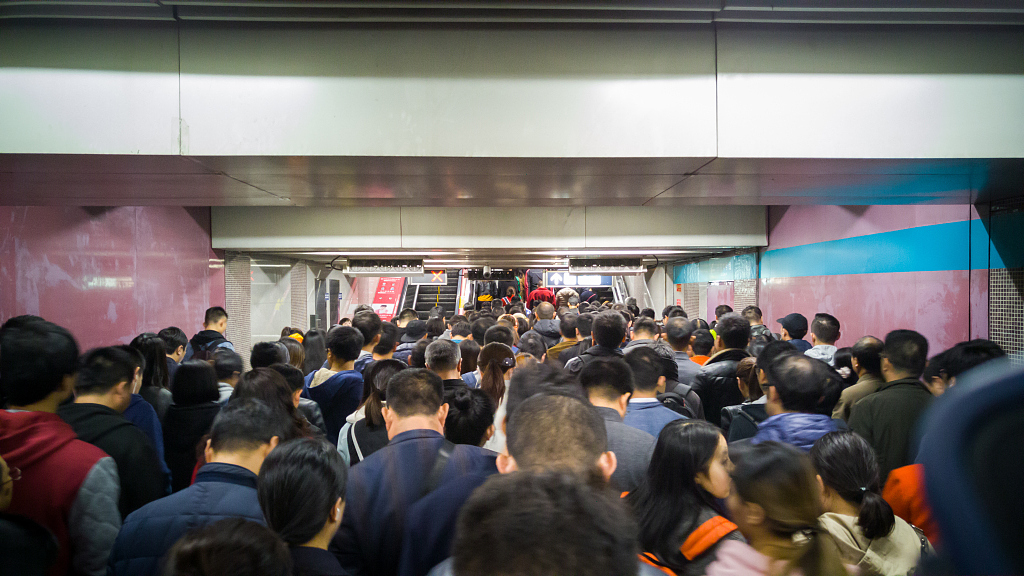 Commuters in a Beijing subway station on a typical day. /CFP

Commuters in a Beijing subway station on a typical day. /CFP

Until last week, Fu, a 34-year-old Beijing father, could not have thought that a regular day in his life would become the subject of nationwide conversations.

The resident of the Beijing suburb of Shunyi tested positive for COVID-19 last Wednesday, the first case detected in the latest flare-up of the epidemic in six months in the Chinese capital.

But it isn't Fu's positive status that has stirred emotions. As it emerged, the office worker commutes some 50 kilometers daily between his workplace and his suburban home, a 70-square-meter apartment which he shares with four family members. Besides work, grocery shopping and accompanying his two-year-old daughter to a daycare center, the young father spent the evenings studying for his graduate school exam.

On December 22, Fu took a coronavirus test as required to sit the exam, shortly before he flew to east China's Ningbo City on a business trip.

These details became public knowledge over the past week after his test result came back positive on December 23, while Fu was still out of town, three days before he was due to take his graduate school exam. The exam is now out of the question.

Between the lines of mundane details about Fu's hectic daily schedule, many people saw a life they could relate to. "He never had a chance to rest. All he did was going to work and looking after his kid," a netizen observed. 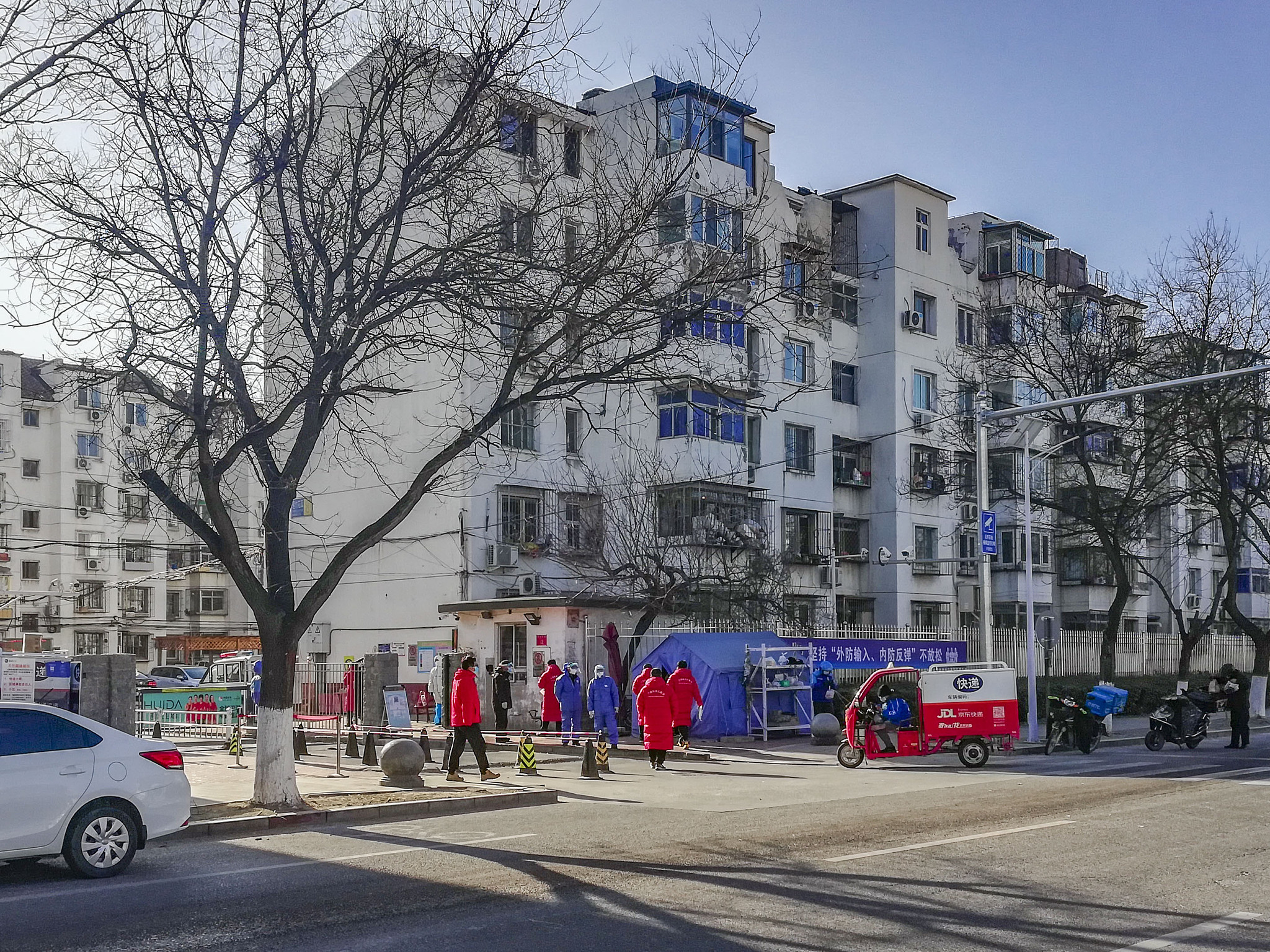 A residential compound in Beijing's Shunyi District is sealed off after new COVID-19 cases are reported in the area, December 24, 2020. /CFP

A residential compound in Beijing's Shunyi District is sealed off after new COVID-19 cases are reported in the area, December 24, 2020. /CFP

Within days, Beijing entered emergency response mode as several other confirmed cases surfaced. Among them is a 32-year-old woman working two jobs, with one starting at midnight and finishing at 2 a.m., and a 40-year-old ride-hailing driver who, on a regular day, spent 17 straight hours on the road, according to the patients' itineraries.

Another 31-year-old man, who was named a close contact and confirmed positive on Saturday, also holds down an additional night shift at a delivery transfer station after his day job while taking care of his wife, who had been injured in an accident.

"This is what real life looks like for an ordinary person," a netizen said, as internet users lamented the travails endured by millions of working men and women in Beijing, trying to piece together a stranger's life from the disclosed information.

Contact tracing experts now believe that Fu was infected while shopping at his local supermarket. With their shared identity as COVID-19 patients, unconnected individuals going about their own lives in the Chinese capital became uniformly known as "ordinary people".

However, it is not the first time the "ordinary people" had their personal life publicly examined after contracting the virus.

While it is unclear whether the Beijing residents' lives are as unexciting as their travel records suggest, one thing stood out about Fu and the other cases – their age, as the majority is in their 30s.

In China, being a 30-something often means a multitude of roles and responsibilities, like having a somewhat successful career, raising a child and caring for one's elderly parents. "Because they have elderly parents and young children to care for, any extra money they bring home means more assurance for their loved ones' well-being," opined a viral social media post about the hardship seen through Beijing's coronavirus cases.

Despite talks of hardship, Fu is widely thought to typify the vast majority of China's suburban middle class in first-tier cities, a group making up 11 percent of the country's population, according to a 2015 report by Zurich-based investment banking company Credit Suisse.

But this group, the largest and fastest-growing in the world, lack the level of security other countries' middle classes have, according to Li Chunlin from the Institute of Sociology at the Chinese Academy of Social Sciences (CASS). This is despite the fact that Chinese people are usually more capable of cushioning themselves from financial risks compared to people in other countries, Li noted.

According to a poll by the CASS in 2015, low income is only part of what makes Chinese urban residents anxious as most of them have to cope with prohibitive house prices, healthcare and education for their children. The study found that fewer than half of those earning over 300,000 yuan ($45,960) a year in China identify themselves as middle class.

The rapid growth of China's urban middle class in recent years has been accompanied by rising insecurity and anxiety, Li noted. While economic growth and socio-cultural changes have brought material comforts to this group, they are also dealing with increased pressure and confusion in the meantime. "Even if their material wealth puts them in the middle-class category, they do not feel secure," Li said.

"We feel bad for these people in Beijing, but in fact we are feeling bad for ourselves," a social media user named Fan Xiaoxi wrote. "If I get infected with COVID-19 tomorrow, my contact tracing itinerary would look exactly like theirs – just going between work and home."

"This is adult life."