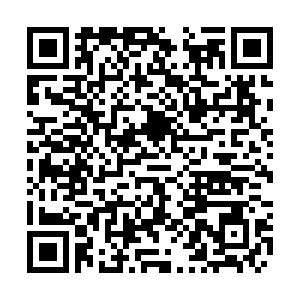 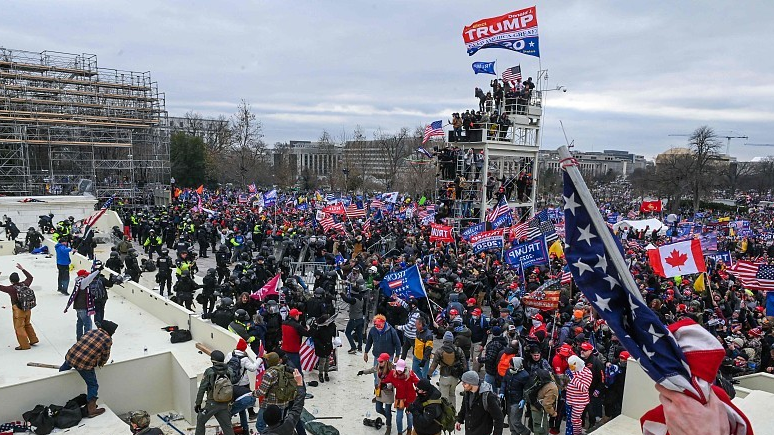 Donald Trump supporters clash with police and security forces as they invade the inauguration platform of the U.S. Capitol in Washington, DC, January 6, 2021. /VCG

Donald Trump supporters clash with police and security forces as they invade the inauguration platform of the U.S. Capitol in Washington, DC, January 6, 2021. /VCG

The Pandora's Box of "color revolutions" that America fatefully opened several decades ago has finally boomeranged back, with the proverbial chickens coming home to roost in Washington, D.C. after January 6's historically unprecedented unrest. Trump supporters stormed the U.S. Capitol as the climax of the outgoing President's "Save America March" after being riled up by the man himself just shortly before. U.S. President Donald Trump gave an hour-long speech to his supporters, who descended on the capital per his request to protest President-Elect Biden's confirmation by the Electoral College, in which he reminded them of his accusations of electoral fraud.

The president later tweeted that everyone should remain peaceful and abstain from violence, but his opponents argue that it was too little too late since some of his supporters had already stormed the U.S. Capitol. Whether he meant to or not, he seemingly incited the most radical among them with his words. In any case, the National Guard was authorized to quell the unrest, reportedly by Vice President Pence according to The New York Times. This very strongly implies that the Trump Administration wants to disassociate itself from what happened and sincerely didn't intend for everything to get out of control like it ultimately did. 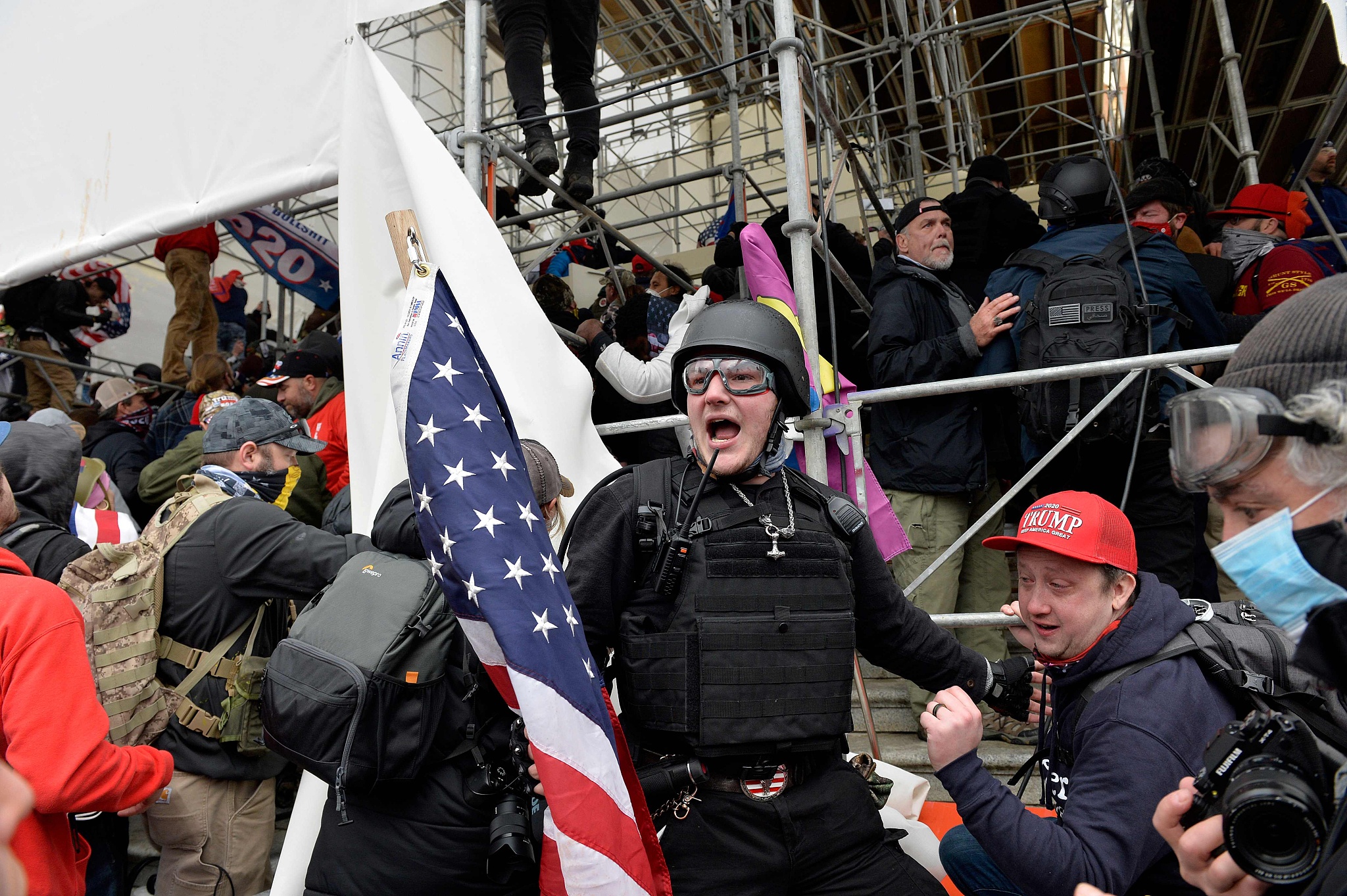 A man calls on people to raid the building as Trump supporters clash with police and security forces as they try to storm the U.S. Capitol building in Washington, D.C., U.S., January 6, 2021. /VCG

A man calls on people to raid the building as Trump supporters clash with police and security forces as they try to storm the U.S. Capitol building in Washington, D.C., U.S., January 6, 2021. /VCG

Pundits on both sides of the partisan divide will likely discuss this incident for years to come, but what few of them will mention is that it's actually the most high-profile example of "color revolution" technology being employed inside the U.S. itself. To explain, this term refers to the weaponization of people's protest movements for political ends, usually by external forces for the purpose of regime change. Nevertheless, as was seen on Wednesday in Washington, D.C., the creative utilization of crowd generating tactics and the strategic use of violence to popularize one's political agenda can just as easily happen at home as abroad, and organically too.

Tensions have been festering in the U.S. for quite a while now, but most thought that they already passed their peak after this summer's unrest driven at the time by Antifa and Black Lives Matter (BLM). That was a premature prediction. And now Trump's supporters sincerely believe that their unrest will help him stay in office beyond January 20.

In other words, the conservatives are doing so in pursuit of so-called regime reinforcement, which is the exact opposite goal. Inspired by the plethora of speculation on social media and alternative media outlets that Trump secretly has a "master plan" for overturning what they believe was the rigged election's results, they fell under the false impression that their political hero would endorse their actions. He didn't, however, which is why he called on them to respect the country's law enforcement officers and go home. 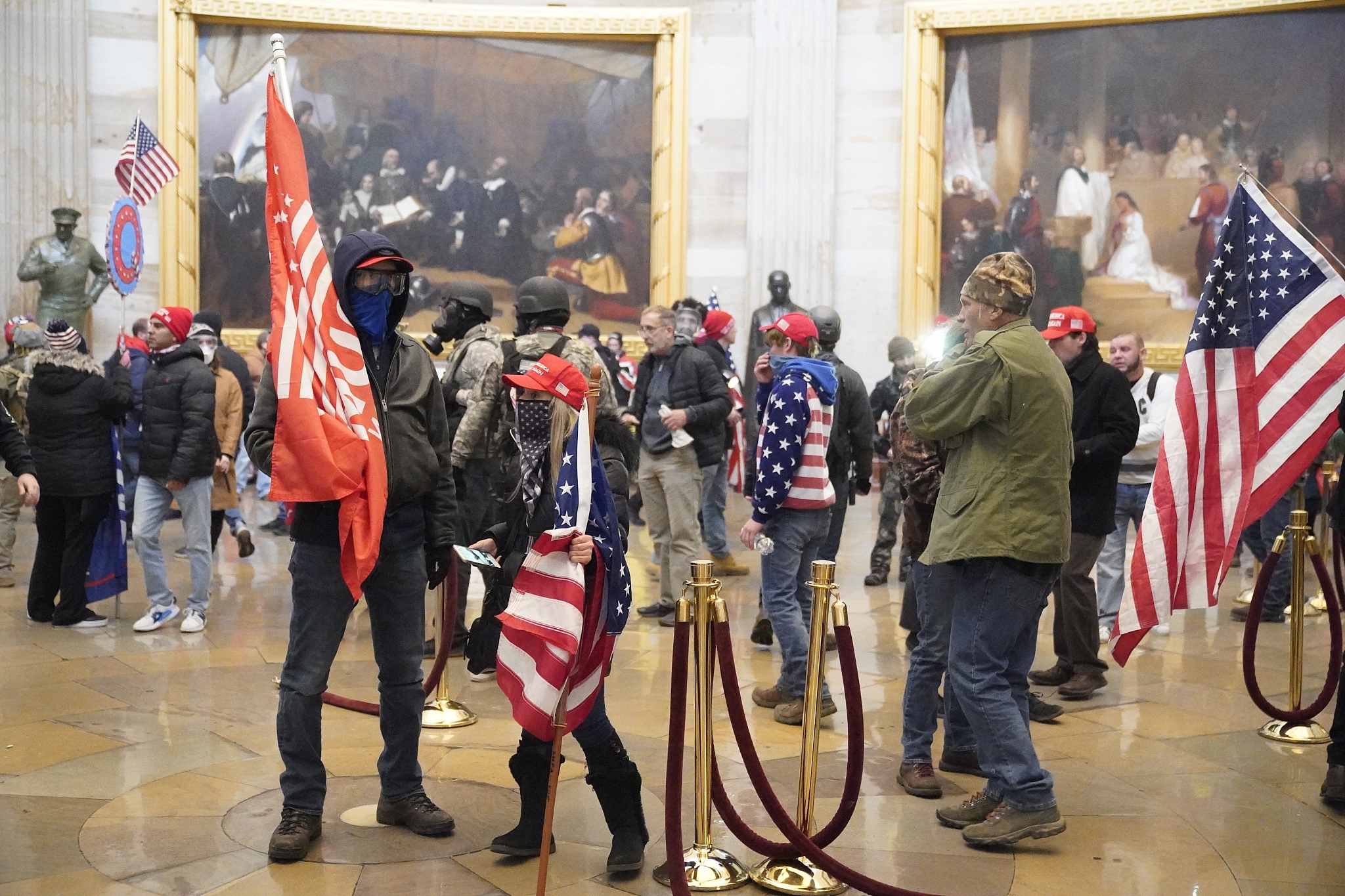 The red, white, and blue "color revolution" will therefore likely meet a swift end, one which is much quicker than the Antifa-BLM one. Although one can credibly argue that the latter inflicted much more physical damage on America over the past half year that it's been active, while it was only the radical conservatives who symbolically stormed the U.S. Capitol and succeeded in getting political figures on both sides of the aisle to unite against them. Antifa and BLM, it should be remembered, were tacitly and even sometimes outright supported by some Democrats at the local, state, and federal levels, thus hindering law enforcement operations against them.

Even so, however, there's no going back to how America was before January 6, 2021. Physical and psychological red lines were crossed beyond what anyone ever thought possible, and America should likely brace itself for more violence, even if it's only sporadic and less symbolic or intense than what happened on Wednesday. With radical Democrats and conservatives now employing "color revolution" technology against one another, there's no doubt that America has entered a new era of political crisis unlike anything that it's ever experienced before. It's unclear how it will all end, but it mustn't be forgotten that the U.S. itself invented the tactics that are now used.