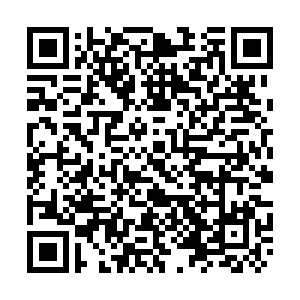 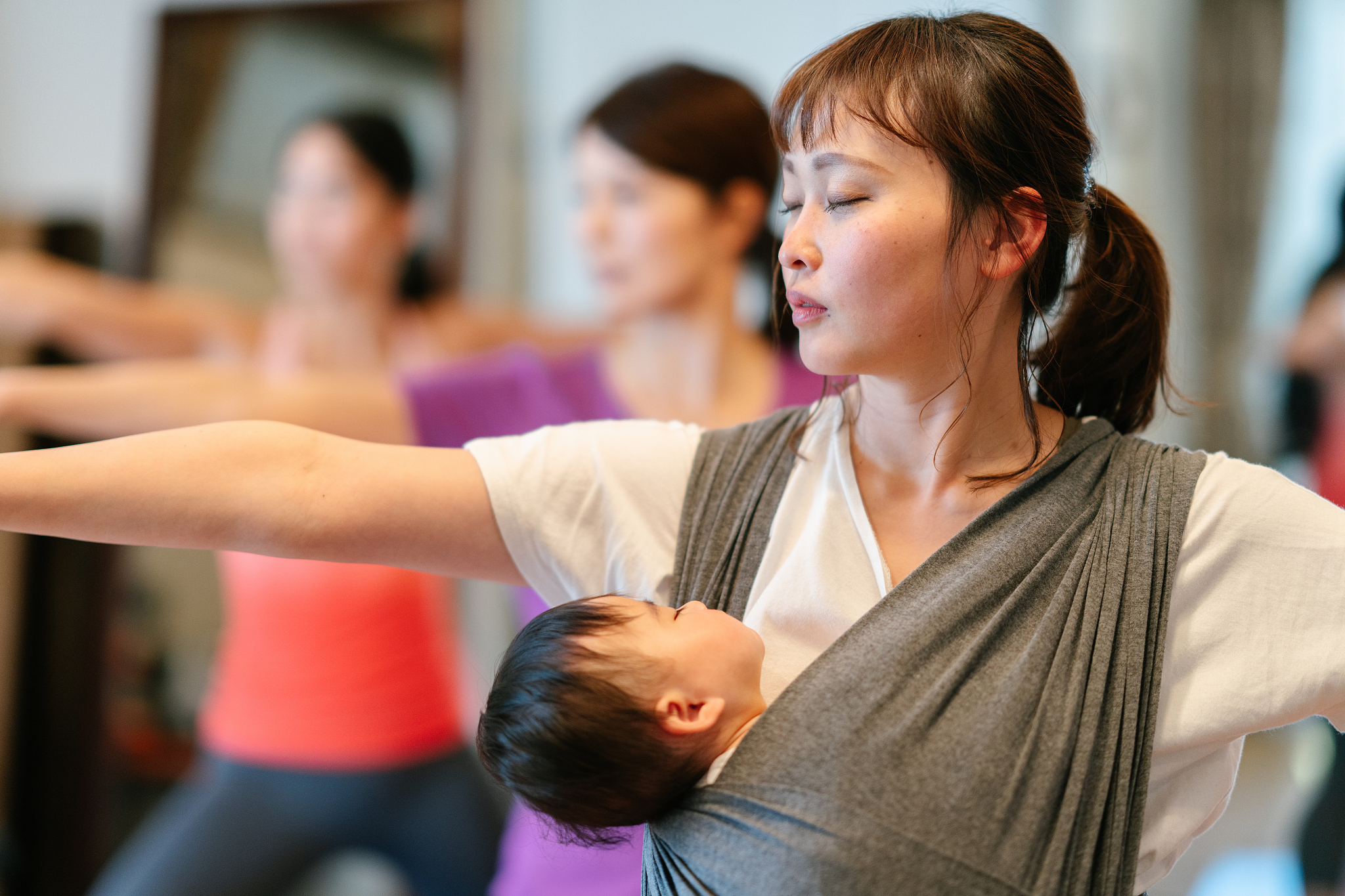 A mom does Yoga with her child cuddled into her bosom. /CFP

A mom does Yoga with her child cuddled into her bosom. /CFP

Four years ago, 46-year-old Sun Hongtao decided to have another baby as the country abolished the strict one-child policy. Before his 40-year-old wife gave birth to a daughter, he had never imagined that raising two kids could be so challenging, because as a middle-aged man, few people around him choose to have another child due to busy work schedule and limited physical vigor.

"Many of classmates' children either go to college or are already employed," Sun said. As a heart surgeon, his job is pretty busy and working extra hours is quite common. "Often I will be awakened by a call and have to run to the operating room in the middle of the night."

His wife also worked in a hospital. After maternity leave, she returned to her office, and often worked late at night.

"She is really tired. And we're very short of hands," Sun said. To take care of the baby, he tried to hire a babysitter, but none lived up to his expectations, and eventually they found one, but the woman quit after she visited her hometown in a Spring Festival, China's traditional lunar new year.

"So we decided to seek help from our parents. It's really embarrassing, because my father was already 80 years old and my mother was 77 years old. As of my wife's parents, her father has passed away and her mother was in her early seventies. They're pretty old, but we have to trouble them with our kids."

When asked if he had ever thought of seeking help from nurseries, he said at that time he never thought about it, because nobody around him sent their babies there and he doesn't think there was even a nursery in his neighborhood.

"If there were high quality baby-care institutes, I would consider sending my daughter there, which can reduce my wife and my parents' pressure and I can also focus on my job. That would be really convenient," Sun said. 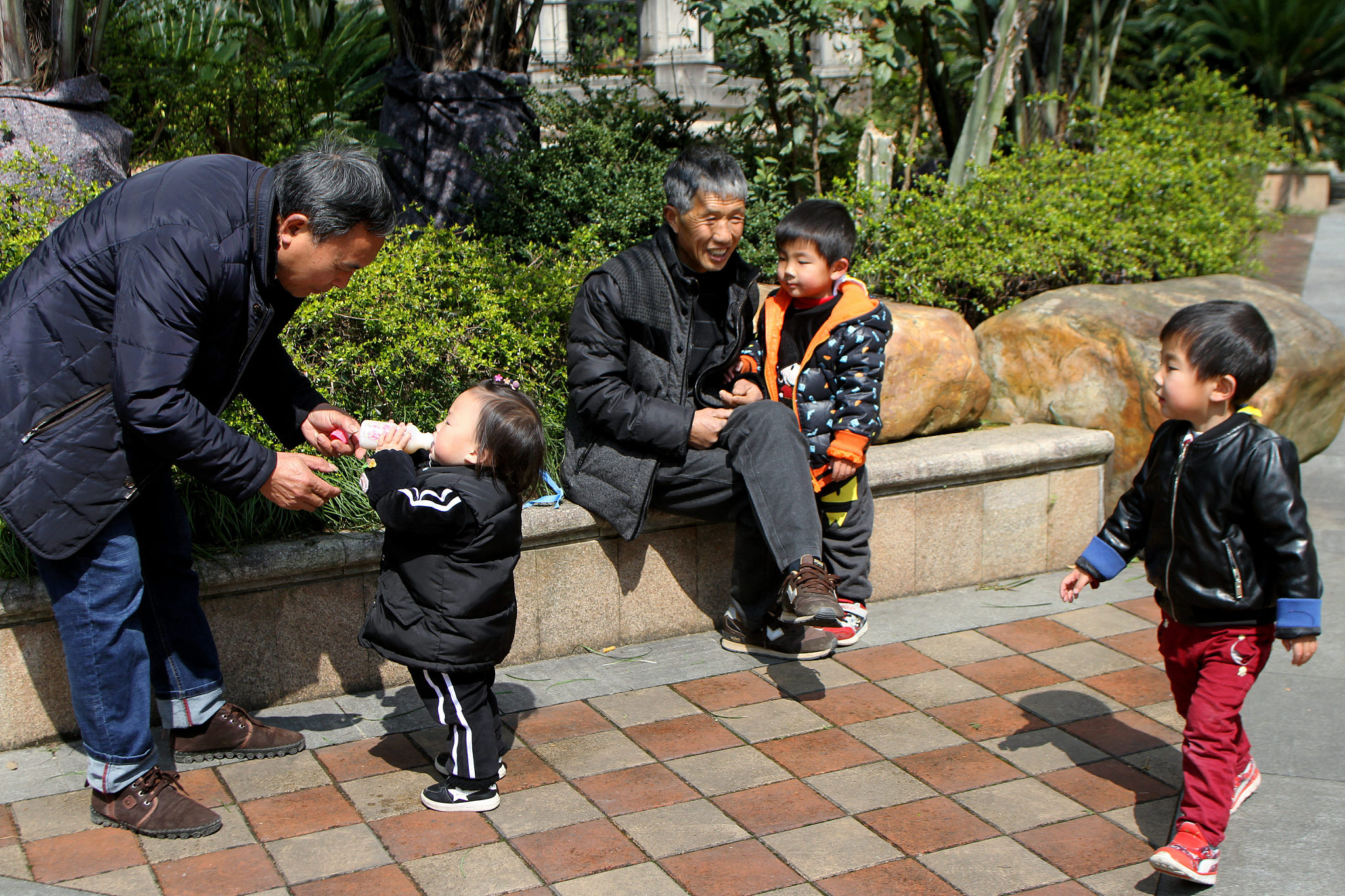 Two seniors take their grandchildren out to bask in the sun in a park in Jinhua City, eastern China's Zhejiang Province, March 14, 2017. /CFP

Two seniors take their grandchildren out to bask in the sun in a park in Jinhua City, eastern China's Zhejiang Province, March 14, 2017. /CFP

Though there are people like Sun who have grasped their last chance to have another baby, more and more young couples are seemingly reluctant to have a second child.

"It's expected that there will be a big increase in the birth rate after the abrogation of the one-child policy, but that didn't happen," Geng Xiaodong, a member of the Beijing Municipal People's Political Consultative Conference said. He said that young people now are the hardcore of work forces in the society and having one child has already exhausted them, two children may wear them out.

The city conducted a research in 2017, and the result shows that compared with 20 percent parents who want to have a second child, over 65 percent couples prefer to have only one. And in Shanghai, the number reached up to 80 percent. A major restraining factor is the lack of time and energy to take care of babies, while the second reason is financial burden.

In China, the average length of maternity leave for women is 124 days, while most kindergartens only accept children above three years old. So during the two and a half years before the child can go to school, families bear the burden to take care of their children. According to a 2016 study by the China Population and Development Research Center, among the families who have babies under the age of three, 69.7 percent of them hope to enroll their children to professional nurseries, while only 4.1 percent babies are enrolled due to the grave insufficiency in availability.

In countries of the Organization for Economic Cooperation and Development (OECD), official data in 2016 show that the average nursery enrollment rate of children under the age of three is 33.2 percent, and the rate in countries like Belgium, Iceland, France, Israel, the Netherlands and Norway reached nearly 60 percent.

For families, enrolling their children in nurseries is a big relief, but the insufficiency of such organizations and high price forced many to rely on the older generation in the family to take care of their children. Besides, many parents also have trouble trusting nurseries as cases of child abuse have been frequently reported in recent years.

Wang Xian, a mother who enrolled her two children - a three-year-old and a one-year-old - in a pre-school institute in Fuzhou City, south China's Fujian Province, said that both she and her husband need to work, so they have to find someone to take care of the two kids. But they have different opinions on child-raising from their parents, and hiring a babysitter is expensive, so they chose to send the two kids to nurseries.

It costs her more than 6,000 yuan($928) on her two children, which she thought is "expensive" but "worthy", because one of her friends works there, which, compared with other unfamiliar organizations, makes her feel assured that her children will not be mistreated. 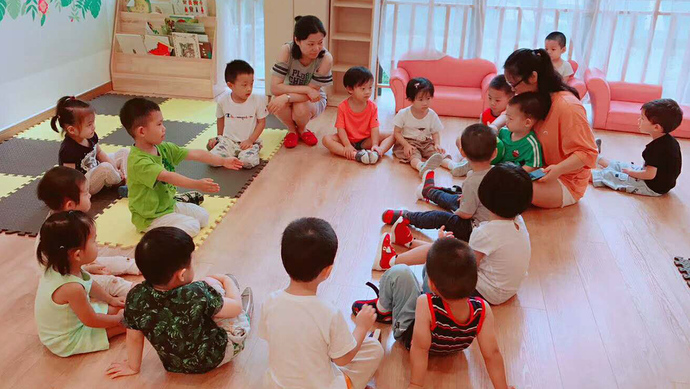 Children are playing in a nursery in east China's Shanghai. /Shanghai Observer

Children are playing in a nursery in east China's Shanghai. /Shanghai Observer

Policies are rolling out

As more and more young couples now delay birth schedules and are not willing to have more kids, China's fertility rate has been on a constant decline. According to Li Jiheng, China's civil affairs minister, China's total birth rate has hit the lowest level, falling below the warning line at 1.5.

Total birth rate measures the average number of children per woman. Globally, the average per woman is now below 2.5 children. Li warned that once the birth rate falls below 1.5, the country's population starts to contract, and there is little chance of recovering.

Taking Japan as an example, the country's birth rate dropped below 1.5 in 1995 and since then, despite various government efforts, the country just can't reverse the trend. In 2019, the number of births in Japan was down by 5.8 percent to around 865,000, the lowest annual figure ever, which former Prime Minister Shinzo Abe called it a "national crisis."

To encourage more people to have more babies, Chinese government in 2019 published guidelines to facilitate the development of nurseries. The paper by the State Council instructed local governments to build up a basic system of rules by 2020 to guide and regulate the nursery industry, and by 2025, all provinces should establish a well-rounded nursery system that provides high-quality and easily available nursery services for people.

Stimulated by this, local governments of municipalities like Beijing, Shanghai, and provinces like Guangdong, Fujian, Zhejiang, Liaoning, Shandong, and Sichuan have successively rolled out a variety of policies to support the development of the nursery industry and set time schedule to achieve the goal.

Shanghai in its Three-Year Action Plan for Nursery Service, promised that by the end of 2022, the coverage rate of universal child care centers in the city will reach to no less than 85 percent and more than half of the city's kindergartens will offer nursery service for parents. According to official data, as of May 2019, there were a total of 517 nurseries in the city, which can provide nursery service for about 24,000 people.

"In the one and a half years after the guideline was released, many nursery companies applied to the Ministry of Industry and Commerce to register to open their businesses. The number is three times as many as the total numbers of the past ten years," Yang Wenzhuang, an official of the National Health Commission said at a recent news briefing.