Download
How is snow made for the 2022 Winter Olympics?
Wei Lynn Tang 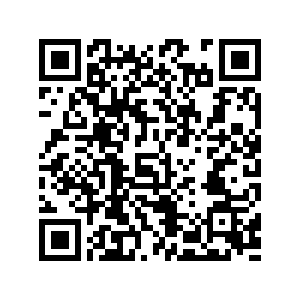 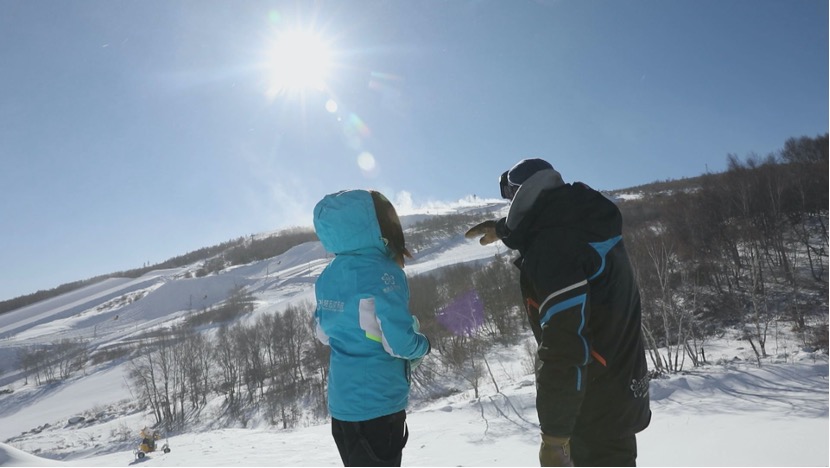 "We work in a really harsh environment. It's super cold, sometimes it's windy. Working here — you have to make it fun, so I try to always laugh and joke as much as possible, otherwise life is pretty difficult."

That's what Paul Lambert, a snowmaker from New Zealand, said to me when I pointed out his carefree and joyful vibe, despite us standing on the top of a mountain at minus 20 degrees Celsius.

And yes, you read that right — snowmaking is a job.

In fact, at minus 15 degrees or so, it's ideal for making (the most) snow, Lambert said.

Lambert works as a snowmaking manager at Genting Snow Park in Chongli District, Zhangjiakou, north China's Hebei Province — which will host freestyle skiing and snowboarding events for the 2022 Winter Olympics.

His work is at a critical stage now, where he has to ensure there is both enough snow and that the snow is "good enough" before test events for the games are held tentatively mid-February. 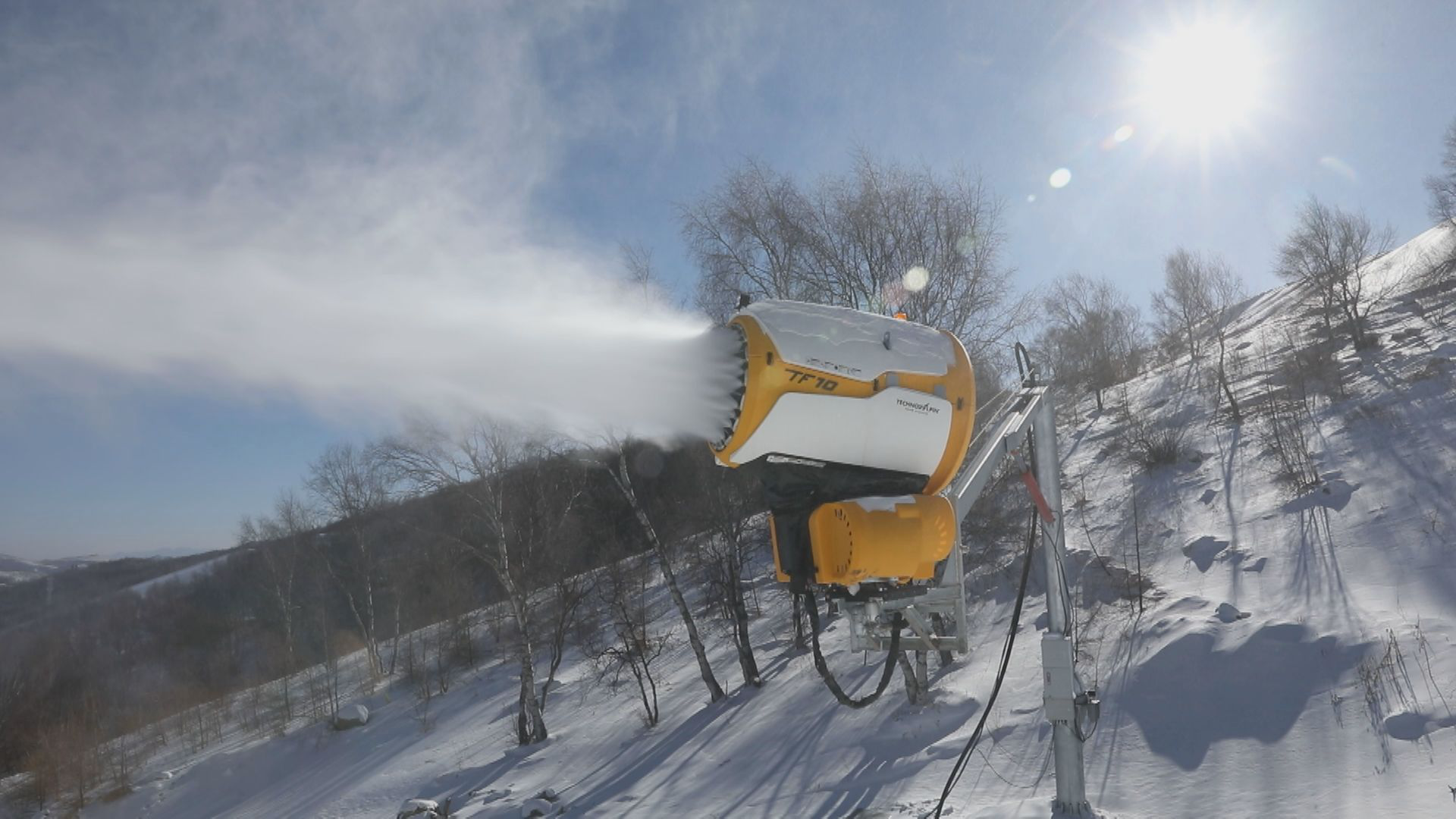 These snow guns are responsible for making most, if not all, of the snow at Genting Snow Park in Chongli District, Zhangjiakou, one of the key venues for the 2022 Winter Olympics. /CGTN

These snow guns are responsible for making most, if not all, of the snow at Genting Snow Park in Chongli District, Zhangjiakou, one of the key venues for the 2022 Winter Olympics. /CGTN

Nailing it all down simply

Snowmaking is basically the process of turning water into a little iced snow crystal that resembles a natural snow crystal, Lambert said.

"So we collect water in the reservoir, we push it out from pump stations — which is the heart of our system — at a high pressure onto the rest of the mountains through a network of pipes into these snow guns," he explained.

"These snow guns convert the water by splitting them up into the tinniest of particles with a combination of pressure air. The big turbine inside the guns then blasts the water out in the air. The longer the water is in the air, the chance it has of freezing and landing as iced crystal and snow crystal on the ground."

There are over 200 snow guns at the Genting Snow Park, Lambert said.

He added that these snow guns can produce between 18 to 50 cubic meters of snow every hour — depending on the different levels of temperature and volume of water.

I calculated: that essentially comes up to hundreds of kilograms of snow every minute!

For perspective, Lambert said the particular trail at the ski cross and boardercross site where we did one of our interviews (bless his patient self for taking on my dozens of questions under the brutal cold) needs 215-thousand cubic meters of snow.

"So this trail requires a lot of snow in order for us to build the slopes that people are going to ride on. This is by far requires the most snow. Some other slopes don't require as much, the half pipe only requires about 80,000 cubic meters of snow." 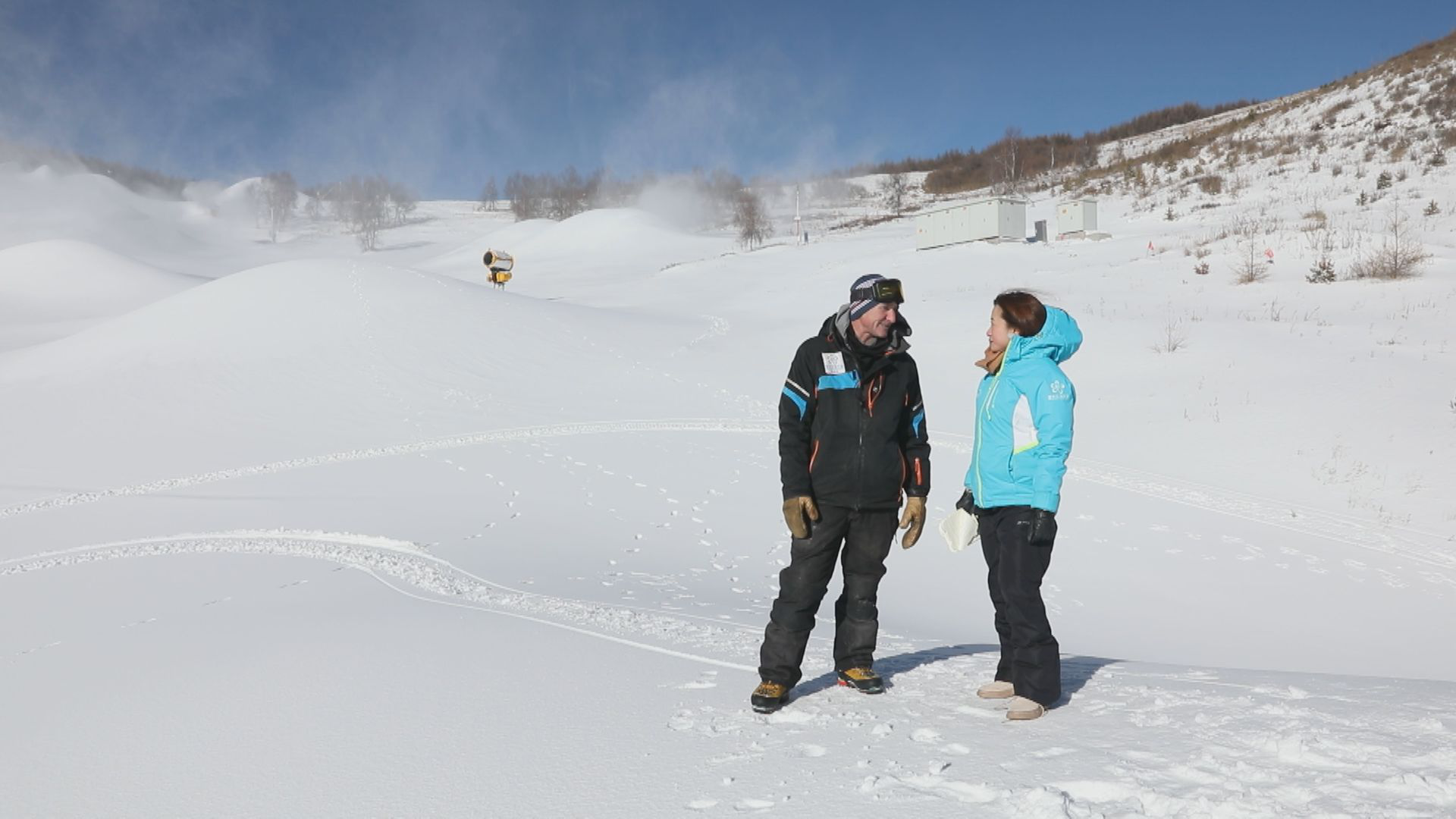 Paul Lambert, a seasoned snowmaker from New Zealand, explains to CGTN reporter Wei Lynn how snow is made. /CGTN

Paul Lambert, a seasoned snowmaker from New Zealand, explains to CGTN reporter Wei Lynn how snow is made. /CGTN

A snowmaking system monitors all parts of the snowmaking process, Lambert said.

From his computer in his office, Lambert said he can look at what's happening with the snow guns out on the hill.

"I can make adjustments to the direction they're [snow guns] pointing in, the vertical height or the amount of water that they're flowing, and the temperature at the guns. I can also look at our pump stations, see what pumps are operating, and what sort of water flow we have coming out and going onto the hill," he said.

"The automation allows us to get statistics about the snow that we've made, which is good for planning in the future. It helps us to manage our costs as well." 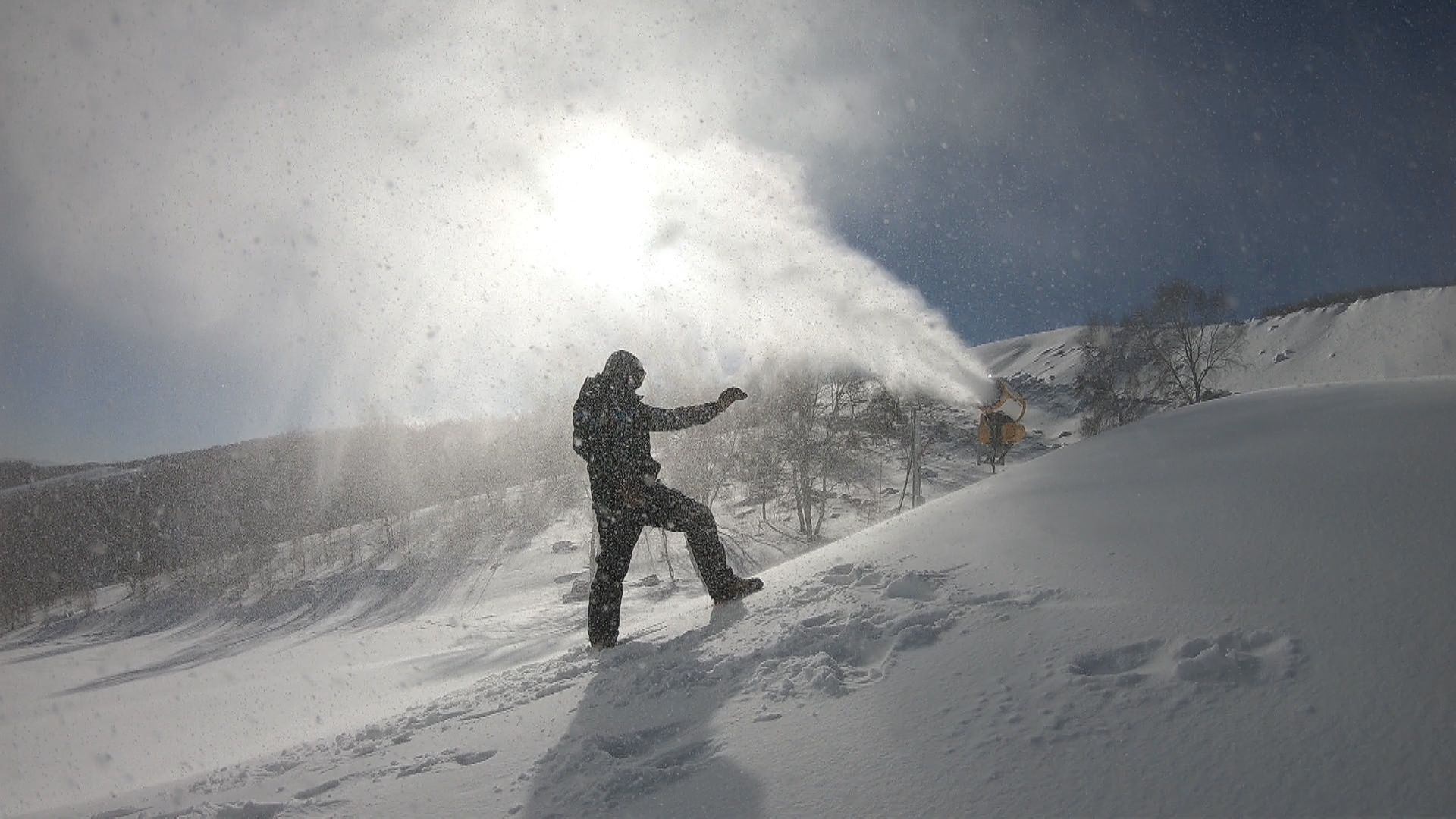 Despite the ease of automation, Lambert still goes out to the hills daily to check on the quality of the snow. /CGTN

Despite the ease of automation, Lambert still goes out to the hills daily to check on the quality of the snow. /CGTN

When asked if snowmakers will still be needed in the future, Lambert said "yes".

"With the automation we may require less staff in the future, but we still need snowmakers who are able to make sure that we're making snow in the right places, as computers can't tell exactly where the snow is going out on the hill and where we need it," he explained.

"Plus, having a bunch of automated machines out on the hill requires skilled technicians on how to repair them when something goes wrong. That's often the case in such a harsh environment like a mountain with water and snow everywhere."

How is making snow in China different from other parts of the world?

Lambert started making snow in New Zealand on the smallest of ski areas. "And since 1995 I've worked all around the world — from Australia to Europe, to America and Canada. And now I'm in China."

"Here in China it's colder consistently than in other places, and when it gets to winter it gets to minus 15 degrees Celsius and it can stay like that for weeks and months. Where as in other parts of the world the temperature can fluctuate a lot more, so we are really lucky here — we get cold, consistent temperatures which are amazing for making snow," he said.

While it's a lot easier to make good quality snow in China because it's colder, Lambert said the cold also brings with it different challenges.

"Because it's so cold it's very hard on the equipment. The snowmaking system is basically a network of computerized machines and being out in the cold is not always that great for computers." 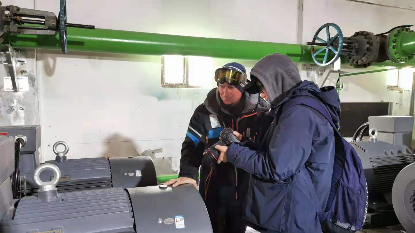 Water pumps are the heart of the snowmaking system, Lambert said. /CGTN

Water pumps are the heart of the snowmaking system, Lambert said. /CGTN

To which I asked Lambert, what gives him the most fulfillment in his work?

"Look where we are — we are in a beautiful place to work. How can you not enjoy coming out everyday and working here?" he said.

"For me, the challenge of taking the mountain from somewhere ... like this was grass and completely empty a few weeks ago, and in another few weeks there will be people here laughing and smiling, and skiing and having fun; and for me that's really satisfying."

And when I asked what is needed to be a good snowmaker?

He said: "You need to be able to handle the cold, you have to be enthusiastic about making good snow for the skiers, and you have to really want to learn all the time, and be constantly looking to understand new things."