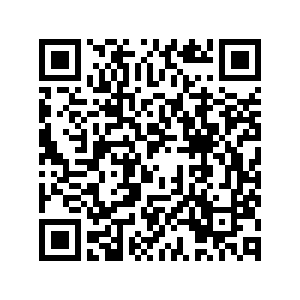 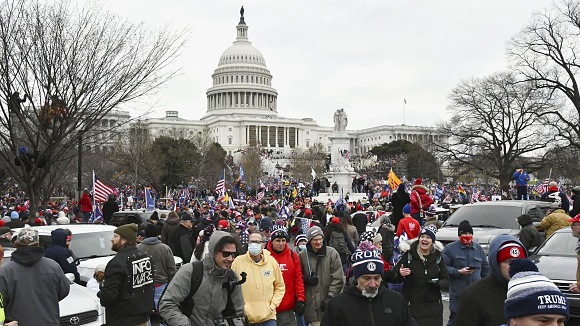 A mob loyal to U.S. President Donald Trump gathers near the U.S. Capitol in Washington on January 6, 2021. /Getty

A mob loyal to U.S. President Donald Trump gathers near the U.S. Capitol in Washington on January 6, 2021. /Getty

The storming of the U.S. Capitol on January 6 is easily misunderstood. Shaken by the ordeal, members of Congress have issued statements explaining that America is a nation of laws, not mobs. The implication is that the disruption incited by President Donald Trump is something new. It is not. The United States has a long history of mob violence stoked by white politicians in the service of rich white Americans. What was unusual this time is that the white mob turned on the white politicians, rather than the people of color who are usually the victims.

Of course, the circumstance of this rioting is crucial. The aim was to intimidate Congress into stopping the peaceful transition of power. This is sedition, and in stoking it, Trump has committed a capital offense.

In the past, such mob violence has been aimed at more traditional targets of white hate: African-Americans trying to vote or desegregate buses, housing, lunch counters, and schools; Native Americans trying to protect their hunting lands and natural resources; Mexican farmworkers demanding occupational safety; the Chinese immigrant laborers who previously built the railways and worked the mines. These groups were the targets of mob violence stoked by Americans from President Andrew Jackson and the frontiersman Kit Carson in the nineteenth century to Alabama Governor George Wallace in the twentieth.

Viewed in this historical light, the mob of righteously indignant "good old boys" who stormed the Capitol had a familiar appearance. As Trump put it in his speech fomenting the riot, they were out to "save" America. "Let the weak [politicians] get out. This is a time for strength," he declared, deploying familiar riffs. "They also want to indoctrinate your children in school by teaching them things that aren't so. They want to indoctrinate your children. It's all part of the comprehensive assault on our democracy."

Throughout American history, most mob violence has come not as a spasmodic explosion of protest from below, but rather as structural violence from above, instigated by white politicians preying on the fears, hatreds, and ignorance of the white underclass. As the historian Heather Cox Richardson documents in her brilliant new book, How the South Won the Civil War, this variety of mob violence has been a critical part of upper-class white America's defense of a hierarchical society for more than 150 years.

America's culture of white mob violence goes hand in hand with its gun culture. The hundreds of millions of privately owned firearms in the U.S. disproportionately belong to whites; and as the historian Roxanne Dunbar-Ortiz points out powerfully in Loaded: A Disarming History of the Second Amendment, "gun rights" have long been invoked by vigilante white mobs to suppress blacks and Native Americans.

Stoking mob violence against people of color is typically how rich whites channel poor whites' grievances away from themselves. Far from being a specifically Trumpian tactic, it is the oldest trick in the American political playbook. Want to pass a regressive tax cut for the rich? Just tell economically struggling whites that blacks, Muslims, and immigrants are coming to impose socialism. 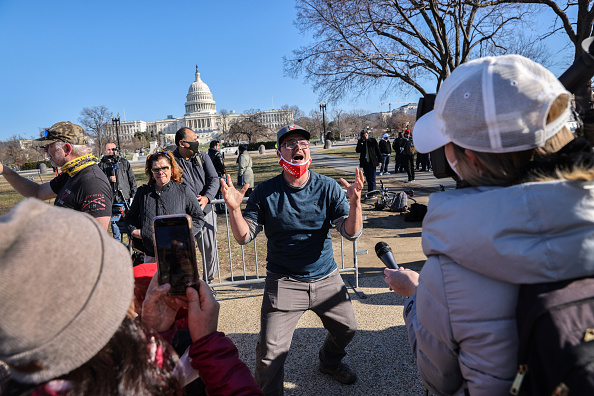 A Trump supporter complains of election fraud outside the U.S. Capitol on January 7, 2021, in Washington, DC. /Getty

A Trump supporter complains of election fraud outside the U.S. Capitol on January 7, 2021, in Washington, DC. /Getty

Trump has done precisely this throughout his presidency, warning that without him in office, Americans will "have to learn to speak Chinese." At his rallies, he routinely champions the Second Amendment and rails against nonwhites, telling congresswomen of color to "go back" to the "totally broken and crime-infested places from which they came." He has urged his followers to manhandle opposition demonstrators, and to throw them out – not just from his rallies, but from the country itself. He has praised white supremacists as "very fine people." After his Confederate-flag-waving mob stormed the Capitol, he said, "We love you, you're very special."

The Republican Party fully backed Trump and his politics of incitement right up until the afternoon of January 6, when the mob swarmed the Capitol. But Republican leaders' fealty to Trump has not been driven merely by his hold on the party's base. Trump represents the essence of the American right. His assigned role has always been clear: to stack the judiciary, cut taxes for corporations and the rich, and push back against demands for social spending and environmental regulation, all while inciting the baying mob to fight "socialism."

January 6 went awry because the white mob turned on the white politicians themselves. This was unacceptable, but not unpredictable. Trump has repeatedly told his followers that they are losing America; and the Republicans' loss of Georgia's two Senate seats to an African-American and a Jew doubtless added to the rage.

Trump may have been unusually crude in his race-baiting, but his approach has been perfectly in keeping with that of the Republican Party at least since the party's "Southern strategy" in the 1968 election, in the wake of that decade's civil-rights legislation. Until last year, Trump was getting the job done for his party's plutocrat donors, bosses, and business allies. The 2020 election was his to lose – and lose it he did. But the reason was not that he was too racist toward people of color; it was that he was overwhelmingly malevolent and incompetent in the face of a killer pandemic.

In the grand sweep of history, America is indeed turning the corner on its past of racism and white mob violence. Barack Obama was elected to the presidency twice, and when Trump won in 2016, he received fewer votes than his opponent. Between Kamala Harris's election as vice president and Georgia's Senate elections this week, there is strong evidence to show that America is gradually shifting away from white oligarchic rule. By 2045, non-Hispanic whites will constitute only around half of the population, down from around 83 percent in 1970. After that, America will become a "majority-minority" country, with non-Hispanic whites accounting for around 44 percent of the population by 2060.

For good reason, younger Americans are more cognizant of racism than previous generations were. The Trumpian virulence on display at the Capitol may have been dismaying. But it should be seen as a desperate, pathetic last gasp. Fortunately, the America of racist white rule is receding, if still far too slowly, into history.