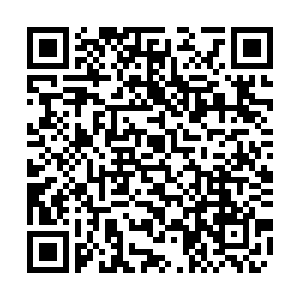 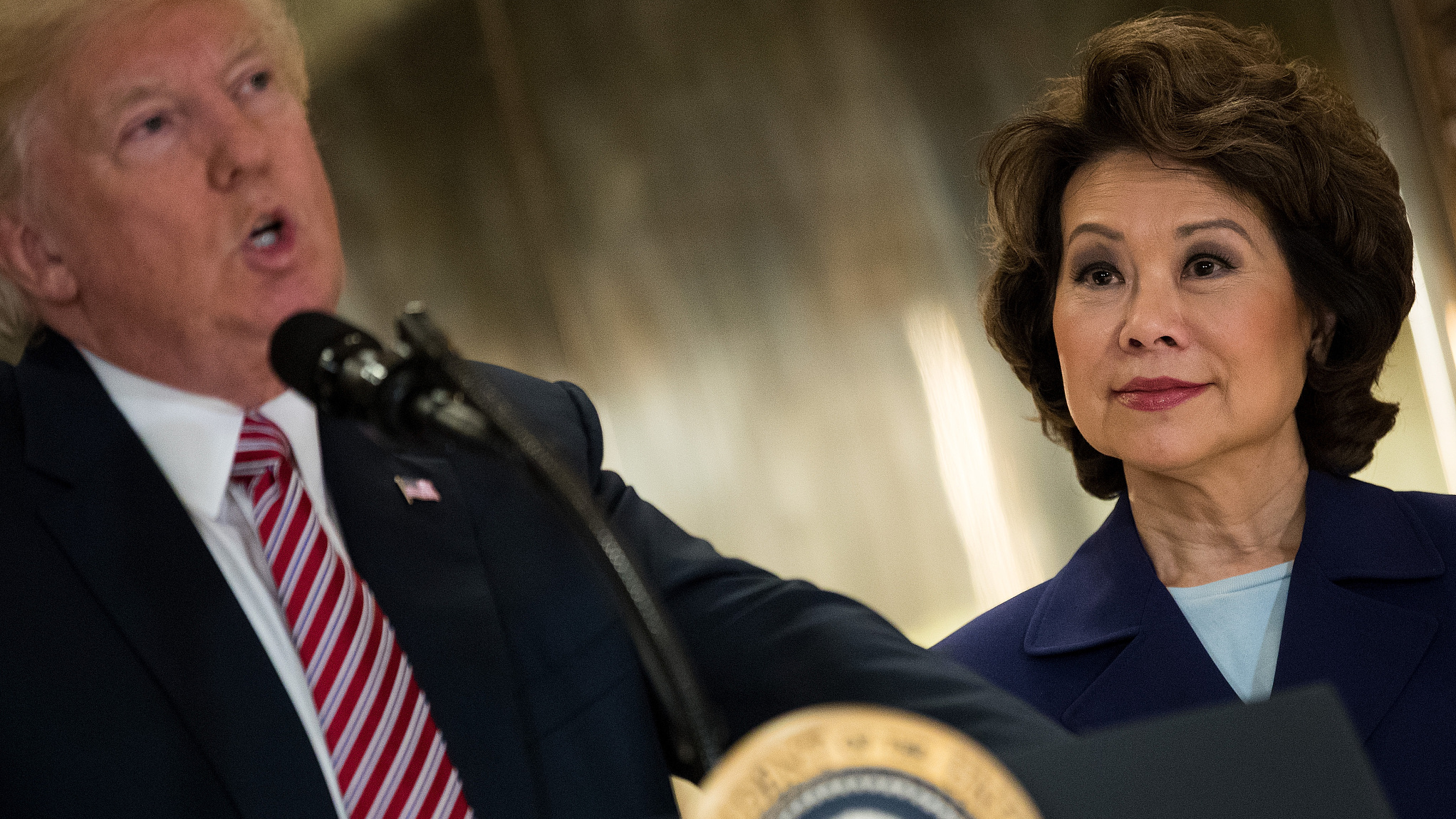 They stood by him through four tumultuous years. But even for Donald Trump's few remaining loyalists, Wednesday's mob attack on the U.S. Capitol, which the outgoing president is accused of inciting, crossed the line.

On a day that will go down as one of the darkest in America's history, Trump's inner circle began to disintegrate as White House officials scrambled for the exit, two weeks before he is due to hand power over to President-elect Joe Biden.

The Secretary of Transportation Elaine Chao, also the wife of Senate Majority Leader Mitch McConnell, was the first cabinet member and the most senior official to resign in connection with the riots.

"Yesterday, our country experienced a traumatic and entirely avoidable event as supporters of the President stormed the Capitol building following a rally he addressed," Chao said in a statement, adding that the event had "deeply troubled" her in a way that she "simply cannot set aside." 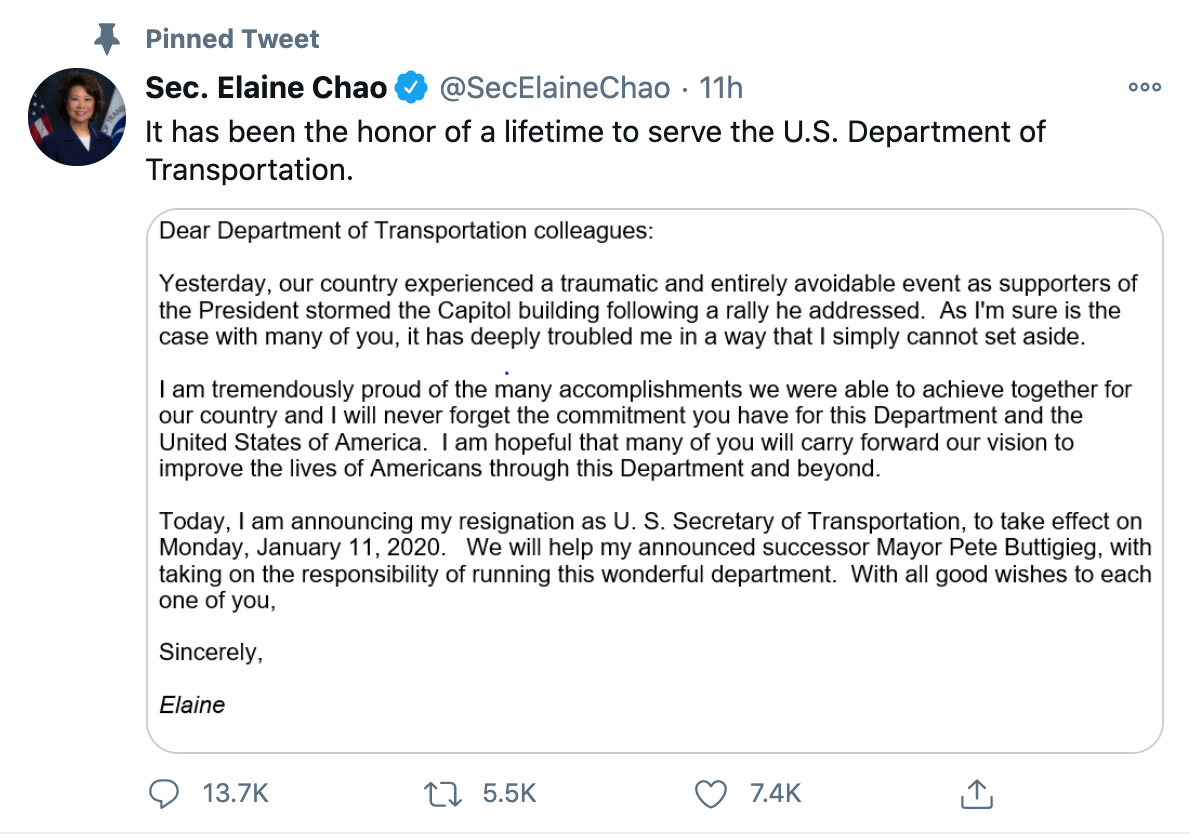 A political veteran, Chao is among the few in the Trump administration with extensive experience, having served in both Bush administrations. In 2017, she became the first Asian American woman to be appointed to the president's cabinet.

Chao had remained a steadfast supporter of Trump while largely managing to distance herself from the president's dramas throughout his term, even at times when her husband Senator McConnell and Trump didn't see eye to eye. "I stand by my man – both of them," Chao famously remarked after the Charlottesville incident in 2017.

But the mayhem on Capitol Hill marked a watershed moment for the power couple's relationship with the sitting president. Chao's departure came after McConnell pressed ahead with lawmakers in Congress to confirm Biden's victory on Wednesday, squashing Trump's claims of a stolen election.

Calling Trump supporters who stormed the Capitol an "unhinged crowd," McConnell condemned the riot as a "failed insurrection." Even as many Republicans are too afraid to anger Trump's base, some decided they can no longer afford to turn a blind eye to the assault on U.S. institutions. 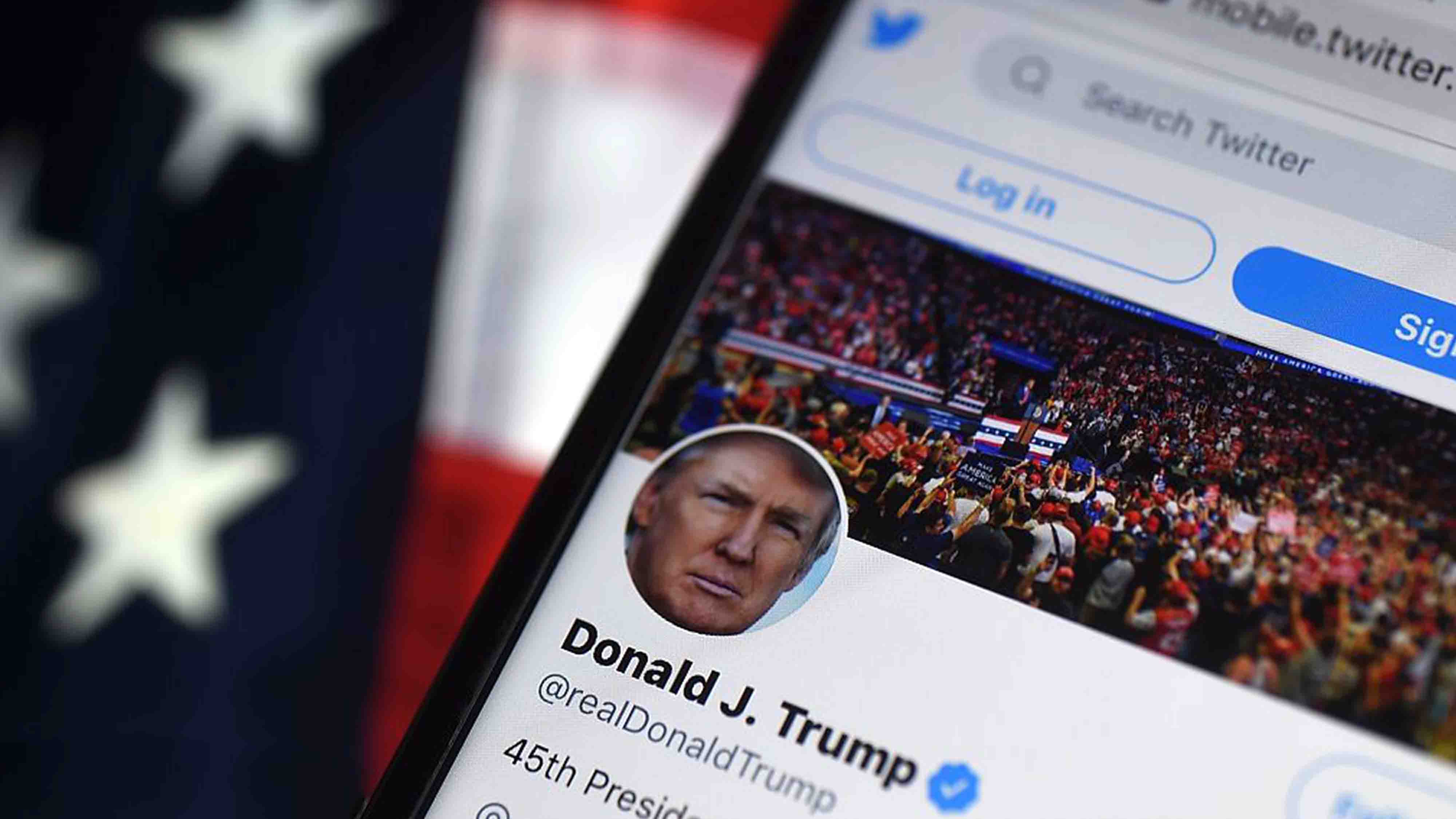 In her resignation letter to Trump, Devos called what happened on Capitol Hill "the inflection point" that drove her to quit. She also called the attack on the Capitol "unconscionable."

The resignation of Devos came as a shock to many, since she was one of Trump's strongest allies in the Cabinet, and among the few cabinet members who served throughout his term.

The nomination of Devos, a staunch supporter of school choice initiatives, in 2016 received the strongest opposition in Congress among all cabinet nominees, with many accusing her of excessive deregulation and being at odds with the ideal of public education. Amid school closures during the pandemic, she joined Trump in threatening to withdraw funding from schools that did not reopen for in-person classes. 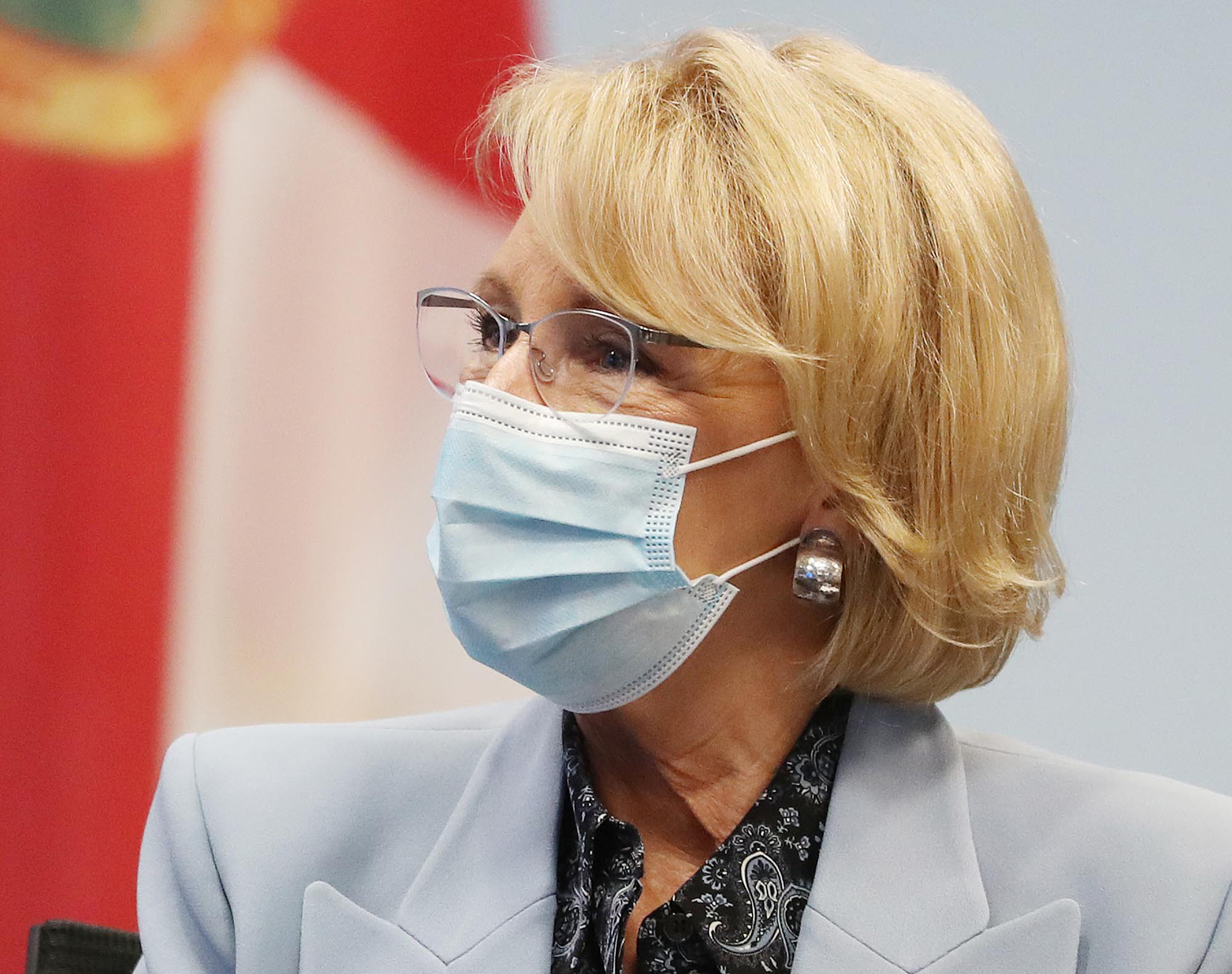 The cabinet secretaries' walkouts followed similar moves in light of the violent attack on Capitol Hill by at least half a dozen Trump administration officials, including chief of staff to the first lady Stephanie Grisham, deputy national security advisor Matthew Pottinger, acting chairman of the Council of Economic Advisers Tyler Goodspeed, assistant secretary for the Department of Health and Human Services Elinore F. McCance-Katz and former chief of staff Mick Mulvaney.

"Those who choose to stay, and I have talked with some of them, are choosing to stay because they're worried the president might put someone worse in," Mulvaney said during an interview on CNBC.

The Cabinet members' resignations have been faulted by some as purely symbolic gestures. "I personally think Charlottesville was worse than what happened yesterday and if you didn't resign after that, it's kind of a chickenshit move to do it 14 days before the transfer of power," a senior Trump administration official was cited in a Politico report as saying.

"Elaine Chao who stood by Trump's side and didn't resign as he heaped praise on neo-Nazis over three years ago. Spare me the 'troubled' stuff now. Too late." NBC host and political analyst Mehdi Hasan tweeted in response to Chao's resignation statement.

Meanwhile, there are growing calls for Trump to be removed from office either through invoking the 25th Amendment to the U.S. Constitution or impeachment by Congress, as Democrats and some Republicans blamed him for inciting the riots on Wednesday. 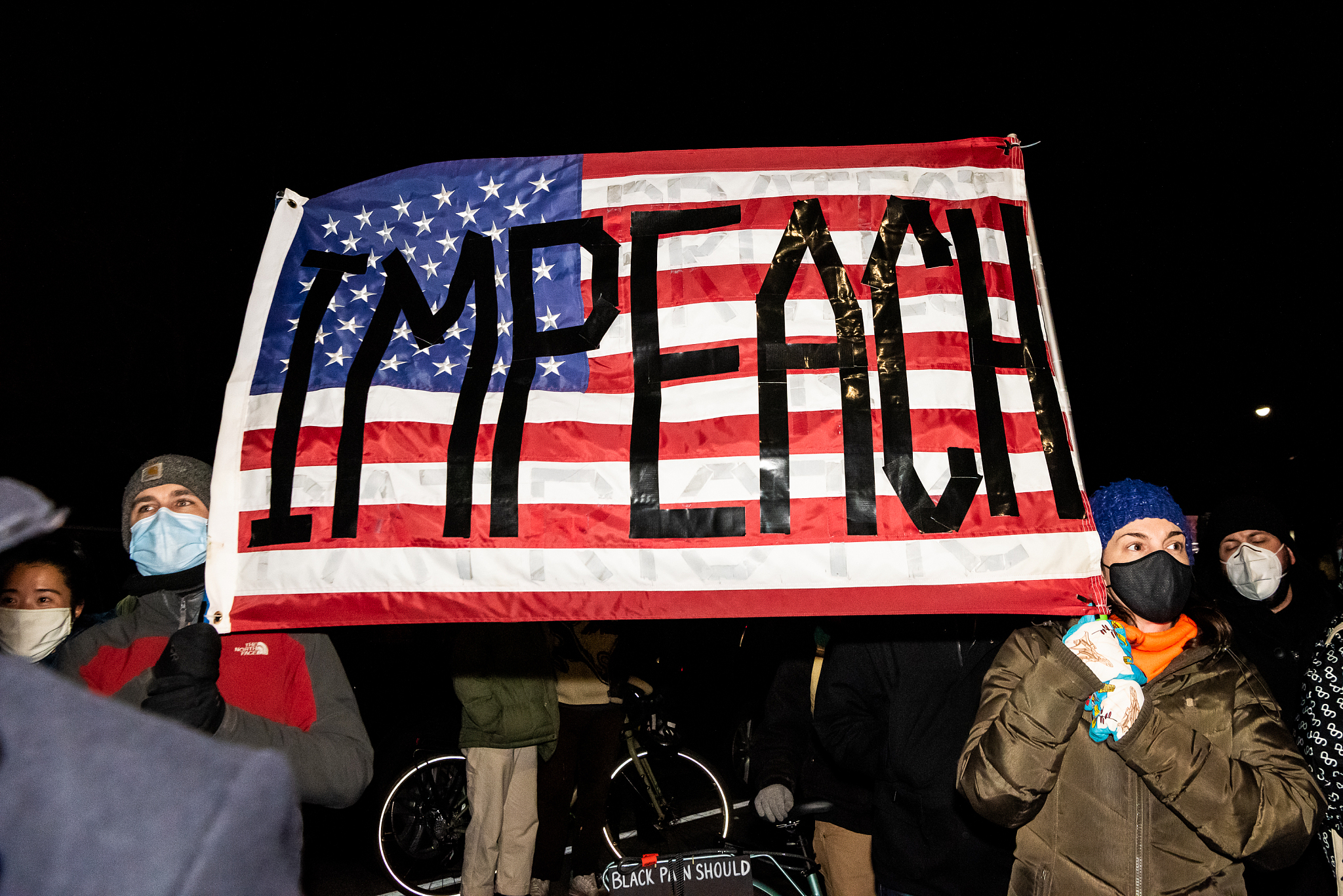 A day after Trump supporters stormed the U.S. Capitol, protestors take to the streets in New York demanding his impeachment, January 7, 2020. /CFP

A day after Trump supporters stormed the U.S. Capitol, protestors take to the streets in New York demanding his impeachment, January 7, 2020. /CFP

Some critics said that the Cabinet members resigned because they would not want to stay on to invoke the 25th Amendment to remove the president. "Elaine Chao and Betsy DeVos aren't taking some brave moral stand by resigning now. They knew how terrible he was. By getting out now, they avoid the 25th Amendment debate. They're enabling Trump, not standing up to him," Citizens for Ethics, a nonpartisan U.S. government ethics and accountability watchdog organization, said on Twitter.

In a hastily released video message on Thursday, Trump for the first time acknowledged Biden's election victory and called for a smooth transition of power, while repeating the same claims that spurred his supporters to march to Washington in the first place.

"This morning I would have told you the Republican Party is in shambles because of Donald Trump. Now the entire country is," a senior Trump adviser was quoted by Politico as saying on Friday.

With less than two weeks left until Biden's inauguration, Trump is becoming more isolated and alone. Whatever legacy the 45th hoped to leave, it will be tarred by what happened on the Capitol this week.