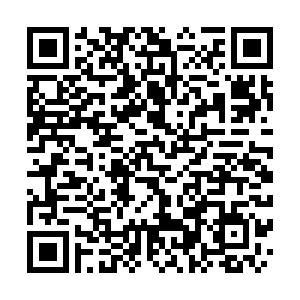 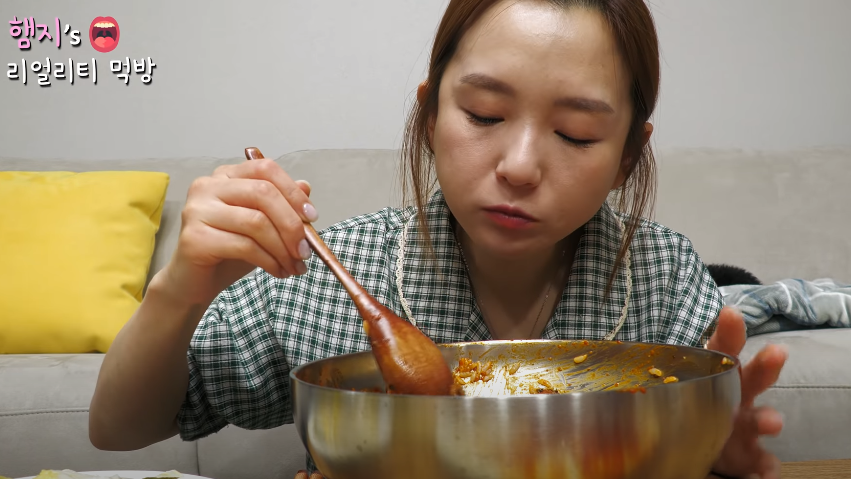 A popular South Korean Mukbang host has found herself in a pickle with her fans in China after being sucked into a months-long spat over kimchi between the two countries' internet users.

Hamzy posts on social media videos of herself eating while making loud noises of chewing and swallowing in what is known as ASMR Mukbangs. She's a well-known figure in this genre which marries two of the biggest online trends: eating broadcasts or Mukbangs and ASMR videos which focus on auditory experiences through a variety of sounds to trigger a pleasurable sensory response among viewers. 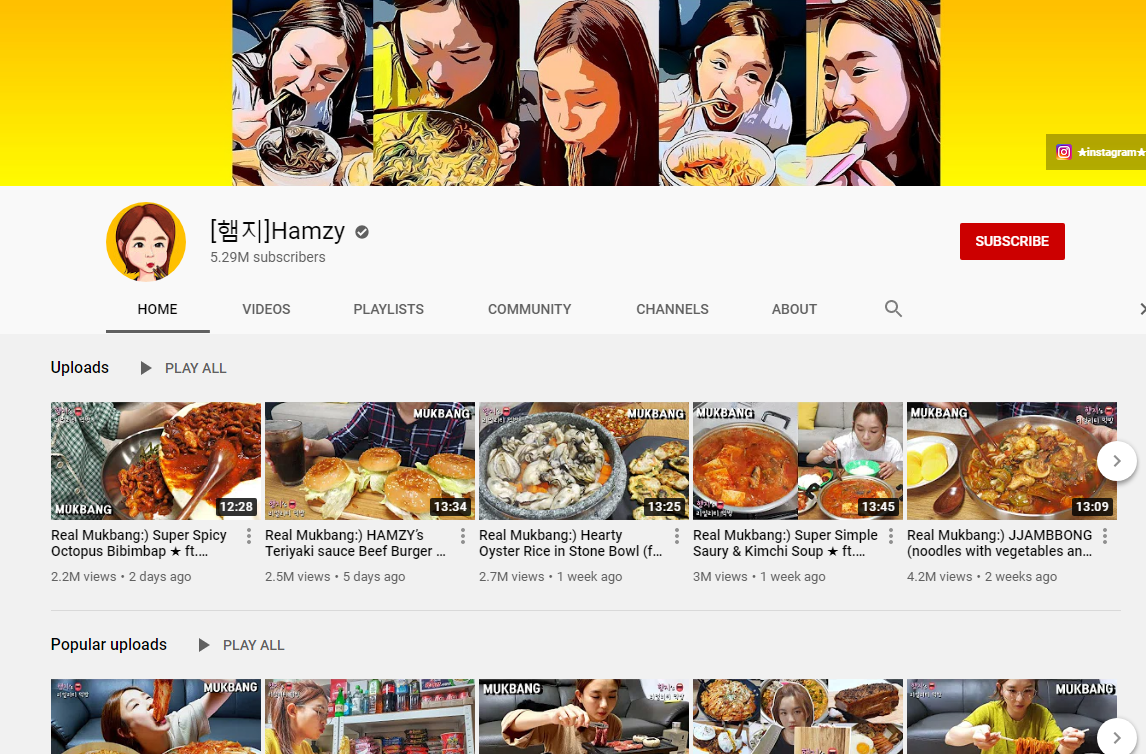 On YouTube, the South Korean has amassed 5.3 million followers since she started uploading videos of herself slurping noodles and sinking her teeth into burgers since mid-2019. Hamzy is equally big on Chinese social networks, boasting some 3 million followers on Weibo, a Chinese twitter-like platform, and over 1 million on each of Little Red Book, a social shopping app, and bilibili, a video sharing platform.

But the vlogger has come under fire by her Chinese fans over the weekend after being caught in the crossfire of an ongoing row over fermented cabbage.

The food fight began last November when the International Organization for Standardization (ISO) issued regulations for the production of pao cai or Chinese salted fermented vegetables. Pao cai in Mandarin also refers to kimchi, the culinary pride and joy of South Koreans. Despite ISO specifically noting that "the document does not apply to kimchi," confusion over the name soured the mood of South Korean online users, who accused China of "cultural theft" much to the discontent and protest of their Chinese counterparts. 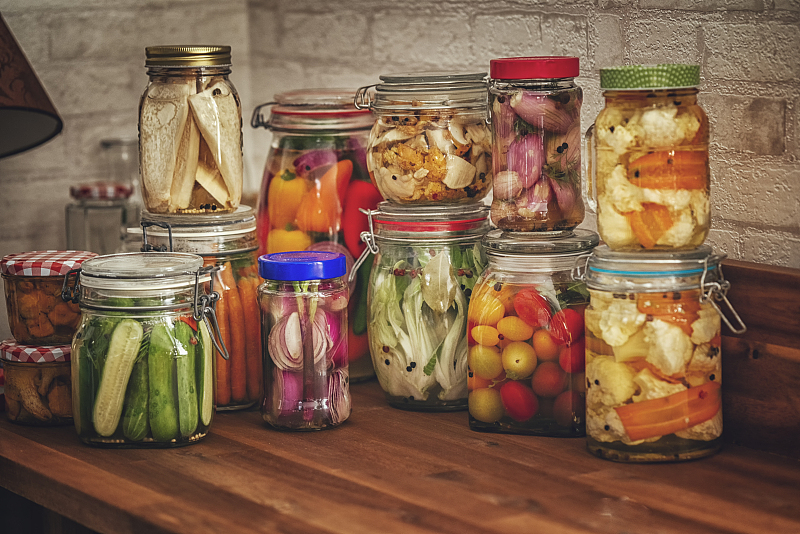 In Hamzy's clip in question, uploaded on January 15, the YouTuber pairs her pork bibimbap, a traditional Korean rice dish, with what she referred to as "white kimchi." Chinese netizens, however, took issue with that designation because the fermented cabbage featured in the video looked similar to what Chinese food vlogger Li Ziqi had made in a clip she posted just days earlier.

Li's video, titled "The life of white radish," was uploaded on YouTube on January 9. It shows her preparing different types of fermented vegetables. Interestingly, the Chinese social media influencer also received flak from South Korean users for including a kimchi-like preparation while using the hashtag #ChineseFood for the video. 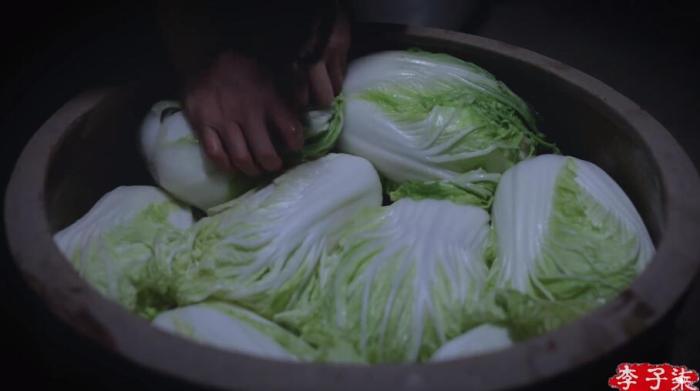 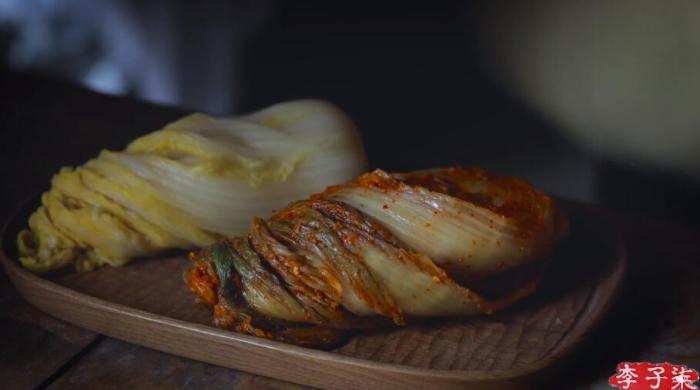 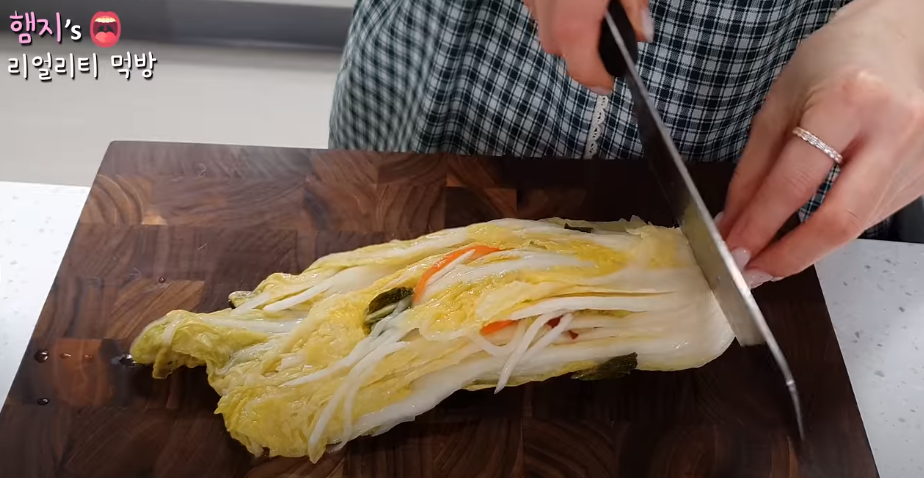 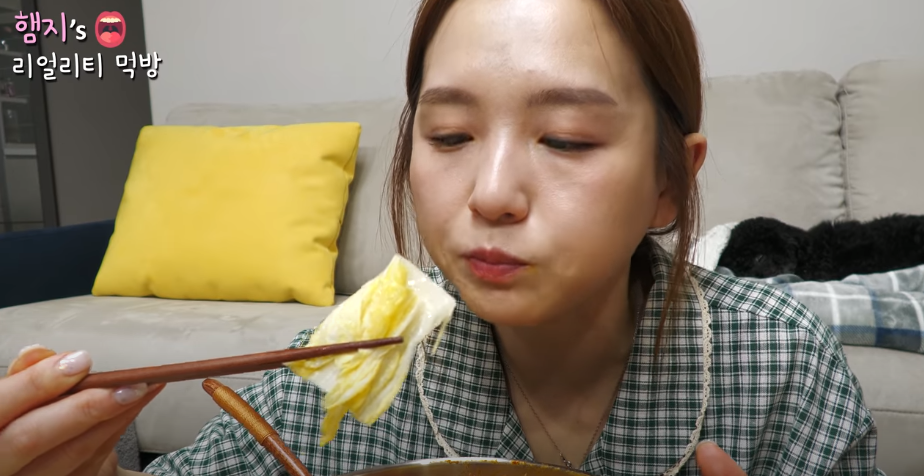 Hamzy holds fermented cabbage close to her mouth during a Mukbang. /YouTube screenshot

Hamzy holds fermented cabbage close to her mouth during a Mukbang. /YouTube screenshot

Hamzy labeling the fermented cabbage as kimchi was perceived by Chinese netizens as an assertion that this pickled dish is South Korean instead of Chinese.

To make matters worse, critics pointed out that the South Korean vlogger had liked comments posted under her YouTube video that insulted Chinese people. 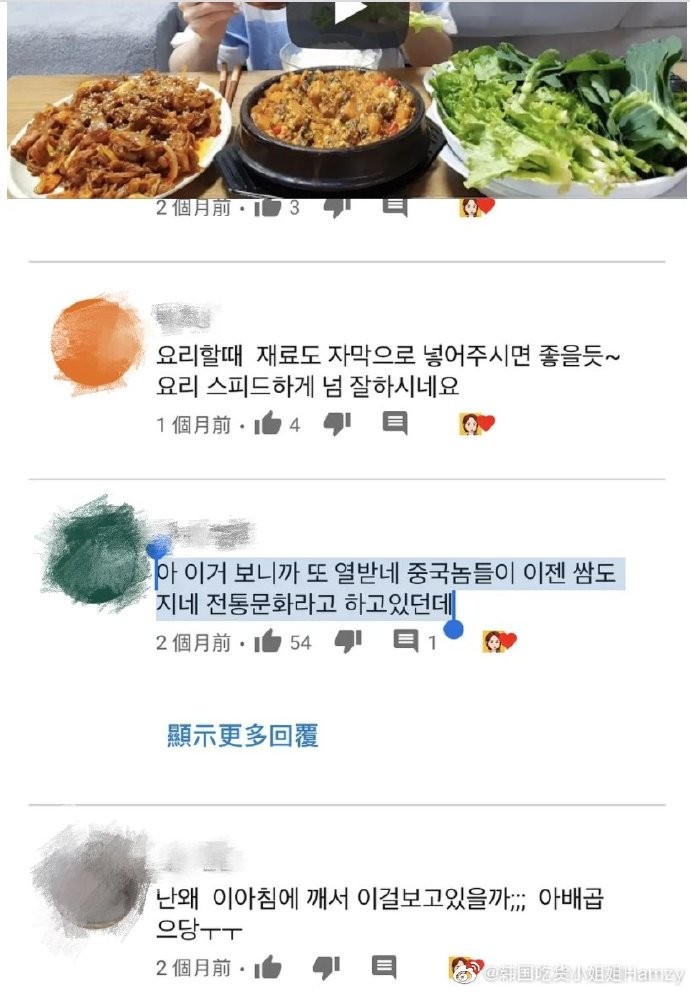 One comment, apparently from a South Korean user, reads "I'm so angry with the Chinese guizi. How can they consider ssambap as their traditional food?" referring to a lettuce-wrapped rice dish. "Guizi" is a derogatory term in Mandarin that means devilish or evil people.

Soon, angry Chinese netizens began calling for Hamzy to be boycotted and her videos be removed from Chinese platforms. 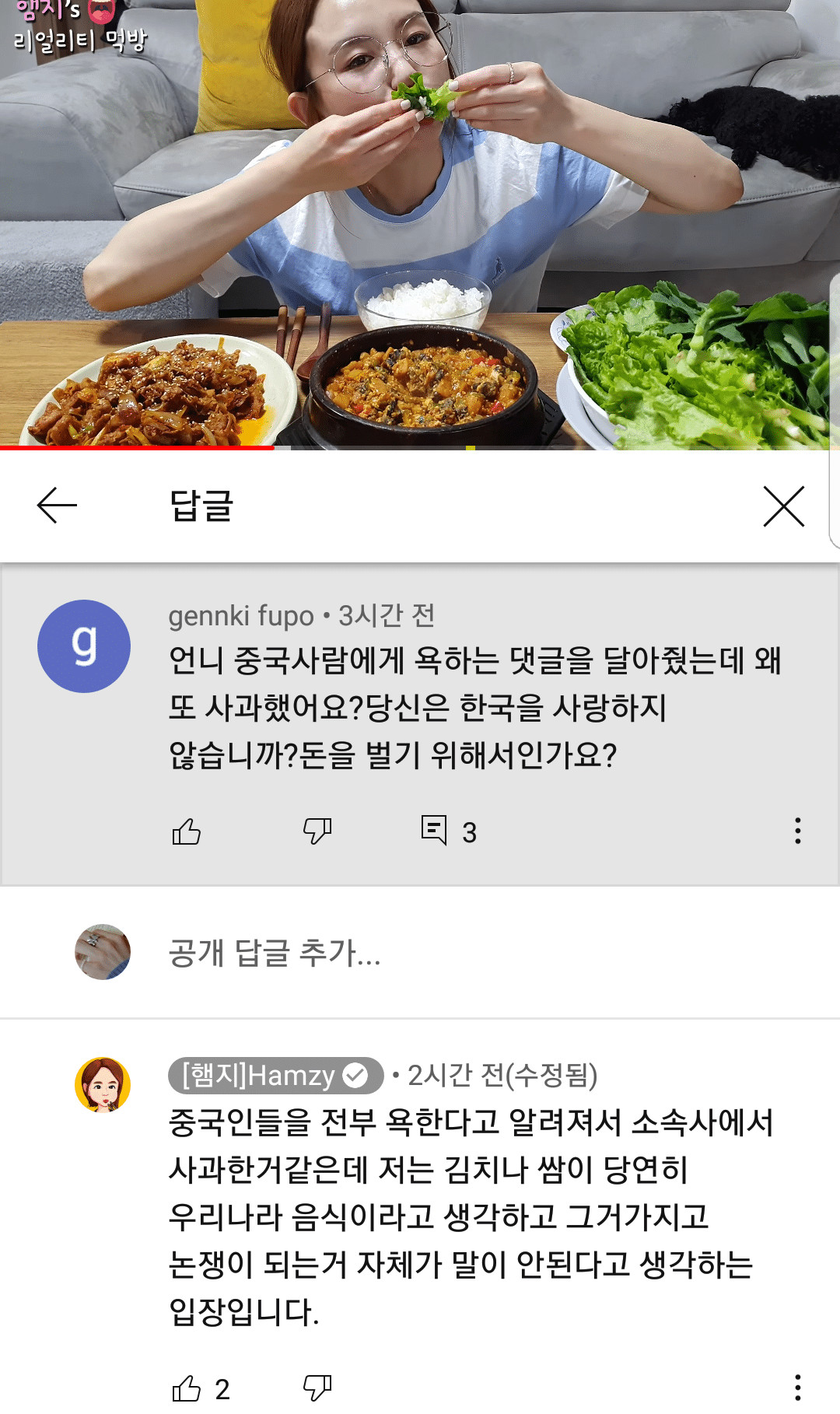 Hamzy said on YouTube that her agency had asked her to make apologize to angry Chinese netizens over the fermented cabbage controversy. /YouTube screenshot

Hamzy said on YouTube that her agency had asked her to make apologize to angry Chinese netizens over the fermented cabbage controversy. /YouTube screenshot

Hamzy on Saturday issued an apology during a livestream on Weibo and said liking the offensive comment was unintentional. Her regretful comments angered South Korean users on YouTube and the internet celebrity sought to calm them, claiming that her agency had asked her to apologize to the Chinese fans, who were then enraged at the seeming hypocrisy of the YouTuber.

On bilibili, a Chinese video sharing platform similar to YouTube, Hamzy's followers dropped from 1.8 million to 1.4 million overnight. And on Sunday night, the Chinese company that represents Hamzy in China announced it is discontinuing business with the vlogger.

"We believe that Hamzy had no intention of hurting her Chinese fans. That is why we worked together with her to apologize to Chinese netizens. However, without letting us know, Hamzy responded to comments that are unfriendly to Chinese netizens, which hurt Chinese netizens again," Shanghai Suxian Advertising Media Co., Ltd. said in a statement.

Hamzy's videos on her official Chinese social media accounts have since been removed.