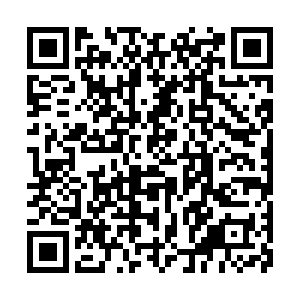 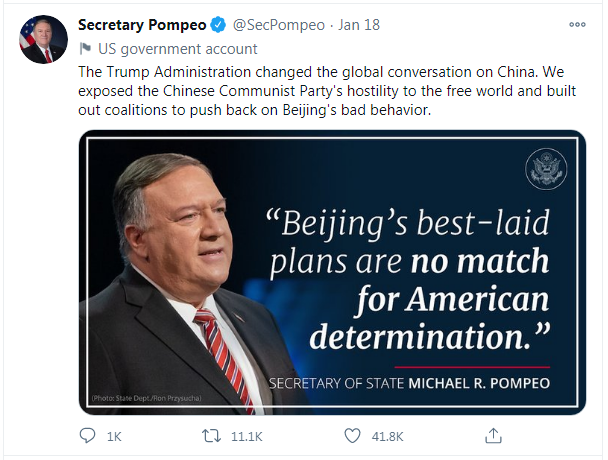 Screenshot of the U.S. Secretary of State Mike Pompeo's tweet on China, January 18, 2021.

Screenshot of the U.S. Secretary of State Mike Pompeo's tweet on China, January 18, 2021.

When the outgoing U.S. Secretary of State Mike Pompeo talked openly about his time as director of the Central Intelligence Agency (CIA), from 2017 to 2018, he said, "we lied, we cheated, we stole." Out of character to the characteristically pugnacious Pompeo was his joviality as he spoke these ignominious words. Shamefully, this candid remark was followed by cheering and clapping by the audience at Texas A&M University.

This indecent bragging demonstrates Pompeo's blind conviction in American exceptionalism as well as a sense of personal moral degradation. Clearly, Pompeo believes lying, cheating, and stealing are all permissible if it's for the sake of what he believes are the U.S.' interests. The fact that he so unabashedly admitted this fact proves that power, imbued in American exceptionalism, has clearly corrupted his sense of integrity.

Unfortunately, Pompeo's "lie, cheat and steal" type remarks have been standard fare throughout his time under President Donald Trump. Despite Trump's reign in its death throes, Pompeo nevertheless seems intent to go out in a blaze of odious tweets that reaffirm his outdated Cold War mentality.

In regards to the CPC, Pompeo tweeted that "the CCP (meaning the CPC) is the central threat of our time" and "we exposed the Chinese Communist Party's hostility to the free world." Pompeo clearly has a very narrow view of what has been achieved under the stewardship of the CPC.

In China, extreme poverty has finally been wiped out and the battle against relative poverty continues. Internationally, the Belt and Road Initiative has brought together a coalition of well over 100 countries and regions who are now working together on infrastructural projects that will finally bring development to the South. 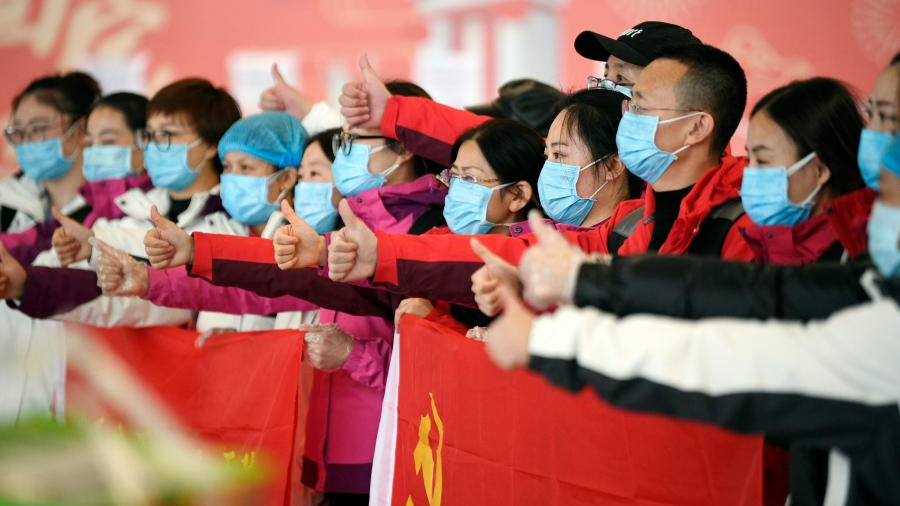 Members of a medical team attend a ceremony before their departure to Wuhan of Hubei Province to aid the COVID-19 control efforts there, at Hedong International Airport in Yinchuan, northwest China's Ningxia Hui Autonomous Region, January 28, 2020. /Xinhua

Members of a medical team attend a ceremony before their departure to Wuhan of Hubei Province to aid the COVID-19 control efforts there, at Hedong International Airport in Yinchuan, northwest China's Ningxia Hui Autonomous Region, January 28, 2020. /Xinhua

The fact is the threat, if any, China presents to the U.S. is that its policies threaten to bring about greater equality between the developing and the developed world. Something the U.S., despite having military bases in around 80 countries, has been unable to achieve.

Indeed, a more developed world will mean less opportunity for the U.S. to wantonly invade and overthrow governments. However, surely for anyone who cares about the global community as a whole and not just the U.S., this is a good thing.

While Pompeo tweeted that when combating the China threat "we worked with allies and partners in the EU and Asia on the transatlantic China dialogue." However, to assume the EU and Asian countries see China as a threat is too severe and goes against recent history.

States around the world may see China as a competitor but it is also a partner. The Regional Comprehensive Economic Partnership (RCEP) between China, the Association of Southeast Asian Nations (ASEAN) as well as Australia and New Zealand which was signed only a couple of months ago shows that when it comes to China's place in the world, Asia and Oceania are, in fact, bullish on China's rise. The recent EU-China investment deal further demonstrates that with continuous cooperation and dialogue great things can be achieved and ideological differences can be overcome.

The fact is the new reality facing the world is one of greater multi-polarity. It is a world where there is no room for the cold war dogma of the last century.

As such, it is a world where we must strive to overcome our ideological differences. There is no room for the imperial mindset of old that denies the legitimacy of others because their governing systems or way of life are different. To overcome these differences, we need more dialogue and less frenzied tweets.

Pompeo tweeted correctly that "the CCP is a Marxist-Leninist party" but he is undoubtedly wrong when he said that the party "has made clear its hostility to our values and way of life." China in fact has no wish to import its system to others. Indeed, China upholds the principle of non-interference which is why China did not cheer on the recent protesters in Washington. Ludicrously, it is Pompeo who has made clear his hostility to China's values and way of life.

What might be behind Pompeo's double standards? One could easily say, considering his "lies, cheat and steal" comments that his tweets hardly contain integrity.

On the other hand, he is an evangelical conservative Christian who tweets verses from the Bible. Recently, along with the anti-China tweets he tweeted the verse from the Book of Mark: "And he said unto them, Go ye into all the world, and preach the gospel to every creature."

As such, it is likely that Pompeo has thought himself to be in a frenzied righteous battle against "evil" where China plays the role of the villain.

Indeed, much of American exceptionalism, which Pompeo subscribes to, such as the ideology of manifest destiny, utilized religious zeal for hegemonic deeds such as dispossessing the Native American Indians from their lands.

The problem is we are living in a different world today. It is no longer acceptable to carry out international relations where one fervently denies the goodness and the rights of others and where one's own civilization, despite its failings at home and abroad, conveniently takes on the characteristics of righteousness.

In a world where the South is on the rise and where Africa, Asia, and South America will have their own ideology, their own way of seeing the world, their own history, and their own governing system we need less preaching and tweeting and more listening and speaking.

For Pompeo a religious man who has admitted to sins such as lying, cheating, and stealing he might want to keep the verse from the Book of John in mind, "Let he who is without sin cast the first stone."